Don’t Look Now, but ICE Is Deporting Some Central American Families by Air

Catch-and-release continues for others, but secretive program seems to be reducing the flow at the border

ICE Air Operations is capable of facilitating the removal of alien nationals from any location in the continental United States to anywhere in the world via commercial airline or charter aircraft, ensuring their safe and humane return to their countries of origin.

MCALLEN, Texas — At this city’s main airport and others in South Texas, President Joe Biden’s Department of Homeland Security is carrying out secretive and escalating air deportations of tens of thousands of migrant border-crossers, a high percentage of them evidently Central American women and children who were supposed to be protected from deportation and, more recently, Haitians.

The air deportation operations to distant home countries, a tactic that has proven highly effective at deterring follow-on illegal migration, appear to have ferried home significant numbers of migrants who recently crossed the southern border illegally — probably well in excess of 65,000 from August through October and thousands more in November, a Center for Immigration Studies (CIS) analysis of aircraft flight data, direct observation at the McAllen airport, a pilot interview, and other public information indicate.

That may represent a relatively small percentage of the roughly 565,000 total border encounters during this time frame, but merely a decent probability of air deportation flights home has long proven to hold real power to persuade migrants to stay home and especially not to risk fortunes in smuggling money on journeys that go nowhere. The flights, which began in August and have continued at a daily pace through November, happen to coincide with a third consecutive monthly decline in migrant border encounters in October (by a significant 30,000 drop from the September number) after skyrocketing every month from Biden’s election until the flights began.

The August through November flights seem likely to have contributed to those three monthly declines, though the question warrants more exploration. But U.S. Customs and Border Protection data shows that the nationalities with the biggest numerical declines were those who ended up on home country tarmacs messaging about their misfortune on social media: Haitians, Hondurans, and Guatemalans, a review of CBP data by nationality shows.

Beyond their impact on migrant decisions to avoid losing smuggling fee fortunes on trips that might end up back at square one, the fact that tens of thousands of non-Haitian migrant families are being deported aboard the flights holds implications for the ongoing national discussion about how to handle the mass migration crisis of 2021.

Many Americans — and Central Americans, too — might have believed the Biden administration was still legally paroling into the United States almost all migrant families who showed up at the border with at least one child. That was largely the case for the administration’s first six months, a political indulgence that rapidly drove the encounter numbers into historically high territory (1.7 million during fiscal year 2021) as families back home saw hundreds of thousands of predecessors quickly gain U.S. entry and felt emboldened to bet their own smuggling fees. The catch-and-release practice continues even now at a significant level.

But that’s no longer the whole story; the addition of deportation flights as a new factor to consider probably warrants a change in narratives on all sides, especially if the encounter numbers keep dropping.

A Hint at Numbers and Purpose

It’s unclear how many Central Americans the Biden administration has flown to home countries, how they were chosen, or what the intended purpose is. DHS has not released such information. ICE public affairs did not respond to CIS requests for information by publication time.

In August 2021, ICE Air Operations began carrying out the flights, often with chartered aircraft, after the Department of Homeland Security announced “expedited removal” flights would commence for “certain families who recently arrived at the southern border ... and do not have a legal basis to stay in the United States.” The DHS statement hinted obliquely that the aim of the flights was to persuade migrants from Central America, among the most populous of border crossers, to stay home on grounds that “irregular migration ... is especially dangerous for families and children.”

The flight orders also happened to come the month after a record-setting 213,000 border apprehensions (July) generated international headlines and, notably, low polling numbers for Democrats on the immigration issue as the 2022 midterm elections loom. Initial media reports indicated the first flights ran into Covid-19-related delays, but coverage of how the operation developed has mostly dried up in the months since.

In their fourth month now without any serious media attention, however, Biden’s embrace of deportation flights once favored by former President Donald Trump for their proven deterrence value seems to have escalated to several a day, six days a week, flight tracking data for several of the aircraft shows.

Many of the jets — but not all — appear to carry mainly the families with children mentioned in the DHS statement directly to Guatemala and Honduras and also to cities deep in southern Mexico like Tapachula and Villahermosa. The Mexican government, in a barely reported September agreement with the Biden administration, transports the arriving deportees by bus to Honduras and El Salvador.

But the numbers have grown by leaps and bounds judging by public flight tracking databases for several of the aircraft and by an anti-deportation group called Witness at the Border, which claims to track most ICE removal flights (and terms them “Death Flights”).

In August, however, the removal flights to foreign countries more than doubled to 99, then leapt again to a “stunning” 193 in September, the organization reported, attributing the increase to “the massive Haiti expulsion program” (to empty the Del Rio camp) as well as to new direct expulsion flights to Guatemala and to Tapachula and Villahermosa in Mexico.

The group reported another 139 removal flights for October, which together with September’s 193, by far ranked the highest in nearly two years, more even than during the latter half of the Trump administration.

If each flight held 150 migrants, the math shows that ICE Air flew somewhere in the neighborhood of 65,000 to home countries from August through October.

Flight tracking data shows the flights continued through November at a similar pace. Accounting for November, the number of migrants shipped by air from southern Texas since August would push close to 100,000.

An IAero Airways 737 jet registered as N529AU, which CIS saw parked at McAllen airport, flew more than 65 flights to southern Mexico, Guatemala City, and Honduras between August and the last week of November 2021, including 22 from November 1 through November 27 to Villahermosa and Tapachula, accounting for one about one flight per business day.

A Deafening Silence with a Political Motive

The administration has not seemed eager to advertise the extent to which deportation flights are filled with Central American families, perhaps foreseeing the kind of withering criticism it faced in September from liberal Democratic constituents, human rights organizations, and mass-migration advocacy groups over a Biden decision that month to fly thousands of Haitian migrants back to Haiti.

As the administration undoubtedly knew, those flights quickly deterred expansion of a huge migrant camp that formed in Del Rio, Texas, and made it possible to empty it quickly. But when those flights to Haiti were generating heated criticism among Democratic Party allies, little was mentioned that DHS was already well into its program of quietly flying thousands of other nationalities home, too. 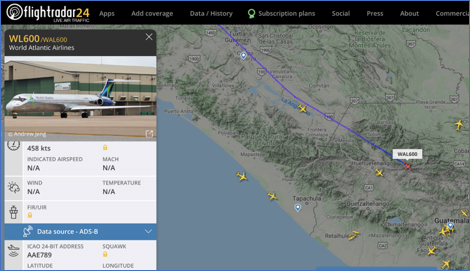 Screen grab from the website Flightradar24 showing the pictured jet en route from McAllen, Texas to Guatemala City on November 24, 2021.

As an example of the low-key way DHS carries out these flights, CIS observed one from McAllen’s airport the morning of November 20. Plain-clothed federal agents driving unmarked civilian trucks escorted more than 100 migrant women and their children from three chartered white buses — no migrant men were observed — through a restricted rear entry gate onto the tarmac and directed them up a mobile staircase into the belly of an idling World Atlantic Airlines jet whose public flight plan said it was heading to Guatemala City.

On two occasions, airport security was sent to warn CIS away from filming from a position on the opposite side of an airport fence and ICE agents once called McAllen police to intervene.

Schizophrenia in the White House, or Finally Evidence of Good Border News?

It’s easy to see why the administration wants to keep things quiet. For one, the flights stand at sharp variance with an early Biden decision to immediately suspend Trump carry-over flights under pressure from migrant advocacy groups that eventually got the same planes to deliver migrant families to American cities. Jump-starting operations that send tens of thousands of them home at even higher frequencies than before confusingly defies that program and other administration leniency policies, such as legally paroling in most arriving migrant families, and virtually ending deportations from the interior of the U.S.

One explanation that might help confused observers understand this contradictory ground situation — that the same planes flying migrants to interior U.S. cities are flying others to home countries — is that the policies reflect a White House riven with strife between open-borders advocates on the far left and pragmatists worried about how terrible poll numbers about the crisis might impact mid-term elections. That strife has been well reported.

But the fact that flights are happening in significant numbers — and appear at first glance to be at least partly responsible for starting to lower traffic at the southern border — indicates that the White House pragmatists may be starting to win this civil war.

To be sure, liberal Democrats will be outraged to know Biden is deporting so many Central American families aboard “death flights” they regard as cruel and inhumane. And border hawks who frequently assert that the administration has opened the border wide to all comers will need to alter that narrative knowing that tens of thousands are being flown home.

But if the true motivation for scaring aspiring migrants into staying home is to improve Democratic midterm election performances, border hawks can point that out and maybe even appreciate the border security dividend a bit.

If nothing else is gained, all sides should understand that deportation flights are one of the most effective deterrence tools in any White House arsenal, so much so that even the Biden administration will turn to them when desperate enough.