Zero Tolerance at the Border — for Cheese 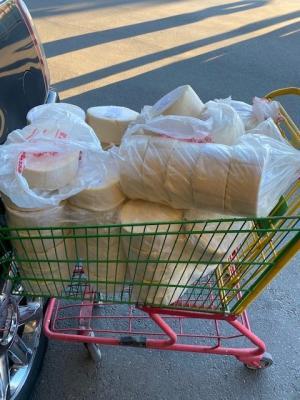 On September 7, CBP issued a press release celebrating the fact that its officers, working at the El Paso port of entry, had struck a blow for border enforcement that’s seemingly unprecedented for the Biden administration. They did not foil the illegal entry of a terrorist, drug cartel member, or human trafficker, however. They seized 50 wheels of undeclared cheese and fined the queso courier $1,000. If only Biden's DHS were as intolerant of violations of the Immigration and Nationality Act (INA) as it is of lactose.

Biden’s Southwest Border Failures. To put this seizure into context, it’s important to briefly recap the administration’s immigration failures at the Southwest border over last 19 months.

Between February 2021 and the end of July, Border Patrol agents have apprehended more than three million illegal entrants at the U.S.-Mexico line, setting new apprehension records in FY 2021 and in FY 2022 (the latter with two reporting months still to go).

While 53 percent of those migrants (just fewer than 1.7 million) have been expelled pursuant to CDC orders issued under Title 42 of the U.S. Code in response to the Covid-19 pandemic (orders first issued under the Trump administration), nearly 1.5 million others were processed for removal under the INA.

Of those nearly 1.5 million illegal entrants apprehended by Border Patrol agents at the Southwest border, more than 1.129 million were released into the United States through the end of June.

They were released even though all inadmissible aliens encountered by CBP at the border — including illegal migrants — are supposed to be detained until they are either granted immigration benefits or removed, under a congressional mandate that dates back more than a century.

Biden contends that those aliens were released because DHS lacks the space to contain them, but is that true? Here are the facts.

Under the Obama administration in FY 2016, CBP encountered more than 492,000 aliens subject to removal at the Southwest border.

Some 57 percent of those aliens were detained throughout their proceedings (again, as required by law), 25 percent were detained for a period and then released (many of them likely adults travelling with children in family units, who by court order must be released in 20 days), and just 18 percent were never detained.

In FY 2021, CBP encountered 528,000-plus aliens at the Southwest border who were processed for removal, as opposed to being expelled under Title 42. The Trump administration followed the CDC mandate to expel illegal migrants much more forcefully than Biden has, and thus just 5 percent of those aliens were processed for removal in lieu of expulsion prior to February 2021, Biden’s first full month in office.

Just 10 percent of those migrants encountered at the Southwest border in FY 2021 and processed for removal remained in detention as required by law, while 26 percent were detained and released, and a whopping 64 percent were never detained.

While this suggests that Biden isn’t trying to comply with the congressional detention mandate, here’s even stronger proof: At the same time Border Patrol agents at the Southwest border have already set an all-time record for apprehensions of illegal entrants in FY 2022, the White House is asking Congress in its FY 2023 budget request to slash the number of alien detention spots from 30,000 to 25,000, and to eliminate funding for family detention.

Speaking of the FY 2023 budget, the president is asking Congress for $154 million next fiscal year to facilitate the transportation and relocation of those released illegal migrants throughout the United States, and has recently asked for additional funding over and above the $150 million that Congress has funded for those efforts for this fiscal year.

Those funds flow to various NGOs throughout the country through FEMA’s Emergency Food and Shelter grant program — which was created under the Reagan administration in 1987 to care for the hungry and homeless, with a focus on the handicapped, elderly, veterans, and Native Americans who are down on their luck. It appears that charity no longer starts at home, but rather at the border.

CBP explains that early in the morning of September 6, a female U.S. citizen driving a 2011 GMC Yukon presented herself for inspection at the Paso Del Norte border crossing.

Solemnly, the port director explained: “Travelers can import cheese commensurate with personal consumption levels. ... A few wheels would generally be fine but not 60. It was undeclared and that amount would be a commercial quantity and additional reporting requirements would apply.”

I understand that some people are fondue fanatics, but I must concur with that sober assessment. The citizens of this Republic — to say nothing of our hardworking domestic dairy cows — can sleep more soundly knowing our country has been spared from this dastardly dairy deception.

A Few Harsh Facts. All of this would be humorous were it not for a few harsh facts. First, while cheese seizures at the Southwest border may be up in FY 2022 (official statistics are not available), drug seizures at the ports are way down, even as U.S. overdose deaths have exceeded 100,000 annually and are increasing.

As I explained on August 23, the most likely reason why port drug seizures are down is because cartels and smugglers have concluded it’s easier and safer to move illicit narcotics over the Southwest border between the ports, past Border Patrol agents who are too overwhelmed processing, transporting, caring for, and often releasing thousands of illegal entrants daily to otherwise secure the border from drugs.

Perhaps the unnamed driver of the 2011 Yukon should try rafting her wheels of cheese across the Rio Grande the next time.

Second, the same CBP media shop that trumpeted this cheese seizure still has not released any official information on a September 1 incident in which at least nine people drowned in that border river during an illegal entry attempt.

It was only because I was looking for follow-up on those deaths that I found the cheese release. The disconnect between glowing pronouncements about food seizures and a curtain of silence on drowning deaths is jarring, suggesting that the Biden administration has something to hide at the border (it does).

The same DHS that is dogged in enforcing agricultural restrictions is completely ignoring its statutory mandate to otherwise attain “operational control” of the Southwest border, defined as “the prevention of all unlawful entries into the United States, including entries by terrorists, other unlawful aliens, instruments of terrorism, narcotics, and other contraband”.

The cheese in this tale constitutes “contraband”, and it’s well and good that DHS has that part down, but it’s still failing to stop the illegal entries of aliens. Even as Border Patrol has set a new yearly record for migrant apprehensions, an estimated half-million other illegal entrants have successfully evaded agents and made it into the United States in FY 2022. Who they are and why they’re coming is anybody’s guess.

One final point. A separate CBP press release advises that the agency will be temporarily halting vehicle traffic at Laredo’s Juarez-Lincoln Bridge on September 11th, as part of the “21st Annual Remembrance Ceremony to honor the 9/11 attack victims”.

It‘s appropriate to honor those who lost their lives on 9/11. That said, it would be a much more fitting tribute to the dead to prevent future terrorists from illicitly entering to kill untold numbers more. Biden’s border policies, however, are straining CBP to the breaking point, and undermining agents’ ability to protect the homeland from terrorists, criminals, and drugs. Perhaps DHS leadership should remember what “homeland security” means, and why that department was created.