Mexican President Thanks Biden — For Not Building the ‘Wall’ 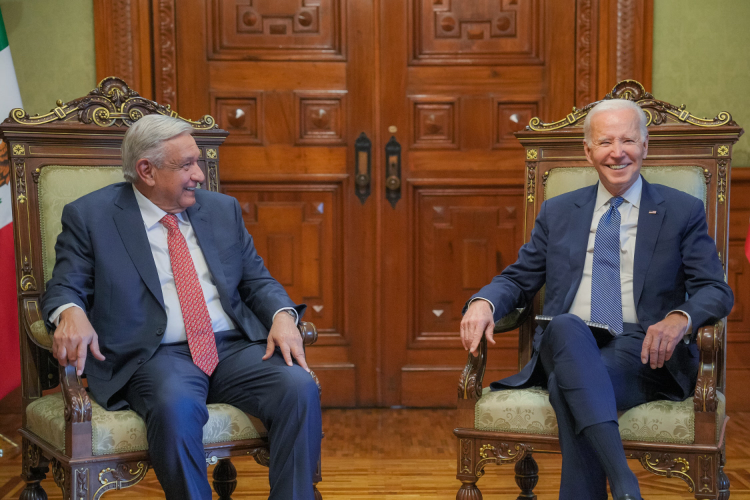 President Biden was in Mexico City this week, discussing regional issues with Mexican President Andrés Manuel López Obrador (popularly known as “AMLO”) and Canadian Prime Minister Justin Trudeau. In remarks at that meeting, AMLO thanked Biden for being “the first president of the United States in a very long time that has not built even one meter of wall”. Rep. Mark Green, M.D. — the new chairman of the House Homeland Security Committee — may not be so grateful.

A Brief History of Border Wall Construction Pre-Trump. AMLO did at least have his facts straight.

Scattered barriers of one sort or another have dotted the Southwest border since even before the Border Patrol was established in 1924, but as a modern organized effort border barrier construction dates to the early 1990s.

First, in 1991, engineers from the U.S. Navy replaced a chain-link fence separating San Ysidro, Calif., from Tijuana, Mexico, with a 10-foot-high barrier of corrugated steel surplus aircraft landing mats. That seven-mile barrier was later extended to 14 miles by the U.S. Army Corps of Engineers.

Next, in 1993, the then-Border Patrol chief in the El Paso sector, Silvestre Reyes, repaired a dilapidated fence in that Texas city’s downtown, and extended it outward as part of “Operation Hold the Line”.

Border barriers then became a part of the INS’s 1994 “Southwest Border Strategy”. In the Illegal Immigration Reform and Immigrant Responsibility Act of 1996 (IIRIRA), Congress gave its imprimatur to the idea, directing DOJ and the old Immigration and Naturalization Service (INS) to “take such actions as may be necessary to install additional physical barriers and roads in the vicinity of the United States border to deter illegal crossings in areas of high illegal entry into the United States”.

Still, according to GAO, there were just 76 miles of fences and other barriers at the Southwest border, with plans to erect 32 miles more by May 2001.

In the wake of September 11 attacks, Congress abolished INS and placed its immigration authorities within the newly formed DHS, with CBP taking over INS’s border responsibilities in March 2003.

Thereafter, and in direct response to those attacks, Congress in the REAL ID Act of 2005 amended IIRIRA to give the DHS secretary authority “to waive all legal requirements” the secretary, in his “sole discretion, determines necessary to ensure expeditious construction of the barriers and roads” provided for in IIRIRA.

Border barriers got their biggest boost, however, in the Secure Fence Act of 2006 (SFA).

Section 2 of SFA directed the DHS secretary to “take all actions the Secretary determines necessary and appropriate to achieve and maintain operational control over the entire international land and maritime borders of the United States”.

Lest there be any confusion or attempts by a future secretary to avoid fulfilling that mandate, section 2 of SFA defined “operational control” as “the prevention of all unlawful entries into the United States, including entries by terrorists, other unlawful aliens, instruments of terrorism, narcotics, and other contraband”.

Included in the “actions” available to the secretary to comply with that mandate was authority to erect “physical infrastructure enhancements to prevent unlawful entry by aliens into the United States ... such as additional checkpoints, all weather access roads, and vehicle barriers”.

Congress did not stop there, however, as section 3 of SFA directed the secretary to “provide for at least 2 layers of reinforced fencing, the installation of additional physical barriers, roads, lighting, cameras, and sensors” in high-traffic areas of the Southwest border.

SFA was bipartisan legislation. In the House, 64 Democrats voted in favor of the bill, and just 18 Democrats (including Jim Jeffords (I-Vt.), who caucused with the Democrats) voted against it in the Senate.

Among the Democratic senators who voted in favor of the SFA were Hillary Clinton, Barack Obama, Joe Biden.

Sen. Biden not only voted for the SFA, but he also made support for border barriers a part of his campaign for president in 2008. In fact, at a campaign event in Iowa in 2007, Biden went into detail describing how fences stop drug smugglers.

Speaking of his ill-fated 2008 presidential campaign, at a November 2006 event in Columbia, S.C., Biden blamed Mexico for the United States’ border problems, asserting:

Mexico is a country that is an erstwhile democracy where they have the greatest disparity of wealth. ... It is one of the wealthiest countries in the hemisphere and because of a corrupt system that exists in Mexico, there is the 1 percent of the population at the top, a very small middle class and the rest is abject poverty.

He left such criticisms out of his most recent remarks lauding Mexico and AMLO.

Trump, the Wall, the Shutdown, and the Reprogramming. Bipartisan support for border barriers began to dissipate when Donald Trump ran for president in 2016, though he began talking about building a border “wall” during a New Hampshire speech in April 2014, long before he announced his candidacy.

Trump kicked off his 2016 presidential campaign on June 16, 2015, by responding to critics who doubted his wall claims, asserting: “I would build a great wall — and nobody build walls better than me, believe me, and I’ll build them inexpensively. I will build a great, great wall on our southern border, and have Mexico pay for it.”

On the trail, Trump repeatedly hammered on that refrain. The finer details were a proposal to block tens of billions of dollars in remittances annually to Mexico unless it provided barrier funding.

Candidate Trump was otherwise light on details about that “wall” and changed his descriptions of it often. In New Hampshire in January 2016, he described a barrier without “windows ... precast concrete going very high”. Once he became president, however, that became “steel slats” and “steel barriers”.

Nor did Trump apparently ever promise that it would run the entire 1,954-mile length of the border, “from sea to shining sea”.

Even in 2015, he noted that there were natural barriers in places that mitigated the need for a wall along the length of the border, and in April 2017, John Kelly, his first DHS secretary, told Congress: “It is unlikely that we will build a wall, a physical barrier, from sea to shining sea”.

Wall construction became a centerpiece of Trump’s 2016 campaign, and as the website FiveThirtyEight reported in September 2017, it was "Trump's Hardline Immigration Stance Got Him to the White House".

Not surprisingly, anything Trump was for his Democratic opponents were against.

In April 2017, then-House Minority Leader Nancy Pelosi asserted: “The wall is, in my view, immoral, expensive, unwise, and when the president says, 'Well, I promised a wall during my campaign.' I don’t think he said he was going to pass billions of dollars of cost of the wall on to the taxpayer”.

This clash between the president and his congressional opponents over border barriers came to a head in December 2018, when Trump demanded $5 billion for border construction. That lead to a weeks-long government shutdown that only ended on February 15, 2019, when Trump agreed to accept $1.375 billion for border-barrier funding in FY 2019.

That same day, however, the then-president issued a proclamation declaring a national emergency at the Southwest border and directing the Department of Defense (DoD) to assist in securing that border.

Ten days later, DHS asked DoD for assistance in constructing "fences[,] roads, and lighting" within 11 specified project areas, "to block drug-smuggling corridors across the international boundary between the United States and Mexico”. That was in addition to the $1.375 billion Congress had appropriated for border-wall funding in FY 2019.

The reprogramming of DoD funds for fence and infrastructure construction went through various legal actions but was eventually allowed to proceed by the Supreme Court.

Despite the acrimony that reprogramming effort created, and even though “the wall” was a major point of disagreement between Trump and congressional Democrats, additional funding of $1.375 billion "for the construction of [a] barrier system along the southwest border" was included in appropriations bills for FY 2020 and for FY 2021, respectively.

By the end of Trump’s term, 458 miles of the “border wall system” had been completed, though much of that was replacement of preexisting barriers: 226 miles in Arizona; approximately 100 miles in New Mexico (mostly near the Texas border); 55 miles all-told in Texas near El Paso, Del Rio, and in the Rio Grande Valley; and 77 miles near San Ysidro and El Centro, Calif.

Biden’s Shifting Position. Given the divisiveness of the “wall” issue, it was no surprise when then-candidate Biden publicly opposed Trump’s border infrastructure plans.

On his campaign website, Biden — again, a one-time proponent of border barriers — asserted: “A wall is not a serious deterrent for sophisticated criminal organizations that employ border tunnels, semi-submersible vessels, and aerial technology to overcome physical barriers at the border — or even for individuals with a reciprocating saw.”

Keeping his campaign promise, now-President Biden issued a proclamation “pausing" construction of barriers along the Southwest border on the day he took office, January 20, 2021.

That prompted 40 Republican senators in March 2021 to write to the head of GAO, Comptroller General Gene Dodaro, asking for an opinion on the legality of Biden’s January 20 infrastructure pause.

They contended Biden’s actions were an “impoundment of funds" in violation of the Impoundment Control Act (ICA), because, as noted, funding had been appropriated for those barriers, but not obligated for construction.

In a decision issued on June 15, 2021, Dodaro concluded Biden’s proclamation did not violate the ICA, finding, “Delays in the obligation and expenditure of funds in these circumstances are programmatic delays, not impoundments.”

One way or another, there has been no border construction under Biden, even though DHS promised to plug holes in the fence system in and around the “Yuma Gap” in Arizona in July, a promise likely made to protect the reelection prospects of that state's vulnerable incumbent Democratic Sen. Mark Kelly.

More to the Border Wall System. One of the most overlooked aspects of Biden’s pause is that there is more to a border wall system than barriers and fencing. There’s also fiber optic cables buried in the ground connecting to cameras and sensors, which allow agents to communicate; buried electrical wiring for cameras, sensors, and lights; roads providing agents access to the border itself; and the aforementioned lights, which illuminate the darkness in remote areas. Biden’s pause stopped construction on all of it, at a cost of billions of dollars to taxpayers.

Uninstalled fencing panels now sit rusting in the elements, while piles of gravel (for fence installations and roads) allow smugglers to hide from agents. The worst examples of waste, however, are the “stumps”, concrete bases for light towers that have already been placed into the ground but that now sit unused.

For good reason, as he has no interest in showing reporters the rusting panels, gravel piles, or light tower stumps that are the consequence of his border construction “pause”.

HSC shares jurisdiction with the House Judiciary Committee on certain immigration issues, but it has sole jurisdiction over border infrastructure, such as fences, roads, fiber optic cables, cameras, and lighting at the U.S.-Mexico line.

The chairman can call DHS Secretary Alejandro Mayorkas to ask the secretary about the effects of Biden’s “wall pause”. Mayorkas may have some wiggle room when it comes to whether the border is “secure” (though that term is objectively defined, as noted), but he has none when asked about washed-out roads and agents left in the dark by administration decisions.

Note that this could be a field hearing, and as explained in a September post, I visited the perfect place in Cochise County, Ariz., where that hearing could be held.

I have never met Chairman Green, but I have a sense that he’s not as grateful to the president for “not building even one meter of wall” as AMLO was. Border infrastructure may not be “sexy”, but fences, roads, cameras, and lights are critical to control of the Southwest border. It’s time for the doctor from Tennessee to examine DHS on its border infrastructure failures and prescribe some tough medicine.