Papering over the cracks in Biden's border policies

In an about-face at the border, on December 20 DHS announced that it would be “[c]losing small gaps” and “remediating incomplete gates” along the border fence erected under the Trump administration as part of its efforts “to move forward with activities necessary to address life, safety, environmental, and remediation requirements for border barrier projects”. “Politics” was not included in that list, but likely played a role, as well. 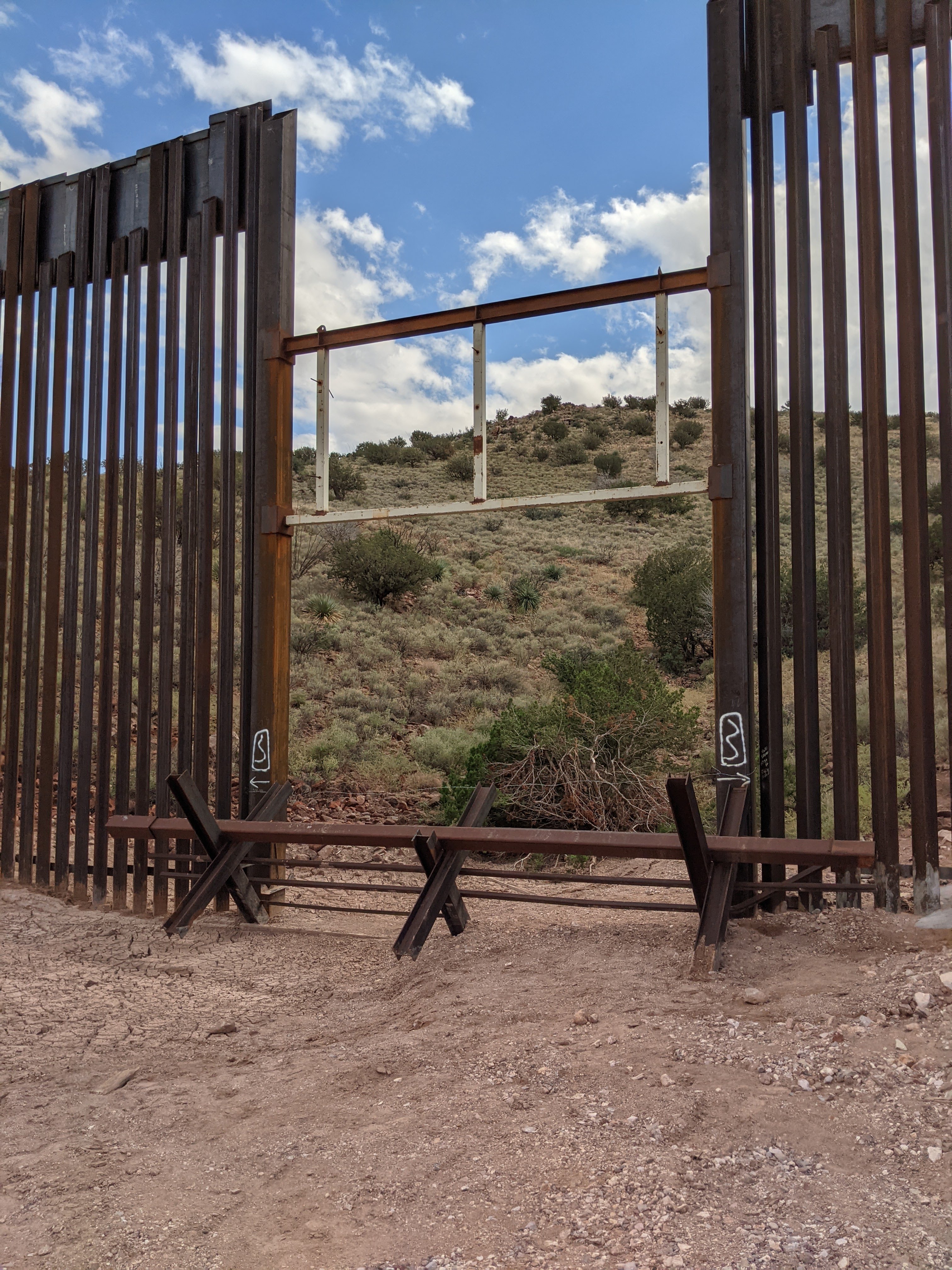 An “incomplete gate” in the border fence in Mew Mexico. Photo by Mark Krikorian

History of Barriers at the Southwest Border. Prior to the 2016 presidential campaign, the erection of barriers—including fences—and infrastructure along the Southwest border was a relatively bipartisan affair. Some form of border barriers predates my entry into the world of immigration, in June 1992, when I began work as a law school graduate at DOJ’s Executive Office for Immigration Review.

Barriers really became a focus of border-control efforts, however, in 1993 when the then-Border Patrol chief in the El Paso sector, Silvestre Reyes, repaired a dilapidated fence in that south Texas city’s downtown, and extended it outward as part of “Operation Hold the Line”.

In assessing that operation in 1995, the Center explained:

The El Paso Border Patrol sector, under the supervision of Chief Silvestre Reyes, proved that illegal immigration could be effectively deterred by a preventative deployment of agents along the border. ... By mobilizing his sector's resources along the border around the clock, he converted what had been a widely breached border river and fence between the busy cities of El Paso and Ciudad Juárez, Mexico, into an effective deterrent. The apprehension data show a precipitous drop from the outset of the operation.

Reyes rode his success as Border Patrol chief in El Paso to the U.S. House of Representatives, where he served as a Democrat from 1997 until he was defeated for reelection in the primary by Robert “Beto” O’Rourke in May 2012.

In any event, Reyes’s successful model was soon adopted in San Diego sector, which according to CBP’s website “accounted for more than half of illegal entries” at the time. The agency continues: “Operation ‘Gatekeeper’ was implemented in 1994, and reduced illegal entries in San Diego by more than 75% over the next few years.”

An October 2019 op-ed in the Washington Post explained that Operation Gatekeeper “was a massive undertaking, involving the construction of walls and fences along parts of the border that were easier to cross”.

After reviewing the success of barriers in deterring illegal migration, in September 2006 Congress passed the “Secure Fence Act of 2006”, which significantly expanded the construction of fencing along the Southwest border.

Then-Senator Joe Biden joined 79 of his colleagues (including his future boss, then-Senator Barack Obama) in voting in favor of that bill. He was not alone – 64 Democrats in the House did the same.

In fact, while most of the infrastructure required by that legislation was completed under the Bush administration, the "Obama-Biden” team built an additional 130 miles of the walls and fencing it authorized. By October 2014, 653 miles of fencing along the Southwest border was already in place.

Trump Makes “the Wall” an Issue. Bipartisan support for border barriers began to dissipate when Donald Trump ran for president in 2016, but he actually began talking about building a border wall during a New Hampshire speech in April 2014, long before he announced his candidacy.

The construction of a border wall was a centerpiece of Trump’s border promises during the 2016 campaign, and as the website FiveThirtyEight reported in September 2017, it was "Trump's Hardline Immigration Stance Got Him to the White House".

You can say many things about President Trump, but one of them is that regardless of the issue he chose, many of his political opponents would almost reflexively line up on the other side.

In April 2017, then-House Minority Leader Nancy Pelosi asserted: “The wall is, in my view, immoral, expensive, unwise, and when the president says, 'Well, I promised a wall during my campaign.' I don’t think he said he was going to pass billions of dollars of cost of the wall on to the taxpayer”.

That day, though, he also issued a proclamation declaring a national emergency at the Southwest border and directing the Department of Defense (DoD) to assist in securing that border.

Ten days later, DHS asked DoD for assistance in constructing "fences[,] roads, and lighting" within 11 specified project areas, "to block drug-smuggling corridors across the international boundary between the United States and Mexico.” That construction was in addition to the $1.375 billion that Congress had appropriated for border-wall funding.

The reprogramming of DoD funds for fence and infrastructure construction went through various legal actions but was eventually allowed to proceed by the Supreme Court.

Candidate Biden’s Opposition to “the Wall”. Given the divisiveness of the issue, it was no surprise when then-candidate Biden publicly opposed Trump’s border infrastructure. On his campaign website, Biden asserted: “A wall is not a serious deterrent for sophisticated criminal organizations that employ border tunnels, semi-submersible vessels, and aerial technology to overcome physical barriers at the border–or even for individuals with a reciprocating saw.”

Even though “the wall” was a major point of disagreement between Republicans and Democrats, additional funding of $1.375 billion "for the construction of [a] barrier system along the southwest border" was included in both the appropriations bills for FY 2020 and for FY 2021.

Biden’s “Pause” on Barrier Construction, and Its Aftermath. Keeping his campaign promise, however, President Joe Biden’s issued a proclamation "pausing" construction of barriers along the Southwest border on the day that he took office, January 20.

My colleague Todd Bensman was on the border the day that construction stopped, January 27. His reporting includes pictures of immobile backhoes, partially completed foundations, and vast quantities of “materiel left behind in the desert” including “thousands of wall panels”. Fencing that had already been erected simply ended in the wilderness.

On March 17, 40 Republican senators wrote to the head of the Government Accountability Office, Comptroller General Gene Dodaro, asking for an opinion on the legality of the January 20 pause.

They contended that Biden’s act was an “impoundment of funds" in violation of the Impoundment Control Act (ICA), due to the fact that funding had been appropriated for those barriers, but not obligated for construction.

In a decision issued on June 15, Dodaro found that the proclamation did not violate the ICA. He held:

Funds appropriated to DHS in fiscal year 2021 for border barriers have not yet been obligated because DHS must first comply with environmental, procurement, and other statutory prerequisites prior to obligating these funds for new projects. . . . Delays in the obligation and expenditure of funds in these circumstances are programmatic delays, not impoundments.

The Timing of This Week's Notice. Which brings me to the December 20 DHS notice. It explains that DoD will be “turn[ing] over unfinished projects to DHS in various stages of completion to undertake activities necessary to address urgent life, safety, environmental, or other remediation required to protect border communities.”

Absent from that list is border security, per se, which was a key component of the Secure Fence Act of 2006, but presumably that subject is subsumed in the protection of safety in border communities.

Why, exactly, is DHS resuming some limited construction now? I was in Del Rio, Texas, in August, a month before some 15,000 illegal migrants – mostly Haitian nationals – crossed the Rio Grande to that border town in September. One of the most striking scenes was the nearby border fencing, which abruptly stopped short of downtown. That is what is referred to in politics as “bad optics”.

More saliently from a political standpoint, however, is the national-security and humanitarian disaster that is unfolding at the Southwest border. In FY 2021, more illegal migrants were apprehended entering the United States across that border (1.659 million-plus) than in any fiscal year in recorded history.

Consequently, President Biden has taken a hit in his approval ratings, with one recent poll revealing that 71 percent of registered voters were concerned about illegal immigration at the Southwest border (44 percent were “very concerned”).

More specifically, the Washington Times reported on December 7 that 53 percent of respondents in one of its recent polls asserted that “a border wall is ‘an effective way’ to stop illegal immigration”, in contrast to 40 percent who disagreed.

In October, Quinnipiac revealed that 46 percent of registered voters support building a wall, compared to 49 percent who oppose it. That might not sound like a lot of support, but the polling group explains it “is the lowest level of opposition to building a wall along the border with Mexico since November 2016” when it first asked the question; at one point in 2017, 64 percent were opposed.

The 2022 midterm elections are less than 11 months away, and Biden’s Republican opponents view immigration as one of the Democrats’ vulnerabilities, as Reuters reported on December 21.

That article focuses on one race, in which Arizona Democrat Sen. Mark Kelly will be defending the seat that he won in 2020 when he defeated incumbent Sen. Martha McSally (R) by 2.4 percent of more than 3.335 million votes cast in a special election (McSally had been appointed to replace Sen. Jon Kyl, who resigned shortly after he was appointed to fill the seat following the death of Sen. John McCain).

Sen. Kelly’s leading opponent in that race is Arizona Attorney General (AG) Mark Brnovich. Reuters reports that AG Brnovich is focusing on what he calls Biden’s “failed border policies," and “is betting the message will resonate with voters Republicans need to mobilize in the 2022 elections”.

More precisely, Reuters explains: “Echoing some of the hard-line rhetoric of Republican former President Donald Trump, Brnovich supports the construction of a wall between the United States and Mexico and tougher immigration enforcement.”

The outlet notes that Sen. Kelly himself has criticized Biden’s border policies “at times”, and that the incumbent senator sent the president a letter on December 16, “calling on him to close existing gaps in Arizona's border barriers” and “to restore areas damaged by Trump-era border wall construction.”

Not surprisingly, DHS’s December 20 announcement explains that its new border “activities” will include areas in Border Patrol’s Yuma and Tucson sectors—both of which are in Arizona. Perhaps that is a coincidence, but the timing seems awfully suspicious.

What’s Next? Voters may not resoundingly support border fences, but many will likely oppose government waste at a time of economic uncertainty. Pictures of “fences to nowhere” that abruptly end near major border crossings and rusting steel beams sitting in the elements are catnip for political operatives seeking to score points. Expect to see them in campaign ads soon unless they are put to use.

DHS will likely shore up fencing that is under construction and use the wall panels Bensman described either where they were left or in places where unfinished fences are particularly glaring. Some foundations will be filled in, but a lot of the appropriated funds will likely be used for environmental remediation.

All of this is simply metaphorical wallpaper for the cracks in our broken border. Personally, I believe that barriers are crucial to DHS regaining operational control of the border, and that the “smarter border security measures” alluded to in DHS’s notice (like cameras and sensors) are helpful but are not the “force multiplier” that a 30-foot steel fence is.

Trust me: no “reciprocating saw” will breach steel-reinforced concrete fence posts before agents can show up and start asking questions.

Until the Biden administration implements policies to deter illegal migrants, more fences will help, but simply in aiding agents trying to manage the chaos at the Southwest border. Expect that chaos to continue because it does not look like the White House will be changing its border policies anytime soon.