Biden Administration to Close the Wall at Arizona’s ‘Yuma Gap’ 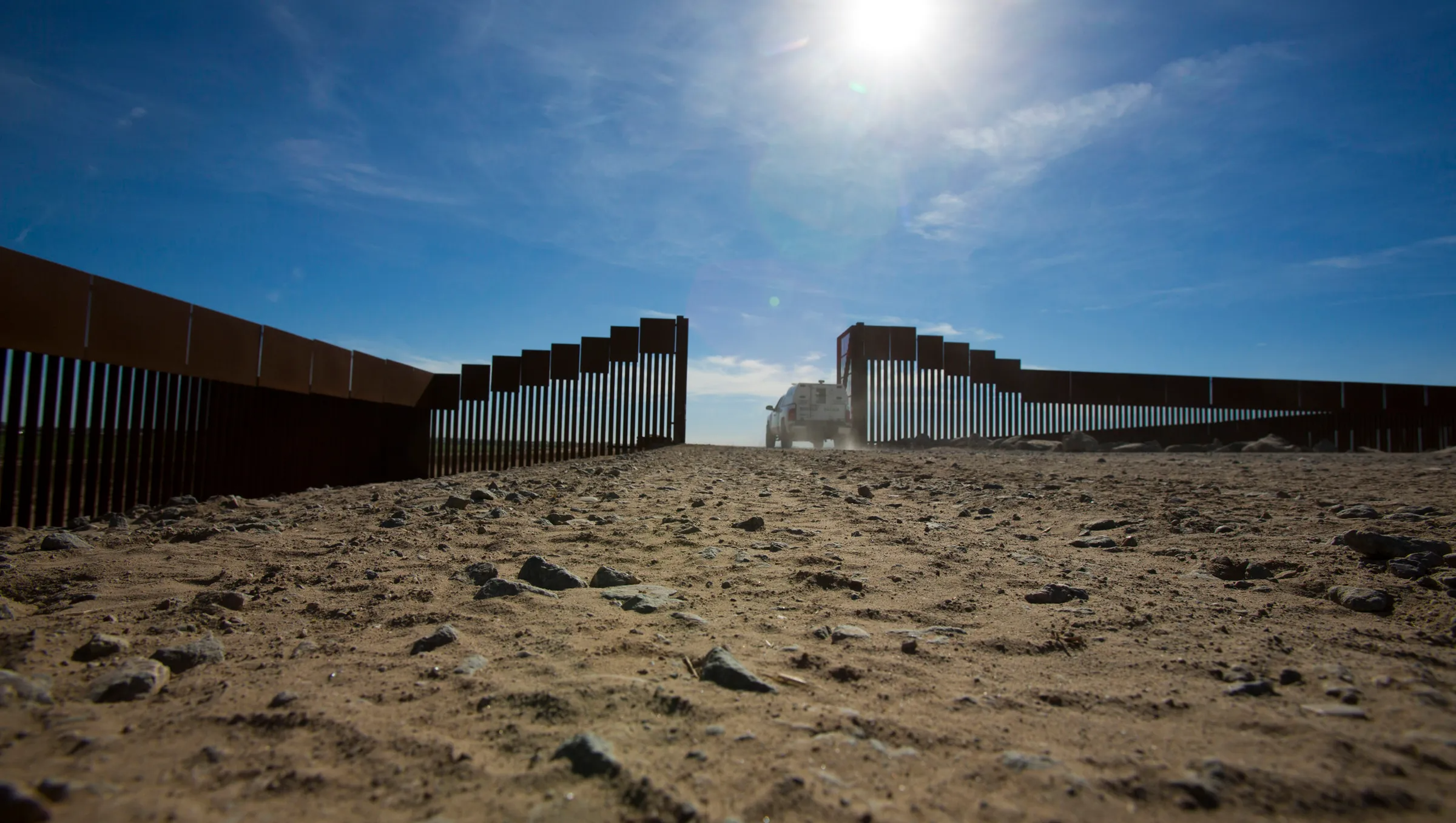 On July 28, DHS announced that it would be closing “four gaps located within an incomplete border barrier project near the Morelos Dam in the U.S. Border Patrol’s Yuma Sector” — that is, the Yuma Gap. I applaud the shift in the administration’s anti-barrier policies, but this one comes 18 months — and more than 345,000 migrants — too late.

Two Joe Bidens and the “Wall”. There are actually two Joe Bidens when it comes to the utility of border barriers, that is, the “wall”.

The first is the current occupant of the Oval Office, who as a candidate for president in 2020 asserted:

Building a wall will do little to deter criminals and cartels seeking to exploit our borders.

Building a wall from sea-to-shining-sea is not a serious policy solution — it’s a waste of money, and it diverts critical resources away from the real threats. Today, illicit drugs are most likely to be smuggled through one of the legal U.S. ports of entry. They are hidden among commercial cargo in semi-trucks or in a hidden compartment of a passenger vehicle. A wall is not a serious deterrent for sophisticated criminal organizations that employ border tunnels, semi-submersible vessels, and aerial technology to overcome physical barriers at the border — or even for individuals with a reciprocating saw.

That Joe Biden apparently fails to appreciate that barriers are an impediment and deterrent to the illegal entry of drugs and migrants, not an impenetrable obstacle. Tunnels are risky and expensive to build, submarines are hard to come by, and good luck taking a “reciprocating saw” to steel-reinforced concrete without a major power source, 1,000 extra blades, and a lot of time (that Border Patrol will use to respond, with a bunch of pointed questions).

As for drugs coming through the ports of entry, CBP officers there are seizing significantly fewer pounds of narcotics this fiscal year than in previous ones, even though there is an overdose epidemic that took more than 100,000 American lives last year — meaning that the cartels are now sending the stuff over an increasingly undefended border between the ports.

This Joe Biden issued a proclamation on his first day in office "pausing" the construction of barriers along the Southwest border, despite the fact that Congress had already authorized more than $1 billion in funding for that purpose — money that has sat, largely unused, ever since.

Then, there is the other Joe Biden, circa 2006-2007. In a November 2006 profile, NBC News described the then-senator from Delaware and incoming chairman of the Senate Foreign Relations Committee as “favor[ing] tightening the U.S.-Mexico border with fences” (they didn’t become “walls” apparently until Donald Trump made the word an epithet).

That Joe Biden told a Rotary meeting in Columbia, S.C., that same month: “Folks, I voted for a fence. I voted unlike some Democrats — you probably won’t like — I voted for 700 miles of fence,” an apparent nod to his vote in favor of the Secure Fence Act of 2006. That same day, notably, he also called for “punishing American employers who knowingly violate the law when, in fact, they hire illegals”, further suggesting a certain duality between the two Joe Bidens, at least when it comes to immigration enforcement.

At a campaign stop in Winterset, Iowa, in August 2007, this Joe Biden explained:

It makes sense that no great nation can be in a position where they can’t control their borders. It matters how you control your borders ... not just for immigration, but for drugs, terror, a whole range of other things. ... I have been arguing for more protection at the borders. ... You have to have a significant increase in security at the border, including limited elements where you actually have a fence. Not a fence that runs for 3,000 miles like some folks are talking about, but there are certain places — you can go over and under a fence, but you can’t take 100 kilos of cocaine over and under a fence. And, when you have limited places where fences are in populated areas, you force these drug dealers and others around, making it easier to apprehend. [Emphasis added.]

The Yuma Gap. That earlier version of Joe Biden would have been livid over the Yuma Gap, four stretches of levee along the Colorado River near the Morelos Dam that runs between the United States and Mexico, proximate to Arizona’s third-largest city, where there are no barriers at all, and where thousands cross illegally, weekly.

I was there in March and, as I explained, many if not most of the 126 miles of the border in the Border Patrol’s Yuma Sector have some sort of barrier, a fact lauded by then-DHS Secretary Elaine Duke in August 2017:

For years, Yuma sector was besieged by chaos as a nearly unending flood of migrants and drugs poured across our border. Even as agents were arresting on average 800 illegal aliens a day, we were still unable to stop the thousands of trucks filled with drugs and humans that quickly crossed a vanishing point and dispersed into communities all across the country.

It is hard for anyone familiar with Yuma sector today to imagine this scene. That’s because nearly a decade ago, a group of bipartisan lawmakers came together to protect the homeland, save innocent lives, and build a physical barrier across the border.

I went to Yuma in January 2019 and concluded that Duke was indisputably correct. Even then, however, there was one major vulnerability — the section of the border near the Morelos Dam where the only impediments were Normandy-style vehicle barriers, which an individual could climb over easily.

The Trump administration acted to plug that hole in the wall with 30-foot steel bollard fencing, an effort that was largely complete when Biden took office. In fact, the fence panels are still lying right across from the gap, waiting to be installed.

And then, the latest version of Biden stopped construction there, and the panels were left to rot in the Sonoran sun. Sensing an opportunity, migrants and smugglers started pouring through. In January 2021 — when Biden issued his proclamation — agents in Yuma apprehended 1,604 migrants, a figure that quadrupled the next month, and then doubled again in March. By September, apprehensions exceeded 22,400 monthly, and then climbed further, to nearly 30,000 in December, and exceeding 34,200 in May 2022.

In all of FY 2020, agents in Yuma sector caught just 8,804 migrants, a figure that held fairly steady in the months both before and after the Covid-19 pandemic was declared in March 2020.

In FY 2021, however, apprehensions were 1,300 percent higher in Yuma sector than the fiscal year before (114,488). Notably, 96 percent (nearly 110,000) of those apprehensions occurred after Biden took office, and halted wall construction at the gap. In the first nine months of FY 2022, they have more than doubled again, to 235,230, bringing Biden’s total to more than 345,000 apprehensions in the Yuma sector.

The migrants in Yuma are very different from those apprehended along the rest of the Southwest border. Nearly 209,000 of the illegal entrants apprehended there thus far in FY 2022 (88 percent) are not from Mexico, or from the “Northern Triangle” countries of El Salvador, Guatemala, or Honduras, either. They are “long distance migrants”, who have headed to this dusty corner of the desert all-but-assured of entry into the United States.

More than 9,600 are from India; 37,000-plus are from Venezuela; and nearly 1,050 are from the EU nation of Romania. There are even “glam” migrants decked out in Versace, putatively looking for, in White House terminology, “a better life” (although their old ones couldn’t have been that bad).

Under the standard set by 2007 Joe Biden, the United States is no longer “a great nation” (or a serious one) because, at the Yuma Gap at least, we “can’t control our borders”. That Joe Biden would have been disgusted, assuming he meant anything he said in Iowa 15 summers ago.

Was Biden Visited by the Jacob Marley 2007 Joe Biden — or Richard Nixon? Perhaps, Jacob Marley-style, the old Biden visited the current model and convinced him that allowing haute couture migrants to stroll into the United States was ridiculous.

More likely, however, it was the ghost of Richard Nixon, because this move to close the Yuma Gap appears to have been driven by pure politics.

While Biden’s fellow Democrats in the U.S. Senate control the chamber, there is a 50-50 split there with the GOP, and Vice President Kamala Harris (as president of the Senate) casts the tiebreaking vote.

One of those 50 Democrats is Arizona’s Mark Kelly, and he is up for reelection in November. Biden’s Democrats can’t afford to lose any seats, which means that they likely need Kelly to be reelected for Biden to get anything done in the second half of his first term.

Although the Republicans have not yet picked Kelly’s competitor, more than $74 million has already been spent in that race, including $29 million by Kelly (who is running unopposed in the Democratic primary), making it one of the most expensive in the country.

Biden hit a new low in the Grand Canyon State in March polling by OH Predictive Insights, with 40 percent approval vs. 55 percent disapproval. Biden’s approval was 24 percent underwater when it came to his handling of immigration in that poll, a four-point decline from the previous May. Kelly is a former astronaut, and therefore likely a pretty good swimmer, but he does not need that millstone around his neck.

The Yuma Gap is a national-security eyesore, and so closing it is a political no-brainer. Of course, Biden’s DHS cannot be so crass, so they explain their change of heart as follows:

Due to the proximity to the Morelos Dam and the swift moving Colorado River, this area presents safety and life hazard risks for migrants attempting to cross into the United States where there is a risk of drownings and injuries from falls. This area also poses a life and safety risk to first responders and agents responding to incidents in this area.

Respectfully, that is true of many areas along the border where the fence sits partially completed, most notably (as CBP’s Office of Professional Responsibility noted in a recent report) across from the weir dam that runs through the Rio Grande at Del Rio, Texas. DHS has not published any press releases about closing the “Del Rio gap” as a safety measure, however.

DHS’s closure of the Yuma Gap reeks of politics but is still good news. It’s just 18 months — and more than 345,000 illegal migrants — too late, a fact with which the Joe Biden who spoke to voters in Winterset, Iowa in August 2007 would agree.