Children, families, and third-country nationals all up. Will Biden hit the snooze button on this wake-up call? 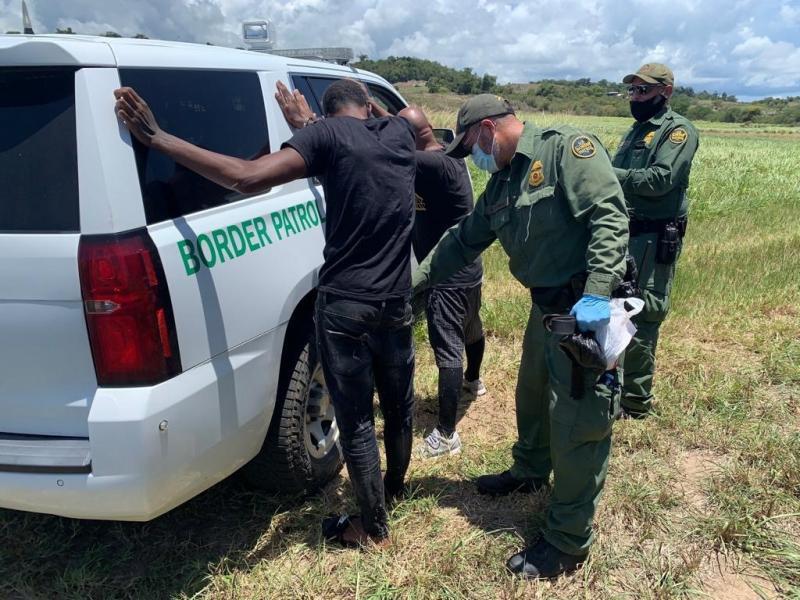 I noted last week that the Border Patrol had apprehended an all-time record number of illegal migrants at the Southwest border in FY 2021 (which ended on September 30). Those numbers, while dismal in themselves, are much, much worse than they appear.

To recap: In FY 2021, Border Patrol agents apprehended 1,659,206 illegal migrants at the Southwest border, 15,000 more than the previous record there.

Historic Increase at the Southwest Border, Decline at the Northern and Coastal Borders

That said, the highest total for Border Patrol apprehensions at all borders (Northern, coastal, and Southwestern) was just less than 1.693 million in FY 1986 — after which Congress passed and President Reagan signed the massive 1986 amnesty, which was supposed to deter all illegal entries (it didn’t).

Of course, when Congress realized the national-security vulnerabilities posed by an open border after the September 11th attacks, they flooded it with resources in FY 2002, which is why apprehensions that fiscal year fell to fewer than one million and cratered at 310,531 in FY 2017 (assisted in no small part by the advent of the Trump administration).

The reason why Southwest border apprehensions set a record in FY 2021 but total apprehensions fell just below FY 1986 and FY 2000 was because few aliens entered illegally at either the Canadian or the coastal borders: Agents along the world’s “longest undefended border” apprehended a mere 916 illegal migrants, and the coastal Border Patrol sectors of Miami, New Orleans, and Ramey accounted for just an additional 2,045 more.

That is not to discount apprehensions at San Diego sector (142,459) or El Centro (more than 59,000). Those California sectors have traditionally seen a lot of apprehensions, but that is because, historically, most illegal migrants were Mexican nationals, and they usually entered through the western sectors.

Not in FY 2021. Mexican nationals did account for the largest citizenship grouping when it came to apprehensions at the Southwest border last fiscal year (608,037, or less than 37 percent), but “other than Mexican” nationals (OTMs) accounted for the remaining 63 percent.

By FY 2019, nationals of those Northern Triangle countries made up more than 71 percent of all Southwest border apprehensions.

FY 2021 saw a new and disturbing trend: The rise in OTM and “other than Northern Triangle” (ONT) illegal migrants at the Southwest border. Border Patrol apprehended 367,275 OTM/ONT aliens at that border last fiscal year, 22 percent of the total.

To make that even worse, their numbers have been on an upward trajectory since the inauguration of President Biden. In January, OTM/ONT apprehensions totaled fewer than 9,500. That rose to almost 40,000 in May, topped 57,000 in July, and reached 67,531 in September — a 600 percent increase in just eight months.

Not surprisingly, given the border meltdown in Del Rio, Texas, last month when more than 15,000 Haitian migrants surged over the Rio Grande, the number of Haitian migrants entering illegally is on a particularly troublesome track. “Just” 827 Haitian migrants were apprehended at the Southwest border in February.

Almost 6,000 were apprehended in June, but their numbers dipped slightly to just over 5,500 in July before surging to more than 7,500 in August and then more than doubling to 17,638 in September — a 2,000 percent increase in a seven-month period.

Traditionally, Cuban and Haitian migrants entered illegally by boat, and I warned of a new flotilla from those countries as their political systems devolved into chaos in July. That has not developed (yet); instead, Cubans and Haitians are entering illegally at the land border in Texas.

That is not to say that all those Cubans and Haitians are coming directly from the streets of Havana or Port-au-Prince. When I was on the banks of the Rio Grande in Del Rio in August, I found piles of Chilean identification cards for Haitian nationals and Cuban passports with the identification pages ripped out showing residence in South American countries.

The obvious reason that the prior bearers of those documents dumped them is because they don’t plan on telling asylum officers that they were “firmly resettled” in third countries, which would be an asylum bar. When the Biden administration sent Haitians in Del Rio back to Haiti, the repatriated likely hadn’t been “in-country” in a while.

Recidivism Was High, but Not as High as in the Past

In its September 2021 “Operational Update”, CBP tried to put the best face on these dismal statistics. The number of Border Patrol apprehensions (“Del Rio” notwithstanding) at the Southwest border declined 5.6 percent from August to September, but that update asserts that the number of “unique encounters” there declined 9 percent, to “just” 142,710.

I explained the “unique encounter” phenomenon in late September, but briefly, some aliens who are apprehended and returned attempt (not surprisingly) to reenter again. When they do so within the same 12-month period, they are counted as two or more “encounters” but just one “unique encounter”.

This is the heart of a concept known as “recidivism”, and you will often hear the administration and migrant advocates contend that because of those recidivist entries, the border numbers are not as historically bad as they appear.

Don’t believe them. Recidivism is not a new phenomenon, as I explained in September, and although the recidivism rate is higher than it has been in recent years, it is lower than it had been in the not-so-distant past.

The operational update asserts that of the 192,001 CBP encounters in September (Border Patrol apprehensions between the ports and aliens deemed inadmissible at the ports along the Southwest border), 26 percent “involved individuals who had at least one prior encounter in the previous 12 months, compared to an average one-year re-encounter rate of 14 [percent] for FYs 2014-2019.”

Similarly, the operational update states: “Encounters of unaccompanied children [UACs] decreased 24 [percent], with 14,358 encounters in September compared with 18,806 in August.” That is true, but is more reflective of how bad August (and FY 2021 generally) was when it came to UAC apprehensions than how much better things are getting.

Border Patrol’s UAC statistics go back to October 2009 (unaccompanied alien children are a recent phenomenon, driven by bad legislation in 2008, as I explained in September), and prior to the Biden administration, the only month in which UAC apprehensions at the Southwest border exceeded 10,000 was May 2019 (11,475 UAC apprehensions).

These are not numbers to be proud of.

Family-Unit Apprehensions Approached Yearly Record — and Are Getting Worse

Then, there are adult migrants travelling with children in “family units” (FMUs). The operational update states: “Encounters of family unit individuals decreased by 26 [percent] from 86,631 in August to 64,388 in September — well below the peak of 88,587 encounters in May 2019.”

Border Patrol’s FMU statistics date back to October 2012 (again, it is a recent phenomenon, exacerbated by a poorly reasoned 2015 district court decision requiring children in FMUs to be released in 20 days), and it’s true that September’s FMU apprehension numbers were lower than those in May 2019.

That is an inapt comparison, however, because FMUs drove the “border emergency” in FY 2019: More than 55 percent (473,682) of the 851,508 apprehensions at the Southwest border that fiscal year were aliens in family units. The 451,000-plus FMUs in FY 2021 came close to that record, but as a percentage of the total (27 percent) it is much lower because the numbers of single adult migrants and UACs apprehended were so high.

A big reason why the number of FMUs apprehended at the Southwest border surged in FY 2021 (they totaled fewer than 52,300 in all of FY 2020) was because the Biden administration ditched the highly successful Trump-era “Migrant Protection Protocols” (MPP), better known as “Remain in Mexico”.

Under MPP, aliens apprehended entering the United States illegally and claiming credible fear were sent back to Mexico to await hearings on their asylum applications. An October 2019 assessment of the program found that it was successful in discouraging migrants — and in particular migrant families — from entering illegally, because they knew that they would not simply be released into this country.

DHS terminated MPP in June, but that effort was blocked by a federal district court judge (in a case that made it all the way to the Supreme Court in short order), and now the Biden administration is begrudgingly reimplementing it.

With due respect to the president and his advisors, eliminating MPP and other Trump-era initiatives that had brought operational control to the border was a boneheaded idea. CBP can attempt to gloss over the FMU surge at the Southwest border, but those policies (and MPP in particular) were implemented to stem the migrant surge in FY 2019; without them, nothing will stop this flood.

Want proof? Here is what CBP did not explain in its operational update: In September 2019, after MPP was implemented, Border Patrol apprehended 15,824 migrants in family units at the Southwest border, just over one-quarter (25.2 percent) as many as were apprehended last month (62,577).

As the Washington Post explained in February, illegal migration at the Southwest border has historically peaked in May and declined significantly throughout the heat of the summer and into the early winter. CBP knows this but offered an “apples-to-oranges” comparison to elide how bad the FMU problem has become.

Illegal migration at the Southwest border has declined slightly across the board since Border Patrol apprehended more than 200,000 illegal migrants there in July, but that drop-off is slight (less than 8 percent, to more than 185,500 in September), and much lower than those historical monthly declines.

Expect It To Get Worse Before It Ever Gets Better

Back in March, the president claimed that then-recent increases in illegal migration were simply due to such seasonal surges, but as the statistics show, that was not the case in FY 2021 — it was a bad year unlike any prior. While Biden’s DHS is now being forced kicking and screaming to reinstate MPP, without other significant policy changes, it will not be enough.

The worst part is, as the Center explained in a recent regulatory comment, the Biden administration wants to turbocharge the incentives for illegal migrants, by granting itself (in violation of law) the authority to simply release every alien who enters.