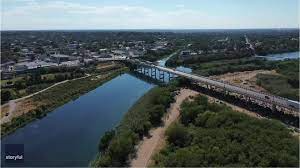 The Southwest border is 1,954 miles long, and though the disaster there is plunging headlong into catastrophe, it’s worse in a handful of the Border Patrol’s nine sectors there than in others. To understand how bad things are, and how much worse they are going to get, it’s best to focus on the overworked agents in just one, the Del Rio sector, 245 miles of the border where illegal entries and deaths are way up, and drug seizures are plummeting.

That Was Then — Del Rio the Sleepy Border Outpost. While I’ve been involved in immigration for 30 years, I only took my first trip to Del Rio five years ago, in August 2017. I hadn’t traveled there before because there was no need to — it had always been a rather sleepy outpost, at least compared to San Diego sector in the late 1990s and the Rio Grande Valley (RGV) beginning in the late 2010s.

In fact, I only went to Del Rio in 2017 because it served as a counterpoise to what I had just seen in the RGV, where agents and Texas Highway Patrol troopers were keeping watch on what then seemed like a busy stretch of the Rio Grande. If we had only known.

Border Patrol vehicles were a constant sight on the streets in the city of Del Rio and adjacent Eagle Pass, and agents not only kept the border under control, but also provided support for the local cops — as evidenced by the fact that the local sector headquarters appeared at the top of every list of “important phone numbers”.

By FY 2019, however, apprehensions surged, to 57,629, or just fewer than 158 illegal entrants per day, which were handled by a slightly larger staff of 1,436. That was what was then considered, and treated like, a “border emergency”.

The Trump administration responded by implementing deterrence policies like the Migrant Protection Protocols, better known as “Remain in Mexico”, pursuant to which aliens were returned across the river to await hearings on their asylum claim.

For many if not most of those migrants, the chance to live and work here was the goal, not asylum, and illegal entries fell. In Del Rio sector, they dropped 47 percent between May 2019 and September 2019.

This Is Now — Del Rio a Sector in Free Fall. Things headed south directly after Biden took office and quickly ditched those policies. In FY 2021, the 1,500 agents in Del Rio sector had to apprehend, process, transport, and care for a whopping 259,000-plus migrants, nearly all of them “give-ups” who surrendered to agents in the (reasonable) expectation that they would be quickly released.

That equals out to an average of 710 migrants per day, or roughly 19 times the traffic just four years prior. In September 2021 alone, Del Rio sector agents encountered more than three times as many illegal entrants (43,570) than they had in all of FY 2017.

September 2021 was the month that anywhere between 15,000 and 30,000 aliens — mostly Haitian nationals — crossed the Rio Grande illegally into the city of Del Rio, where they overwhelmed not just Border Patrol but also the local resources available to accommodate them.

As I explained at the time, “Del Rio” quickly became “shorthand for a border in chaos ... due to a ‘perfect storm’ of bad immigration policy and incompetent planning”, a “problem ... made worse by confusion coming out of the Biden administration”, which not only failed to lead in the crisis, but that also sent mixed messages to the migrants themselves.

Ostensibly looking for a scapegoat to erase images of migrants circulating back and forth across the river in search of the food and water they weren’t otherwise provided, and erecting makeshift lean-tos to protect themselves against the south Texas heat, the administration latched onto a handful of pictures and videos showing mounted agents on horseback who were trying to apprehend crossers in the Rio Grande.

Aided by a credulous media, it used those pictures and videos to peddle the fallacy that the agents were “whipping” Haitians, which prompted knee-jerk condemnation all the way to the White House, up to and including the president. On September 24, a florid Biden declared:

That was two days after DHS Secretary Alejandro Mayorkas promised the House Homeland Security Committee that his department would investigate the incident “with tremendous speed and tremendous force. ... We ourselves will pull no punches.”

I’d hate to see what Mayorkas looks like when he chooses a languid course, because that investigation dragged on until early July, when CBP’s Office of Professional Responsibility (OPR) finally issued its report on the incident.

OPR failed to find that any migrants had been whipped, a fact readily apparent to any observer. What was troubling, however, was that the report revealed OPR had tried to get the U.S. Attorney’s Office to prosecute agents for using “force, or threats of force, to coerce or compel individuals to return to Mexico”.

Nothing better describes the Biden administration’s feckless approach to the Southwest border than its CBP watchdog’s futile attempt to imprison Border Patrol agents for carrying out the component’s stated mission: “to prevent the illegal entry of individuals into the United States”.

Things have only gotten worse since September. In the first 10 months of FY 2022, agents in Del Rio sector have apprehended more than 376,000 illegal migrants — an average of 1,774 per day. In other words, Border Patrol made more apprehensions in any eight-day period this fiscal year in Del Rio sector than it did in all of FY 2017, and more than twice as many as during the same (already bad) period in FY 2021.

I could tell what was in the air when I returned to Del Rio sector for the first time last August. Border Patrol vehicles no longer filled the streets, and the only agents visible were at: (1) the river crossing where those thousands of migrants would converge a month later; (2) the highway checkpoint; and (3) the makeshift detention facility they had erected near Eagle Pass.

Local cops and a flood of state troopers were and are doing their best to fill the void; if not for them, there would be no enforcement at all.

Not surprisingly, Border Patrol’s other missions in Del Rio sector — preventing the entry of drugs and other contraband — have suffered in that void.

Overall, Border Patrol drug seizures of “hard drugs” like methamphetamine, heroin, fentanyl, and cocaine at the Southwest border are 16 percent higher this fiscal year compared to the same period in FY 2020. That makes sense, given U.S. overdose deaths surged to more than 100,000 in the 12-month period ending April 2022.

If anything, agents’ seizure numbers should be even higher than they are right now, given the drug epidemic gripping the nation.

The problem is that Border Patrol seizures of those hard drugs are down in Del Rio sector this fiscal year — way down, 58 percent lower compared to the same period in FY 2020, but more troubling, off 62 percent from the first 10 months of FY 2021.

When agents are overwhelmed with processing illegal entrants, they cannot stop the drugs. Want proof? Go to Del Rio sector.

Like apprehensions and entries, migrant deaths are regrettably also up in the sector, however.

According to CBP, more than 200 of those deaths in FY 2022 have been recorded in Del Rio sector, and the bodies of three more migrants were recovered from the Rio Grande there in a four-hour period on August 17 alone.

Statistics on the number of deaths in the sector for FY 2021 have not yet been published, but there were just 34 recorded deaths there in FY 2020, and 38 in FY 2019. The 200-plus migrant deaths in Del Rio sector have already exceeded the toll there for the eight full fiscal years between FY 2013 and FY 2020.

Chernobyl-Style Meltdown at the Border. In April 1986, the Number Four reactor at the Chernobyl nuclear plant in the then-Soviet Republic of Ukraine melted down, resulting in the deaths of at least 30 within a three-month period, the relocation of 200,000, and the poisoning of countless others.

According to the World Nuclear Association, that accident was due to a “flawed reactor design” and a plant operated by “inadequately trained personnel”. Measures could have been taken to prevent that catastrophe but weren’t.

There is a metaphorical meltdown occurring across the Southwest border, with Del Rio sector and the RGV at its core, as the foregoing reveals.

The “design” in this case, however, is poorly thought-out, but not “faulty”. The Biden administration, having concluded that the immigration laws are “inequitable”, has decided that its objective is no longer to deter foreign nationals from entering illegally.

Instead, the plan is to accommodate those migrants by foisting them off on an already overburdened immigration court system, or placing them in a novel administrative system of its own making where their work permits can be expedited, and their asylum claims rubberstamped.

It’s akin to cranking the reactor up, draining the cooling system, disabling the fail-safe devices, and asserting that the resulting catastrophe was due to external factors. Mayorkas is now like the Vicomte de Valmont (John Malkovich) in the 1988 movie “Dangerous Liaisons”, repeating over and over again to a distraught Madame de Tourvel (Michelle Pfeiffer), “It’s beyond my control.” And no truer in the border context than in the costume-drama one.

The Biden administration officials stage-managing this fiasco could relieve the burden on the exhausted and abused agents, slow the flow of drugs, and prevent countless migrant deaths beginning tomorrow if they wanted to, by returning to deterrence policies that worked under Trump. They won’t because their agenda is more important. Everything else is simply collateral damage.