That’s a major shift in U.S. policy, and the reason why the border is in chaos 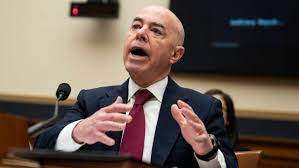 While DHS Secretary Alejandro Mayorkas’ appearance before the House Judiciary Committee on April 28 drew a lot of press, his May 4 testimony before the Senate Homeland Security Governmental Affairs Committee (HSGAC) has largely flown under the radar. It’s worth a watch, though, because Mayorkas offered his own take on the congressional mandate that he gain “operational control” of the Southwest border — and it doesn’t match Congress’s take. Rather, in a shift from every prior administration, the current one has no intention — or policy — to deter illegal migrants.

Highlights. While much calmer and more copacetic than the House hearing, Mayorkas’ appearance before HSGAC did not lack for highlights and firecrackers (in lieu of fireworks).

For example, Sen. Josh Hawley (R-Mo.), likely channeling the frustration of many in his conference, ended his first round of questioning stating, “The time has come for you to resign.” In that vein, Sen. Mitt Romney (R-Utah) referred to the situation at the border as an “extraordinary failure” and told Mayorkas in frustration: “You’ve got to secure the border.”

In response to questions from Sen. James Lankford (R-Okla.) about DHS’s mandate to detain all illegal migrants apprehended at the border, Mayorkas simply told Lankford without elucidation, “We have misused detention for many years” — logically including when he was the DHS Deputy Secretary.

Doubling down, Scott asserted that those agents:

[D]on’t believe that you are doing anything, they believe that this is the first administration that has sat there and done nothing to secure the border. The actions you have taken since you took this job — you promised me you would enforce the law. I don’t think there is any question that you’re not enforcing the law, and I think that you have utterly failed in your duty to the American public, and I don’t think there is any question what you’ve done. I am just shocked when you see this, you talk to families who have lost their kid to these drugs and it’s just skyrocketed since you’ve been in office.

I don’t get why you can sit here and you can go on television, you can come here and claim this border is secure and you’re enforcing the laws.

Scott then turned to the border numbers:

Tell me how it’s secure when you have two million illegal border crossings last year and more than half of those individuals were allowed to stay? Think about the numbers for a second; a little over 300 million people in America, so about one in every three hundred people in this country today came here illegally since Joe Biden took office.

Sensing an opening, Mayorkas asserted that the opioid overdose death rate has been increasing “for too many years”, and then interestingly contended: “Individuals are not allowed to stay in the United States unless their claims for relief are adjudicated favorably by an immigration judge. They are in immigration enforcement proceedings.”

I say “interestingly” because the secretary is ostensibly oblivious to the fact that the administration has been pushing a plan to give his asylum officers at USCIS — not immigration judges — jurisdiction over protection claims made by illegal migrants apprehended at the Southwest border for more than a year.

DHS and DOJ, in fact, published a proposal to do just that back in August, in response to which the Center sent a detailed, 83-page response explaining that not only was it was a bad idea, but illegal as well. Despite that, the administration has published a rule that will shift that adjudication authority to asylum officers, which is set to take effect on May 31.

To put a pin in it, the HSGAC ranking member, Sen. Rob Portman (R-Ohio), revealed that Border Patrol had told him that it would “lose all operational control” of the Southwest border once CDC orders directing the expulsion of illegal migrants, issued under Title 42 of the U.S. Code in response to the Covid-19 pandemic, end (currently scheduled to occur on May 23).

Operational Control. “Operational control” is a term of art and a statutory mandate, and one that I (often alone) have been discussing for nearly a year.

That term is defined in section 2(b) of the Secure Fence Act of 2006 (SFA) as “the prevention of all unlawful entries into the United States, including entries by terrorists, other unlawful aliens, instruments of terrorism, narcotics, and other contraband”.

While DHS under the Biden administration contends it has “prosecutorial discretion” not to arrest, detain, and remove aliens (a questionable proposition as applied that I will accept for the sake of argument), the secretary has no discretion not to comply with the statutory mandate that he achieve and maintain “operational control” of the border.

During his testimony before the House Judiciary Committee, Mayorkas told Rep. Chip Roy (R-Texas) that DHS, in fact, has “operational control” over U.S. borders, after Rep. Roy read the secretary section 2(b) of the SFA.

In response to questioning from Sen. Lankford at the HSGAC hearing, however, Mayorkas complained that under that statutory definition, “this country has never had operational control” of its borders.

The secretary continued, contending that “obviously a layer of reasonableness must be applied here, and looking at that definition through the lens of reasonableness, we dedicate now 23,000 personnel to the border, we are surging increased personnel, facilities, and other methods of support, and in my opinion, operational control means maximizing the resources we have to deliver the most effective results.”

Note that the SFA is not written in aspirational terms, despite Mayorkas’ contentions about “layers of reasonableness” , as section 2(a) of the SFA, which was signed into law on October 26, 1996, reveals:

Not later than 18 months after the date of the enactment of this Act, the Secretary of Homeland Security shall take all actions the Secretary determines necessary and appropriate to achieve and maintain operational control over the entire international land and maritime borders of the United States. [Emphasis added.]

Mayorkas appears to believe that the SFA operational control mandate is “process oriented”, and consequently as long as he does his best with what he has, he is in compliance.

In addition to his response to Sen. Lankford about “personnel, facilities, and other methods of support”, the secretary proudly also told Sen. Scott that the president’s FY 2023 budget calls for 300 new Border Patrol agents (a 1.5 percent increase over FY 2021 staffing levels and thousands fewer than are needed right now).

A plain reading of section 2 of the SFA reveals, however, that this mandate is “results oriented”: Congress has set the goal (zero illegal entrants and zero drugs) and has given the secretary carte blanche to “take all actions necessary and appropriate to achieve” that goal.

Even if “operational control” were process oriented, however, the secretary would still be failing. Not surprisingly, the “Secure Fence Act” focused heavily on deterring illegal entries through the use of border barriers, but Mayorkas flat-out told Sen. Portman that he refused to commit to finishing “the wall and the technology that goes along with the wall”.

More significantly, however, the Biden administration refuses to employ the cheapest and easiest strategy at its disposal to achieve operational control: The implementation of policies to deter illegal migrants.

The Unprecedented Shift from a Migrant Deterrence Policy. Mayorkas talked about DHS’s efforts to combat the smuggling organizations and cartels that are facilitating the illegal entry of foreign nationals at the Southwest border, and its campaign to battle “disinformation” disseminated to would-be illegal migrants by those groups to encourage their illicit entry. But he mentioned nothing about what the administration is doing to deter the migrants themselves.

That’s because the administration isn’t doing anything to deter illegal entrants. Quite the opposite. It quickly rescinded every policy that the Trump administration had implemented to allow DHS to bring control to the Southwest border, including and in particular the Migrant Protection Protocols (MPP, better known as “Remain in Mexico”) and border wall construction.

I was not privy to Sen. Scott’s conversations with those Border Patrol agents, but when they complained that Mayorkas wasn’t “doing anything to make the border secure”, the lack of a deterrence strategy was almost definitely what they meant.

And as for those agents’ conclusions “that this is the first administration that has sat there and done nothing to secure the border”, that assessment accurately reflects that the Biden administration is the first in American history for which there is no such deterrence strategy.

I served under both Presidents Bush and the Clinton and Obama administrations, and the primary border policy of each was deterrence, and in particular discouraging illicit entry by denying illegal migrants the ability to live and work in the United States indefinitely. Want proof?

The gravamen of the Flores case (in which the judge simply made up a 20-day release requirement for accompanied children at the border, the reason for the surge in adults entering illegally with children in “family units” (FMUs) since FY 2015) was the plaintiffs’ claim that the Obama administration was improperly detaining FMUs to discourage other illegal FMU entries.

But Congress mandated that illegal migrants be detained, in part to discourage aliens from entering illegally to gain long-term residence in the United States while their asylum claims (meritorious or usually otherwise) played out. That, however, is likely one of the “misuses” of detention Mayorkas now protests, but not only is it a statutory requirement, it works.

My colleague Mark Krikorian has argued that the Biden administration’s border plan is to let all illegal migrants in and to conceal the fact it is doing so. That is plainly the plan, and one that reflects a tacit attitude that all foreign nationals seeking refuge, economic advantage, “a better life”, “the American dream”, etc. should be given the opportunity to seek asylum here if they can cross the border illegally, and that they should be allowed to live and work in the United States until that process is completed.

That is why the Biden administration wants to cut DHS’s detention space and to expand more costly and ineffective “alternatives to detention” — deterrence is no longer the strategy, or administration policy.

That would simply be a political issue were it not for the detention and operational control mandates. The problem for the administration is that those mandates are real, and again, even if DHS can contend that it has the prosecutorial discretion to ignore the detention mandate (and courts are loath to force law-enforcement agencies to enforce the law), it has no such flexibility when it comes to “operational control”. Some court, at some point will reach that conclusion.

DHS can save the American people money (in terms of direct and fiscal costs) and better protect the homeland from drugs, criminals, and terrorists (its core mission) if the Biden administration were to slow the surge of illegal migrants through a deterrence strategy. Unlike under every previous administration, however, deterring aliens from entering illegally is no longer part of the Biden border plan.