A welcome reversal that's too little too late

DHS released on “Update on Southwest Border Security and Preparedness Ahead of Court Ordered Lifting of Title 42” this week, detailing plans the department is implementing in response to a wave of illegal migrants anticipated after the expiration of "Title 42", the CDC orders directing the expulsion of illegal migrants, issued pursuant to Title 42 of the U.S. Code in response to the Covid-19 pandemic. The tendentious and self-serving DHS document contains some items of interest — including that the Biden administration will finally restart, on a limited scale, border-wall construction. It’s especially interesting given a lawsuit DOJ just filed against Arizona over shipping containers that seal a major border gap.

Title 42, in Brief. CDC issued its first Title 42 expulsion order during the Trump administration in late March 2020, but the center reissued those orders several times thereafter (subject to modifications and amendments), well into the Biden administration. 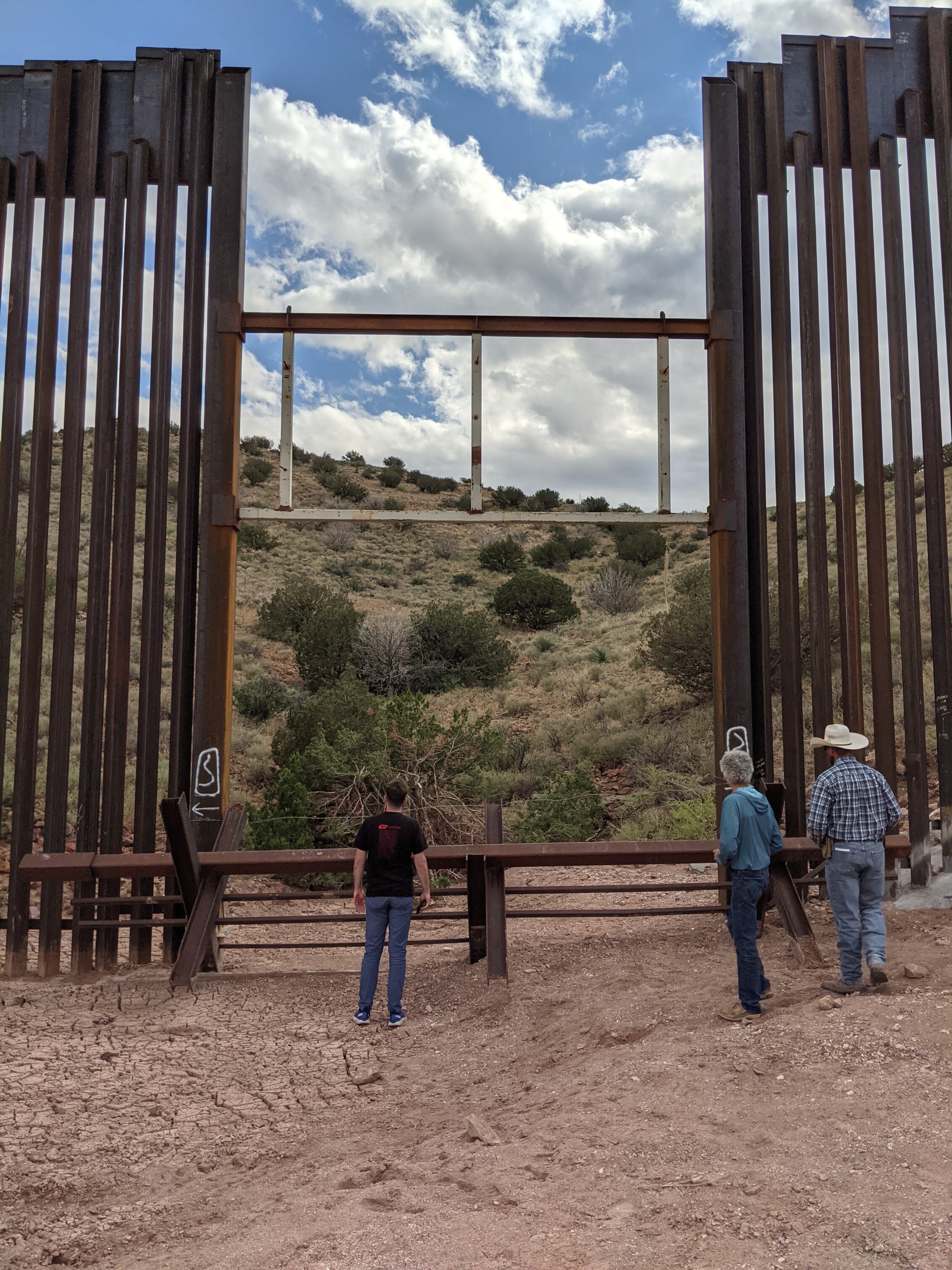 An October 2021 photo of a gate in the border wall in New Mexico left unfinished by President Biden's Inauguration Day stop-work order.

President Biden quickly rescinded nearly every one of his predecessor’s successful border policies, most significantly the Migrant Protection Protocols (MPP), better known as “Remain in Mexico”. That’s the most significant reason why illegal entries at the Southwest border have swelled to new records in the past two fiscal years.

Biden maintained Title 42 for a while, however, most likely because it’s not a “border policy” per se. Title 42 purely concerns public-health, and was promulgated to stem the introduction and spread of the novel coronavirus in the United States, and to protect DHS employees at the border and the ports.

Still, Biden’s DHS never enforced those Title 42 CDC orders (under which expulsion is mandatory) as robustly as the department did under Trump.

Border Patrol expelled more than 87 percent of illegal Southwest border migrants who were subject to Title 42 during the Trump administration, but expulsions dropped to around 58 percent between February and September 2021, and further declined in FY 2022, when fewer than 48 percent of the more than 2.2 million illegal migrants apprehended at the Southwest border were expelled.

Nonetheless, something’s better than nothing, and nothing was what Biden’s rescission of Trump’s border policies would have otherwise left agents with to deal with the border surge. Consequently, those Title 42 public-health orders played an outsized role in border security.

Despite that fact, and notwithstanding DHS warnings that up to 18,000 aliens per day would cross the border illegally post-Title 42, on April 6 the administration announced Title 42 would end May 23. A coalition of states, fearing the impact of Title 42’s termination on their communities, sued, and on May 20, federal district court Judge Robert Summerhays enjoined the administration’s attempt to end Title 42.

While the administration immediately appealed that order, it was not stayed, and so Title 42 remained up in the air but still in effect. That was until November 17, when a different district court judge, Emmet Sullivan, vacated and enjoined Title 42. In a later order, he set December 21 as the termination date for Title 42.

Deflecting Blame. The Biden administration is appealing Judge Sullivan’s order, even as it continues to fight Judge Summerhays’ order, an act of litigation flexibility my colleague George Fishman has described as “disingenuous”. It’s possible the D.C. Circuit — which is considering the latest appeal — will accede to the administration’s request and forestall the end of Title 42, but it’s a wild card in this high-stakes game.

In the interim, DHS has begun planning for Title 42’s demise, and the update mentioned above is its most recent disclosure on its efforts.

Not surprisingly, the department (whose head, DHS Secretary Alejandro Mayorkas, was recently told to resign or face an impeachment inquiry by incoming Speaker-presumptive Kevin McCarthy (R-Calif.)) deflected blame for the current chaos and impending catastrophe at the Southwest border onto unscrupulous smugglers and “larger global trends” in illegal migration.

The department can — and should — pursue and prosecute those smugglers, but Biden and Mayorkas have made the smugglers' jobs too easy by rejecting measures that would deter illegal entry (such as detaining and criminally prosecuting border crossers), thus all but ensuring that illegal migrants who are not expelled under Title 42 will be released by DHS to live and work in this country indefinitely.

Border Infrastructure. There is much else to disparage in DHS’s tepid and ineffectual post-Title 42 plans (which my colleagues and I will likely do in future posts), but its update does surprisingly reveal that the Biden administration has a newfound interest in border infrastructure. The update states:

We are installing effective technology like linear ground detection systems and automated surveillance towers (an increase of 32 percent more towers since the start of FY 2022) and have approved the closure of over 120 gaps and gates along the border.

The reference to “gaps and “gates” is code for “wall construction”, or more precisely border fencing. That said, in another act of deflection, DHS fails to explain why exactly there are “gaps” in fencing and unfinished gates to begin with.

The unspoken reason why that fencing is incomplete is because — unlike Sen. Joe Biden who made support for border fencing a signature of his failed 2008 presidential campaign — President Joe Biden has expressed nothing but disdain for such border barriers.

Take his most recent (and more successful) presidential campaign, when Biden vowed “There will not be another foot of wall constructed on my administration.” True to his word, on his first day in office he ordered “an immediate pause in wall construction projects”.

It’s important to note that there is more to a “wall” than just a wall (though fencing panels and gates are big components).

There’s fiber-optic cable buried along the fence line, which provides Border Patrol with cellular reception in remote areas (meaning most of the Southwest border) and connects to sensors alerting agents to cross-border intrusions.

And there’s also lighting that illuminates the fence and its environs at night, electrical wiring and hook-ups for the fiber-optic cable and lights, and roads for Border Patrol vehicles to traverse.

When Biden “paused” the “wall”, he also paused the cables, the lighting, the wiring, and the roads, wasting millions and creating hazards that smugglers can exploit. Why won’t the president go to the border? It’s not because “there are more important things going on”, as Biden has stated — it’s because piles of gravel, stacks of rusting fence panels, and unfinished light polls make for a bad photo-op.

The vast majority of the American people have never been to the border and seen that senseless waste, but such images are catnip for young and enterprising reporters drawn to the line overrun by migrants. That, as much as anything, is likely why Biden’s DHS has such a sudden interest in “gaps and gates”. 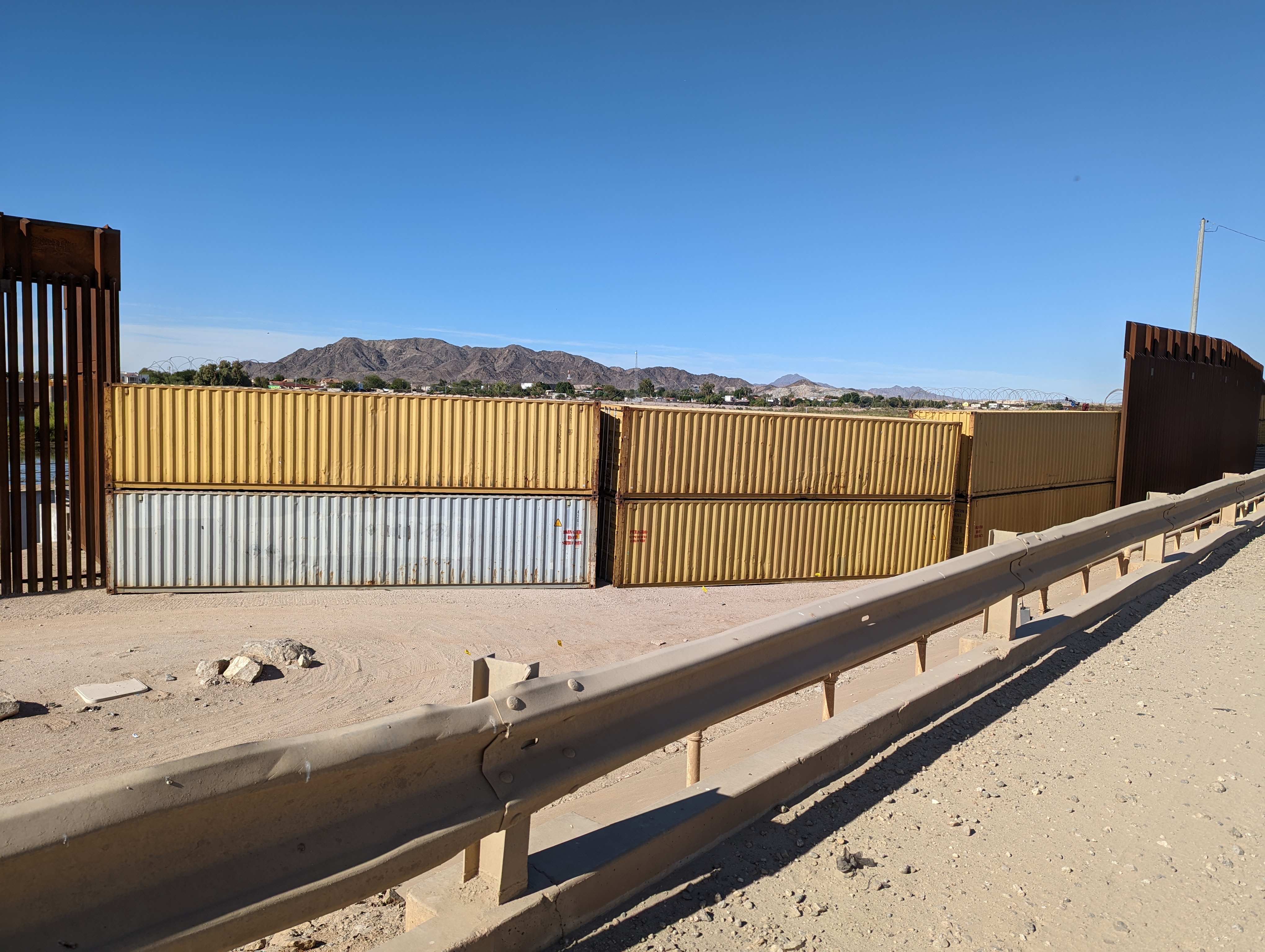 The Yum Gap in November 2022, plugged with shipping containers.

One major gap along the Southwest border is in Yuma, Ariz. The “Yuma Gap” is an unfinished portion of border fencing, directly across from Mexico and accessible via the Morelos Dam, which spans the international boundary at the Colorado River.

In February, it was reported that 1,000 migrants per day were coming through the Yuma Gap, some fashionably clad and bringing so much luggage that Border Patrol had to set a weight limit on the amount they could bring on the government vehicles taking them to processing.

That was a bad look for Arizona Democratic Sen. Mark Kelly, then in the midst of a tight reelection bid. Not surprisingly, therefore, DHS announced in July it would be completing the fencing in the Yuma Gap. When construction remained stalled, however, term-limited Arizona Gov. Doug Ducey (R) ordered state officials to plug the gap with shipping containers in August.

Those containers triggered a legal battle between the Grand Canyon State and the federal government’s Bureau of Reclamation, with Ducey filing a lawsuit against the feds and, now, DOJ suing Arizona.

Reporter Ali Bradley tweeted out the letter that DOJ sent to Ducey and the state’s (also outgoing) Attorney General Mark Brnovich on December 12:

#BREAKING Sources confirm no more work will be done on Gov. @DougDucey’s shipping container barrier in the Coronado National Forest following a @TheJusticeDept injunction—This comes after protesters blocked crews for over a week.

No word on if the containers will be removed. pic.twitter.com/HG50tLnvWY

That’s likely news to the 40 Republican senators who wrote Comptroller General Gene Dodaro in March 2021, asking for an opinion on the legality of Biden’s January 20 border wall “pause”.

Congress approved funding of $1.375 billion “for the construction of [a] barrier system along the southwest border” in each of its FY 2020 and for FY 2021 appropriations bills, for total of $2.75 billion.

Some of that money was spent on construction under the Trump administration, but much of it remains unspent, as Biden has refused to build any more barriers. The senators alleged that was an illegal “impoundment” of funds, and while the comptroller general found no legal wrongdoing, the “gaps and gates” reference in DHS’s post-Title 42 update calls the logic of Biden’s action into question.

For what it’s worth, it also calls the logic of DOJ’s lawsuit into question. The Yuma gap is plainly a national security vulnerability, so why not let sleeping containers lie, especially since DHS plans to accomplish roughly the same goal — plugging the gap?

With the threat of a post-Title 42 border looming, the Biden administration has a newfound appreciation for border barriers and infrastructure. The problem is, its response will likely be too little and too late to forestall a humanitarian catastrophe.