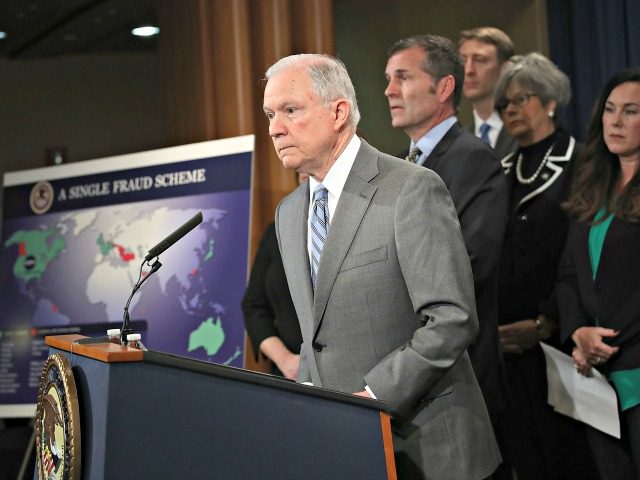 Attorney General Jeff Sessions issued a decision in Matter of A-B- on Monday which provides bright-line rules for immigration judges, asylum officers, and the Board of Immigration Appeals (BIA) to follow in adjudicating asylum claims based upon criminal harm inflicted or threatened by non-government actors.

In writing earlier this year about the attorney general's referral of this case to himself I noted that he had requested briefing on "[w]hether, and under what circumstances, being a victim of private criminal activity constitutes a cognizable 'particular social group' for purposes of an application for asylum or withholding of removal."

As I stated then:

This suggests that the attorney general is likely to issue bright-line rules for the consideration of asylum involving criminal activity, including gang claims. The ultimate decision is likely to have wide-reaching consequences.

That was, in fact, the result of that decision.

By way of background, section 208(b)(1) of the Immigration and Nationality Act (INA) gives the attorney general the authority to grant asylum to any alien who has applied for that protection "if the Attorney General determines that such alien is a refugee within the meaning of section 101(a)(42)(A)" of the INA.

[A]ny person who is outside any country of such person's nationality or, in the case of a person having no nationality, is outside any country in which such person last habitually resided, and who is unable or unwilling to return to, and is unable or unwilling to avail himself or herself of the protection of, that country because of persecution or a well-founded fear of persecution on account of race, religion, nationality, membership in a particular social group, or political opinion.

In Matter of A-B-, the attorney general returned to fundamental issues of asylum law, including what "persecution" is, how a "particular social group" is defined, and the requirement that there be a "nexus" between the social group identified and the persecution that was purportedly inflicted or is feared.

At issue there was a claim for asylum by a Salvadoran national who had entered the United States illegally. She asserted that she was eligible for asylum because she had been persecuted on account of her membership in what she described as the particular social group of "'El Salvadoran women who were unable to leave domestic relationships because they have children in common with their partners."

The immigration judge who heard that application denied it in December 2015 on four separate grounds: First, that the applicant was not credible because of discrepancies and omissions in her testimony. Second, that the proposed group did not qualify as a "particular social group" for purposes of section 101(a)(42)(A) of the INA. Third, that even if that group did satisfy that standard, the applicant failed to show "that her membership in that social group was a central reason for her persecution." Fourth, that the applicant had failed to show that the Salvadoran government "was unable or unwilling to help her."

The BIA reversed that decision in December 2016. First, the BIA concluded that the immigration judge's credibility determination was "clearly erroneous". Second, the BIA found that the particular social group in question was "substantially similar" to a group recognized by the BIA is meriting asylum in Matter of A-R-C-G-, specifically "married women in Guatemala who were unable to leave their relationship". In addition, the BIA held "the immigration judge clearly erred in finding that the respondent could leave her ex-husband," and further, that the applicant "established that her ex-husband persecuted her because of her status as a Salvadoran woman unable to leave her domestic relationship." The BIA finally concluded "the El Salvadoran government was unwilling or unable to protect" the applicant.

The attorney general vacated that decision, and remanded it to the immigration judge.

Based upon prior BIA precedent, the attorney general held that in order for an applicant for asylum to establish membership in a particular social group, that applicant must demonstrate:

(1) membership in a particular group, which is composed of members who share a common immutable characteristic, is defined with particularity, and is socially distinct within the society in question; (2) that her membership in that group is a central reason for her persecution; and (3) that the alleged harm is inflicted by the government of her home country or by persons that the government is unwilling or unable to control.

In his decision, the attorney general overruled the BIA's decision in Matter of A-R-C-G- because it was "wrongly decided and should not have been issued as a precedential decision."

He noted that the BIA had based its decision in Matter of A-R-C-G- on three key concessions by the Department of Homeland Security (DHS):

Because of DHS's multiple concessions, the Board performed only a cursory analysis of the three factors required to establish a particular social group. The Board concluded that A-R-C-G-'s purported particular social group was "composed of members who share the common immutable characteristic of gender," and that "marital status can be an immutable characteristic where the individual is unable to leave the relationship." With respect to particularity, the Board observed that the terms defining the group — "married," "women," and "unable to leave the relationship" — had commonly accepted definitions within Guatemalan society. And finally, with respect to social distinction, the Board cited evidence that Guatemala has a "culture of machismo and family violence," and that although Guatemala's criminal laws [] prohibit domestic violence, "enforcement can be problematic because the National Civilian Police often failed to respond to requests for assistance related to domestic violence."

As a consequence, the BIA, in subsequent decisions (including its decision in Matter of A-B- below), read the BIA's decision in Matter of A-R-C-G- "to encompass most Central American domestic violence victims" without analyzing those claims pursuant to its own case law governing the assessment of whether a group is a "particular social group" for purposes of asylum.

Most significantly, to be cognizable as a "particular social group", the group must "'exist independently' of the harm asserted in an application for asylum or statutory withholding of removal." As the attorney general explained:

If a group is defined by the persecution of its members, then the definition of the group moots the need to establish actual persecution. For this reason, "[t]he individuals in the group must share a narrowing characteristic other than their risk of being persecuted." ... A-R-C-G- never considered that "married women in Guatemala who are unable to leave their relationship" was effectively defined to consist of women in Guatemala who are victims of domestic abuse because the inability "to leave" was created by harm or threatened harm.

Social groups defined by their vulnerability to private criminal activity likely lack the particularity required under M-E-V-G-, given that broad swaths of society may be susceptible to victimization. ... Victims of gang violence often come from all segments of society, and they possess no distinguishing characteristic or concrete trait that would readily identify them as members of such a group.

Turning to the definition of "persecution", the attorney general noted that this concept has "three specific elements": "an intent to target a belief or characteristic"; that "the level of harm must be 'severe'"; and that "the harm or suffering must be 'inflicted either by the government of a country or by persons or an organization that the government was unable or unwilling to control.'"

As for the first element the, the attorney general noted: "private criminals are motivated more often by greed or vendettas then by an intent to 'overcome the protected characteristic of the victim.'"

With respect to the "severity" element, the attorney general conceded that "[p]rivate violence" could satisfy this standard, including the violence alleged in Matter of A-R-C-G-.

Addressing the third element for "persecution", the attorney general held:

An applicant seeking to establish persecution based on violent conduct of a private actor "must show more than 'difficulty ... controlling' private behavior." ... The applicant must show that the government condoned the private actions "or at least demonstrated a complete helplessness to protect the victims." ... The fact that the local police have not acted on a particular report of an individual crime does not necessarily mean that the government is unwilling or unable to control crime, any more than it would in the United States. There may be many reasons why a particular crime is not successfully investigated and prosecuted. Applicants must show not just that the crime has gone unpunished, but that the government is unwilling or unable to prevent it.

The attorney general also addressed the critical "nexus" requirement for asylum relief. To be granted asylum, an alien normally must show such a nexus between the persecution alleged or feared, and the statutory ground for asylum. He noted that, when assessing whether persecution was inflicted on account of a protected ground, the focus is on the motive of the persecutor, that is, "why the persecutor[] sought to inflict harm."

Critically, under section 208(b)(1)(B)(i) of the INA, to prevail, an asylum applicant "must establish that race, religion, nationality, membership in a particular social group, or political opinion was or will be at least one central reason for persecuting the applicant."

When private actors inflict violence based on a personal relationship with a victim, then the victim's membership in a larger group may well not be "one central reason" for the abuse. ... A criminal gang may target people because they have money or property within the area where the gang operates, or simply because the gang inflicts violence on those who are nearby. ... That does not make the gang's victims persons who have been targeted "on account of" their membership in any social group.

Similarly, in domestic violence cases, like A-R-C-G-, the Board cited no evidence that her ex-husband attacked her because he was aware of, and hostile to, "married women in Guatemala who are unable to leave their relationship." Rather, he attacked her because of his preexisting personal relationship with the victim. ... When "the alleged persecutor is not even aware of the group's existence, it becomes harder to understand how the persecutor may have been motivated by the victim's 'membership' in the group to inflict the harm on the victim."

By their nature, the cases addressed by the attorney general in Matter of A-B-, that is, cases involving criminal violence inflicted by private actors, are particularly difficult for adjudicators. Often, the applicant is credible, and the harm inflicted is well supported by the administrative record. Denying asylum relief to an applicant who has suffered grievous harm is not easy. The categories for asylum relief, however, are narrow, and the standards for that relief are stringent. As the attorney general held:

Nothing in the text of the INA supports the suggestion that Congress intended "membership in a particular social group" to be "some omnibus catch-all" for solving every "heart-rending situation."

When immigration judges or the BIA ignore the standards for asylum relief to cover a particularly sympathetic applicant who would not otherwise be eligible for such relief, the adjudicator exceeds the authority granted by Congress and the attorney general, but more importantly undermines the legislative branch's authority to set limits on immigration and the attorney general's authority to establish rules implementing the laws Congress has passed.

As a practical matter, the attorney general's decision in Matter of A-B- will likely serve to limit the number of aliens found to have a credible fear of persecution, and limit the number of asylum grants issued by asylum officers and the immigration courts. This, in turn, will reduce incentives for aliens to enter the United States illegally or without documents at the ports of entry to claim credible fear, thereby protecting the integrity of the borders and cutting the number of subsequent asylum claims heard by immigration judges. This will allow those judges to consider other pending cases, and reduce the backlog before the immigration courts.