A Review of Open Borders Inc.: Who's Funding America's Destruction?, by Michelle Malkin 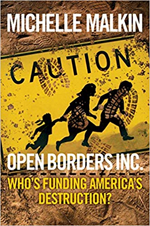 The last four decades of mass immigration did not just happen by chance. Complex social and political forces drove the demographic transformation that has added 55 million people to the U.S. population since 1980. Given the magnitude of this transformation, it is curious that more has not been written on how and why it occurred. Here at the Center, Jerry Kammer and others have documented historic policy decisions that led to exponential increases in immigration. But such analysis is largely absent in the volumes of specialized immigration studies published each year by academia. Even in the popular press, narratives on what is behind this influx, which affects every aspect of American life, are surprisingly rare.

Michelle Malkin's provocative new book, Open Borders Inc.: Who's Funding America's Destruction? helps fill this void. The work is a grand conspiracy theory, which Malkin is the first to admit, but one that is built on a dizzying array of facts and figures, all of which indict powerful individuals and institutions who are working to dissolve American sovereignty. That may sound hyperbolic, but it is the stated goal of one of Malkin's chief antagonists, George Soros, who has openly declared that "sovereignty is an anachronistic concept originating in bygone times" and that "the critical issue of our time is how to overcome the obstacles posed by national sovereignty to the pursuit of the common interest." Soros has donated a considerable portion of his fortune through his network of Open Society Foundations, the world's "largest private funder of independent groups working for justice, democratic governance, and human rights", to those who are actively undermining American immigration law in various ways both here and abroad. These include activists on the ground assisting migrant caravans, community organizers, educational groups, and political operatives.

The long-term commitment that Soros has made to dissolving national sovereignty is staggering. But his resources fund only a piece of the effort to open the border that is being made by transnational organizations, corporations, churches, celebrities, and even officials within the U.S. government, all of which Malkin documents with hundreds of anecdotes. She is admittedly angry, having devoted her life's work to seeking "the safety and security of the United States" while witnessing this burgeoning coalition of lawlessness. She believes that countering this growing "immigration anarchy" is "the most central and existential issue of our time."

The push for open borders reveals the post-national political shift that has occurred among western elites, who exhibit far less concern for their fellow citizens than they once did. Transnationalism is growing on both the left and the right (in spite of populist uprisings like the Brexit vote and the election of Donald Trump). But while the intent of ideologues like George Soros is clear, the intent of others in the open borders coalition is not as obvious. Does every Catholic priest who ministers to migrants or every social worker assisting refugees wish to remake the entire social and political order? Undoubtedly the answer is no. Many of these folks are apolitical actors who truly want to help the most vulnerable. Unfortunately their motive has gotten mixed up with billions of dollars in public funding that has clouded their judgment.

Malkin quotes Sen. Daniel Patrick Moynihan, who, in reference to Catholic Charities, foresaw the demise of private institutions back in 1980: "Private institutions really aren't private anymore ... many are primarily supplied by government funds. In time, there cannot be any outcome to that encroachment save governmental control." This is what has happened to Catholic groups and other organizations assisting immigrants and resettling refugees. A majority of their revenue comes from public sources and they are compensated by the volume, putting the emphasis on bringing ever increasing numbers of foreigners to the United States rather than prudently assessing the need for relocation, promoting integration, and considering the impact on local communities.

To make matters worse, resettlement is increasingly controlled by intergovernmental agencies within the United Nations that are awash in cash and rife with venality. Malkin quotes the Arabic language news site Al Monitor: "Aid organizations have become fountains of corruption, while 'humanitarian mafias' accrue massive sums." And she cites a UN internal audit that deemed every measure of financial controls over refugee relief funds "unsatisfactory". Bribery and sexual exploitation have been widely reported. This culture has infected scores of migration charities operating in the United States. Despite what good they still may do, they have become a major migration industry driven by profits and internationalist in outlook. Or as Malkin says, they have become "a colossal, profit-seeking venture cloaked in humanitarian virtue." By this assessment, they are similar to the industries that lobby for ever more foreign workers to drive down wages and increase profits.

The scope of this open-borders coalition is massive. And while it contains some who are unwitting participants, those driving the agenda are members of a diverse elite who know exactly what they are doing. And they are doing it, as Malkin says, with "unfettered contempt for actual popular sentiment." This includes much of the Hollywood elite, who, as Malkin details, seek to abolish the border while living behind "walls within walls within walls" in an "impenetrable bubble of protection", much like the officials in the Vatican.

What is confounding about all of this is how indifferent the coalition seems to the harm caused by open borders. As Malkin succinctly puts it, those undermining our immigration laws are "enabling human trafficking, violent crime, and exploitation of cheap, illegal alien labor." She includes stories of illegal-alien criminals, refugee terrorists, and overwhelmed communities unable to stop the constant flow of resettlement. There is a high social and fiscal cost to unregulated immigration that somehow never fits into the calculus of those advocating more of it. While they presume to have the moral high ground, an unprecedented level of immigration is detrimental to everyone. Malkin includes a heterodox quote from Father Andrew McNair, chaplain for the Office of Black Catholic Ministry of the Diocese of Providence, "The right to immigrate is not absolute ... the common good of any nation consists of three principles: respect for the person, social well-being and development, and peace ... lax immigration policy walks over these principles ... enforcing the law and asking people to obey the law isn't mean or heartless, but charity in its truest sense."

Unfortunately, "respect for the person" has been replaced by incivility on immigration. It was not all that long ago when those who wanted high levels of immigration would debate those who favored lower levels. Both sides would acknowledge a certain number of facts, like socioeconomic data from the Census Bureau, and calmly and respectfully discuss normative outcomes based on those facts. Sharing any common ground is now rare. Even government statistics are rejected as illegitimate and those favoring lower levels of immigration, or those simply favoring enforcement of the laws on the books, are dismissed as racist. In much of the media and academia, and even in some congressional hearings, a rational basis for discussion no longer exists.

The current environment of slander and censorship is fostered by groups like the Southern Poverty Law Center, a self-proclaimed arbiter of hate speech that uses its influence to shut down its political opponents. (The Center for Immigration Studies has filed a lawsuit against the SPLC under the Racketeer Influenced and Corrupt Organizations Act.) Mark Potok, a former principal of the now disgraced group, which has been called out for its own internal racial, sexual, and financial injustices, explained the organization's intent, "I want to say plainly that our aim in life is to destroy these groups, to completely destroy them." Co-founder Morris Dees has concurred: "We see this political struggle, right? So you know, I mean, we're not trying to change anybody's mind. We're trying to wreck the groups, and we are very clear in our head: we are trying to destroy them."

For years that is what the SPLC sought to do to dozens of groups with whom they disagreed. Their efforts ruined the reputations of many good people and resulted in violence and attempted murder. CIS did our own expose on them and Malkin devotes a chapter to the impact they have had persuading public and private institutions to cripple groups and individuals while raking in millions from gullible celebrities like George Clooney.

The refusal to debate marks an erosion of liberal democratic ideals and a descent into ignorance and violence. Malkin provides anecdotes of individuals who have been blacklisted by Twitter and Facebook and declined business by financial institutions. She quotes conservative David Horowitz on this communist tactic: "The censorship powers of Social Media are awesome and historically unprecedented. When they are amplified by the arbitrary financial power of corporations such as Mastercard and Visa, the result is a leviathan willing and able to crush out basic freedoms and constitutional guarantees without a moment's remorse." Malkin also provides details on terrorist organizations like Antifa, which have dropped pretense and taken to the street to commit violence, ironically in the name of fighting fascism.

To say the current political climate is troubling would be a grievous understatement. At the forefront of this disturbing development are those who are undemocratically pushing for open borders. Michelle Malkin does a service to everyone who is interested in returning to a calm and reasoned debate by chronicling their antics.