Not All Migrants Are Refugees, But More and More Migrants Are Falsely Claiming Persecution to Enter Into a Country 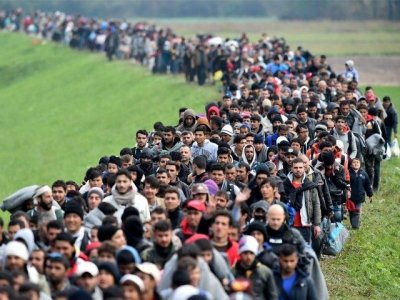 International Migrants Day was last month (December 18), but it’s not too late to revisit the meaning of the term “migrants” and the controversy surrounding it. To do that, I refer to the site, “The Meaning of Migrants”, created by Jørgen Carling, research professor and co-director of the Peace Research Institute Oslo (PRIO) Migration Centre.

So who is a migrant? As Carling notes, “The question is simple but the answer is contested.” I wrote about this controversy in 2015 in a post titled: “To be called migrants or refugees? That is the question”.

There is no single universally accepted definition of “migrants”. This is in contrast to “refugees”, who are legally defined in the 1951 Refugee Convention; a refugee “is someone who is unable or unwilling to return to their country of origin owing to a well-founded fear of being persecuted for reasons of race, religion, nationality, membership of a particular social group, or political opinion”. The lack of such a definition for “migrants” leaves room for numerous interpretations and controversies.

The controversy surrounding the term “migrants” revolves mainly around whether or not it is an inclusive label that includes refugees. This discord has been at the center of policy debates and media coverage.

The “inclusivist view” considers migrants to be “people who have moved from their usual place of residence, regardless of their legal status and their motivations for moving”. Which means that migrants include refugees but also foreign workers, victims of trafficking, international students, etc.

The “residualist view” sees migrants as “people who have moved from their usual place of residence for every reason other than fleeing war or persecution.” (Emphasis in original.) Migrants, here, are considered to be part of a diverse, residual category of people who have in common the fact that they are not refugees.

Numerous international organizations and media outlets use the inclusivist definition of migrants. The International Organization for Migration (IOM), for instance, defines a migrant as:

any person who is moving or has moved across an international border or within a State away from his/her habitual place of residence, regardless of (1) the person’s legal status; (2) whether the movement is voluntary or involuntary; (3) what the causes for the movement are; or (4) what the length of the stay is.

IOM’s former director, William Swing, simplified matters as such: “All refugees are migrants, but not every migrant is a refugee.”

Another UN organization that holds an inclusivist view is the United Nations Department of Economic and Social Affairs (DESA). DESA notes that “most experts agree that an international migrant is someone who changes his or her country of usual residence, irrespective of the reason for migration or legal status.”

Media outlets, such as the BBC, also follow an inclusivist definition of migrants:

The BBC uses the term migrant to refer to all people on the move who have yet to complete the legal process of claiming asylum. This group includes people fleeing war-torn countries such as Syria, who are likely to be granted refugee status, as well as people who are seeking jobs and better lives, who governments are likely to rule are economic migrants.

The number-one advocate of the residualist view of migrants is the United Nations High Commissioner for Refugees (UNHCR). UNHCR’s viewpoint is that both terms, refugees and migrants, “have distinct and different meanings, and confusing them leads to problems for both populations”. According to UNHCR, refugees “are persons fleeing armed conflict or persecution” while migrants “choose to move not because of a direct threat of persecution or death, but mainly to improve their lives by finding work, or in some cases for education, family reunion, or other reasons. Unlike refugees who cannot safely return home, migrants face no such impediment to return.”

But, as Carling points out, “migrants are people who change their country of residence regardless of their reason for moving. Some migrants had to flee home, they are refugees.” It is understood that UNHCR’s mission is to help refugees. Unfortunately, says Carling, “the meaning of ‘migrants’ is being twisted by UNHCR”:

To sum things up, the terms “migrants” and “refugees” are not interchangeable. Those who follow the inclusivist view are not denying the distinction between the two groups, they are merely underlining the fact that refugees are only a subcategory of the general category of migrants. So, saying “refugees and migrants” falls under the residualist view since it implies that refugees are not migrants. Alternative formulations in line with the inclusivist view are available, such as “migrants, including refugees” or “refugees and other migrants”.

The meanings of words matter, especially when it comes to the subject of migration, which is highly politicized these days. Humanitarian organizations, such as UNHCR, are pushing their agenda forward amid these policy quarrels. What is important to keep in mind, however, is that most migrants are not fleeing danger but are seeking better opportunities. But more and more migrants are falsely claiming persecution simply to get into a country.