Endangered at the Border

When Americans picture illegal animal smuggling, they may imagine black markets in distant, underdeveloped nations, but the reality hits closer to home. The United States is one of the top destinations for illegally trafficked animal goods, and every year thousands of illicit animal products are smuggled across both the northern and southern border and into various American ports.

One cannot explain the full story of animal smuggling without looking at its close ties to illegal immigration and border security. Animal smugglers and human smugglers are often connected to the same cartels, travel the same routes, and require many of the same federal resources and personnel to combat. The prevalence of smuggled live animals originating in Latin America highlights the need for border enforcement solutions to jointly tackle animal and human trafficking.

In this report, we analyze over 30 years of government data on live endangered animal imports seized in the United States.1

High-profile animal seizures at the southern border have been repeatedly making headlines. In May 2018, for example, three aliens crossed the border into Texas with a black duffel bag, which they abandoned when they realized there were Border Patrol agents nearby. When agents searched the bag, they discovered an unconscious tiger cub. The tiger was turned over to a zoo in Brownsville, Texas, where it was nursed back to health. Many other smuggled animals have not been so lucky.

Due in part to the long history of sensitive animal seizures such as that one, the United States and 178 other nations signed on to a multilateral treaty entitled CITES, or the Convention on International Trade in Endangered Species of Wild Fauna and Flora, otherwise known as the Washington Convention, in 1975. At the time, the international community was particularly interested in combating the depletion of animal populations for luxury goods such as furs, but the Convention's primary goals have since expanded to target a much broader range of products and species.2

Under CITES, all signatory countries track the illegal trade of endangered animal products within and between their borders, and publicly report their findings. In the United States, the U.S. Fish & Wild Service, an agency within the Department of the Interior, is responsible for CITES implementation, reporting, and enforcement. FWS has wildlife inspection agents positioned at all major U.S. ports and has agents positioned across both the southern and northern borders who coordinate closely with Customs and Border Protection (CBP). Such cooperation highlights the hand-in-hand relationship that human and animal trafficking share.

Analysis of CITES/FWS seizure data provides insight into changing trends among live endangered animal trafficking into the United States. Our data begins in 1982, the first year for which full CITES seizure data is available online.3

Seizures peaked sharply during the 2008-2009 economic crisis, and have steadily declined since. However, seizures remain significantly higher than the average of approximately 100 seizures per year in the several decades leading up to the economic crisis. Overall, there were 4,968 seizures between 1982 and 2016. The most recently released full-year data for seizures is for 2016, in which 148 live endangered animal seizures took place.

One hundred and fifty-four different nations have exported live, endangered animals to the United States over the tracked period, but the large majority come from a small number of nations. The top five exporters — Indonesia, Mexico, Australia, Tonga, and Canada — combined account for nearly half of all seized shipments. The top-10 trafficking nations combined account for 60 percent of the shipments. In other words, while the total number of shipments is quite high, this is a problem concentrated in a relatively small number of places. 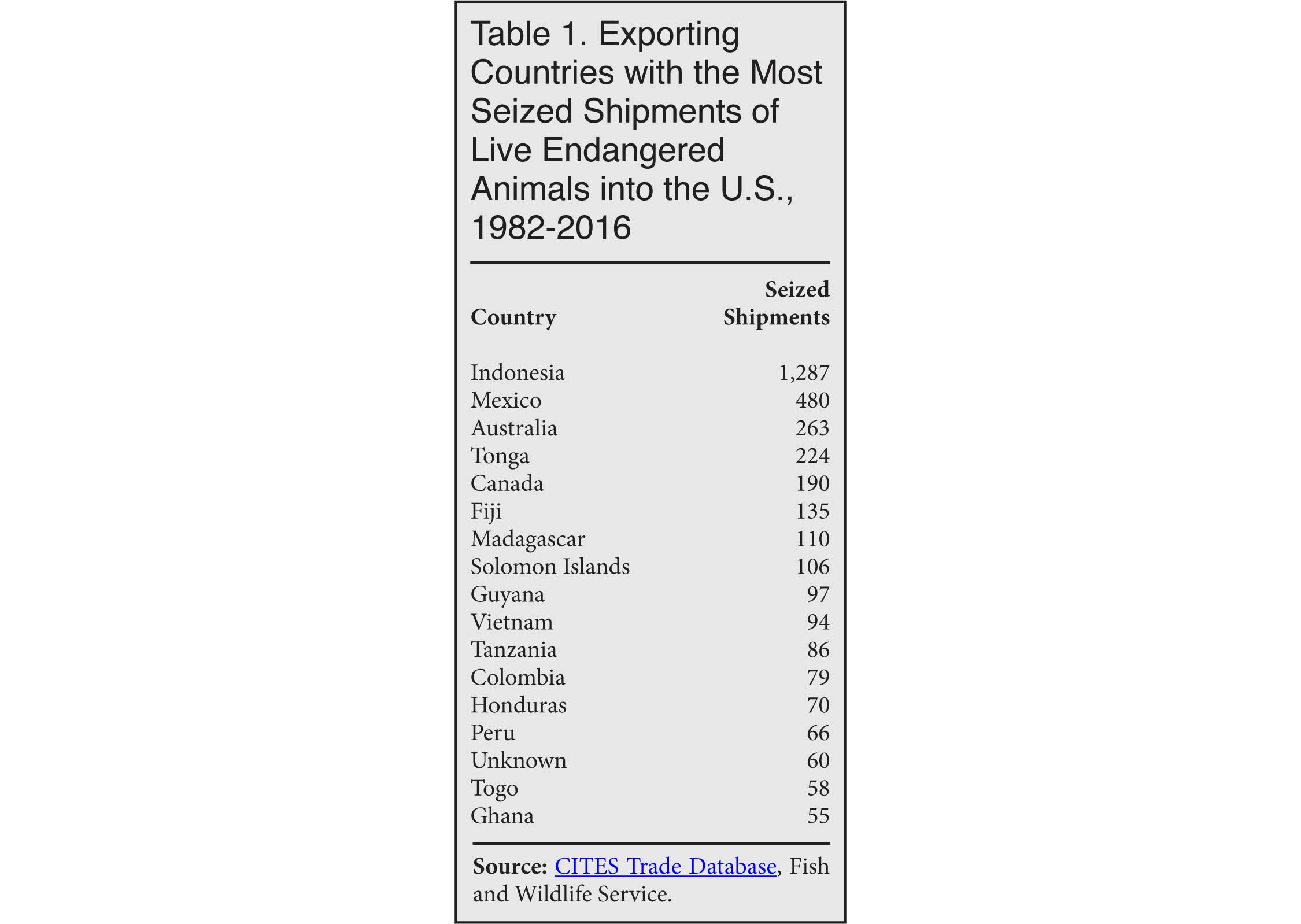 Which Live Animals Are Being Smuggled?

Animals belonging to 386 different genera and 127 different families have been seized in the 1982-2016 period, but several species show up much more prominently in the data.

A whopping 42 percent of the live endangered animal species are of coral, particularly stony corals. Many of these coral shipments come from the Coral Triangle, a triangular area of tropical marine waters around Indonesia and Malaysia.

Overfishing, tourism, and habitat destruction have left many species in the Coral Triangle under threat, which are now tracked under CITES. Beyond coral, popular animal shipments include parrots, particularly the colorful, hook-billed species collectively known as "true parrots", and lizards, particularly iguanas. While some birds and lizards are resold for commercial purposes, the majority are kept as pets. 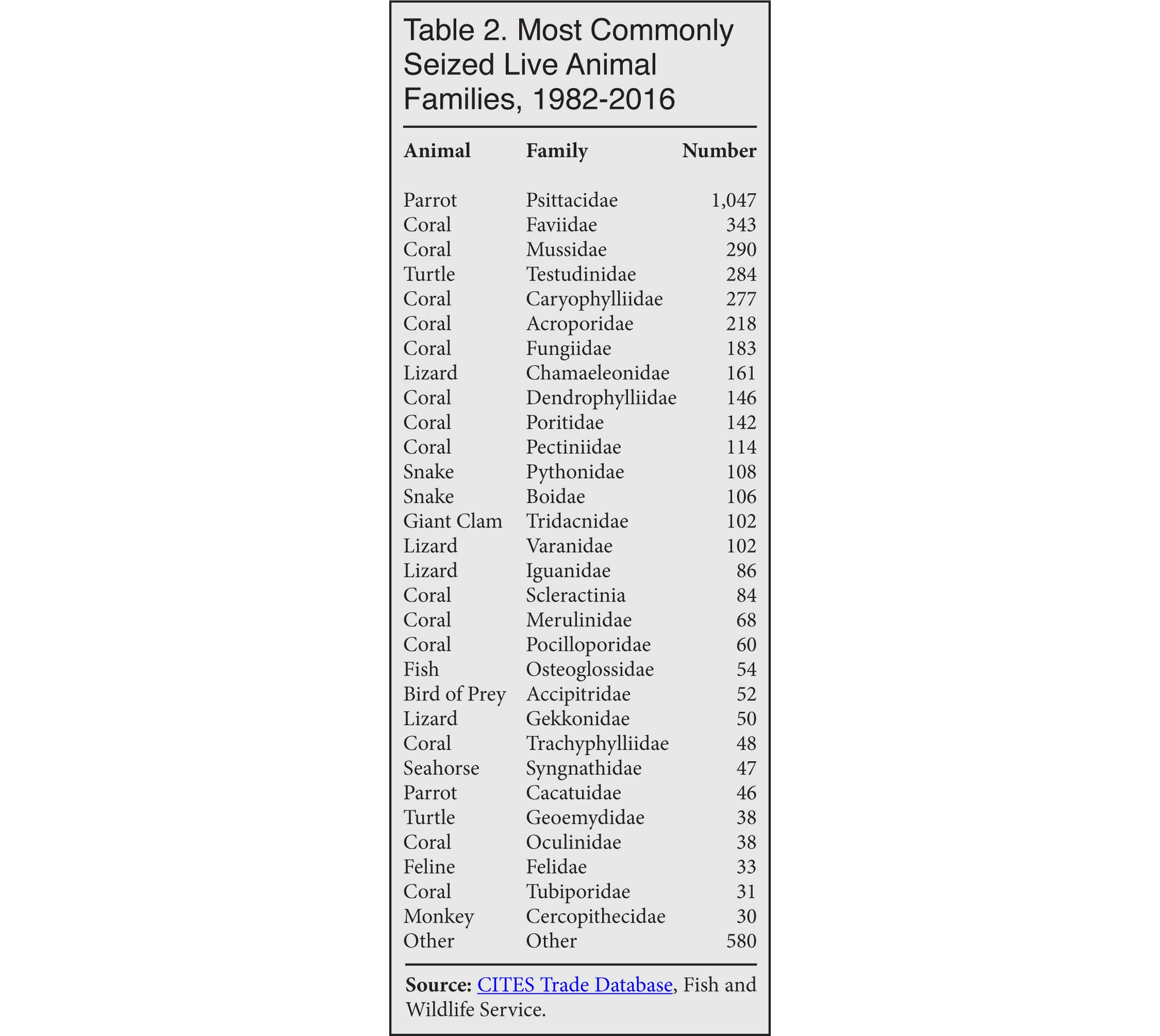 Of the 4,968 live endangered animal seizures, 257 have been Appendix I species — primarily freshwater fish and several species of parrots including scarlet macaws, Cuban amazons, and yellow-shouldered parrots.

Coral Trafficking Has Driven the Changes in Live Animal Seizures

While seizures of various species of animals increased during the economic crisis of 2008-2009, the bulk of the increase was driven by coral seizures, especially from Indonesia, specifically, and Asia more broadly. All stony and blue coral species were added to CITES' Appendix II in 1985 over rising concerns about the fragility of coral ecosystems. These groups of species account for nearly all U.S. coral seizures.

In the 1980s to early 2000s, less than one-quarter of all seized shipments were coral. But now, over half of all seizures are coral. However, while the proportion of coral remains high, the total number of coral shipments seized has declined since 2009. 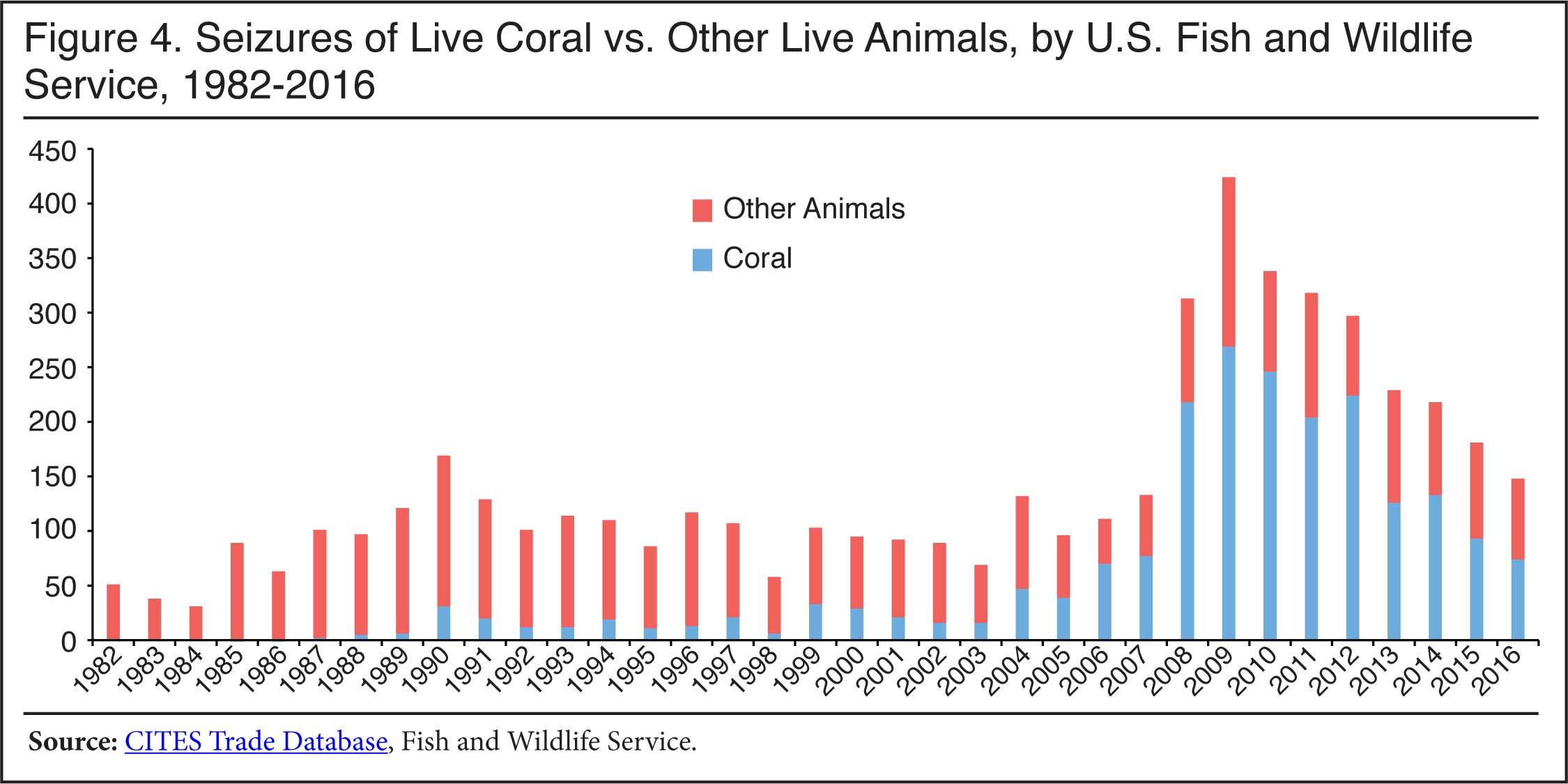 The government has completed several high-profile crackdowns on coral traffickers in recent years that have likely contributed to the decrease in the illicit trade of CITES-protected coral. In 2013, a former jewelry company executive and Virgin Islands resident was handed $1.1 million in fines and a short jail sentence for trafficking black coral via Taiwan. The same year, the co-owner of one of the largest live coral import businesses in the United States was fined over $500,000 for mislabeling and smuggling CITES-listed stony corals into the country. Most recently, in 2017 a federal grand jury returned an indictment charging an individual with stripping CITES-protected corals from Vietnam and smuggling them into the United States via hidden air cargo shipments.4

Overall, fluctuations in coral seizures — which spiked during the economic crisis and declined after the federal government's crackdowns — explain the majority of the year-to-year changes in the data, as other live animals have been smuggled at relatively consistent rates.

In February 2017, President Trump signed an executive order entitled "Enforcing Federal Law with respect to Transnational Criminal Organizations and Preventing International Trafficking".5 The order redirected more resources to the identification of transnational criminal networks. In the order, the president noted that the same criminal networks are often jointly responsible for "the illegal smuggling and trafficking of humans, drugs or other substances, wildlife, and weapons."

In fact, over one-quarter of all animal products and live animals smuggled into the United States come from Latin America, making the southern border a hot-spot for wildlife seizures. According to FWS, some of the biggest entry points include San Diego, El Paso, and Nogales, Ariz. It is no coincidence that these cities are also hot-spots for illegal immigration. 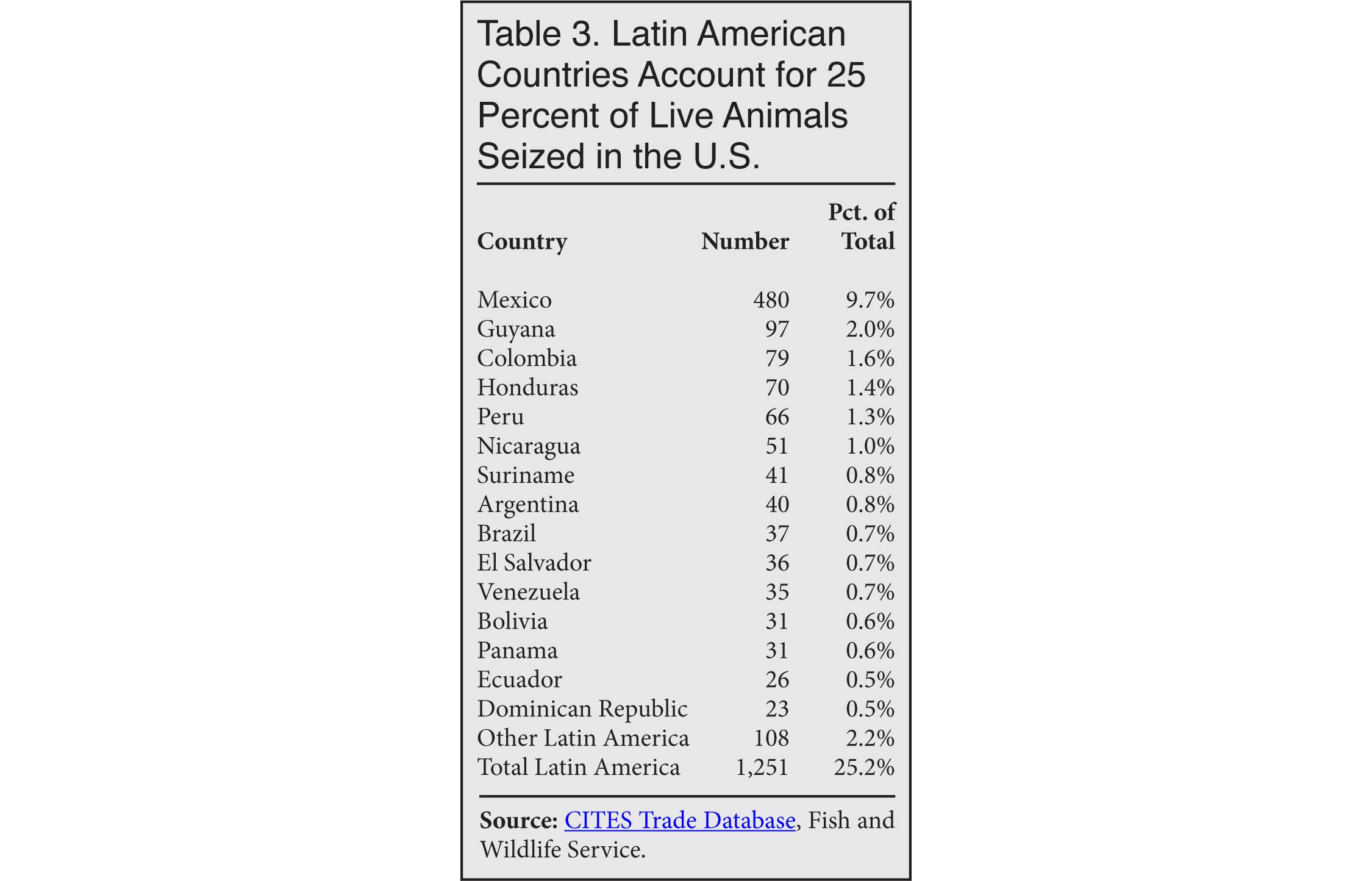 Both human and animal smugglers often enter the country via Mexico. According to the Government Accountability Office (GAO), of the top-10 U.S. ports for seized wildlife shipments between 2007 and 2016, six are cities in southern border states (Los Angeles, San Francisco, El Paso, Dallas, Houston, and Miami). Further, all five of the metro areas with the largest illegal immigrant populations — New York, Los Angeles, Houston, Dallas, and Miami — are among the top ports for wildlife seizures. While this is of course also due to population size, the fact remains that wildlife and human smuggling occurs in many of the same major urban areas. 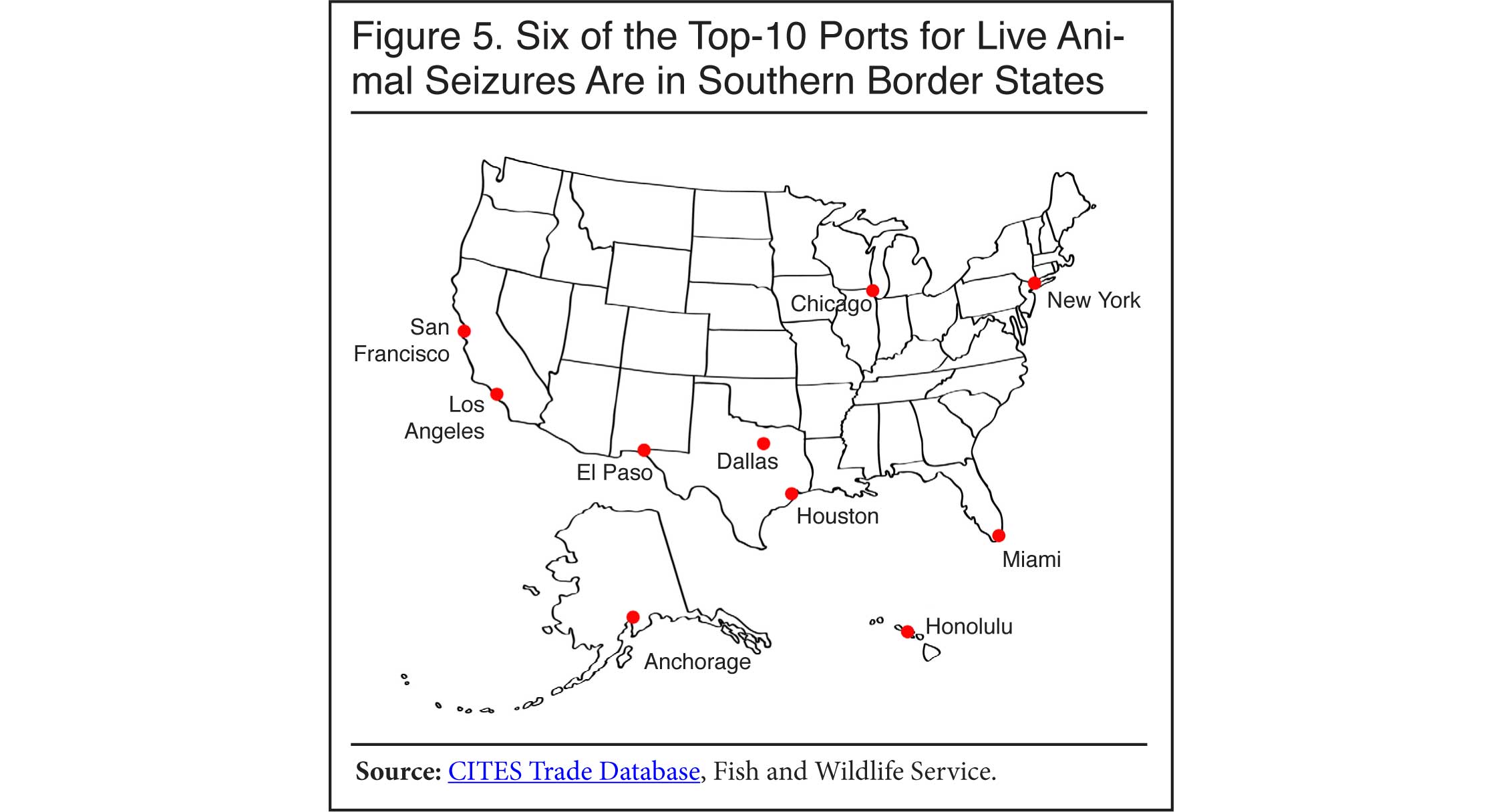 Additionally, one of the ways in which cartels smuggle drugs across the border is by using animals. While FWS/CITES data does not provide information on how many of the animals seized were being used as drug mules, there have been several high-profile cases.

Perhaps the highest-profile case yet came this spring, when a Spanish veterinarian was charged with collaborating with a Colombian drug cartel to surgically place packets of heroin inside puppies. The drugs were shipped from Colombia to his clinic in Spain, and then from Spain to the United States, with each puppy holding roughly one pound of heroin in its belly. The veterinarian was charged after evading American authorities for over a decade. The authorities ultimately arrested 21 people across Colombia and the United States, and seized $2 million of heroin.6

Overall, such cases highlight the inseparable connection behind animal smuggling and other forms of trafficking, from illegal aliens to drugs.

Animal trafficking highlights serious vulnerabilities at America's ports, but the issue is not unsolvable, and some steps have already been taken.

The biggest single-year decrease in live animal seizures was in 2013, when the number of coral seizures fell by nearly 100 from the previous year. It's almost certainly not a coincidence that this was the same year that the Fish and Wildlife Service concluded several of its most high-profile crackdowns on smugglers of CITES-protected coral.

Further, the government's passage of the Eliminate, Neutralize, and Disrupt (END) Wildlife Trafficking Act in 2016 elevated animal trafficking to the same level of offense as trafficking in drugs or weapons. The 2017 CITES data will likely reveal the degree to which the act was effective.

The number of non-coral live animal seizures has declined since 2009, but remains well above pre-recession levels. Publicizing crackdowns with serious fines on traffickers of other CITES-protected animals such as true parrots or turtles might have a similar deterrent effect, and help return overall live seizures to pre-2008 levels.

While the legislation mentioned above will likely have an impact, wildlife trafficking legislation at the local and state levels are still lacking. Most border states do not yet have multi-species legislation on the books against animal smuggling. When debating such solutions, lawmakers ought to consider the wide-ranging impact of animal smuggling on everything from vulnerable species populations to international criminal organizations to illegal immigration.

1 The CITES Trade Database can be found here.

3 The first year of accessible CITES data is for 1979, but it is highly incomplete and contains only a few entries; 1982 is the first year with complete data across a range of species.