By Jessica M. Vaughan and Preston Huennekens on January 11, 2018

Jessica Vaughan is the director of policy studies and Preston Huennekens is a research assistant at the Center for Immigration Studies.

On December 11, 2017, Akayed Ullah strapped a homemade pipe bomb to his chest and entered the New York subway system. According to news outlets, Ullah is a 27-year-old immigrant from Bangladesh who came to the United States legally through chain migration. Specifically, he arrived after his aunt or uncle won the visa lottery and then, in turn, sponsored his mother for an immigrant visa. She was able to bring him along as her "child", even though he was 20 years old at the time.1 The family, numbering five or six people, arrived in 2011.

Table 1 breaks down annual immigrant visa issuance data from the State Department between 2000 and 2016, and Figure 1 shows chain immigrants as a share of the total population of immigrants from Bangladesh from 2000 to 2016. 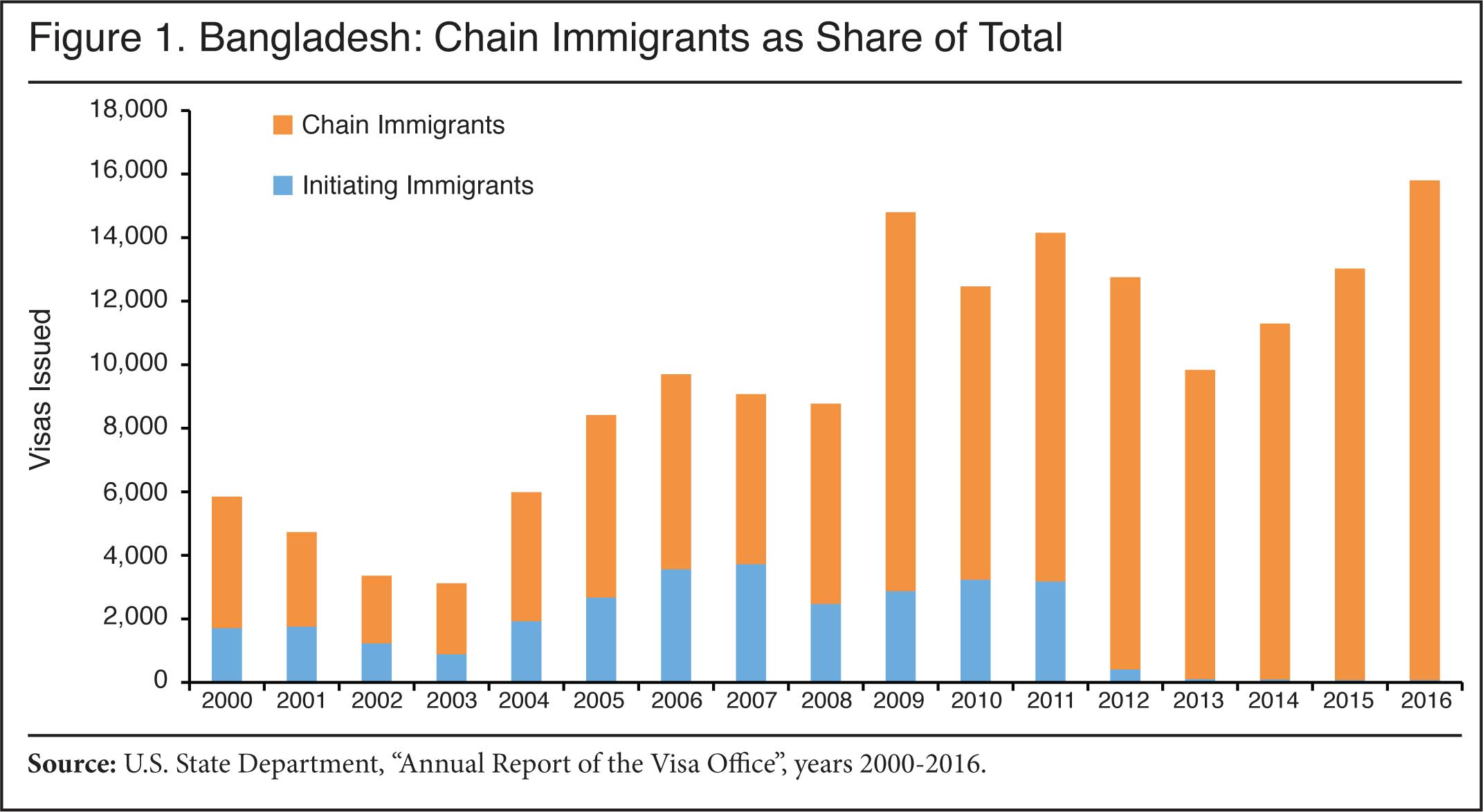 In the last decade, the number of initiating immigrants (that is, immigrants who are the first in their family to immigrate to the United States) from Bangladesh was steady until 2012, after which Bangladesh was disqualified from the visa lottery program. Meanwhile, the number of chain migrants generally rose over the same time period, as prior arrivals in all categories sponsored additional relatives. Very few Bangladeshis immigrate to the United States as self-sponsoring skilled immigrants or employer-sponsored immigrants. The State Department has issued only 2,633 employment-preference immigration visas to citizens of Bangladesh since 2000, accounting for 1.61 percent of all Bangladeshi immigrant visas in that time. Most arrive because of chain migration.

Applying methodology developed by demographers at Princeton University, the State Department data indicates that the average immigrant from Bangladesh sponsored an average of 4.44 additional immigrants between 2000 and 2016.5

Reports indicate that Ullah's initial immigrating family member arrived in the United States because of the visa lottery. Citizens of Bangladesh were able to take part in the visa lottery between 1995 and 2012. In that period, a total of 42,462 individuals came to the United States through the program. (See Table 2.) This represents 4.87 percent of all lottery visas to the United States during that time period. The combination of the visa lottery and family-based (primarily chain) migration caused total immigration from Bangladesh to swell, to the point that the State Department finally removed the country from list of foreign states eligible to enter the lottery, effective beginning with the 2013 lottery. 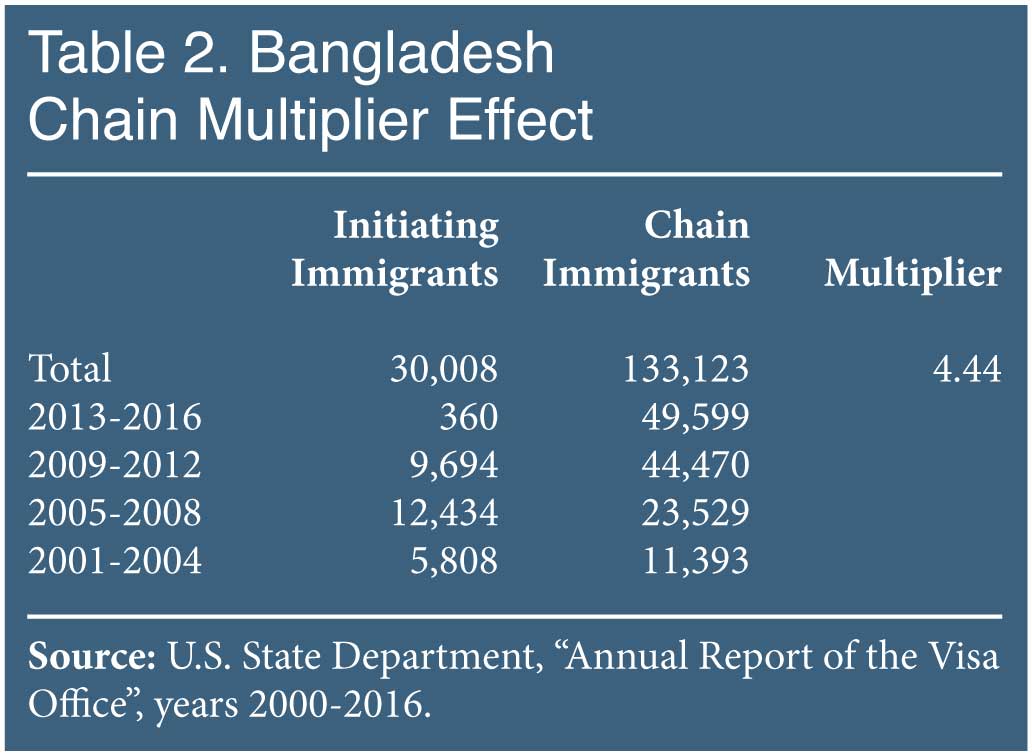 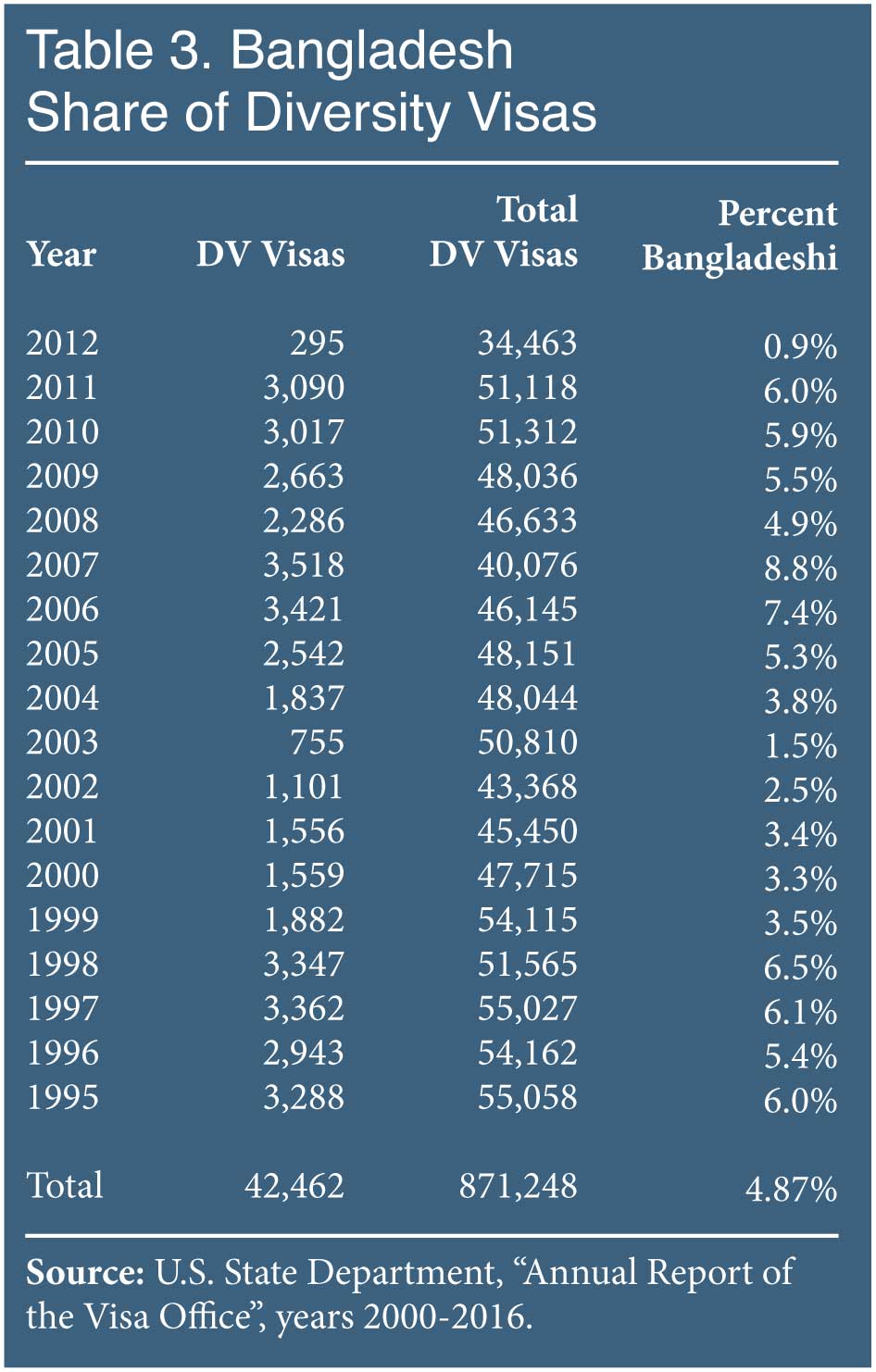 Ullah's failed attack and the earlier successful attack by another visa lottery beneficiary, Sayfullo Saipov in October, has led to increased scrutiny of the visa lottery program and chain migration, and questions as to whether these immigration programs serve the national interest. The Department of Homeland Security has noted that two other alleged terrorists charged in recent weeks came to the United States through chain migration. One, Zoobia Shahnaz, has been charged with bank fraud and money laundering to support ISIS, and the other, Ahmed Amin El-Mofty, was arrested in the shooting of two Harrisburg, Pa., police officers.6

With the support of the Trump administration, Congress is actively considering legislation such as the RAISE Act (S. 354), which would terminate the visa lottery entirely and restrict chain migration to spouses and minor children, which is in line with the policies of most other countries including Canada and Australia.7

1 For more on the visa lottery, see the Center for Immigration Studies website.

7 For more on the RAISE Act (S.354), see the Center for Immigration Studies website.