By Jessica M. Vaughan and Preston Huennekens on September 6, 2018

Jessica Vaughan is the director of policy studies and Preston Huennekens is a research associate at the Center for Immigration Studies.

The latest edition of the Department of Homeland Security's annual "Entry/Exit Overstay Report" finds fewer overstays in 2017 than in 2016 overall.1 The numbers also indicate that visa holders in certain categories, especially student and exchange visitors, and travelers from some countries overstay at much higher rates. This suggests that not only is there great need for interior enforcement to hold overstayers accountable, but that the State Department needs to adjust its visa issuance policies to better screen visa applicants to prevent these visa mistakes.

Recent public discussion of border security has been focused almost exclusively on the influx of families and minors over the Southwest land border. The DHS overstay report is an important reminder that visa overstays are occurring on a similar scale to illegal border crossings and represent a similar threat to the integrity of our immigration system.

The DHS report tracks overstays for travelers entering by air and sea on the most common types of temporary visas and under the Visa Waiver Program (VWP). Numbers of overstays and overstay rates are calculated for every country and sorted by the type of nonimmigrant visa used: standard short-term visas for business or pleasure (B-1/B-2); VWP visitors; student and exchange visas; and other temporary visas, which are primarily employment-related.

DHS identifies a visa overstayer as a "nonimmigrant who was lawfully admitted to the United States for an authorized period, but who remained in the United States beyond his or her authorized period of admission." The report provides a count for the total number of overstayed admissions and also breaks down the numbers according to those who have departed and those with no record of departure; i.e. those believed to remain in the country. Here, we focus on the total number of overstays, whether departed or not.

It is important to point out that the methodology used by DHS counts entry and exit events, not individual travelers, and so it calculates an overstay rate that is artificially and deceptively low. It does not represent the actual percentage of people receiving visas who overstayed. This is because there are a significant number of individual travelers who enter and exit the country multiple times in a year, and are largely compliant. With a methodology based on admissions, these frequent and compliant travelers skew the numbers. For example: If 10 people are admitted to the United States for three visits each and all are compliant, that is counted as 30 admissions. If one additional person is admitted and overstays, that is counted as one admission. Using the DHS methodology, in this case the overstay rate would be 1/31 entries, or about 3 percent. In contrast, the overstay rate based on counting people would be 1/11, or about 9 percent.

The rates, even if understated, indicate which particular countries and categories have relatively high incidents of non-compliance with visas. High rates indicate that policy adjustments could be in order. Even if rates are low for a country or category, high numbers of overstays will have an impact on the size of the illegal population.

It is possible that the number and rates for Canada and Mexico may be somewhat inflated, due to the fact that they are contiguous countries and some share of the travelers may be entering by air or sea and departing by land, and so their departure would not be matched to their arrival. In addition, the air and sea travelers captured in the DHS report are less than 2 percent of all travelers from Canada and Mexico; 98 percent enter by land and are not counted in this report at all.

DHS identified just over 700,000 overstays in 2017. This is a decline of about 5 percent from 2016 (see Table 1). According to the report, about 15 percent of these travelers departed the country and about 85 percent were believed to still be in the country illegally (the methodology excludes overstays who subsequently obtained another legal status).

Overstays increased in two categories: regular short-term visitors ("Non-VWP Countries Business/Pleasure") and guestworkers ("All Other In-Scope Nonimmigrants"), although the rates improved in every other category.

Nearly two-thirds of the overstays (64 percent) were by citizens of 15 countries, which are listed in Table 2. (See section above regarding Canada and Mexico.)

The Visa Waiver Program (VWP) allows nationals of certain countries to travel to the United States for tourism or business for a period of up to 90 days without obtaining a visa.2 Countries on the VWP have met various requirements set forth by the U.S. government, such as low rates of unqualified applicants, e-passports, enhanced law enforcement and security-related data sharing with the United States, and high security standards for customs and border security.

Table 3 shows the top-five VWP country overstay numbers and rates. While the rates tend to be low because of the large number of visits under VWP (22.5 million in 2017), the program still generates a significant number of overstays in total (more than 131,000 in 2017). Each country has a unique data story. For instance, France and Germany both have a high number of overstays, but France's numbers grew over 37 percent from last year whereas Germany's fell by over 45 percent. 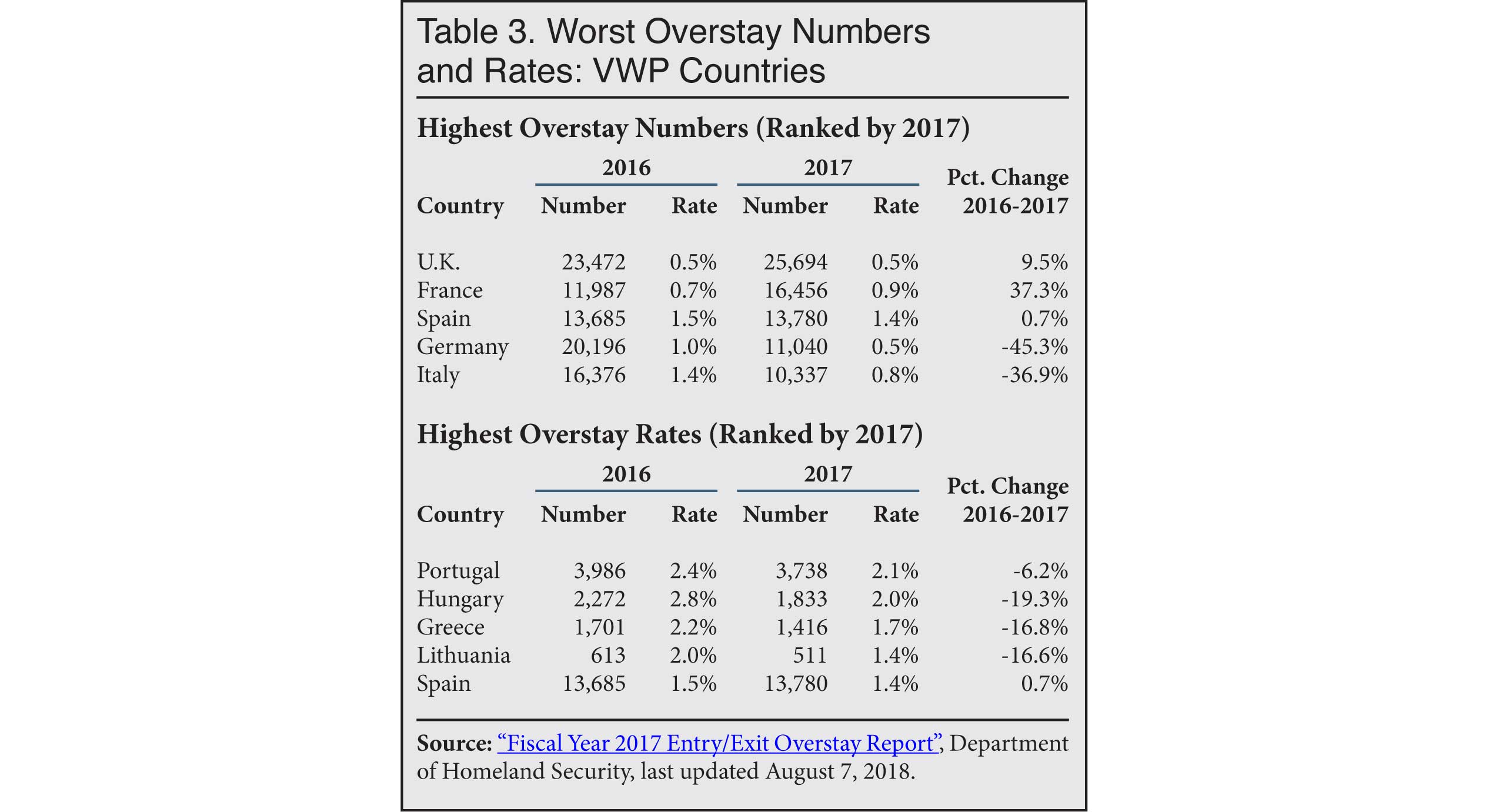 Portugal and Hungary have rates over 2 percent. This relatively high rate triggers a requirement that these governments must implement a public information campaign to encourage better visa compliance. Failure to improve could mean that these countries will lose visa waiver privileges.

Citizens of most countries must obtain a visa to travel to the United States. There are fewer visits in this category (14.7 million in 2017) than in the VWP category, but there were more than double the number of overstays. 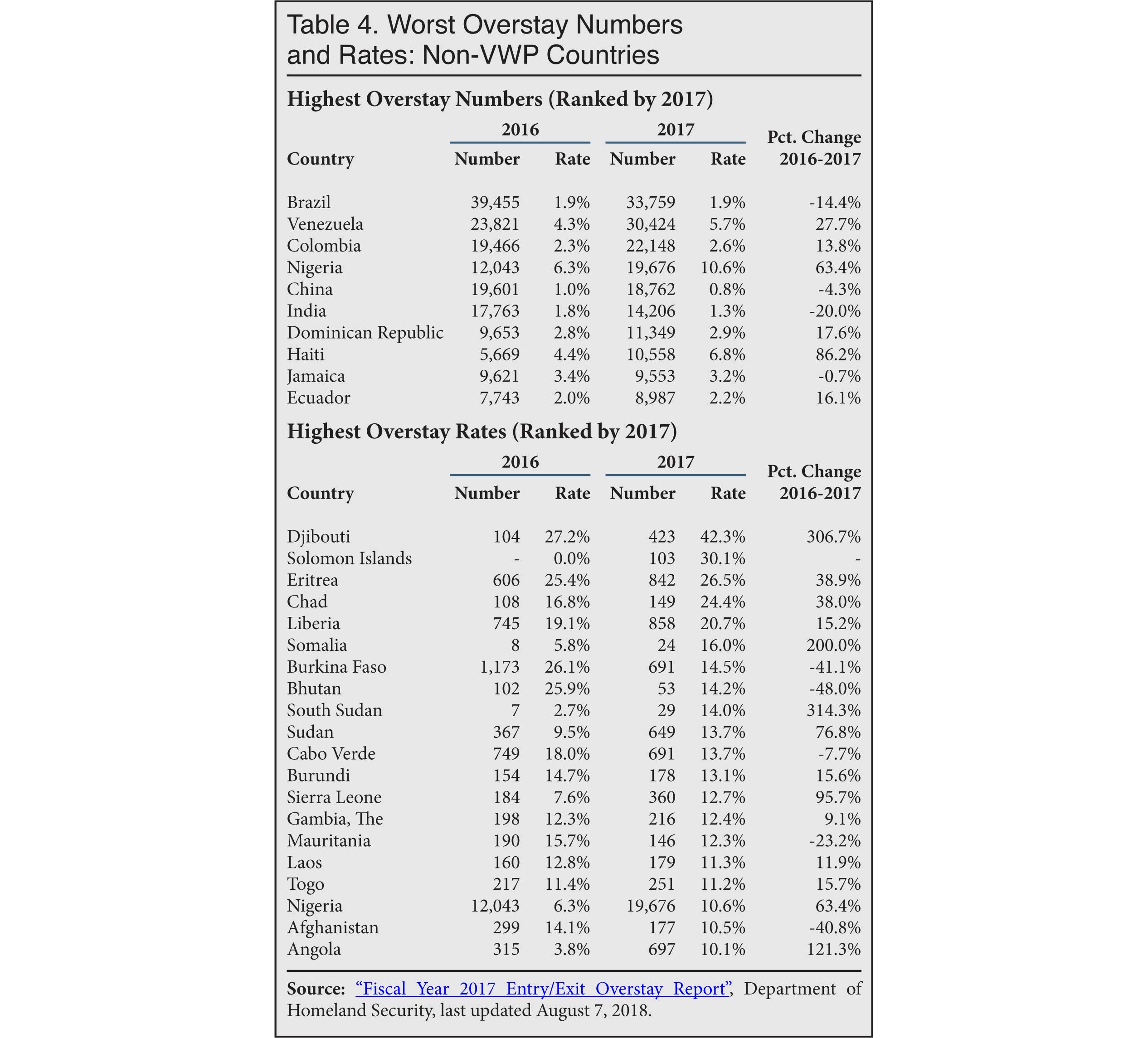 The number of overstays from several countries increased dramatically from 2016 to 2017, including Nigeria and Haiti.

Twenty countries had regular short-term visitor overstay rates of more than 10 percent in 2017. Five had overstay rates over 20 percent. Fortunately, with the exception of Nigeria, few visas are issued in these countries, although clearly there should be fewer.

DHS reported that in 2017 it expected approximately 1.7 million departures by visitors who had entered on student or exchange visitor visas. The vast majority entered on regular student visas (1.2 million), followed by exchange visitors (475,000), and vocational students (15,500).

This category produced nearly 70,000 overstays out of the 1.7 million expected departures, resulting in the highest overstay rate of all the categories analyzed by DHS.

The country with by far the most overstays was China, with over 15,000. The top-five countries were responsible for more than 40 percent of the total (See Table 5). 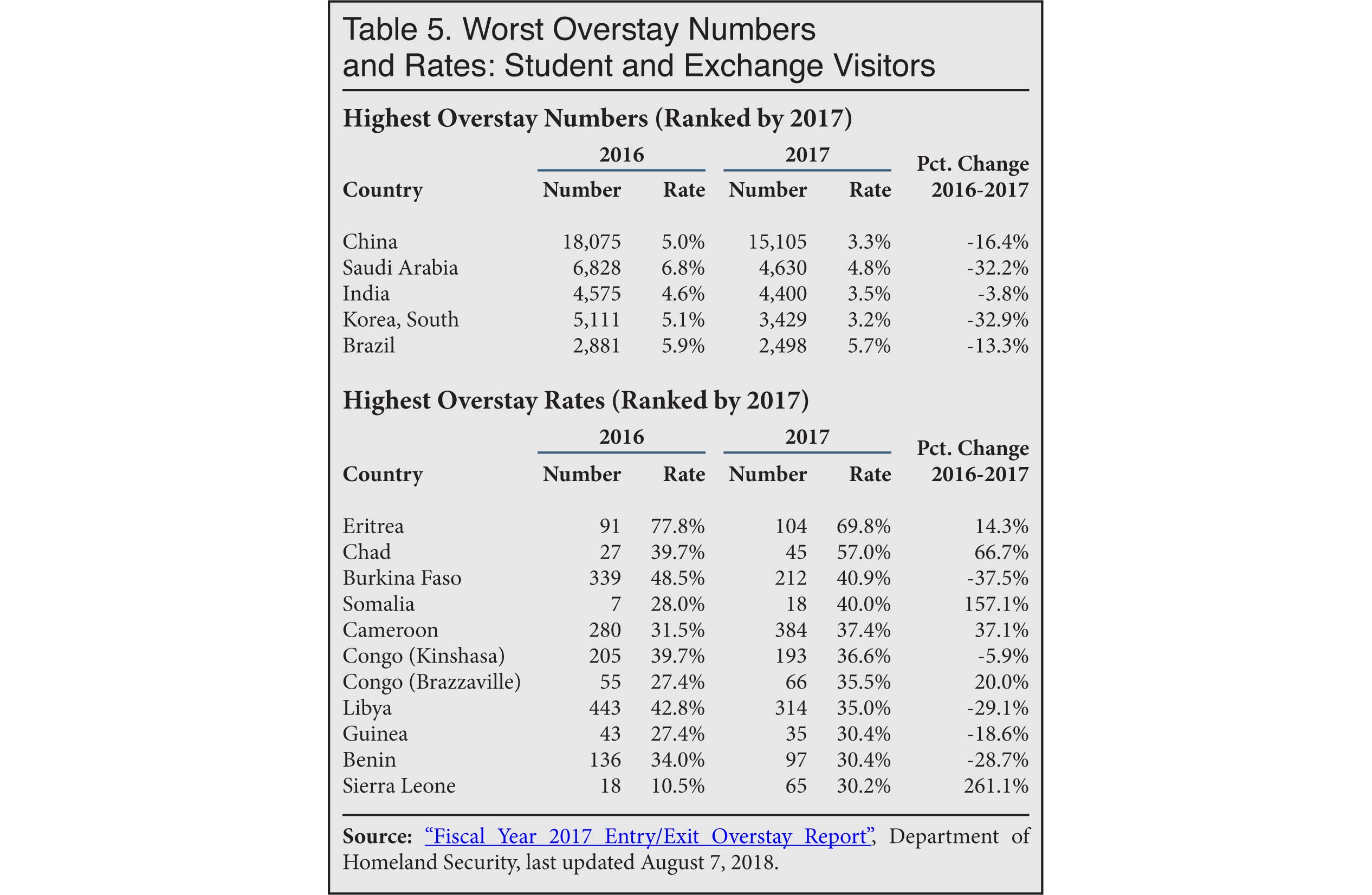 The "Other" category reported by DHS consists of the various remaining non-immigrant categories, most of which are guestworkers or other employment-related visas, but also a few "pre-immigrant" categories such as fiancées.

As with the student visas, there are a large number of countries with very high overstay rates in the "Other" category (see Table 6). 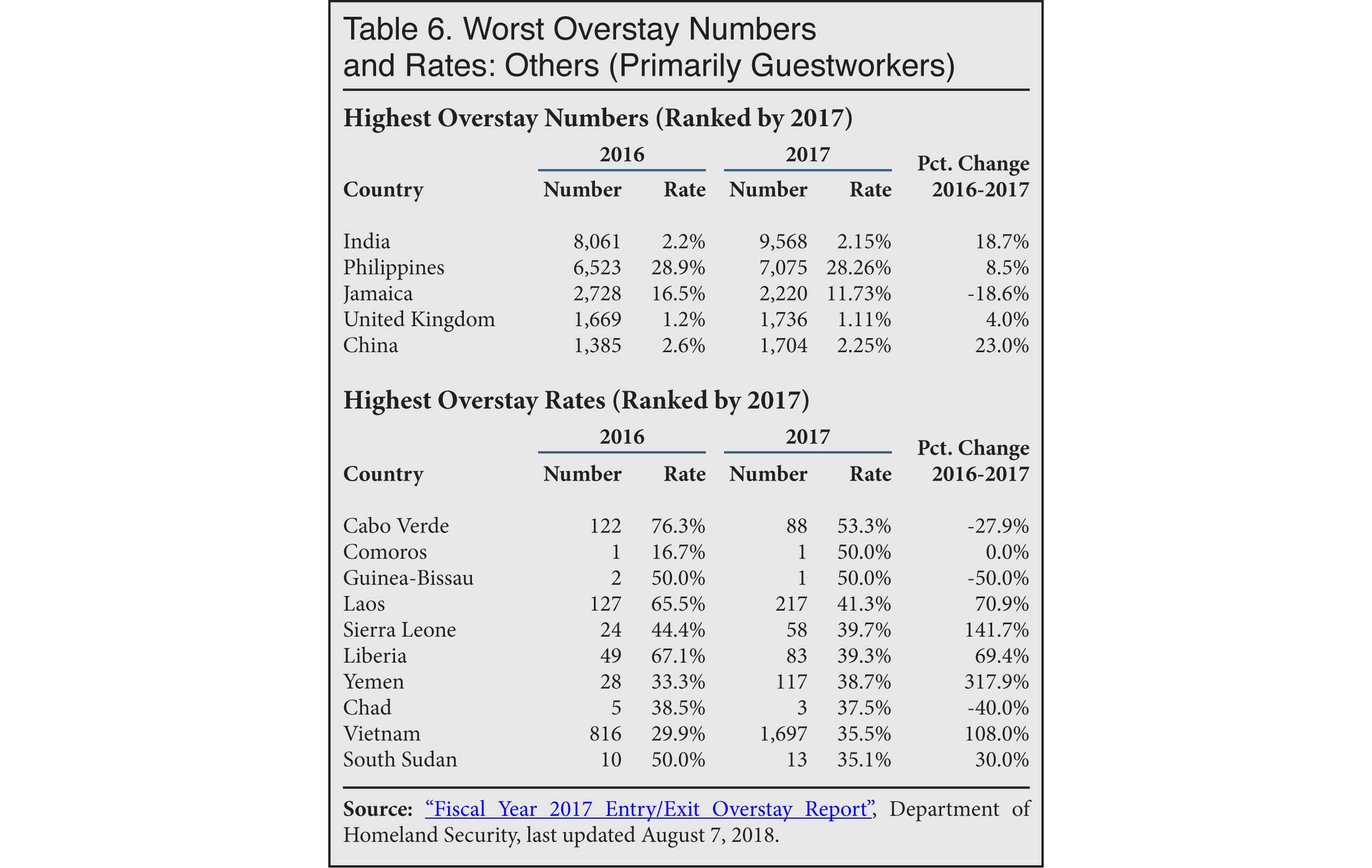 The DHS report confirms that overstays remain a serious problem for the integrity of our immigration system and potentially for national security. Even though many of those visitors who overstayed initially were found to have eventually departed or adjusted to a legal status over a period of several months, still more than 420,000 of the 2017 overstays had not done so by May 1, 2018, and are believed to have remained in the country. They may be here to work, to join family members, or for criminal or other nefarious reasons.

The development of systems to collect and analyze departure data, in order to learn the scale and nature of the problem, is just the first step toward addressing the overstay problem. It must be a multi-agency effort involving the State Department and DHS component agencies to accomplish improvements in the visa issuance process, traveler compliance, and enforcement actions to impose consequences on those who overstay.

The State Department should make adjustments to the process for issuing non-immigrant visas in the problematic countries and categories of visas. This should include establishing tailored benchmarks that require enhanced scrutiny and vetting of visa applicants above and beyond what is the standard in countries and categories that have higher rates of compliance. This could be further informed if the State Department did additional analysis, such as by extracting samples of actual visa cases and examining details such as claims made by the applicants, documents submitted, travel history, and other relevant facts that will assist consular officers in better decision-making.

In addition, the State Department must begin holding consular officers, their supervisors, and post leadership accountable for overstay problems and for failure to improve.

The government has already implemented a system that notifies VWP travelers of the pending expiration of their authorized duration of stay. If this program proves to be effective, this system should be expanded to eventually cover all temporary visitors.

These enforcement efforts are complicated by the fact that the law provides most overstayers — with the exception of VWP visitors — with more due process protections than illegal border-crossers, including the right to an immigration court hearing. In contrast, illegal border-crossers often can be subjected to expedited removal, which includes detention and no right to a hearing in most cases. As a condition of entering without a visa, VWP visitors are required to sign a form that waives their right to an immigration hearing.

Above all, reducing opportunities for overstayers (and illegal border-crossers) to secure illegal employment could be the most effective deterrent of all. The expansion of E-Verify and more robust worksite enforcement in general are the most direct ways to accomplish this.