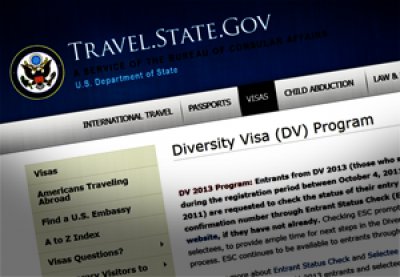 Readers of these pages have learned that the Diversity Visa Lottery has produced immigrants with modest human capital, has set in motion chain migration where it was unknown before, and has brought us a terrorist or two.

So say the critics of the program, but what, one might ask, do friends of the program have to say about the same subject? (The answer may surprise you.)

In this case the friend of the program is Dr. Onoso Ikphemi Imoagene, who has one degree from the University of Ibadan in Nigeria, another from Cambridge, and two, including a PhD, from Harvard. She is an assistant professor of sociology at another Ivy League school, the University of Pennsylvania.

Imoagene has recently published an article in International Migration, the scholarly journal of Switzerland-based, open-borders organization the International Organization for Migration. The article was entitled "Affecting Lives: How Winning the US Diversity Lottery Impacts DV Migrants Pre- and Post-Migration" (largely behind a paywall). Note the "for" in the organization's name, and the focus in the title on the migrants, rather than their impact on the United States.

From her credentials, her ties to IOM, and the title of her article, one can safely assume that Imoagene is not a restrictionist. Her report is based on lengthy interviews with 61 visa lottery winners from Ghana and Nigeria.

It's an interesting article. She makes the point that most of the visa lottery winners are quite unprepared to come to the United States, that many are in college when they win, and that winning thus disrupts their education. Further, she states that the whole visa lottery process — which must be completed in a year — is different from many other migration processes that are smoother because of the opportunity for advanced planning. She indicates that most visa lottery winners have scant support networks in the United States and recommends that they receive government-funded, refugee-like services from our refugee-support systems.

I must admit I had never thought of the relative abruptness of the visa lottery process and I suspect the congressional creators of the program, some years back, had not either. Their assumption must have been, "Hey, here's a visa to the United States that everyone wants and there is nothing needed beyond the visa."

Back to her article. While it focuses on the matters noted above, it also contains two grittier elements.

Of the 61 respondents (admittedly not a random sample) seven of the winners presumably sold a part of their visa, in effect, to another alien, making that person a spouse for visa lottery migration purposes. This process is described as "planned divorce (dissolution of temporary alliances)".

In addition, or perhaps overlapping, there were four instances of "Unexpected Divorce: (used for papers — asked for a divorce upon arrival in U.S., evidence of adultery as a DNA test proved child of union was not biological offspring)."

The role of phony children, as well as phony spouses, in this program has also been reported elsewhere.

So, seven to 11 of the 61 committed fraud, which the author has described in the softest of terms.

She also wrote: "[C]ontrolling for human capital and other variables, I found that in the pooled sample of immigrants from all over the world, DV migrants fared the worst of all immigrants across the four main classes of admission: employer-based, family reunification [i.e., chain migration], diversity visa, and refugees." (Emphasis added.)

The database she used for the comparison is the Princeton-run, NIH-funded New Immigrant Survey.

Thus, we have a distinguished friend of migration with splendid credentials, using a totally establishmentarian database, saying that as a class, the visa lottery migrants are the bottom of the barrel and that many of the winners engaged in fraud.

I am grateful to my CIS colleague, Preston Huennekens, for calling the article to my attention.