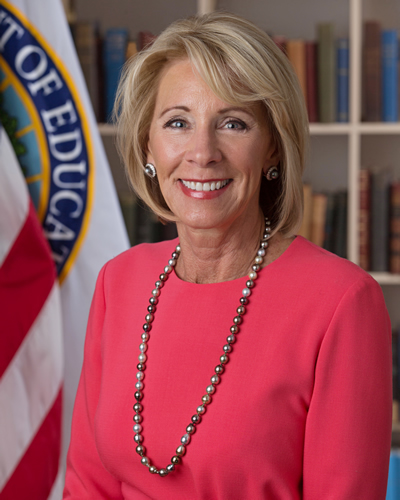 With one decision, Secretary of Education Betsy DeVos can preserve thousands of jobs for Americans and end an ongoing raid on trust funds for the elderly.

The decision affects a dark corner of the immigration business where her department plays a vital part.

There are some very marginal educational institutions commonly called "visa mills" that, like many other schools, are licensed by the federal government to cause the admission of foreign students. What distinguishes these visa mills is that they provide little education to the tens of thousands of foreign "students" they admit; instead, tuition payments buy the students access to a strange foreign-worker program that gives government subsidies to employers who hire alien students of, and graduates of, these marginal schools and others.

Through these subsidies employers are, in effect, paid to hire foreign students and alumni rather than American citizens and green card holders. The moneys for these subsidies are diverted from the Social Security and Medicare trust funds, thus taken out of the hides of older Americans.

Hard to believe, but true. This odd subsidy program, OPT, will be described later.

Back to the visa mills. Many of them pass themselves off as tax-free charities, while the managers scoop up multi-millions in tuition payments. One such operator — the retiring boss of Silicon Valley University — simply voted himself a retirement "loan" of $12.5 million, a loan apparently without interest payments or even a written confirmation from the school in question. That school, of course, continues to accept foreign students.

The multitudinous problems created by these schools were examined in a CIS report entitled "The Dregs of Higher Education Damage our Immigration System".

Sounds like something the Trump administration, and Republicans in general, would not tolerate for a moment, right?

It is just the kind of pro-alien, corrupt, left-wing, California-radical program that Jerry Brown would encourage, right?

Well, no, on all scores.

The opponents of these sub-par colleges include President Obama's last Secretary of Education, John King, some of his U.S. attorneys, and various state officials reporting to Gov. Brown (D-Calif.), or to former Governor Terry McAuliffe (D-Va.). And also some state officials in the administration of another of Virginia's former governors, Robert McDonnell (R).

Before outlining how DeVos can help solve the problem by shutting down these scandalous visa mills, a little more background is in order.

General Situation. The U.S. government does not play a direct role in the selection of foreign students coming here (as the British government does); it lets some 7,000 institutions, ranging from Stanford and the Ivy League to places teaching hairstyling or horseshoeing, to make acceptance decisions, monitored only slightly by the State Department's overseas visa-issuers. The government's standards for licensing these institutions — granting them the right to issue the I-20 form (that leads to the F-1 visa) — are minimal and that whole process is handled by a sleepy agency deep within DHS, the Student and Exchange Visitors Program (SEVP).

The leadership of SEVP has not changed since the election, and I suspect that no one from the Trump team has even set foot in its offices.

Neither federal law nor SEVP rules require that any of the 7,000-plus academic institutions that SEVP lets make admission decisions must be accredited by a U.S. Department of Education-recognized accreditation agency, but such accreditation is useful for other purposes, so even the least imposing of the visa mills seeks it. The bottom-dwelling institutions used to get accreditation from the Accrediting Council for Independent Colleges and Schools (ACICS).

Then in the dying days of the Obama administration, Secretary King ruled, following a years-long examination by agency staff and an advisory committee, that ACICS's standards were too low and that schools once accredited by ACICS had 18 months to get themselves a different accreditor. Many of the ACICS-only schools have since found one or have gone out of business, but some others fall into a different category: They have not found a new accreditor, but want to remain in business anyway, despite the DoED-imposed deadline of June 12, about 10 weeks from now.

OPT. Meanwhile, the Optional Practical Training (OPT) program for alien graduates of U.S. colleges (and the somewhat similar Curricular Practical Training (CPT) program for foreign students still in school) provides work permits while granting the employers of these aliens a 7.65 percent discount on their wages. OPT does this by waving a magic wand over alumni, making them students again for these tax discounts.

If the employer chooses to hire citizen or green card workers, the employer does not get the discount, hence it is an ongoing subsidy for employers who prefer not to hire Americans.

These OPT provisions, which also excuse the OPT workers themselves from payroll taxes, apply equally to alien Harvard grads and to those from the visa mills.

The visa mills' main educational offerings are master's-level courses; at that level, the CPT job subsidies are immediately available upon enrollment and these institutions often advertise "First Day CPT", as shown here and here.

For more on the OPT program, see this posting by my CIS colleague John Miano: "A History of the 'Optional Practical Training' Guestworker Program". By the way, there is no training involved; it is simply a subsidized foreign worker program, which is depriving the trust funds of about $2 billion a year.

As to the utility or non-utility of various government organizations on the topic of visa mills and OPT, the following table may be helpful.

What Secretary DeVos Can Do. There will be a May meeting, called by the U.S. Department of Education, to consider whether to revive ACICS as a departmentally recognized accreditation agency.

ACICS had in the past accredited a number of marginal educational institutions, allowing them to use federal funds for what many regard as education of dubious value. Most of these schools dealt with low-income Americans seeking career-enhancing skills; only a minority of them were of the visa mill type, providing low-quality education and solid subsidy programs (via CPT and OPT) described above.

Were ACICS again to be recognized by the Department of Education, marginal schools relying on federal aid programs (such as Pell Grants) would be able to stay in operation; were the non-recognition order to stay in place, many of these places would have to close.

The situation with the visa mills is similar but not identical. While the easy-going Department of Homeland Security will accept a non-accredited school for foreign student purposes, many states will not. Homeland Security does not require accreditation, but it does demand a state license. Schools like the University of Northern Virginia, which did not secure accreditation, lost their state licenses and had to close for that reason.

Many of the schools that formerly only had ACICS accreditation have either decided to go out of business or have secured new accreditors. Only a small number of highly questionable outfits are in danger of closing and just about their only hope is that the Department of Education will reverse its course on ACICS.

Secretary DeVos can preserve the status quo by refusing to revive ACICS. That decision would open up tens of thousands of jobs for Americans, restore multi-millions to the trust funds, and maintain the tradition of high-quality education for all.