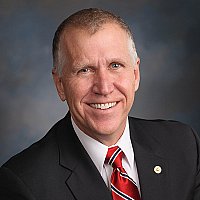 The biggest frustration ordinary Americans have with Congress in general is Congress' warped sense of priorities. When it comes to immigration policy, Congress puts special interests first and Americans citizens last. Just ask the former American computer programmers at Disney.

If North Carolina had members of Congress who were working for American citizens, those members' highest immigration priority would be to put an end to replacing North Carolinians with foreign workers.

Nonetheless, Friday morning's news provided a good example of why the public is fed up with Congress over immigration. The Drudge Report had a banner headline reading, "CONGRESS TO SAVE DREAMERS?"

Clicking on the headline brings the reader to a McClatchy article with this lead paragraph:

Conservative lawmakers led by Thom Tillis are crafting a bill they call the conservative Dream Act that would provide a path to permanent residency to people brought here illegally as children, offering President Donald Trump an escape hatch on one of his most vexing immigration challenges.

That is all fine and dandy but why is crafting a bill to grant permanent residency a higher priority than putting an end to replacing Americans with foreign workers for Tillis?

Maybe Tillis will consider incorporating a provision in his bill that unequivocally bans replacing Americans with foreign workers.