Chuck and Nancy Won't Be Pleased 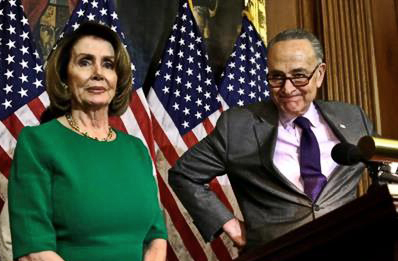 The White House on Sunday evening released its immigration principles that "outline reforms that must be included as part of any legislation addressing the status of Deferred Action for Childhood Arrivals (DACA) recipients," as the cover letter to Senator Schumer puts it.

The list includes many of the items long advocated by restrictionists: Fund the border wall, end asylum abuse, stop sanctuary cities, require E-Verify, end chain migration and the visa lottery, and more. Josh Gerstein from Politico may be right that the immigration wish list is like a presidential budget, in that Congress won't necessarily be guided by it, but I suspect it's more significant than that.

First of all, this list, even if just theoretical, is better than anything ¡Jeb! or Rubio or even Cruz would have come up with. And if you're going to negotiate, you don't start by offering a proposal that's preemptively watered down.

What's more, while Trump won't necessarily consider himself bound by this (any more than he's bound by anything else he says on any other subject), it makes it less likely Congress would send him, or he'd sign, a naked DACA amnesty, maybe with some fig-leaf border security provisions. (Drones!). Having raised the bar like this, signing a DACA bill that doesn't include some significant portion of what's outlined would be a Neville Chamberlain-level failure of deal-making, and would have political consequences.

The Democrats have, of course, denounced the White House "anti-immigrant wishlist" as dead on arrival. They'd say that even if they were serious about compromise, because that's the way the game is played. But they're not serious.

Chuck Schumer is a cunning and sophisticated political broker who'd be happy to agree to some meaningless border security theater (drones!) in exchange for a DACA amnesty – but the progressive base won't stand for it. Last month anti-borders radicals shouted down Nancy Pelosi, screaming "We are not a bargaining chip!" and "All of us or none of us!" The anti-borders activists are demanding a "clean DREAM Act" (which would be many times larger than a simple DACA fix) without even the flaccid provisions in the "No Wall McCaul" border bill.

In that environment, the Dems are in no position to bargain for real, even if they wanted to. Since the Republican leadership is eager to surrender on DACA, and even the White House is probably willing to take something less than the full list they outlined Sunday, that means if there's no DACA fix passed by March (when DACA work permits start expiring at the rate of a few hundred a day), it will be the Democrats' intransigence that's the cause.