New Book Asks If the GOP Has a Future

Will the upcoming companion book on Democrats address mass immigration? 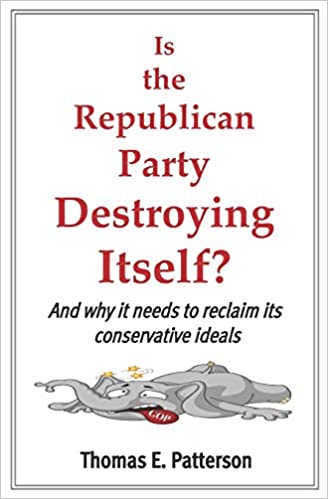 Fox & Friends was on full anarchy alert on Wednesday. In tones of alarm and dismay, its trio of hosts introduced clips of protesters burning an American flag in the streets of the nation's capital, protesters in New York demanding the removal of a statue of Theodore Roosevelt, and a black man in Atlanta armed with a shotgun as he declared the police were not allowed near the restaurant where a policeman shot and killed a black man. Then came stern proclamations of counter-alarm from two prominent Republican politicians, Sen. Tom Cotton of Oklahoma, who recently called for the military to restore order in the streets, and South Dakota Governor Kristi Noem, who said security measures had been fortified at Mount Rushmore. Then President Trump, warning in Arizona that the chaos in the streets was just a preview of what would happen if the Democrats win in November.

This positioning of Trump as Horatio at the Bridge is emerging as his best chance for November. The White House and Fox News are counting on Democrats to antagonize voters by failing to distance themselves from the anarchy and destruction that have tainted otherwise legitimate protests since last month's police killing of George Floyd in Minneapolis. Given the many woes of the Trump White House, this may be a longshot. But it is a coherent strategy for overcoming the predicament that is concisely presented in a new book with the provocative title: Is the Republican Party Destroying itself?.

The book's author, Thomas Patterson, is a clear-eyed son of a heavily Republican small town in Minnesota. He is a veteran and a former Army Special Forces officer in Vietnam, who is now a professor at Harvard's Kennedy School. Patterson energetically endorses the notion that our country needs a vigorous debate between those who represent conservative values and those who speak for progressive goals. But this book focuses on what he sees as the Republican descent from principled conservatism to the degraded status of the reactionary party of Trump.

Weighing in at a trim 152 pages, the book is remarkably concise and a very good read. It is more a lament at the decline of an important national institution than a jeremiad about Republican failings. Patterson issues a clear-eyed warning that the GOP is "racing headlong toward a demographic cliff". He warns of widespread public belief that Republicans are more concerned about taking care of the rich than they are about helping the working and middle classes. He says that if the GOP is to be politically viable, it must renounce the rigidly ideological obstructionism of recent years and reclaim the values of comity, restraint, and respect for democratic norms that it long defended.

Patterson writes that in his next book, to be titled Can the Democrats Govern?, he will take up the challenges facing the Democratic Party. I hope that book will examine Trump's march to victory in 2016 by doing the work that Democrats used to do — defending the interests of working Americans who in recent decades have suffered the downside of mass immigration, globalization, and automation. And I hope he will call on the Democrats to reclaim the values that once motivated them to call for limits on immigration and enforcement of laws that set those limits not only at the border but also at the workplace. I hope he will explore their gradual abdication of this role, especially during the administrations of Presidents Clinton and Obama and more recently, with the ascent of social justice warriors in the party. If the Democrats fail to recognize that urgent need, they may antagonize and frighten just enough voters to ensure their own defeat once again. The Dems, it seems, never miss an opportunity to miss an opportunity.