The voters in Barnstable County, Massachusetts have elected a new sheriff who says her “priority number one” is ending a public safety partnership with U.S. Immigration and Customs Enforcement (ICE). Sheriff-elect Donna Buckley explains on her campaign website that she will:

Move to end 287(g) because it does not make Barnstable safer. As Sheriff, I will always work towards the key goals of the office, to provide education, treatment and support to those in my care and custody so when they leave my care, they can be productive members of society. 287(g) does not add to those goals.

The 287(g) program allows local law enforcement to partner with ICE and receive training on how to identify criminal aliens in their jails and efficiently transfer them to federal custody for removal. Instead of handing criminal aliens over to ICE, however, Buckley wants to spend taxpayer dollars on educating and treating foreign nationals who have no authority to be in the United States — individuals who have already been arrested for perpetrating criminal activity on American society. 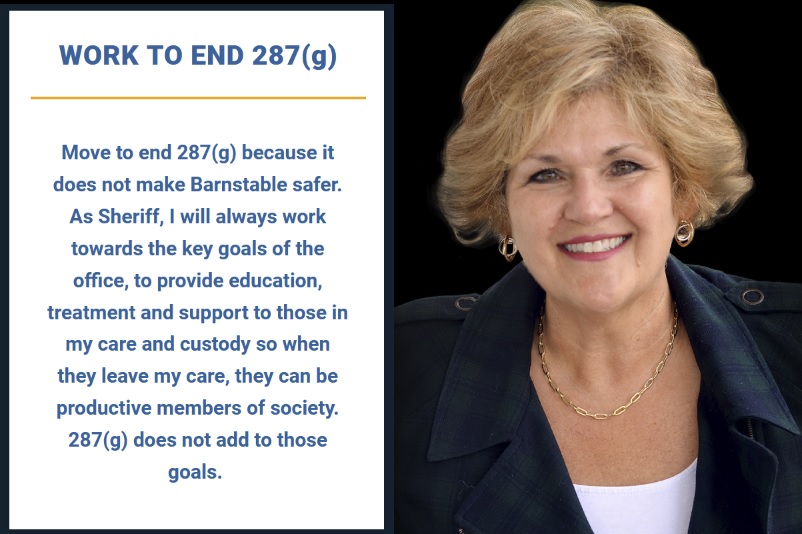 Buckley previously served as the general counsel for the Barnstable County Sheriff Office, so she certainly understands that rehabilitation is challenging and recidivism is unfortunately the norm. So why would she want to risk lives by releasing back into our nation an individual who could otherwise be handed off to ICE and returned to their home country in accordance with law? She will be needlessly endangering lives, but she doesn’t seem to care.

Buckley claims that 287(g) does not make Barnstable County safer, but she offers no evidence to support this assertion. Perhaps the statehouse should obtain the list of all criminal aliens identified through Barnstable’s 287(g) program over the past five years and ask Buckley to explain why she believes keeping these individuals in the county makes life better for lawfully-present residents. The data would show that the criminal aliens identified through the program are not the type of people most Americans want in their neighborhood.

For example, in January 2021, the Barnstable County Sheriff’s Office 287(g) Program encountered a citizen of El Salvador arrested for trafficking fentanyl — enough to potentially kill up to 50,000 people — and placed an immigration detainer on the subject. It turns out the person was an illegal alien who had been previously deported. Without the 287(g) program, Buckley will not be able to identify a similarly-situated individual as an illegal alien and will release fentanyl traffickers back onto the streets instead of assisting ICE with the removal.

As another example, in December 2019, the Barnstable County Sheriff’s Office 287(g) Program encountered a citizen of Brazil charged with drunk driving, negligent operation of motor vehicle, failure to stop for police, and unlicensed operation of a motor vehicle. It turns out the person was an illegal alien who had been previously deported. The sheriff’s office placed an immigration detainer on the subject so that ICE could take custody. Without the 287(g) program, Buckley will not be able to identify a similarly-situated individual as an illegal alien and will likely release the drunk driver back onto the streets instead of assisting ICE with the removal.