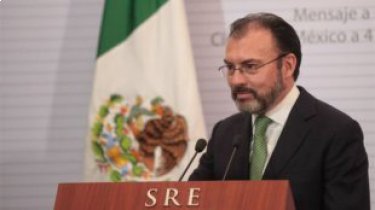 Mexico's Foreign Minister, Luis Videgaray, has been publicly touting what a benefit "Dreamers" will be to his country if they are not allowed to remain in the United States by means of a congressionally approved amnesty. He did so in the context of a NAFTA-related meeting in Mexico City between himself, Canadian Foreign Minister Chrystia Freeland, and U.S. Secretary of State Rex Tillerson.

Videgaray has done this before. The matter is important to Mexico because a significant proportion of those who constitute the "Dreamer" population — most of whom are or were recipients of the DACA (Deferred Action for Childhood Arrivals) benefits being ended under the Trump administration — are Mexican citizens. The Pew Research Center calculates that figure at close to 80 percent.

Unfortunately, Videgaray's statements carry a certain Tom Sawyer-hyping-the-picket-fence quality to them. He seems more interested in influencing American public opinion to believe that losing Dreamers would be such a bad thing for the United States that amnesty is the logical answer, rather than actually doing anything substantive to prepare for the possibility of a slow flow of these Mexican citizens back to their country of nationality.

I say "slow" because the reality is that, even if there is no amnesty and DACA benefits do in fact phase out over the course of two years, it is doubtful that federal immigration authorities will make any concerted effort to single them out for removal, although no doubt removals will occur as they are stumbled upon in the course of other enforcement programs such as worksite operations, or even through apprehensions as the result of crimes.

Where is the Mexican government's effort to back up Videgaray's words with action? Where is the all-hands-on-deck concerted public service campaign to announce that they will be welcomed back, and to assure them that they are valued citizens of Mexico? Logic would dictate that such a campaign would be undertaken by blanketing media outlets of all sorts in the United States where these Dreamers currently reside.

And where are the vigorous follow-on programs to ensure that they will be assimilated smoothly, and to show that concrete steps are being taken to take advantage of their skills and education in ways that benefit both the dreamers and Mexico at large? To the extent that they exist, they are still formative at best, even though this pot has been simmering for many, many months now. Mexico's had plenty of lead-time, but leaning forward in the saddle seems confined only to Videgaray's appearances at diplomatic forums.

One cannot help but wonder why, in fact, Mexico hasn't stepped up to seize the moment on the American and international stage to show what it can do with, and for, these Dreamers; to project the face of a "new Mexico" to the world. It's a huge opportunity missed.