The President's SOTU Address Highlights the Evil of Sanctuaries 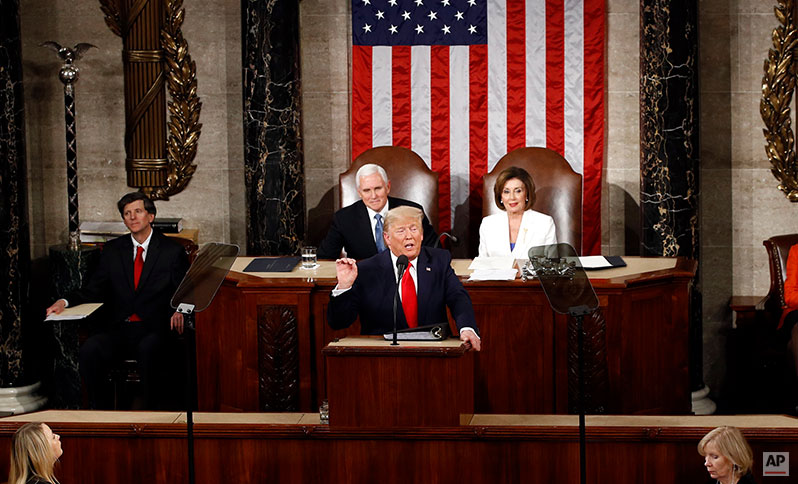 In his State of the Union (SOTU) address, President Trump devoted a significant portion of time to speaking about the harms inflicted on our nation's communities through misguided "sanctuary" laws and policies that shield alien criminals from apprehension by Immigration and Customs Enforcement (ICE).

It is ironic that the justification most often used is "community safety" by instilling trust in the immigrant community, because the real consequence has been that, in tens of thousands of cases, those alien criminals are released back to the streets only to reoffend — in some cases with tragically fatal results. One of the president's guests was the brother of a victim killed by such an alien.

During his remarks, the president endorsed a bill introduced by Sen. Thom Tillis (R-N.C.). Senate Bill 2059, the "Justice for Victims of Sanctuary Cities Act of 2019", would provide civil remedies for victims and survivors of crimes committed by alien criminals after release by state or local officers in defiance of detainers filed by ICE, or even by prohibiting or restricting provision of information requested by ICE to do its job in taking custody of an individual.

Sen. Tillis' bill is an excellent idea, but unlikely ever to become law as long as the Democrats hold a majority in either chamber of Congress or encumber the presidency, because that party has so closely allied itself to the mistaken notion that sanctuaries must be provided at any cost — including, often enough, the blood and suffering of innocent citizen and immigrant victims alike.

Filing a civil suit against a releasing law enforcement agency that precipitates such tragedies is a course of action we at the Center advocated using somewhat different predicates, which already exist in the law, after the shocking case involving the murder of Kate Steinle at the hands of a recidivist alien in San Francisco. Although Steinle's parents did, in fact, finally file a suit, it was (at least in my view) destined to fail, as it ultimately did, because of the manner and cause on which the complaint was based.

But the crux of the matter is this: Unless and until the Supreme Court of the United States (SCOTUS) takes the issues of sanctuary head-on, and rejects the feeble argument that sanctuaries are a permissible state action under the Tenth Amendment to the Constitution, even Tillis' bill will be of doubtful utility. This argument is the smokescreen frequently used by states and localities whose true aim is to impede and obstruct national immigration policies by substituting their own views and policies instead, even though immigration is a power reserved to the federal government by the Constitution.

SCOTUS will have the chance to do just that in the ongoing lawsuit filed by the Justice Department against California (a prime example of a sanctuary state) for its passage and enactment of the "California Values Act".

But the federal government should not stop there. It should learn the value of lawfare as practiced by open-borders extremists who have filed suits for every imaginable "wrong" they perceive in immigration law and policies, and simultaneously file suit against New York for its "Green-Light Law", and against New Jersey and other states whose laws or policies prevent honoring of detainers, forbid police cooperation with ICE agents, or prohibit exchange of information with immigration authorities, despite the existence of two federal laws that make such prohibitions illegal (see here and here).

In the meantime, ICE has finally stiffened its spine and begun to issue subpoenas to demand the information that sanctuaries withhold.

Equally (or perhaps even more) important, according to one media outlet, ICE is also demanding that sanctuary-oriented law enforcement agencies present judicially issued arrest warrants and transportation orders before it will render a wanted alien to that jurisdiction, in order to ensure that the alien is returned to them at the conclusion of the jurisdiction's criminal process, or if released on bond — something that did not happen in the Steinle case.