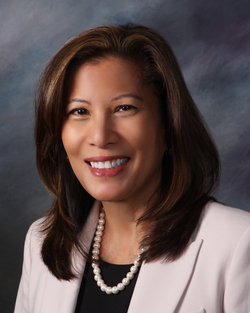 Tani Cantil-Sakauye, chief justice of California's Supreme Court, has once again taken to the bully pulpit to speak out against federal agents from Immigration and Customs Enforcement (ICE) who undertake arrests inside of California state courthouses, claiming that the practice is injurious to justice.

According to the Sacramento Bee:

Since President Donald Trump took office in January, people — those here legally and undocumented immigrants — are less likely to report crimes, to come forward as witnesses to crimes and to seek help if they are victims of crimes, Cantil-Sakauye said. That impedes public safety, infringes the constitutional rights of individuals and their access to justice and has led to a "tide of rising violence," she said.

Cantil-Sakauye went on to say that "This is a national concern ... that deserves more attention. We're seeing people not coming to court, not reporting to court, not coming for services [and] not coming to testify. ... [T]his has an effect not only on the immediate case and the safety of communities, but people who live in the communities." This isn't the first time that she has made such claims, as I noted in April.

The claims are preposterous and deliberately misleading. That's because the sub-population of aliens being "stalked" (as she has phrased it) consists of those who have been charged with criminal offenses against the state of California, and who in addition are subject to removal from the United States for being here illegally — often as the direct consequence of their criminal histories.

If aliens are failing to appear for court, it almost certainly isn't because they are simply victims or witnesses; in fact, the immigration laws of the United States provide a multiplicity of ways in which ICE and other federal immigration officers can assist such people, as well as police and prosecutors, by providing them with legal status in order to remain and to come forward and testify against perpetrators of crimes, whether those perpetrators are citizens or aliens.

It is high time that someone challenged Cantil-Sakauye to establish the empirical basis of her inflammatory language. What "rising tide of violence"? That of illegal aliens upon other illegal aliens, as often happens in immigrant communities, especially those within sanctuary jurisdictions where alien criminals are released back into those communities to wreak further havoc or seek revenge against those who have testified against them? How can ICE be blamed for that madness?

Dear Madame Chief Justice, show us the evidence to support your assertions regarding exactly who is "not coming to court [and] not reporting to court". It's a simple matter: Produce the detailed statistics. I'm laying heavy money on the odds that those who fall into that category are criminal defendants, not victims or witnesses.

So if judges are having to issue more bench warrants for alien defendants who fail to appear, you can blame a skewed and morally bankrupt system that chooses to elevate criminals to victimhood and grants them protections that are not, in fact, being given to the real victims — the people who live in communities where police don't cooperate with ICE and choose instead to release criminals back to the streets, contrary to their duty to "serve and protect". That is what has forced ICE agents into the courthouses to find the aliens perpetrating those crimes.