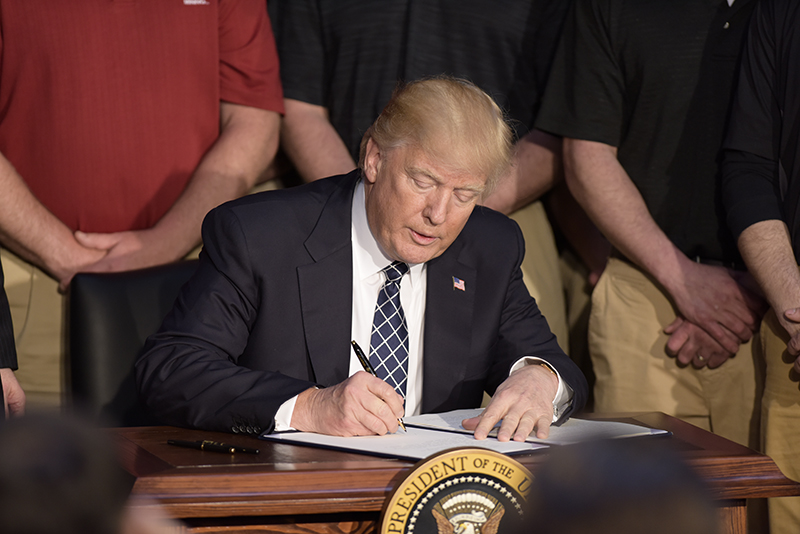 The president's recent tweet that he would be imposing a moratorium on immigration to the United States went viral in very short order. That's no surprise, given what a hot-button issue immigration has become.

Most people quite reasonably assumed he meant either a total, or near-total, suspension. Needless to say, though, the devil is in the details, and after enough of a pause for his remarks to gain steam — both among the usual cast of characters who are his constant adversaries and potential allies — it turns out that the executive order is decidedly different than one might reasonably have expected based on his initial comments.

That's because when the president tweeted, this executive order wasn't quite soup yet; it apparently morphed as various special interest groups reacted to it. For example, a host of industries that rely heavily on so-called "temporary" guestworkers (who are often enough here for years, sometimes decades) engaged in a flurry of calls to the White House to express their displeasure. As a consequence, since his tweet, the president clarified that what he meant was that he would be "suspending" entry of intended green card holders for 60 days so that his administration can see what happens to the nation's unemployment figures, after which, if necessary, he'll continue the suspension in order to ensure that Americans seeking to get back to work aren't obliged to compete with recently arrived foreigners. But even the 60-day moratorium on permanent arrivals isn't what it seems, since immediate relatives and refugees (among others) are exempted.

There are layers of irony in this, because functionally what it means is that individuals seeking permanent status based on their specialty skills or educational degrees are being blocked while the thousands of individuals forming extended families, and who use a substantial share of federal social safety net programs, will continue to arrive. In other words, at least among new arrivals (as opposed to those "adjusting" their status from within the U.S.), chain migration to the United States will continue while the skill-based portion of our immigrant visa system — something that the president has in the past endorsed in lieu of chain migration — is being canceled out, at least for the moment.

While I am no fan of extended chain migration, I will also admit, in my darker moments, that I suspect that a meritocracy-based immigrant visa system allegedly based on skills will, in fact, prove to be a mediocracy, in which graduates of second-rate universities in the developing world, many with questionable grades or degrees, will find their way into the United States. Fraud and corruption are all too commonplace to fully trust school transcripts and diplomas purporting to have been issued abroad. But I digress.

To return to the issue at hand, it seems to me that this is one of those fake-to-the-right, dart-to-the-left moments that pop out of the Trump White House at inopportune times, because while the superficial "atmospherics" are right, it's wrong on substance for at least two significant reasons.

While it's true that some portion of the family-oriented chain migration system will involve elderly parents or minor children who are not going to compete in the job market, all of those who are employment-aged (such as spouses of citizens and resident aliens) most certainly will be. In fact, one of the peculiarities of our immigration system is that many of those seeking green cards live and work in the United States while awaiting adjustment of status to permanent residence, which is the trigger for obtaining a green card. So they are already competing for jobs with Americans, because they're here and in the workforce or have been laid off and are waiting for the chance to reapply for work at the first opportunity. The executive order doesn't change that. These aliens can't and won't be expelled or lose their employment eligibility — nor could they without due process as it's currently understood to apply in such cases. Thus the executive order doesn't eliminate them from the competition for jobs.

Worse, the president continues to cater to Big Business, Big Agriculture, Silicon Valley, and the many others who have become dependent on so-called "temporary" visa holders who are here in the millions, and who will continue to arrive in the hundreds of thousands when all of the various programs are tallied together. The president has exempted them from his suspension, apparently based on special-interest pressure. These are the self-same mega-corporations and industries that have formed alliances with open borders-advocates to keep up the drumbeat for unrestrained immigration, as well as amnesty for illegal aliens, one example being fwd.us, Mark Zuckerberg's lobbying group. Massive guestworker programs are the real obstacle to achieving full employment of American citizens and people who are already green card holders.

Another apparent last-minute concession to special interests in the final form of the executive order was to also exempt from suspension those who buy their way into the United States as green card holders via the EB-5 investor visa program — which is used by substantial numbers of citizens of the People's Republic of China. Incredibly, under existing rules laid out by a federal judge in the District of Columbia, these so-called "investors" don't even need to pony up their own cash; they can borrow it. Worse, the EB-5 program has been rife with fraud and corruption for a very long time and ought properly to be allowed to sunset entirely, not given special treatment by executive order.

This executive order requires a willing suspension of disbelief on the part of the public in order to accept the narrative fiction that it will do anything substantive at all to ease the unemployment burden being faced by the 22 million-plus American workers now out of jobs and desperate to regain their lives and livelihoods. I find it impossible to believe in light of the obvious catering to powerful big-business and agriculture lobbyists worried more about their own bottom lines than the plight of America's unemployed.