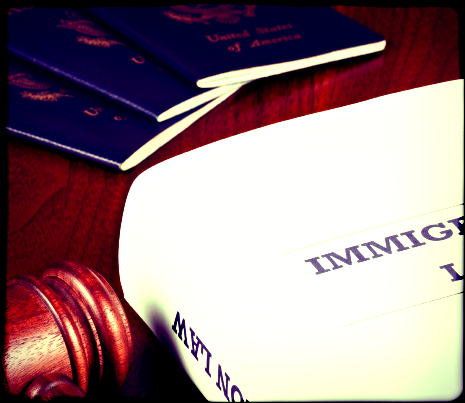 Sapna Rampersaud has written an article for National Review Online's The Corner titled "Illegal Immigrants Can Now Defend the Laws They Break", detailing how the states of New York and California have moved to permit illegal aliens to practice law. This is the kind of thing one might expect to see as a headline on the satirical website The Onion, but, sadly, it's true.

Actually, they've been headed that way for some time. John Feere, previously a legal policy analyst here at the Center, wrote about California's efforts clear back in January of 2014, and commented on the back flips achieved by the California Supreme Court in deciding that permitting illegal aliens to practice law was copacetic:

[N]ew lawyers must take an oath to "support the Constitution of the United States" and must also pass an ethics exam. The California Supreme Court explained in its holding that it "assumes" that a licensed illegal alien "will make all necessary inquiries and take appropriate steps to comply with applicable legal restrictions." The Committee of Bar Examiners explained that "there is no reason to believe" Garcia [the illegal alien applicant seeking approval to practice law] "cannot take the oath and faithfully uphold his duties as an attorney."

It is unclear why the court and the bar examiners would assume such things. Illegal immigrants regularly fail to comply with a whole host of laws. Within Garcia's own circle of family and friends one can identify a variety of potential legal violations, if media reports are accurate.

Garcia admits to working a number of jobs prior to law school, and depending on how he obtained the work, he may be liable under False Personation of a U.S. Citizen (18 U.S.C. § 911), Fraud and False Statements (18 U.S.C. § 1001), and Social Security Fraud (42 U.S.C. § 408), just to name a few examples. We estimate that nearly half of working illegal aliens have filled out I-9 Forms and are likely in violation of these statutes. If the Obama administration decided to enforce federal immigration law, Garcia could potentially face many years in jail and significant fines. It is important to remember that these crimes often create real victims.

In addition to Feere's very cogent observations, I'm also wondering how, exactly, an attorney who is illegally in the United States can be deemed an "officer of the court". Aren't the two things, when put together, inherently oxymoronic? An alien who has no lawful status must inevitably engage in deception and subterfuge in order to remain in the United States without being apprehended. That doesn't sound like the kind of upright behavior required of officers of the court.

Moving back to the article on The Corner, Rampersaud has her own version of the "Mr. Garcia" described above:

One such lawyer is Lizbeth Mateo. Born in Mexico, Mateo and her family illegally crossed the border when she was 14 and have been residing in California ever since. In 2013, Mateo returned to Mexico knowing she had no legal visa to come back and, as part of what became known as the Bring Them Home Campaign, returned to the U.S. border with eight other children and demanded unauthorized reentry into the U.S. — which she was granted. Having graduated from Santa Clara University School of Law and working jobs that required the use of a stolen Social Security number, Mateo now spends her time as an immigration lawyer "preparing legal strategies to help undocumented immigrants stay in the country" — all while flaunting her own undocumented status.

As Rampersaud goes on to remark:

This example illustrates the extent to which certain states both accept and encourage illegal immigration. Mateo is praised for being a "leader" and a "bold advocate" but should instead be described as what she is: a lawbreaker. Mateo has taken an oath of office to uphold the Constitution, but breaks federal law every day. Square that circle.

She's right. You can't square that circle. But one thing I can say for certain is this: It takes more than just a state license to practice immigration law because, of course, immigration laws are federal in nature. Attorneys who wish to represent aliens before the Executive Office for Immigration Review (EOIR), the Justice Department division that handles the immigration courts and Board of Immigration Appeals, must register with and be approved by the EOIR director.

While I don't see any particular prohibition of illegal aliens in the provision of the federal regulations governing such registration, at 8 CFR Section 1292.1, it would defy logic and make a mockery of the immigration courts for the director to approve such an application for registration.

There is also the issue of fairness to the illegal alien being represented by another illegal alien: What happens if his lawyer is arrested before his hearing is completed, thus leaving him high and dry? For EOIR to permit such a situation to occur would be tantamount to malfeasance. On the other hand, it defies logic that certain states have already taken that step-too-far, and that, too, seems to me to smack of malfeasance.

Maybe it's time that Attorney General Jeff Sessions steps in to require his new EOIR director to amend the regulation and make the prohibition against illegal alien lawyers representing other illegal aliens in the immigration courts crystal clear.

Meantime, if an illegal alien attorney shows up in court to represent an alien respondent in removal proceedings, perhaps the presiding immigration judge will have the good sense to summon immigration agents to arrest the attorney and place him or her into proceedings as well. After all, they're fair game. Being a lawyer shouldn't intrinsically place anyone above the law, should it?