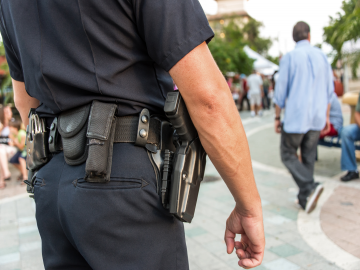 For many years of my life, my daily routine included strapping on a gun and handcuffs before going to work. I was a plainclothes investigator for the Immigration and Naturalization Service (INS), having begun my career in the mid-1970s. By the time I started working for INS, it was a Justice Department agency, having before that been a part of the Treasury and Labor Departments.

There's nothing particularly remarkable about that daily regimen; it's no different from what thousands of other law enforcement agents do every morning. What makes it remarkable is this: I had no statutory authority to carry that gun. Neither did any of the hundreds of other officers of the INS, which consisted of immigrant inspectors, deportation officers, detention officers, immigration examiners, and Border Patrol agents.

I don't recall precisely when the statutory right to carry firearms was embedded in law; sometime in the late 1980s or early 1990s, I think, but during all those many decades before that, INS officers were issued weapons and bullets and other necessary paraphernalia, qualified with them quarterly, and did all of the things officers of other agencies did, without any law specifically authorizing them to carry a gun.

We were taught from day one of basic training that our authority to bear arms was an implied power. As the theory went, because we had legal authority to take and consider evidence, interrogate, administer oaths, take testimony, and, most especially, arrest with or without warrant, it followed that we clearly had the right to protect ourselves, our fellow officers, or innocent third parties in the conduct of these sometimes dangerous duties.

While officers were sometimes disciplined for inappropriate use of a weapon, I know of no successful challenge ever to our right to carry the weapons or to use them within the confines of prevailing law and policy regarding use of deadly force, despite the lack of a statute.

Any attempt by a local jurisdiction or a private party to initiate a lawsuit or criminal action in state court based simply on us carrying weapons would have failed, because the matter would have been removed to federal court under the Federal Rules of Civil or Criminal Procedure, as appropriate, based on the argument of federal supremacy and the fact that immigration enforcement was (and is) a unique exercise of federal authority. The carrying of weapons for defense of self and others was an implied power that was vigorously defended by the INS, the Justice Department, and the federal government at large, including the judiciary. No one questioned the need or the cogency of the implied-power argument.

Another tool available to me, very different from the tool of weaponry, but a tool nonetheless, was the use of immigration "holds" or, more properly, immigration detainers. The concept was simple: When I became aware of an alien in the custody of another police agency, an alien who I knew to be in the United States in violation of law, often one who was a criminal, and/or who had returned to the United States after having been deported, I filed the detainer with the agency.

Like carrying firearms, it was an exercise in implied power arising from our plenary authority as immigration officers, the logic going something like this: "You have in your custody an alien who is in violation of the immigration laws. I'm a federal officer. When you're done, I want him so I can do what I'm legally charged with doing." I don't recall anyone ever balking at the filing of a hold because, at least back then, it seemed pretty self-evident. And had someone attempted to impede the assumption of custody, just like with firearms, the U.S. Attorney's Office would have filed a motion to have the case heard in federal court.

Back then, this would have happened even if, perhaps particularly if, the legal action had been filed against the police or sheriff's department because it would have been understood that both filing and honoring of the detainer were at heart an exercise of, and response to, a matter under unique authority of the federal government, and that no challenge could be allowed that would undermine that authority.

Ironically, when Congress finally enacted a provision having anything to do with detainers (again, in the 1990s), it was to require INS to file detainers against narcotics violators when requested to do so by other agencies. The provision was inserted into law at the insistence of state and local law enforcement, who believed INS wasn't doing enough to get rid of alien drug offenders.

Such a holistic view of federal immigration enforcement no longer pertains; it has been broken into shards with lawsuits against state and local authorities in which the federal government, at least during the eight years of the Obama administration, refused to intervene, even knowing as they must have that such a refusal would result in further undermining of the ability to enforce the nation's immigration laws.

What's more, the stubborn resistance to any kind of cooperation with federal efforts at maintaining control over unlawful immigration has reached such a peak that many of the state and local entities have become "sanctuaries" in which they do everything possible to frustrate immigration agents' attempts to take custody of criminals in the most logical, and safe, place possible: in the confines of a police, jail, or correctional establishment. Instead, such criminals are returned to the streets, where they all too frequently commit heinous acts against the very members of the community that state and local police claim they are there to "protect and serve".

The federal government doesn't, and cannot, operate in a vacuum. Is it unreasonable to ask police and correctional officials to hold alien criminals they have in their custody long enough for immigration agents to respond and arrest them, given that there are hundreds of thousands of federal, state, and local law enforcement and correctional officers serving in thousands of organizations, but only about 1,300 immigration agents for the entire country?

Some also hide behind the shield of the anti-commandeering provisions of the Tenth Amendment, claiming that it is abusive and unconstitutional to expect them to expend resources in aiding federal immigration agents. That rings palpably false on so many levels. To mention just a few:

As I said, their arguments ring false; they are a facade to mask the fact that many state and local governments wish to create a de facto patchwork quilt of jurisdictions were immigration laws will be enforced in the way they think appropriate, rather than the manner mandated by Congress through its lawmaking powers.

I know that times change, but they don't always change for the better. We are beset by litigious destructionists, small-minded thinkers, and horse-blindered jurists who gnaw like rats at our social cohesion.

When I look around me and see the assaults on our sovereignty — from within as well as from the outside — I cannot help but wonder if the fabric of our federal republic isn't being frayed; deliberately pulled apart, in fact, one thread at a time.