Can Amnestied Aliens Who Naturalize Be Denied the Right to Petition for Their Parents?

What would that mean for the future of our borders and the growth of smuggling cartels? 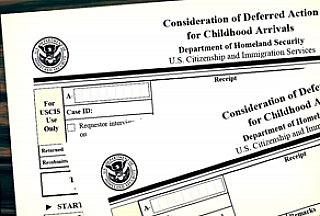 The Congressional Research Service (CRS) was recently asked whether it would it violate equal protection to prohibit naturalized "Dreamers" from sponsoring their parents for immigrant visas.

It is an important question because, if one accepts the oft-repeated rationale behind granting "Dreamers" amnesty ("here through no fault of their own; it was their parents who had them smuggled"), then why in the world should the parents be rewarded for this misconduct by having petitions filed for them?

After all, they put their children at great risk by entrusting them to professional smugglers, many of whom are criminal cartel members notorious for physically, emotionally, or sexually abusing those put into their hands. The parents also, in a very real sense, used the children as both shield and spear to avoid their own removals, hoping that at some point they might ride their way to amnesty on the backs of their offspring.

On February 12, CRS issued a Legal Sidebar responding to the question posed, which forms the title of the paper, "Would it violate equal protection to prohibit naturalized 'Dreamers' from sponsoring their parents for immigrant visas?" The analysis is less than reassuring:

This policy debate about Dreamers' parents has given rise to a fundamental legal question: does Congress have the constitutional authority to craft a pathway to citizenship for Dreamers that includes unique restrictions on family sponsorship? Suppose, for instance, that Congress enacts a statute that (i) grants Dreamers a pathway to citizenship, but (ii) restricts Dreamers' ability, after they naturalize, to sponsor their parents for immigrant visas. Would this parent-sponsorship restriction violate naturalized Dreamers' constitutional right to equal protection of the laws by drawing a line between them and other similarly situated U.S. citizens? ... It's too early to answer that question definitively. [Emphasis added.]

When President Trump announced a phase-out of the Deferred Action for Childhood Arrivals (DACA) program, which was created as an administrative amnesty for "Dreamers", he made clear that he wanted Congress to act on the plight of DACA beneficiaries because, although he believed that the prior administration violated the Constitution's separation of powers when it instituted DACA, he felt sympathy for the plight of "Dreamers", and wanted a legal framework that could protect them.

To achieve this, he outlined a reform policy of four pillars: amnesty for 1.8 million illegal aliens in exchange for changes to border security and legal immigration programs. It was a generous offer: There are only about 700,000 DACA beneficiaries, so the administration was willing to legalize well over twice that number to achieve its other goals.

Senate Majority Leader McConnell set aside a week in February for legislative deliberations on "Dreamers", but the effort foundered because of deep divisions between those who agreed with the president, and those who didn't (a small number of Republicans and virtually all Democrats). But the debate continues in both the Senate and House, where various proposals keep popping up.

Among the key unresolved questions are those having to do with chain migration, especially as it relates to amnestied aliens' ability to petition for their parents at some future time. Some of the legislative proposals recognize the impropriety of providing parents their own path to legal status and include specific provisions that would prohibit the legalized children, whether as resident aliens or citizens, from petitioning for their parents to remain in a lawful status. But CRS has now left us with doubts as to whether such a provision would pass constitutional muster.

Considered dispassionately, the CRS analysis puts Congress into a trap with no way out:

Given the importance of this issue, we are left once again asking precisely what legitimate policy goals are achieved by granting amnesty to this group of aliens, particularly if the unintended consequence is to open the floodgates for future waves of parents and children?

It's worth noting that in the lead-up to congressional debate, expectations on the part of aliens south of our border appear to have been extremely high: About half of all illegal crossers this last federal fiscal year consisted of partial family units and minors.

Many "Dreamers" present superficially sympathetic figures, although as a group they are not quite as achievement-oriented as the poster children often held up to public view for P.R. purposes. And there are also clearly some disturbing outliers, such as the young woman who recently threatened a school shooting in New York, just after the Parkland, Fla., high school massacre, as well as DACA beneficiaries who have been linked with MS-13 and other gangs that trade in violence at a horrific level (see here and here).

For now, the "Dreamer" pot is only simmering, at least until the federal Ninth Circuit Court of Appeals weighs in on the government's bid to end a district court-ordered injunction against ending DACA — or the Supreme Court after that, if the Ninth Circuit sustains the district court judge, whose opinion containing the injunction represents the epitome of judicial activism.

But sooner or later, the pot will again begin to boil. One might even suspect that those in Congress who most want amnesty with no strings attached will try to heat that pot up sooner rather than later, as both chambers once again are forced to consider a 2018 federal budget in March, six months into the fiscal year, even though that would be a phony kind of pressure whose only purpose is to force so-called immigration "hard liners" to give up their goals in favor of an "olly-olly-in-come-free" kind of amnesty unfettered by enforcement measures, or an end to diversity visas or changes to chain migration.

Members of Congress would do well to think carefully about the wisdom of what they do, and when they do it. They must consider carefully the ramifications, because it is a certainty that the law of unintended consequences will be fully in play if they aren't cautious.

The CRS Legal Sidebar should be a wake-up call to those who have the best interests of the nation at heart. Sympathy alone is sometimes an inadequate foundation upon which a nation should base its laws and systems — particularly where the thorny issue of immigration is concerned — because the inevitable consequence will be years and years of many tens of thousands more families and minors entrusted to criminal gangs, thugs, and predators on both sides of the border, sometimes with catastrophic consequences (see here and here). Is this really what we want as a nation?