Those rejected for Mexican asylum get new stories to help with their appeals, allowing them to continue north to the U.S.

Part 3 of a report from southern Mexico.

TAPACHULA, MEXICO – United Nations-funded immigrant service nonprofits in southern Mexico are offering an unusual and controversial psychological therapy to enable migrants to continue on the trail north to the U.S. border. 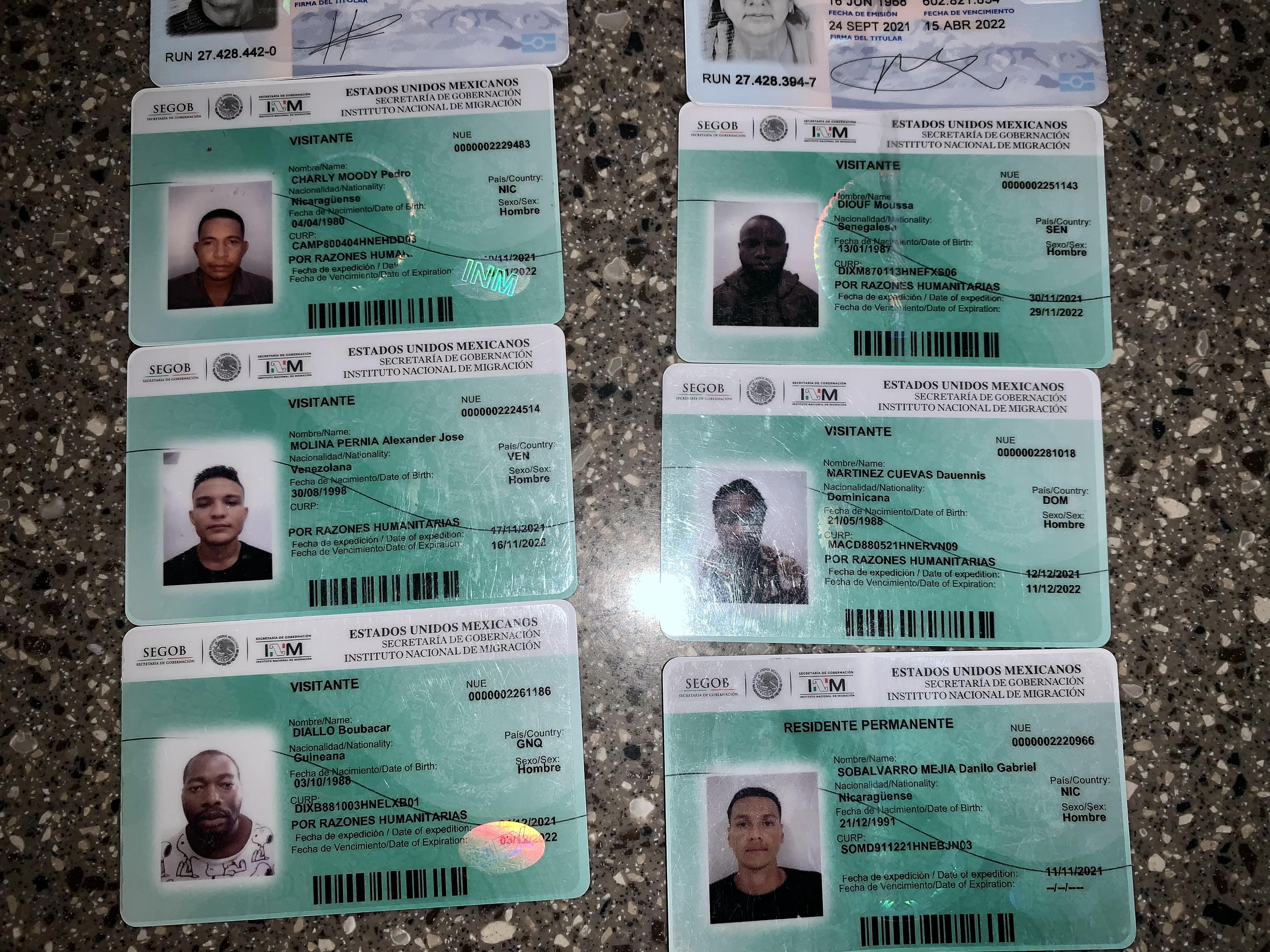 Mexican residency cards found on the banks of the Rio Grande, discarded by non-Mexican migrants before they illegal crossed the U.S. border. Photo by Todd Bensman.

At least two UN-funded nonprofits with operations in the southern border states of Chiapas and Tabasco pay stables of clinical psychologists to help migrants recover “repressed memories” of government persecution and other hardship stories that qualify migrants for Mexican asylum and a residence card, allowing an eventual trip over the U.S. southern border. Thousands apparently have gone the recovered memory route after they were rejected for asylum because they told Mexican immigration authorities they just wanted to go to the United States to make money – an ineligible claim, unlike official government persecution.

With their newfound memories of more eligible claims, the immigrants get asylum (a term many use interchangeably with refugee status) and Mexican residency cards, which many then promptly use to pass through Mexico and make illegal entry over the American border.

“The most common mistake migrants make during interviews . . . is that they are saying that they are suffering economic hardship. It’s not one of the criteria for refugee status,” Vidal explained during a lengthy recorded telephone interview January 20 with the Center for Immigration Studies in Tapachula. (Read extensive excerpts from the recorded interview here.) “That may cover up one of the true reasons why they are coming. They need psychological help so they can remember the situation they experienced.”

Asked if recovering asylum-qualifying memories for better interview outcomes is the main purpose of employing psychologists with United Nations money, Vidal answered: “Yes, through the psychological help we give them.”

Most immigrants in Tapachula highly value Mexican refugee or asylum status (terms often used interchangeably in Mexico) because it qualifies them for residency cards that allow travel out of the southern border states. The government has endeavored to keep them bottled up in the southern states at the behest of the Biden administration, which hopes to lower record-breaking, and politically damaging, border apprehension numbers. With the residency cards, many holders make a beeline straight to the U.S. southern border and throw them away. (See accompanying photo.)

That UN-funded nonprofits draw on the controversial method in Mexican immigration processes that often end with immigrant beneficiaries traveling over the American southern border begs for greater public awareness, debate, and investigation as to its validity. Decades of controversy have dogged so-called “recovered memory therapy” in the United States, with some in academia concluding that it amounts to debunked science that too often implanted false memories. Some still believe it has value.

A 90 percent Approval Rate. According to Vidal, use of recovered memories during the interview with Mexican immigration adjudicators has produced a 90 percent approval rate.

“That’s the most important part of the process. That’s when the Mexican authorities listen to the motives of why they left their country. And those motives have to be according to international conventions,” Vidal said.

A potential issue is the appearance of coaching by both lawyers and psychologists to achieve the desired outcomes.

Vidal said his organization helps not only to unearth repressed memories of persecution for use in an appeal after a migrant is denied asylum or refugee status; the lawyers hold classes to make sure immigrants understand the asylum-winning requirements before they interview. Lawyers from around the world sometimes come to teach the classes, including from the United States, he said.

The trainers make sure their migrant students understand which testimonies to emphasize and which to not emphasize, Vidal explained.

“For example, if they have an economic need, that’s not necessarily one of the requirements. However, once we do our interview with them we find out they did suffer some type of violence or persecution or anything that qualifies as refugees, we tell them to emphasize those.”

Vidal did not have a detailed breakdown on how many immigrants his group helped to remember what Mexican immigration interviewers need to hear for a YES-box check. But he said his group’s lawyers and psychologists got 3,000 immigrants approved as refugees in 2019 and provided classroom training that year for 19,000 more.

How Widespread? Fray Mattias del Cordoba is not the only non-profit taking United Nations money to help immigrants recover memories that enable them to get to the United States border.

Another organization perhaps a half mile away in Tapachula called Servicio Jesuita a Refugiados also advertises that it provides “legal and psychological” services to immigrants trying to move out of Mexico’s southern provinces. Its website and a brochure say the United Nations funds the organization. The brochure prominently features the insignia of the UN High Commissioner for Refugees (UNHCR, or ACNUR in Spanish). Its director could not be reached, but an employee at the door said the agency helps rejected asylum seekers with their appeals.

Vidal said the Jesuits maintain at least one facility providing the services in next door Tabasco state, which also sees high migrant traffic coming in from Guatemala.

On a recent visit to the Jesuit facility in Tapachula, CIS asked a Honduran mother why she was waiting in a line with a young child at the front door. A worker was arranging for appointments at the door with a security guard, some dozen migrants waiting their turn in a line outside.

Unethical Coaching? All of this raises obvious questions. For instance, if these trainings and memory recovery methods were more widely known, would they not give rise to perceptions that the UN-funded nonprofit organizations are operating unethical coaching and asylum fraud mills that enable tens of thousands of migrants make it to the U.S. southern border?

Asked how he would respond to an allegation like that about his non-profit, Vidal pointed to the high Mexican acceptance rate as the only evidence he needed that the memories his counselors were helping migrants recover are real.

“If the majority of people were lying, we wouldn’t be successful. The Mexican authorities would not recognize them as refugees,” he said. “If we have a high percentage of success, it’s because we have truth. With migrants, it’s harder to lie. The authorities would find out about it.”

He acknowledged, however, that Mexican immigration adjudicators conduct no verification investigations of the stories.

In recent months, some border hawks and Republican members of Congress have strongly criticized the United Nations in Latin America for providing cash debit cards and other forms of assistance that they believe helps fuel the migration crisis. A dozen Republican lawmakers have signed on to a proposed bill to defund the United Nations over activities they regard as aiding and abetting illegal immigration.

CIS asked a United Nations spokesperson to comment on those programs and criticisms. In an emailed response, Silvia Garduno demurred.

“UNHCR is a politically neutral, strictly humanitarian organization,” she wrote. “We are always ready to discuss our work around the world with anyone interested. UNHCR respects the U.S. legislative process and does not comment on specific legislation related to allocation of government funds and resources."

However, elsewhere in her response, Garduno referenced the international agency’s work with Mexico’s asylum system.

“UNHCR’s work in Mexico centers on helping the Mexican government improve its national asylum system,” she wrote, in part. The agency’s Mexico operation along the Guatemala border “works to ensure refugees in Mexico know their rights and have the opportunity to seek asylum in Mexico.” The agency provides information “on the right to seek asylum and assists individuals while their applications are in process.”