Part 2 of a report from southern Mexico. 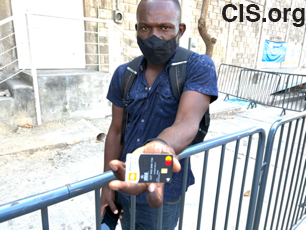 Luis Ponce of Haiti outside the United Nations facility in Tapachula, Mexico, to complain the agency had not made his January debit card deposit. Photo by Todd Bensman.

TAPACHULA, Mexico — The United Nations refugee agency (UNHCR), which receives billions in U.S. taxpayer money, is handing out cash debit cards and other funds for lodging and prescription medicines to U.S.-bound migrants who spill out into this southern Mexican city by the hundreds of thousands.

Every day, word of the UN’s cash assistance draws long lines of hopeful U.S.-bound migrants to a large, grey building staffed by application-takers and interviewers who determine who gets the money.

Haitian Luis Ponce was in line one recent day, not to get his application going, but to complain to the officials inside that the UN is in arrears. The international agency had not recharged his debit card-linked local bank account, a yellow and gray plastic affair with a UNHCR/ACNUR insignia in the upper third left corner, with the 3,600 pesos owed (about $180).

And, as the Center for Immigration Studies has previously reported after first seeing the cash cards distributed at a Reynosa, Mexico, migrant camp, the United Nations is sharply escalating the amounts of cash and other direct financial assistance to immigrants all along the migrant trail from Panama to Texas, at an uncharted series of some 100 waystations like this one in Tapachula. It is part of a program the United Nations calls “cash-based interventions” (CBI). UN documents say the program is meant to “restore feelings of choice and empowerment to beneficiaries”, a part of which may well mean that migrants are able to keep moving north rather than returning home.

Not much has been publicly reported about CBI, such as the extent to which it is used. But I have reported that families can receive hundreds of dollars a month for “unrestricted ... unconditional” use in local country areas depending on where they are on the trail (in the northern Mexican town of Reynosa, families were getting $400 every 15 days). One UN document said the money can be handed out in envelopes and transferred to bank accounts for lodging assistance and even for transportation costs to move with migrant concentrations. The United Nations began ramping up CBI in 2019, spending $60 million on 29,000 migrants in Latin America, and then doubling the outlays in 2020, with plans to vastly increase its use in the Americas during 2022 and beyond.

Growing American Knowledge — and Rising Resentment. But as word of this under-reported UN cash assistance program has spread, it has given rise to gathering outrage among some Americans, including a growing group of Republican members of Congress. They see the aid as U.S.-taxpayer-funded material support for illegal immigration over the southern border that has helped fuel the greatest mass-migration event in U.S. history, which is ongoing.

One outgrowth of the congressional outrage is the recently introduced No Tax Dollars for the United Nations Immigration Invasion Act, sponsored by Texas Rep. Lance Gooden (R) and 11 other House Republican co-sponsors. It would prohibit the $3.8 billion in contributions currently proposed in the White House’s 2022 budget to UN-supported organizations.

“All of this sounds like they’re using U.S. tax dollars to encourage this invasion into the nation, and it seems strange to me that we would support an organization that encourages and funds this,” Gooden said in a recent interview. “It’s totally crazy. I am baffled that there’s not more outrage, but I think the lack of outrage is due to the lack of knowledge.”

Finally, the UN Speaks, Somewhat. To date, the United Nations has remained mum about any of this nascent public controversy. But in Tapachula, the agency’s local public information officer for Mexico, Silvia Garduno, agreed to answer some written questions about the program for the Center for Immigration Studies, but did not answer follow-up questions by publication time. What Garduno did say follows:

What does your agency do, exactly? How does it see its mission here in Tapachula, such an epicenter of migration?

Established in 1950, UNHCR, the UN Refugee Agency, is mandated by the United Nations to lead and coordinate international action for the worldwide protection of refugees and the resolution of their plight.

UNHCR’s work in Mexico centers on helping the Mexican government improve its national asylum system. This includes strengthening the government’s asylum process and capabilities, supporting authorities in identifying those individuals with bona fide protection needs among the wider migratory flows through the country, and ensuring those individuals promptly receive the humanitarian assistance they need. Our work in Tapachula, along one of the primary migratory routes, is guided by these objectives.

UNHCR first worked in Mexico in 1982, aiding thousands of Guatemalan refugees seeking international protection. Today, UNHCR Mexico has offices in different parts of the country that work to ensure refugees in Mexico know their rights and have the opportunity to seek asylum in Mexico, having been forced to flee their home countries. UNHCR works in collaboration with Mexican authorities, civil society organizations, and the private sector.

In Tapachula and in our offices along Mexico's southern border, UNHCR supports the authorities by providing individuals information on the right to seek asylum, and assists individuals while their asylum applications are in process by, for example, referring them to shelters operated by civil society, providing legal assistance, or providing humanitarian support for food and basic needs for the most vulnerable.

What are the rules to get the aid?

UNHCR works to support the Mexican government in understanding and addressing the needs and vulnerabilities of people seeking asylum in Mexico.

In Tapachula, this includes identifying people who have international protection needs, including those with particular vulnerabilities such as children at risk, single mothers, sexual- and gender-based violence survivors, and people with medical needs, among others. UNHCR refers these people to existing assistance programs, such as temporary shelters or legal assistance. Humanitarian cash assistance is available only to individuals with particular vulnerabilities who are seeking asylum in Mexico and who intend to remain in the Mexican state where they have applied for asylum until the process is completed. Strictly regulated, short-term cash assistance is a highly targeted humanitarian intervention for individuals who meet those criteria. It is provided to help ensure they can meet basic living expenses while their requests for asylum in Mexico are processed. This process may last three to four months.

In Mexico and anywhere else in the world, UNHCR assistance is based strictly on the humanitarian need of individuals in need of international protection. UNHCR communicates criteria to qualify for this aid through a wide range of channels to the general public, partner organizations, displaced people, and anyone else who requests it.

There's a caravan coming, supposedly. What would be your agency's response should they get this far? Is there a plan? How does this work?

UNHCR is monitoring the situation of small groups of people, mainly from Honduras and Nicaragua, that form part of the so-called caravan in Guatemala. As in many parts of the world, UNHCR, together with partners, helps identify people that have international protection needs because they are fleeing violence or persecution. We provide information on their right to seek asylum, referring them to relevant authorities as required, and humanitarian assistance to the most vulnerable. We do this in different parts of Central America and Mexico, including in Tapachula, regardless of whether people are traveling alone, as a family, or in groups.