A Remarkable Unverified Claim by the President of Guatemala: 100 Migrants Linked to Terrorism Arrested in That Country At a public conference attended by reporters and Vice President Mike Pence last week, Guatemala President Jimmy Morales made a striking claim based on what he said was classified intelligence.

The newspaper Prensa Libre quoted President Morales saying, during his turn at the lectern of a major regional security conference, that his administration had captured "close to 100 people completely linked to terrorist issues, with ISIS, and that not only have we arrested them within our territory, but they have been deported to their countries of origin."

The Guatemalan president was speaking October 11 during the second Conference for Prosperity and Security in Central America. Senior American officials were in attendance with the vice president, as was Honduran President Juan Orlando Hernandez, El Salvadoran Vice President Oscar Ortiz, Mexican Secretary of Foreign Affairs Luis Videgaray, and Mexican Secretary of Governance Alfonso Navarrete, among others.

No U.S. media reported the remarks; the Associated Press only reported Vice President Pence's speech, and the U.S. State Department posted the remarks of Secretary of State Michael R. Pompeo. As far as is known, no U.S. official has commented on President Morales' remarkable claim of apprehending so many terrorist migrants.

Healthy skepticism is warranted here. (Guatemala happens to have requested $15 billion in border security assistance, and President Morales is laboring under accusations of corruption).

But the government of Guatemala apparently is standing by the claim, one that would carry significant implications to U.S. border security and immigration policy were it to vet out as even partly true.

Reporters for Prensa Libre appear to have pressed the issue. The paper followed up with Guatemala's chief communications officer, Alfredo Brito, who said the president disclosed the "achievement 'because it is a work in coordination with the different intelligence and security agencies.'" Later, the paper was able to report reaffirmation of the president's claim from the country's Secretary of Strategic Intelligence Mario Duarte that the number of "individuals intercepted, detained, prosecuted or returned to their country of origin is close to 100." Neither Duarte nor Brito would provide specific details, claiming national security protection.

The paper did quote Duarte citing a 2016 apprehension of "several citizens of Syrian origin who were detained with false documents" and that they were prosecuted and deported. He explained that identifying migrants "of interest" occurs "in coordination with several intelligence and security agencies of the world."

While the uncorroborated claims may warrant skepticism, it should mainly be about the high numbers President Morales cited, "close to 100". More plausible is the claim that at least some migrants with terrorism backgrounds were apprehended on their way north to the U.S. border or that American intelligence and law enforcement services may be in-country pressing to slow and vet this migration flow.

It is well-established now that migrants from origin "sending" countries the United States regards as national security concerns — due to the presence of Islamist terrorist groups in them — have for many years routinely traversed Guatemala on their way to the U.S. southern border. U.S. homeland security authorities have dubbed migrants like this "special interest aliens" (SIAs), as explained in this Center for Immigration Studies Backgrounder, and elaborated on here, here, here, and here. Syrian migrants have been caught in Central America and at the Texas and California borders, and some special interest alien migrants caught in Central America were linked to terrorist networks; Reuters reported last year about a Somali named Ibrahim Qoordheen who was apprehended in Costa Rica and who was reputed to have been on the U.S. terror watch list. That some would be linkable to terrorist organizations is in the realm of likelihood.

I have been to Guatemala to report about this particular smuggling traffic. The country is literally a superhighway for human smuggling of people from all over the world, including the Middle East. As a journalist in 2007, I traveled throughout Guatemala tracing their paths and interviewed numerous current and former government officials there about the Middle Easterners, Somalis, Pakistanis, and others coursing through toward Mexico. I also once visited a Guatemalan consular office in Amman, Jordan, where Iraqi refugees told me their human smugglers were sourcing visas for about $700 each. 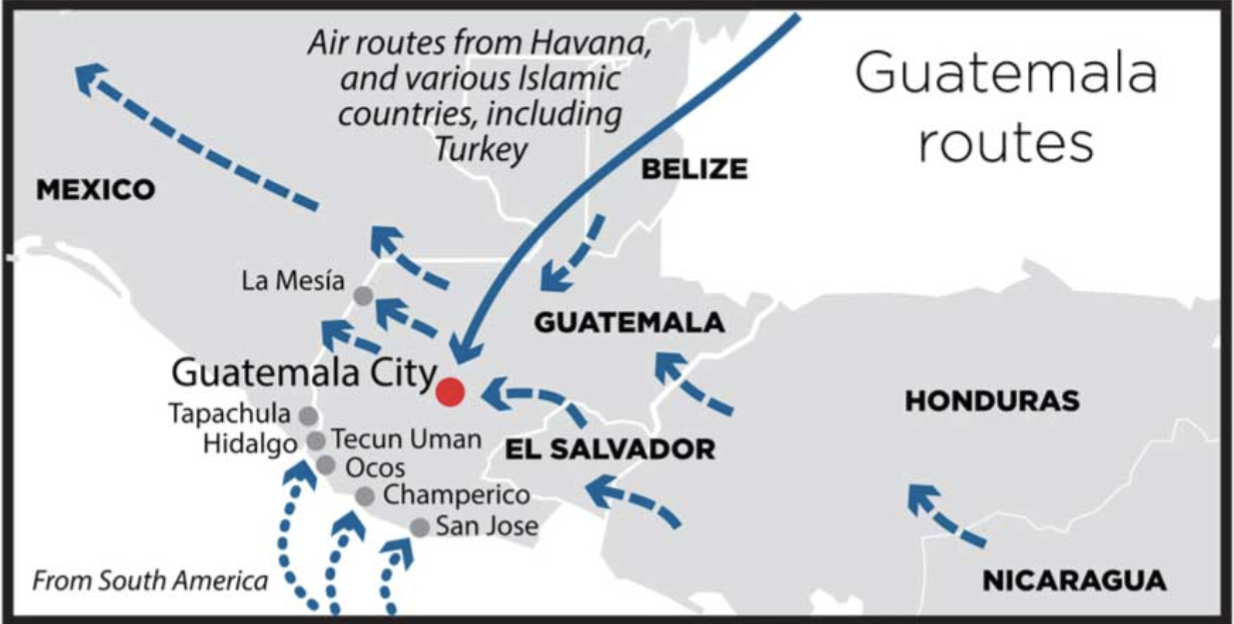 President Morales' claim that foreign intelligence services were helping Guatemala with this security issue is credible. On a reporting trip to Guatemala in 2007, for instance, I met Gustavo Barreno, who served from 1997 through 2005 as Guatemala's federal prosecutor in charge of enforcing his country's human smuggling laws. He described all of his operations with the Americans to interdict SIA smuggling. He told me that joint operations against SIA smuggling had involved American satellites, Coast Guard cutters, and the U.S. Navy.

Today, I asked a journalist friend of mine, who is a Guatemalan citizen and covers the country, what he thought about the report. He didn't mince words in an email:

All of the journalists down here believe that this is bullshit, and Morales is just trying to look good to Pence, Trump, and the U.S., but there hasn't been any reporting or news regarding this issue in Guatemala. Since most of us cover the interior ministry and the police, and they always make a big show whenever they capture someone, we think it's bullshit.

Perhaps my journalist friend is correct. But now that this potentially significant homeland security threat claim has been floated — by the leader of a sovereign country in position to know such things — U.S. homeland security oversight committees, members of Congress, and the U.S. Department of Homeland Security ought to at least run this claim to ground and let the public know what is and isn't true about it.