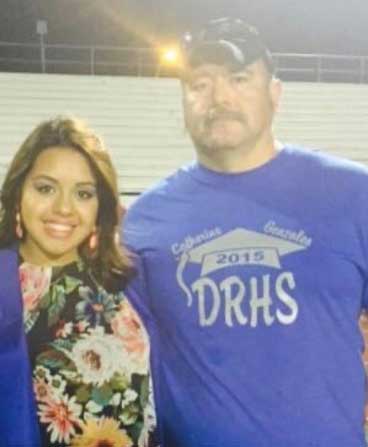 Catherine Gonzales with her father Marco, a Border Patrol agent who died recently of Covid-19 contracted in the line of duty.

U.S. Border Patrol Agent Marco Gonzales was working the brush in the cooking heat of late June one night near his home town of Del Rio when he spotted four or five Mexicans together fresh out of the Rio Grande. Once among them, he noticed all were showing Covid symptoms, his 23-year-old daughter Catherine Gonzales told the Center for Immigration Studies (CIS) last week.

The 49-year-old Border Patrol veteran of 15 years told his family he loaded up the Mexicans in his vehicle anyway, per duty, and drove them to the Acuna-Del Rio International Bridge for their deportation to Mexico, the procedure nowadays under the Title 42 health code invoked to keep detention facilities relatively clear of Covid.

The agent later said he believed these Mexicans passed the coronavirus to him that night despite the gloves and masks all Border Patrol agents get. He was soon complaining of headaches, fatigue, and loss taste and smell. He lasted a couple of painful weeks in the hospital on a ventilator. Toward the end, he was so bloated "you couldn't see his eyes anymore," said Catherine, who is one of three children to Agent Gonzales and has two young ones of her own.

They stayed in touch by Facetime and then, after the ventilator went in, by text. The staff set the phone on Facetime for question and non-verbal answer sessions; he couldn't speak with the ventilator. Catherine asked if he was still fighting "and he would nod". But soon the doctors warned the end was near. Finally, on July 23, her father "just let go." Catherine read his last texts to her from July 18.

“I love all my grandkids. Lots of hugs and kisses and more to come when I get out.”

And this last text to Catherine, in all caps: “I LOVE YOU MY DAUGHTER.” He was buried like the fallen soldier he was Thursday, a Border Patrol honor guard at attention.

The death of Agent Gonzales and at least 10 CBP personnel that Acting CBP Commissioner Mark Morgan recently said had “died in the line of duty because of Covid,” draws sharp focus to a trend that has gone casually dismissed as a racist notion. It is, as reported in Townhall, that America’s borderlands from Texas to California have become Covid-19 battlefields as infected people legally and illegally cross from Mexico’s collapsing hospitals to seek U.S. medical care, or try to slip Border Patrol Title 42 deportations to work in the nation’s interior.

[Read the rest of the story in Townhall.]