Texas DPS and National Guard troops working together on the border near Roma, Texas, July 2021. Photo by Todd Bensman for the Center for Immigration Studies.

AUSTIN, Texas — In a dive into new political and legal water, Texas Governor Greg Abbott has initiated the first-ever border security operations in which thousands of National Guard troops — newly imbued with civilian arrest authority and given 40 hours of traditional police training in the use of deadly force — have started handcuffing illegally entering migrants on state trespassing charges.

Small-scale soldier arrest operations began quietly this week as an unprecedented addition to the state’s ongoing “Operation Lone Star” in close physical coordination with a pre-existing border surge of some 1,000 Texas Department of Public Safety (DPS) officers concentrated in Val Verde and Starr counties, but also expected to happen elsewhere. Abbott has been signaling for weeks that he was preparing a more aggressive use of the National Guard.

Texas DPS Director Steven McCraw confirmed to the Center for Immigration Studies that the first of some 3,000 policing-trained National Guard soldiers to be deployed over the next six weeks have begun filling gaps in the line, making arrests and turning their detainees over to DPS officers who will do the investigation and charging.

“Nobody’s ever really used the guard before in this capacity,” McCraw said. “We’re going to use them to actually secure the border. The governor, the legislature, and the citizens of Texas have made it very clear; they want the border secure. It is good for our federal partner as well. The federal government should be thanking the state of Texas, and it’ll make the rest of the country safer as we increase the level of security.”

The relatively few soldiers now deploying will mainly use their new arrest authority to apprehend single adult male illegal migrants who trespass along state-built border fencing onto some 142 parcels of private ranchlands. Their owners have all entered into state agreements to become complainants in misdemeanor-level criminal trespassing cases that DPS officers will charge (and have been charging since July), McCraw told the Center. The so-called single male “runners” run because they are still subject to federal instant expulsion policy to control the Covid-19 pandemic.

But agency officials also reason that single adult men may pose greater public safety risks, in that some are likely hiding serious criminal histories or are involved in Mexican cartel drug and human smuggling and trafficking.

The state will not arrest adult women, family groups, or unaccompanied minors the Biden administration has exempted from the pandemic expulsion rule and will turn them over to Border Patrol as usual. Migrants in family groups have swamped the border, turning themselves in to exploit an administration practice of legalizing and freeing hundreds of thousands of them, which is often thought to have driven the mass migration crisis to nationally historic heights.

But as additional fencing is installed, the state police line stretches thinner. The soldiers will form “security teams” that will bolster that line as the state fence lengthens. 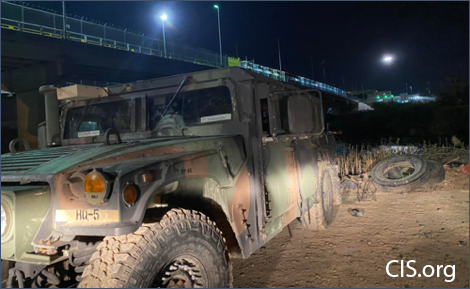 National Guard Humvee stationed under the international bridge at Roma, Texas, in a typical show of “presence”, July 2021. Photo by Todd Bensman for the Center for Immigration Studies.

The idea is for Texas to create deterrence in these lands by installing fencing along the river and arresting adult male migrant runners on state criminal trespassing charges when they climb over or cut through the fencing. This action will deter migrants downstream who hear about what Texas is doing from friends, relatives, and the media, McCraw reasoned.

“The governor’s objective is to prevent people and illicit drugs from illegally entering Texas between the ports of entry as opposed to responding to it afterward,” he said.

CIS was told that state police will continue taking the arrested migrants to expanded county jails or designated state detention facilities managed by the Texas Department of Criminal Justice for adjudication by local county and district attorneys and judges. Arrested migrants face greater jail penalties enhanced by Abbott’s June border disaster declaration, renewed on September 28, from a 30- or 90-day jail sentence for criminal trespass to 180 days.

“The goal is to prevent and deter and not to tie up resources apprehending and prosecuting,” McCraw said. “We recognize that arrest and prosecution is a deterrent in itself.”

The Texas National Guard arrest operations, as they mature and expand with the state border fence in the coming months, will redeploy to wherever else the illegal migrants think they can avoid arrest — and arrest them there, too, he said, to maintain the deterrence impact.

At the moment, Texas DPS has identified 23 “high priority” problem areas that are now being addressed.

A Risky Departure from Business as Usual

The governor’s move came after preparatory steps; starting in June, Abbott issued multiple proclamations that set the stage for him to use the guard and Texas DPS troopers to do more immigration-deterrence operations. In a July 27 letter to Texas Military Department Major General Tracy R. Norris, Abbott ordered “that the Texas National Guard assist DPS in enforcing Texas law by arresting lawbreakers at the border.”

The initiative is a notable departure from how governors have used the National Guard on the border during the current mass migration crisis and past ones. In Texas, during much smaller-scale crises in 2014, 2017, and 2019, the soldiers took hands-off support roles to spot and report illegal migrants to the U.S. Border Patrol, project a deterring presence, provide security, and to fill transportation, administrative, and intelligence functions.

But never have soldiers been given explicit arrest authority on the border and orders to arrest illegal immigrants. Nor has any governor devised a police training course for regular soldiers deployed for such duty to the international border.

“We will soon be in a position to actually deter transnational crime, rather than react to it after it spreads throughout the state and nation,” McCraw said.

Officials say the initiative is in relative infancy now, but will expand quickly as new National Guard soldiers are deployed and receive their 40 hours of police training in Fourth Amendment rights and the use of deadly force. That training is currently being delivered by DPS officers at military bases and in the field along the border. No special certification was created.

Under old rules, soldiers were not allowed to have their ammunition magazines inserted into their rifles during daytime shifts at the border, nor were they allowed to have rounds inside firing chambers at night, many of the troops told CIS in recent months.

But under the new initiative, soldiers who have undergone the deadly force training will be fully armed and, while trained to understand restrictions on use of force, will be authorized to use it if directly threatened. They will not be able to pursue fleeing suspects in vehicles, however, an activity that requires more extensive police training.

“It’s not like they’re out there by themselves,” McCraw said. “Our troopers will always be close and provide the necessary support when an arrest is made by a soldier and work closely with the local prosecutor where the arrest occurs.”

Still, the new way undoubtedly carries significant political and legal risks should one of the soldiers make a mistake, or an illegal migrant complains of abuse or is hurt during an arrest.

As for detention space, Texas has already identified and prepared state facilities, such as a 1,000-bed facility in Dilley, Texas, and other state-controlled spaces further inland. Plans are in play to build soft-sided holding facilities that will need to be approved under the state’s jail standards regime, which may take some time.

To date, oddly, national media has avoided reporting on Texas’s new use of the guard troops for deterrence duty. But inevitably they will find the story and controversies are in the offing that may slow or halt the initiative.

For instance, the Biden administration and advocates of mass illegal immigration have strenuously objected to gubernatorial proclamations that have paved the way for a more sharp-toothed Operation Lone Star. The administration seems to be in a fighting mood over the Texas plan.

The Biden administration filed a lawsuit over a gubernatorial executive order directing state troopers to either reroute back to a border port of entry or seize vehicles carrying migrants if police believe the migrants have Covid-19. It has threatened to sue over other state ideas, such as a plan to pull state licenses from any shelter or foster care facility housing unaccompanied migrant children.

But other undermining currents are far less visible than big-player state-federal litigation.

A Way to Neutralize the Deterrent Impact?

It’s unclear whether locally elected county attorneys in traditionally Democratic counties such as Val Verde, Starr, Webb, Hidalgo, and others along the border will accept the DPS charges or find ways to undermine the deterrent impact the Texas government is trying to achieve.

Of the 1,300 cases DPS has already charged, no one seems to have asked how many these county attorneys prosecuted to a deterring end. But there are already signs that Democratic county attorneys, who handle misdemeanor charges, are looking for ways to drop them.

For example, Democratic Val Verde County Attorney David Martinez of Del Rio, Texas, told the Center for Immigration Studies that out of 231 DPS misdemeanor cases filed since July, he has dismissed or rejected 105 on his judgment that none caused any harm to the landowner.

Martinez said he dismissed some because they planned to file what sounded to Martinez, after listening to their defense attorneys and personal stories, like meritorious asylum claims.

He cut guilty plea deals with 50 others, but recommended to the judge that none get jail time beyond what they’d already spent in custody, which was anywhere from 15 to 45 days. He said he did so to save taxpayers in a poor county the significant expense.

“At the end of the day, my office is not enforcing immigration laws. They’re being charged with trespass,” the Val Verde County attorney said. “What I can tell you is this, as I’ve considered every aspect in those cases we have dismissed, I’m pretty confident those individuals didn’t break anybody’s fence, didn’t cause destruction, didn’t linger, didn’t harass anybody in their home. They’re simply crossing what to them looks like open rural land.”

Martinez said he believes the arrests, whatever the outcomes, still act as a down-trail deterrent on other migrants making their way in.

But that’s far from certain because of something else Martinez disclosed to CIS, which is that the Biden Department of Homeland Security has figured out a way to undermine the state’s intended deterrence impact.

Martinez said that, once a migrant is released, Immigration and Customs Enforcement officers are not ordered to instantly expel them to Mexico under the pandemic public health protection rule as they would most single males caught in the brush, but is instead paroling them all straight into the United States to pursue asylum claims.

Other county attorneys will follow different practices, of course.

But the Val Verde County outcomes — limited jail time or dismissal followed by lawful release into the American interior to pursue an asylum claim for years, rather than instant expulsion to Mexico — might well be perceived among adult male migrants as an outsized reward for getting caught in a state trespass case.