Texas Responds to the Border Crisis

[Disclosure: The author worked for the Texas Department of Public Safety’s Intelligence and Counterterrorism division from 2009-2018.] 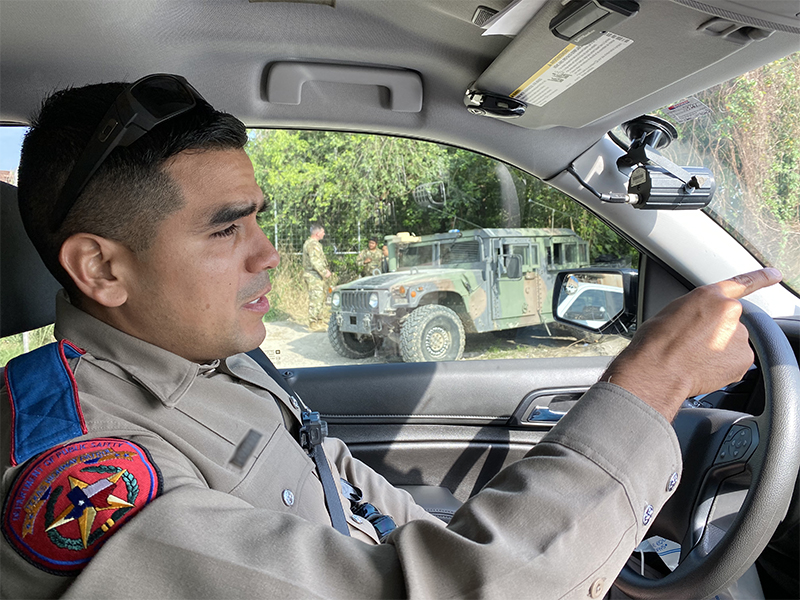 A Texas Department of Public Safety Highway Patrol officer, now working on the banks of the Rio Grande border with the also-deployed Texas National Guard. Photo by Todd Bensman.

ROMA, Texas — The rafts filled with women and children started crossing the Rio Grande and landing on the Texas bank after night fell, in the immediate vicinity of the Roma-Ciudad Miguel Aleman International Bridge.

The first rubber raft loads immediately tied up the few U.S. Border Patrol agents on hand under the bridge with taking down names, taking photos of each immigrant, and loading them into transport vans. So the supervisory border patrol agent overseeing this bureaucratic processing work asked a nearby police officer to handle newly arriving rafts crossing here — and then there, and then here again.

But nothing in the police officer’s training had prepared him for this federal immigration duty. He was a Texas Department of Public Safety officer on a SWAT team, trained for storming buildings and armed combat with dangerous criminals. So he collects intelligence information about their smugglers and about anything they saw on the Mexican side.

“Esta bien? Esta bien?” the state police officer asked two teens he’d just found on the river bank as their raft smuggler paddled away in his plastic craft: “Are you okay?”

DPS officers had turned over 30,000 immigrants to Border Patrol by May 1, but did much more that could be regarded as serving state anti-crime interests that happen to dovetail with national border security interests: busting cross-border drug smugglers and criminals with warrants on them and seizing drugs and cash, for instance.

Staking such state jurisdiction claims on traditionally federal responsibilities is unusual; none of the other border states — New Mexico, Arizona, or California — have similarly stepped up despite elevated apprehensions of illegal immigrants in those states, albeit nothing like the volume coming across the border in South Texas.

“Operation Lone Star”, which Republican Governor Greg Abbott rolled out in March, doubled the state’s law enforcement presence in the Rio Grande Valley Border Patrol Sector at the southern tip of Texas to 1,000 personnel, at a cost to the taxpayers of Texas. Just for DPS, the draw is $10 million a month and another monthly $6 million for the Texas National Guard deployment. 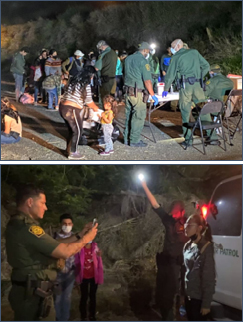 The $16 million monthly price tag is only a down payment, though. DPS Director Steven McCraw said his agency is opening up new operational fronts to counter heightened criminal drug smuggling and cartel mischief in the Del Rio and El Paso sectors hundreds of miles up-river. The whole enterprise is expanding fast.

The reason? In an initial press release, Governor Abbott said he ordered up Operation Lone Star on the grounds that “the crisis at our southern border continues to escalate because of Biden Administration policies that refuse to secure the border and invite illegal immigration.”

DPS chief McCraw elaborated: “New federal policies are encouraging them [illegal immigrants] to come, which makes the state more vulnerable to criminal threats,” he told the Center for Immigration Studies. When Border Patrol is busy “papering the immigrants in”, McCraw said, the drug smugglers and human traffickers would use the empty gaps to do their damage on Texas.

“The point is not to claim any federal authority, but when the border is not secure, it’s a public safety threat to all Texans,” the director reasoned.

Indeed, most Border Patrol agents in this region privately admit they are largely off-line since the Joe Biden administration decided to accept unlimited numbers of illegal immigrant families and unaccompanied minors. More than 600,000 have answered that de facto invitation between January and March, historic numbers and with no indication the administration intends to pull the gates shut.

“You have a wide array of state violations. Human smuggling, possession of narcotics, driving while intoxicated, people that are wanted,” Escalon said. “Half and half, you see either sex offender, wanted for a crime, they have a lengthy criminal history. They’re a felon. They have weapons. And they’re also smuggling. So we have all these hooks. There are plenty of state charges, without a doubt, that are easy to identify, so that’s why we’re there.”

A Prayer to the “Pursuit Gods”: What Operation Lone Star Looks Like

A gap in the border wall. Photo by Todd Bensman.

On air, land, and water, the Texas state police are working these so-called gaps. Officials claim impressive statistics in Operation Lone Star’s early first months that, arguably, would not have accrued without these forces: 920 arrests, 225 vehicle pursuits, 956 aircraft agency assists, 5,770 pounds of seized marijuana and 95 pounds of cocaine, 62 firearms taken off the street, and more than $1 million in cash seized.

Perhaps the most visible aspect of Operation Lone Star are the Texas Highway Patrol vehicles that are now ubiquitous at the traffic lights, vacant lots, and store parking areas of border towns like La Gruella, Sullivan City, and Fronton. DPS vehicles can be crunching slowly over rough riverside roads or parked under trees. CIS rode with a trooper for half of a recent daytime shift.

“Our number one thing is drugs,” said “Lupe”, a DPS trooper who asked that his identity not be fully disclosed for security reasons. “Most of the time, Border Patrol is just cutting paper and letting the illegals go. Poor guys . . . they’re hands are so tied. . . . It’s hard for them to do anything anymore.

“But when Border Patrol is busy with a hundred illegals like that, we’ll work the flanks where the drug smugglers go. They’re very strategic, so we’re strategic.”

Lupe and all DPS troopers are dialed in to Border Patrol radio. They rush to and around immigrant apprehensions, chases, and any incident in line with radio traffic, which spikes and ebbs as shifts go on. They’re looking for the drug traffickers, who more often than not will flee when the lights flash behind them.

A primary duty is pulling people over for various violations as a means to detect signs of smuggling. That kind of activity has spurred a rise in high-speed chases in these towns and cities as wrong-doers flee flashing lights. That’s how a wanted Mexican Mafia assassin recently came to open fire on a trooper who’d pulled him over. The gunman fled on foot into the brush as another officer fired back. The pair went in after him and eventually made the arrest.

Despite the dangers, Lupe loves the flush-and-chase aspect of the job, quipping that before each shift lately he “prays to the pursuit gods” to give him some good ones. But that’s getting harder and harder as the criminals smarten up to the DPS tactics.

Santa Muerta sticker on a pickup. Photo by Todd Bensman.

Since Operation Lone Star began, the smugglers who inhabit the Texas side have learned to make sure tail lights, registrations, and insurance papers are all good, to make it harder to be pulled over. Lupe began trailing a truck whose owner displayed a “Santa Muerta” symbol on the back window, the “saint of death” said to be worshipped by drug cartel operatives. But Lupe could find no violation as he ran the license plate through his on-board computer. The driver moved at exactly the speed limit and properly signaled lane changes, and Lupe let the driver eventually disappear from sight.

Lupe’s pursuit prayers were answered recently, when he flushed a marijuana smuggler he’d tried to pull over. The driver hit the gas pedal instead and careened at high speed down a dirt road to the river. Along the way, the smuggler’s well-practiced compatriots threw a log onto the road, then closed ranch gates to slow Lupe down. Those moves bought the driver time to drive his car and marijuana load right into the river. By the time Lupe showed up, the driver and his associates were floating away on a raft with the drugs back to the Mexican side. 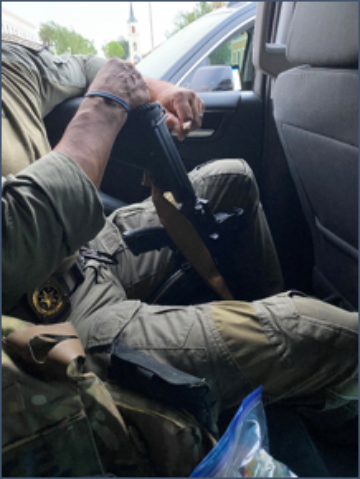 A member of a DPS Special Response Team waiting for the go order on an operation to catch marijuana traffickers. Photo by Todd Bensman.

When Lupe and other DPS troopers happen across illegal immigrants wanting to turn themselves in for the sure-thing legalizations they know they’ll receive from Border Patrol, Lupe says he’ll interview them for intelligence about their smugglers or abusers and later pass the information on to law enforcement. Then he delivers them to Border Patrol as quickly as possible and returns to the field to keep the heat on. Other times, the immigrants don’t want to get caught. They’ll run. DPS will chase.

Guided by radio traffic about a group of 10 who were on the run somewhere and an increase in radio traffic generally, Lupe drove to an area “to see if I can position myself”.

Positioning is important, he said, because “if you don’t get there in seconds, they’re gone. It happens so quick. If you’re not ready, they’re gone.”

DPS also has sent in special response teams of highly camouflaged officers who will hide themselves for hours in the brush all day and night, stalking known drug trafficking trails.

In the Air and on the Water, Too

DPS is in the air with extra helicopters and fixed-wing aircraft, with a goal of having state officers up at least 22 hours per day trying to spot illegal immigrants and smugglers and to lead ground forces to them.

DPS Lt. Pilot Valente Rosas described a typical shift before taking CIS up on a standard 90-minute patrol over the Rio Grande.

“Groups of people coming over, those are probably about 80 percent of the work that we do because of the amount of people coming in,” Rosas said. “Yesterday, we had a pursuit. We responded to a trooper who got involved in a shooting. It varies. Every day is different.”

It’s a game. Cartel spies come to the airport and learn the DPS flight patterns.

“I’m sure they know everything about us,” Rosas said. “We’ve had situations where the people have parked out here taking pictures. It’s not hard for somebody to sit across the road and watch when we leave and come back. They know what we’re doing, and we try our best to counteract that.” 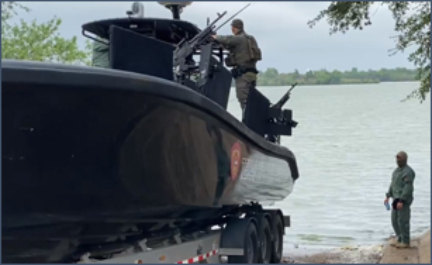 Others are neither flying nor driving.

DPS also deploys gunboats on a 40-mile stretch of the Rio Grande to deter drug smugglers and occupy that space as best as possible. The boats have been on these waters for years, but shifts have been increased now. The crews include a medic for immigrant rescues and other eventualities.

There for the Long Haul

DPS leaders refuse to put an end date on this deployment. The last time DPS similarly invested in border security like this was during the Obama administration years with an initiative called “Operation Strong Safety”. It went on for four years at a cost of some $800 million.

Cost doesn’t seem to be an issue, and DPS is now expanding the operation to other areas further upriver that are experiencing mass migration, including the Del Rio and El Paso sectors. But DPS Director McCraw said the state legislature has developed a good knowledge about its border and feels repulsed by what happens there, such as the sex trafficking of women and children over it.

“It costs money, yes; it takes sacrifice,” DPS Director McCraw said. “This is a congressional responsibility. But short of that happening, Texas is going to do its share and more.”