A limited crackdown on the human smugglers' paradise it has created 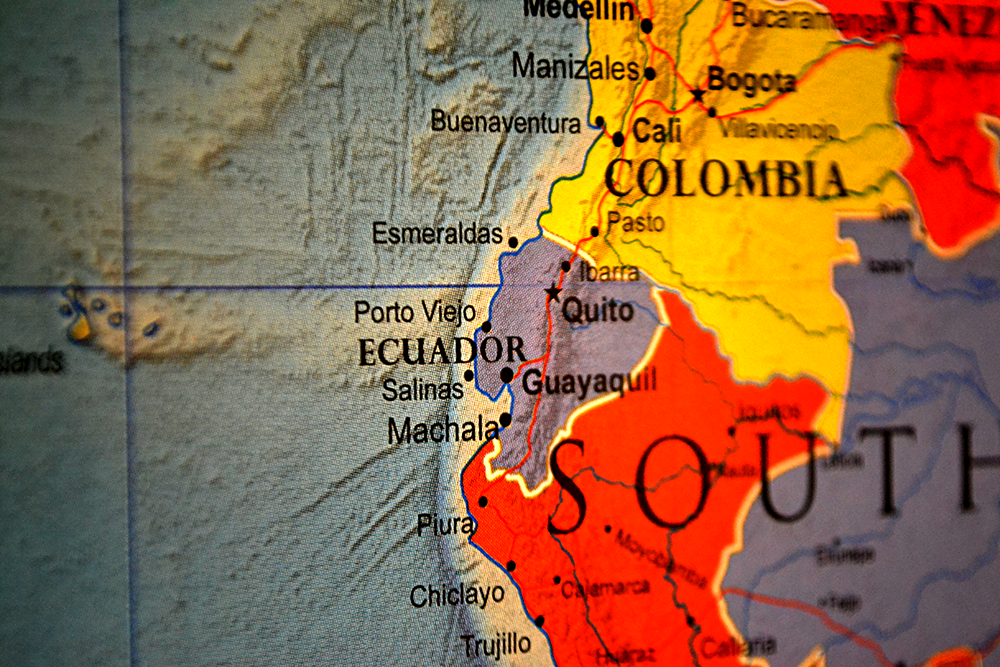 The South American country of Ecuador can be described as many things: a tourist mecca for its Galapagos Islands, the country that harbored WikiLeaks founder and fugitive Julian Assange in its London embassy for seven years, and soul-keeper of the vanquished Inca civilization.

But an important battleground in America's war over illegal immigration to the U.S. southern border? The answer is a resounding "of course."

For decades, especially the last one, Ecuador and its Mariscal Sucre International Airport near the capital city of Quito have served as an international human smuggling paradise, a primary landing zone into the Western Hemisphere for untold thousands of U.S.-bound "extra-continental" and "special interest alien" immigrants flying in from all of the world's trouble spots. From the Quito launch pad, immigrants stepping off international passenger jets from China, Africa, and the Middle East then set off on ground journeys to next-door Colombia, into Central America through the Darien Gap, north to Mexico, and finally to the U.S. border for illegal entries and asylum claims.

In 2008, Ecuador supercharged itself as a human smuggling paradise when leftist President Rafael Correa, declaring an end to "this 20th Century invention of passports and visas" and deifying the "principle of universal citizenship", decided to unilaterally lift all visa requirements for anyone in the world to enter Ecuador without permission. Long-haul smugglers naturally flooded Ecuador with Iraqis, Pakistanis, Syrians, Iranians, Chinese, Indians, Africans, and many others on their way to America.

That was still the state of things when I reported in a July 1 post that tens of thousands of these kinds of immigrants, emboldened by seeing from afar the total breakdown of U.S. border controls, were surging through this route, often via Ecuador, to exploit the advantage. Later, in an encampment of extra-continental migrants at Acuna, Mexico, just last month, across from Del Rio, Texas, I interviewed Congolese and Cameroonian migrants who told me they and everyone else they knew from their countries currently waiting to cross the border had first flown into Ecuador.

Someone in President Donald Trump's administration must have realized that Ecuador, certainly as much as Mexico and other countries Trump emissaries have been visiting lately, was an important piece of the policy puzzle to end the border crisis without help from the divided Congress. Because, although there is no public reporting of Trump administration pressure, Ecuador's ministry of foreign affairs recently announced with no fanfare that it has increased the number of countries whose citizens will now need a "special visa" to enter the country going forward. The government emphasized that citizens from more than 90 percent of the world's countries can still enter with only their passports.

It is certainly no coincidence that many of these are among the source countries of migrants whose numbers are currently elevated at the U.S. border and moving through Mexico, which suddenly has begun forcibly interdicting them in recent weeks.

Military police officers clash with migrants from Africa, Haiti and other countries during a protest in front of an immigration center in Tapachula, Mexico, demanding free transit through the country to reach the United States, Tuesday, August 27. (AFP) pic.twitter.com/wPzdfcjk7d

Why did Ecuador choose now to add the 11 countries to what is essentially a travel ban? I can find no U.S. media coverage of this Ecuadoran development or its significance, unsurprisingly since the American media is notoriously inadequate and uninterested in covering how illegal immigration actually works. I suspect Trump administration involvement after at least three suspected ISIS terrorists (from Iraq) apprehended in Nicaragua earlier this summer were found to have originally landed in Ecuador, an incident I reported on in a June 26 post.

Ecuadorian Interior Minister Maria Paula Romo made mention of the ISIS suspects when she told local media that Ecuador, in reviewing proposed revisions to Ecuador's "Human Mobility Law", realized the country was "being used as a point of entry for people involved in human trafficking and possible terrorist activities." Romo mentioned the three ISIS suspects as having entered South America through Ecuador.

None of this is to say that what Ecuador did will completely plug the gaping hole in this part of the dam. This assessment is based on prior experience when Ecuador, under U.S. pressure to help reduce the risk of terrorist border infiltration, put special exceptions on citizens from Muslim-majority nations the United States considered problematic.

Two years after Ecuador laid out its visa-less welcome mat in 2008, the United States threatened to cut off millions in foreign aid if the country did not put restrictions on 10 nationalities regarded as a terrorism infiltration threat to the southern border, according to Luisa Feline Freier in a 2013 paper for the Center for Comparative Immigration Studies. Immigrants from Afghanistan, Somalia, Bangladesh, Eritrea, Ethiopia, Kenya, and Pakistan were to be exempted from visa-free travel, as well as anyone from Nigeria, Nepal, and Senegal.

Freier, however noted that the quality of Ecuador's enforcement was questionable after that first list went into effect. In her paper, she cited secret U.S. diplomatic cables published by Wikileaks showing that American diplomats felt compelled to keep bothering Ecuador after the restrictions were enacted, based on concerns that Ecuador was not enforcing them. By 2011, the United States deployed the FBI to Ecuador and pressured the country into making mass arrests of Muslim immigrants in Ecuador, especially Pakistanis pooling up in the country who were interviewed by the FBI.

Human smugglers and those bent on reaching the U.S. border are notoriously adaptable. They can be expected to either corrupt Ecuadorian inspections and immigration personnel, or simply try other countries like Brazil, Nicaragua, and Peru to get to the American border.

But because this Ecuadoran move came at a better time than the first list in 2010, there's a better chance that Ecuador may be taken off line for the first time in years, which could reduce the surges of Africans and special interest aliens in the long run.

Ecuador's new president, Lenin Moreno, replaced leftist former President Correa two years ago. He and his administration are seen as friendlier toward the United States and more authentically amenable to its national security interests. Perhaps enforcement of the visa restrictions will actually happen under the new regime.

Ecuador is geographically distant, but immigration-conscious American policy-makers should not discount its linchpin importance in the current immigration crisis and hold Ecuador to account on enforcing its list.

Also, as an aside, if the Trump administration had anything to do with taking Ecuador off line for currently surging nationalities of higher risk to U.S. national security, it should be credited for yet another immigration policy achievement in a patchwork of diplomacy-based arrangements with Mexico, El Salvador, Guatemala, and other countries that has significantly slowed illegal border crossings in recent months.