The Next Influx: The Entire World's Poor and Dispossessed

Like the proverbial "bulge in the belly of the snake," unusually high numbers of non-Latino migrants, obviously not from Central America, are now reportedly passing from Colombia through Panama on their way to the U.S. southern border. Their numbers range to the tens of thousands, whose vanguards we have already seen at the U.S. Southwest Border in recent months: Cameroonians, Ghanaians, Congolese, Haitians, Cubans, and some from the Middle East.

Word of their successful entries into the United States this year clearly reached home countries because now a swell numbering as many as 35,000 is on an infamous migrant passage through which migrants have long funneled from South America to North America: the Darien Gap. 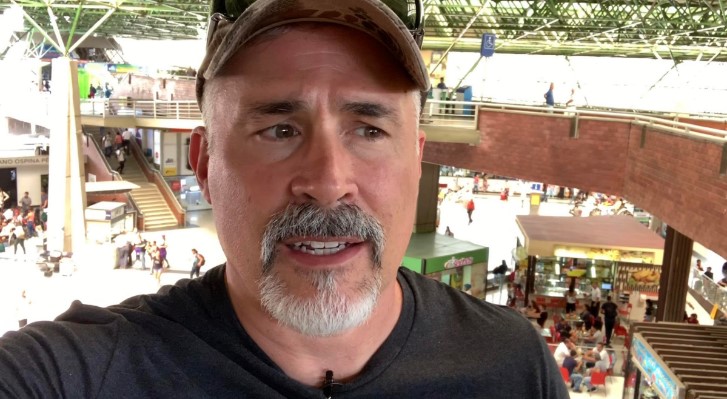 I am told this by two eye-witnesses who have just returned from the Colombia-Panama region on either side of the Gap. One of them is Panama-based author and freelance journalist Chuck Holton, who just visited the Colombian side in the frontier border town of Turbo, which is notorious as a migrant staging area for U.S.-bound migrants to be smuggled through the Darien Gap passage into Panama. The other source is Diane Edrington, a Mississippi-based nurse practitioner who has worked for years as a Panama Missions volunteer and who just returned from camps I visited in December on the Panama side of the Darien Gap.

Neither Colombia nor Panama routinely collect and publicly release data regarding migrant flows through their territories, which American homeland authorities often refer to as "exotics" or "extra-continentals" because they are from outside the Western Hemisphere.

But Holton and Edrington separately told me in recent phone and email interviews that a surge is underway the likes of which neither has ever seen and which obviously surpasses what I witnessed in December. Both saw massive numbers of Africans overwhelming government camps and smuggling infrastructure as they push through to repeat the successes at the U.S. border of those who have gone before them. Government sources, such as local military commanders, a Colombian harbor master, and migrant camp overseers told them many thousands have gone through in recent weeks and are in the pipeline on both sides of the Darien Gap passage. Holton and Edrington did not hear any of this from afar; they were on the ground, among the migrants. 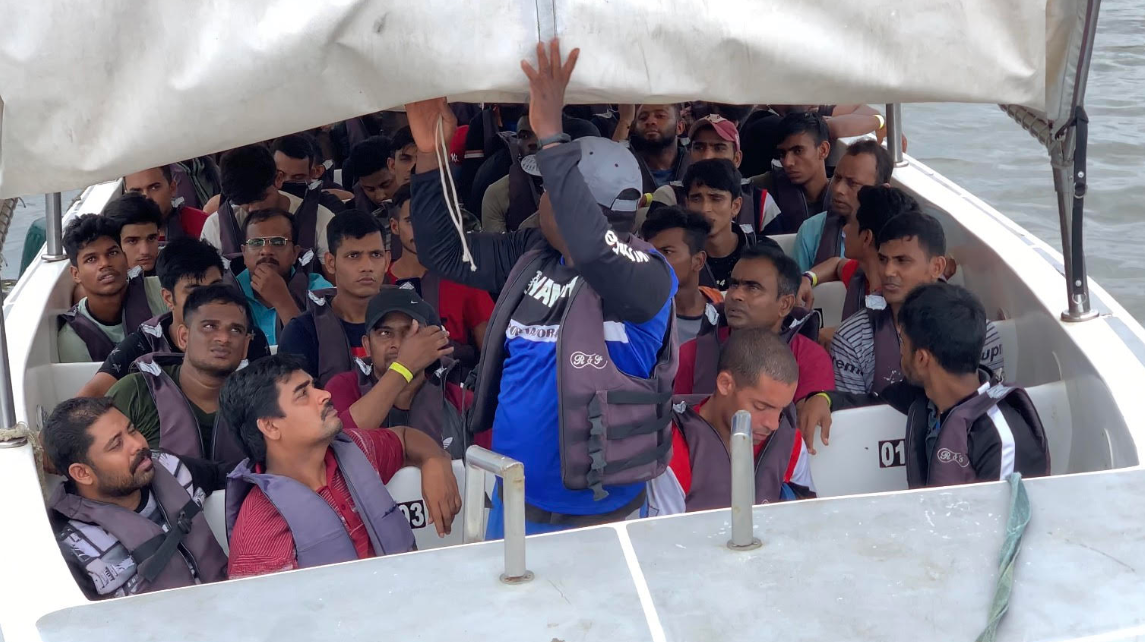 Holton told me he interviewed many migrants on the Colombian side who uniformly told him they decided to go to America, claim asylum, and take advantage of the disarray and laws about which they've all heard, from media reporting and those who already made it, that guarantee they will get to live and work for years in the United States, and probably permanently.

"'Trump wants to keep us out, but he can’t do it,'" Holton said he was repeatedly told in Turbo, Colombia as African migrants were preparing to board boats to the jungle trails for 10-day, smuggler-led wilderness treks into Panama. "They were very clear about that. 'If I can get in now, I'm going to get while the getting’s good.'"

Holton said everyone knew to go to American "sanctuary cities," where local authorities won’t cooperate with Immigration and Customs Enforcement.

"They have some level of understanding of what a sanctuary city is. 'If we can get to one of those they won’t mess with us; They won’t get us out.'" 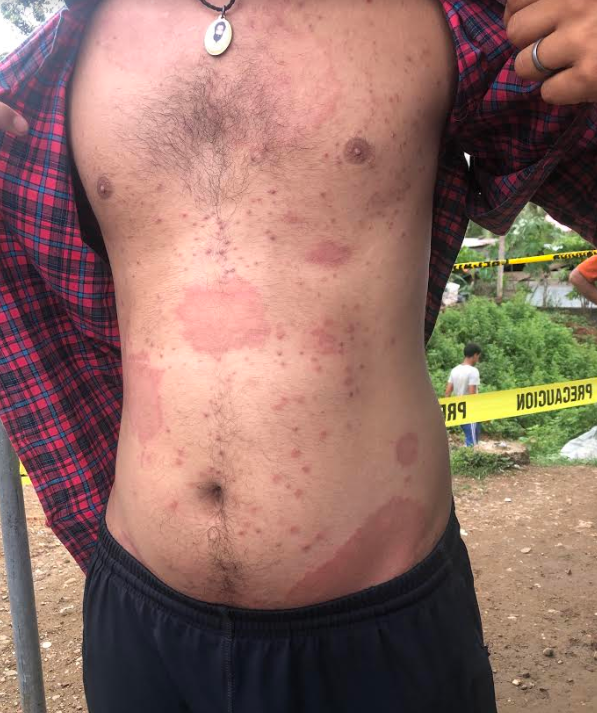 Migrant in Panama with an unknown skin ailment. Photo by Diane Edrington, June 2019

The migrants he interviewed also were well aware of the time it takes for their asylum claims to be processed in a severely backlogged American system and that this was a major factor in deciding to leave home. (Migrating for improved lifestyle or economic reasons are not among the factors covered by U.S. asylum law).

"A lot of these guys obviously do not qualify for asylum," Holton told me. "When they talk to me, they don’t have a problem telling me it's for economic benefits, to get a better job, to have a better life."

No matter, Holton said. By claiming asylum, "They know they’ll have to let them into the U.S. and that they can stay for at least three years" before any ruling on their claims comes back. "They’re very clear on that."

Holton said government sources on both sides of the gap estimated that 35,000 were in the pipeline. The majority appear to be Cameroonians, Congolese and Ghanaians, the largest numbers of those migrants he has ever seen and who now appear to outnumber the traditional fare of Haitians and Cubans. Every migrant he interviewed said they'd flown into visa-free Ecuador and caught buses or rides to the Colombia-Panama frontier, where they'll hook up with Darien Gap smugglers. He met and saw many from India and spoke to Pakistanis and Bangladeshis, which U.S. homeland security regards as "special interest aliens" who could pose terrorism threats.

The harbor master at Turbo told Holton the growth in traffic of Africans and Middle Easterners was rapid and surprising, and close to overwhelming the town’s ability to move them. Holton said he saw no one from the Middle East but did see and talk to some Pakistanis who had come in after landing in Brazil.

While the Turbo harbor master may have expressed surprise at this migration surge, Holton is not. Media throughout Latin America constantly reports on the most minute details of how and why migrants are able to slip through the American border gauntlet, certainly usable as an instruction manual. For years, Holton said he’s seen CNN running "these infomericals" explaining the process of getting into the United States. "It provides lists of cities that will welcome you with open arms, things like that,” said Holton, who lives in Panama and travels the region extensively. 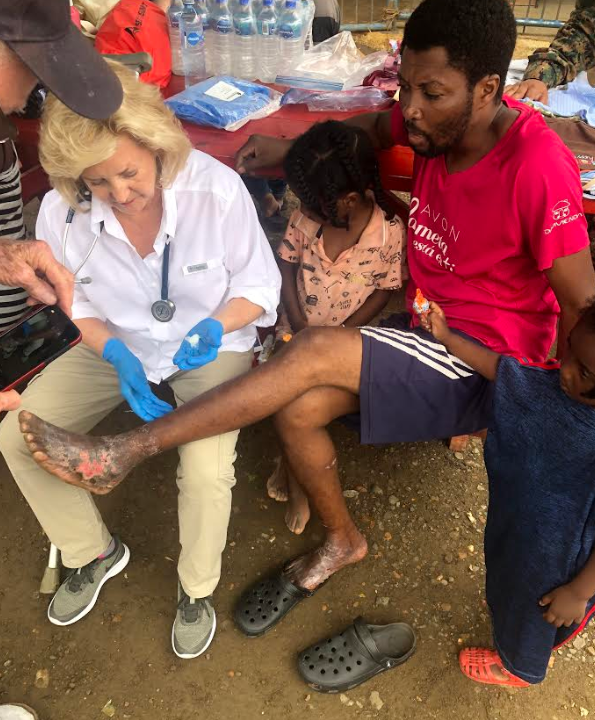 For an idea of what’s happening on the Panama side, consider this anecdote: Just this past December, I visited the Darien Province where the northbound migrants exit the jungle and are caught and placed in camps. One of the camps I visited, known as Las Penitas held about 100 or so migrants on the day I visited. A Panamanian military police commander in nearby Yavisa told me his troops were collecting about 700 migrants a week off the Darien Gap trails. Now the numbers are up to three times that and escalating fast out of the gap.

Diane Edrington of Panama Missions emailed me from the camp on June 17 after 10 days on the ground to report that 1,300 had completely overwhelmed the place. She went on to say that Panamanian authorities had reopened other camps to handle the overflow. The nearby Lajas Blancas camp had to be reopened and was holding 2,000 more migrants, and another previously closed camp in Yavisa was holding 1,500.

Edrington has been volunteering in the camps for years.

"They’d been coming, but now they’ve reached a point in Panama where they’re overwhelmed. It seems like there are more countries represented. There are a lot of Africans now."

After my own trip to Panama and Costa Rica, I disclosed the existence of a formal bilateral policy by which both countries systematically transport migrants coming off the Darien Gap through their own territories and on to Nicaragua, where the smugglers can pick them up and keep them moving to the U.S. border.

Controlled Flow would likely spark controversy in the United States if anyone knew about it. The way it works is that Panama feeds, houses, shelters, and medically treats the migrants it collects out of the Darien jungle, then puts them on buses and hands them off to the Costa Ricans, who likewise move them to Nicaragua’s border. In this way, neither country gets stuck for long with large numbers of unwanted migrants, even though this just passes the hot potato problem to the U.S. southern border.

But now, according to Edrington and Holton, the policy is out of control due to the overwhelming pressure of the new influx. Part of the problem, Holton said, is that Costa Rica refuses to take more than the usual 200-300 migrants per week, leaving them pooling up in Panama, which is growing increasingly frustrated.

"They're really backing up in Panama, so something’s really going to have to break," Holton said. "Panama doesn’t want them. Panama has spent millions of dollars this year that they really don’t have to spend on that."

Of National Security and Marshall Plans

The policy implications of this new higher traffic coming at the border are at the very least two-fold.

During the Democrat presidential debates, candidates put forth as a primary solution to the Central American illegal immigration crisis at the southern border a "Marshall Plan," ala the economic rehabilitation of Europe after World War II, by which Americans would invest billions to build the economies of Honduras, El Salvador and Guatemala. The idea, according to candidates like San Antonio’s Julian Castro, is that a Marshall Plan would reduce the economic push factors driving hundreds of thousands of migrants to the southern border.

The new influx on its way to the American border puts this idea to a harsh logic fallacy test.

If a Marshall Plan is the ideal solution for mass migration influxes from wherever, what then about Cameroon, the Democratic Republic of Congo, Ghana, Haiti, Cuba and any other country whose population suddenly decide to transfer over the American border? How about a Marshall Plan for the entire world of impoverished nations? These questions should be raised when this particular influx hits the border in earnest.

Secondly, the new influx also must raise security questions when it starts to wash over the border. Migrants from the Middle East and Muslim-majority nations where terrorist organizations operate are in this extra-continental flow and often arrive with no verifiable identification. That’s a national security vulnerability that must be adequately acknowledged and dealt with, especially when one considers reporting about this reputed ISIS plot to send operatives over the U.S.-Mexico border and the recent apprehension in Nicaragua of two Iraqis and two Egyptians reputed to be affiliated with ISIS.

I've already raised the issue that migrants who reach our territory from the Congo require special security vetting, since we don't know whether they may be the persecutors or the persecuted in a country brimming with ISIS jihadists and marauding tribal militias that work hard to outdo each other's atrocities. Likewise, I've explained why Bangladeshis coming off the Darien pose a unique security issue due to what’s going on in that country.

Lastly, American lawmakers will need to consider the broader question of how to turn off this flow at its Panamanian and Costa Rican spigot, wide open now due to the Controlled Flow policy. One way, as I've also suggested among this list of eight policy recommendations, is for the United States to help Panama pay for a nonstop airlift of repatriation flights to homelands all over the world.