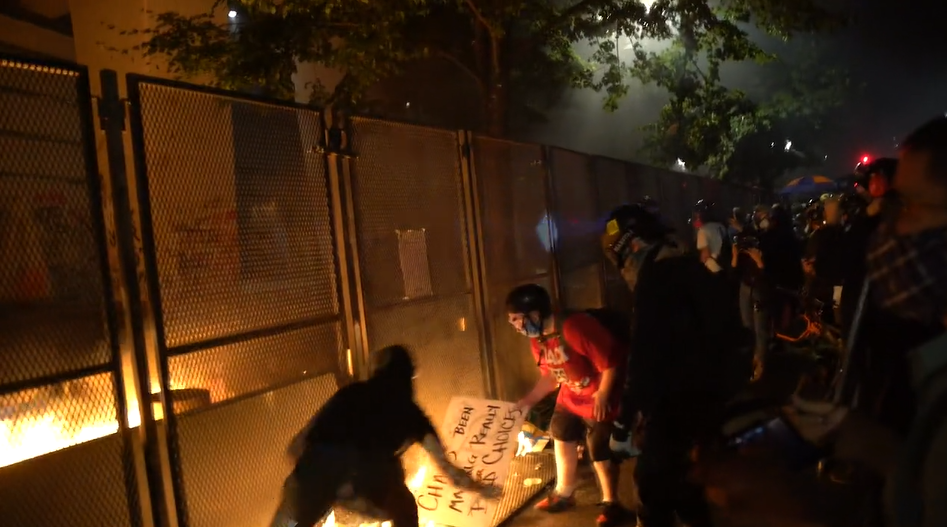 Since the Trump administration deployed Department of Homeland Security agents to help the exhausted and overwhelmed Federal Protective Service save federal buildings from weeks of rioting in Portland and other cities, live video streaming and heavy news coverage from the anti-police rioter perspective have saturated the American public.

But amid the din of Operation Diligent Valor and protection operations in Portland, little is heard from the federal agents standing their ground against the nightly assaults against federal property – seen as symbols of the hated Trump administration – such as downtown Portland's Mark O. Hatfield U.S. Courthouse. Unusually, many of the agents sent for riot-control duty on the front line around the courthouse were drawn from DHS component agencies such as the U.S. Border Patrol and Immigration and Customs Enforcement.

DHS so far has not allowed reporters to embed with the agents on their side of the Portland siege line to sample what the battle might be like for them. But one DHS employee who is there agreed to share impressions and experiences with CIS anonymously from the federal agent point of view. Following are excerpts, in no particular order (language warning):

Transposing hatred for the president

A totally surreal experience. You get large, nonviolent demonstrations where people march, they chant, they give speeches, then shortly after are replaced with a smaller crowd, though still large, who immediately start trying to break into and destroy the federal courthouse. They have transposed their hatred for the president and for law enforcement onto the physical structure of the federal courthouse, and the uniformed personnel whose job is to protect that courthouse. They throw homemade Molotov cocktails, try to set the walls on fire, try to cut and pry through the plywood covering the glass walls, all the while screaming vitriol until their voices are cracked and hoarse. When DHS personnel are visible, they throw frozen water bottles at them, canned goods, paint and gasoline. They try to shine high powered lasers into our eyes, which can cause permanent damage. They chant and spray paint "feds go home" as one of their slogans, and that could be easily achieved. If they could prove they wouldn't destroy the courthouse, DHS personnel would go home. It is that simple.

The law enforcement officers involved are some of the nicest, friendliest people I have ever worked with. From several different agencies, they have come from around the country. Everyone is kind, generous, sharing food, giving each other rides home, and offering to host or show around each other in their home towns in the future. West Virginia, Idaho, Georgia, everyone is supportive, walks around with a smile and a pat on the back. Once they step out the doors of the courthouse, though, they are met with a hostile hatred from fellow citizens I consider unmatched in my life. I have seen mentally ill, frothing-at-the-mouth individuals screaming at people in front of liquor stores or Walmart parking lots, but that is one single, unhinged individual. Multiply that by 1,000 people, standing 10-20 yards in front of you, who also have rocks and other hidden weapons.

As the night goes on, the rioters become so hateful it is surreal. Their voices hoarse, their sentences jumbled, they seem almost catatonic with hate. The unrest seems to draw the mentally ill and drug abusers. Some seem to be both. The officers stand calmly, listening to it, taking it, only making a move if the rioters try to destroy the property or enter the area they have been told repeatedly not to enter. They [the agents] don't even respond to thrown projectiles, merely calmly dodging them. Some of the things screamed at us, ad nauseum:

"Go home! You're Nazis, racists, the Gestapo! Fuck you, fuck your mom, you suck! Quit your job and go fuck yourself! I'm going to get all your fucking names!"

We get more surreal things yelled at us. One guy kept repeating, "You shot my fucking dog!" over and over, but we have seen zero dogs anywhere at any point. One guy wanders down the skirmish line when things are more in control and says, "Why are you shooting at them? You don't need to. Their shields are made of cardboard. There's no threat. No one is armed..." And he repeats that night after night with a backpack full of wildflowers, which he places everywhere.

Much of it is contradictory. One rioter begged to be shot, begged, but then screamed that we were guilty of shooting people. He told us to lay down our weapons and join them, and then said he would kick all our asses.

The rioters would be overjoyed to get a non-lethal gunshot wound from DHS personnel. They would get to be the person who was shot by DHS during the Portland protests. They would be famous, and be the one who irreversibly turned the tide against DHS and the administration.

Regarding injuries to agents, I personally saw an agent get hit in the leg with a bottle and limp back from the skirmish line. I saw video of another agent hit similarly and limp back. One DHS law enforcement officer had irritant thrown on his arms, which turned them red and caused a burn. Another guy had a firework explode directly on his chest. The use of fireworks has increased every night.

There's no intel of actual firearms. We picked up unexploded aerosol cans taped to commercial-grade fireworks, so rudimentary IEDs [Improvised Explosive Devices] are a thing too.

It is a lose-lose situation. If federal law enforcement leaves, we lose face, but we walk away with stacks of overtime pay, and we get to go home.

Portland wins. They get to say they defeated Trump, and they will have caused tens of millions of monetary loss to their downtown local businesses, and will have ransacked and torched a courthouse in the heart of their city.