MISSION, Texas — Punchy Trumpian monikers and Washington, D.C.-style partisan controversy showed up right behind the non-profit known as "We Build the Wall" as it bulldozed its way into the Rio Grande Valley of south Texas this month to start its second project.

Busy orchestrating ground work on a new 3.5-mile section of 18-foot-high steel bollard wall in the Rio Grande floodplain on a private sugar cane farm, the group's most iconic character (among many), "Foreman Mike" Furey, seemed to take pleasure in colorfully referencing project opponents. There was "the butterfly lady up the street", the "rogue priest" who surveilled the work from a "fancy" private river boat, and other "freaks" running around with their "broken moral compasses".

Furey likes to see his mission, funded by crowd-sourcing, as occupying high ground, and so far more than half a million Americans have literally bought in.

"We're a voice and a construction arm of the American people," he told CIS at the new site in Texas. "This is not an immigration corridor. This is straight cartel, straight drugs ... drugs coming out, money going back ... boats coming over with long guns ... people riding back across the border. It's gotta stop now. It's going to change."

As thousands of tons of dirt moves in preparation for planting galvanized steel wall sections 18 feet high and four feet deep, legal injunction talk is ginning up among the "freaks" and "butterfly people" over perceived ordinance and environmental protection slights, Furey said. The group's pretty much defeated nemesis from its first completed wall project in New Mexico — the International Boundary and Water Commission — was reportedly rattling sabers again over the new Texas one. The bi-national U.S.-Mexico agency, whose chief is appointed by President Trump, has asserted a right to approve plans prior to installation of any wall section to ensure it does not hamper river flow.

There was simply no hiding news of a project of this scale by a group of self-described patriot-conservatives whose rough handling of opponents, social media machine, and willingness to push boundaries in New Mexico easily earned their status as a lightning-rod for anti-Trump liberal partisans.

Those anti-borders types better hurry because a central element of the We Build the Wall business model is to demonstrate how much faster and better than the federal government their planners and crews can convert the American people's desire for a border wall into reality. As I wrote in July after inspecting it, the half-mile, 18-foot-high Sunland Park, N.M., wall went up during a three-day holiday weekend for $8 million in donor money and then was unveiled to the world as a fait accompli, short-circuiting oppositionists.

This new one, estimated to cost $40 million, will take considerably longer than that to construct on the soil being tilled now, but is still scheduled to be done comparatively quickly, around mid-January. Just 27 miles to the east, the federal government has been able only to put up four or five panels over 17 months — maybe 1,000 feet — due to bureaucracy and assorted other issues, Furey said. Six miles to the west, the federal wall hasn't progressed much more. The 3.5-mile section here seems destined to stand alone for quite some time.

Brian Kolfage, a triple amputee Iraq War veteran and We Build the Wall founder said that until the section marries up with others slowly extended toward it, he's optimistic that opposition from "people tied to the butterflies", that "fringe element on the left wing easily triggered by anything Trump", will be unable to slow the group's roll toward planting it as an important, symbolic fact on the ground.

"We're following every rule, every law," he said. "This is on private property. You can't tell a guy you can't build a fence on his own land."

That guy is actually the local Neuhaus family. The industrial construction firm Fisher Industries bought the unused front slice of riverfront property from the family, which farms sugar cane on hundreds of acres behind it. We Build the Wall kicked in millions in donor money toward the project as a strategic partner, Kolfage said.

The family's eldest son, 22-year-old Clayton Wayne Neuhaus, called the project a "pretty sweet deal on both sides". That's because the threat from constant drug running through the farm at night has always forced them to evacuate farm workers at dusk for their safety.

"Maybe one day we can work safely down there after dark," Neuhaus said. "Nighttime is when most of the influx of people happens. Hopefully, with this border wall, that won't ever happen."

Indeed, the first week of clearing operations were eventful. Construction workers told CIS they were working in the cabs of their earth-moving machines earlier that day when they saw a Mexican soldier spring along the beach on the Mexico side before disappearing into the brush. Then they heard two loud shots. Crews have found enough deflated rafts along the U.S. side to create a four-foot high stack for disposal. In the same week, authorities found the stabbed body of an unidentified man on the property line of neighboring land. One recent night, Border Patrol agents chased a drug runner in his vehicle straight through the construction site to a splash down in the river. 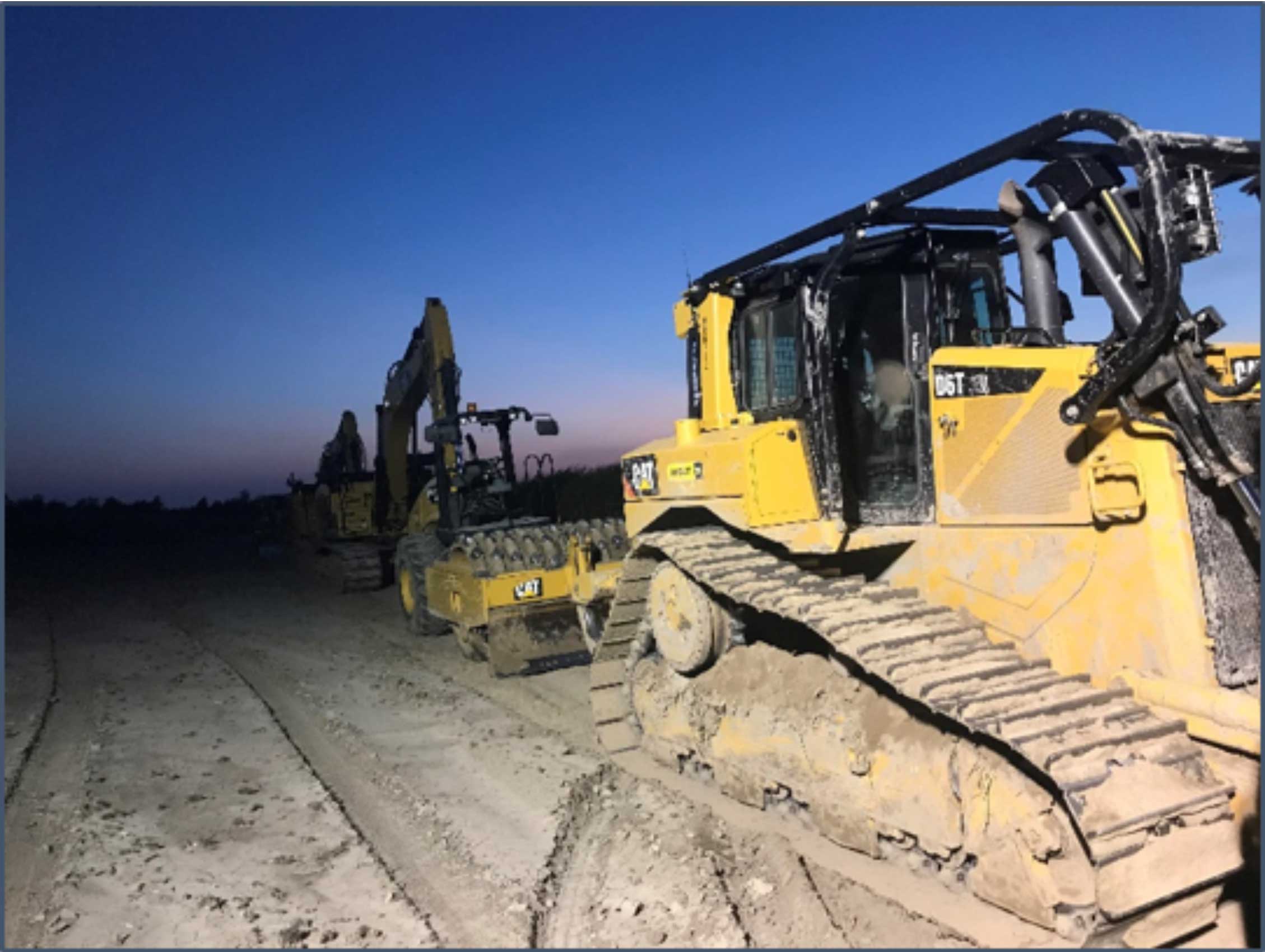 Earth moving equipment is parked under a night light under armed guard after a day's work at the new We Build the Wall site near Mission, Texas. Photo by Todd Bensman.

Beyond putting a forever end to that sort of nightly drama, Neuhaus said, another reason the deal worked for the family is that Fisher Industries and We Build the Wall figured out a way to put the fence within 70 feet of the Rio Grande on their property, right in the flood plain, instead of up to a half mile or more inside the property, which would have effectively removed that land from U.S. use and ceded it to Mexico in a way.

"There was very little cutting into the cane," he said. "We would really like to keep our land on our side of the fence, on American soil."

Kolfage and Furey said this wall will be built to withstand all flooding and also will accommodate the passage of small wildlife to and from the river, a Fisher Industries innovation.

"A small child's head would not fit through, but an ocelot will," Kolfage said.

Other ideas in development are doors that cattle can push through, but that are too heavy for people.

No cattle run on this Neuhaus land. Asked where cattle doors would be needed, Kolfage responded: for the other projects planned for Texas after this one is complete.