Update on the Crowd-Funded Border Wall in New Mexico 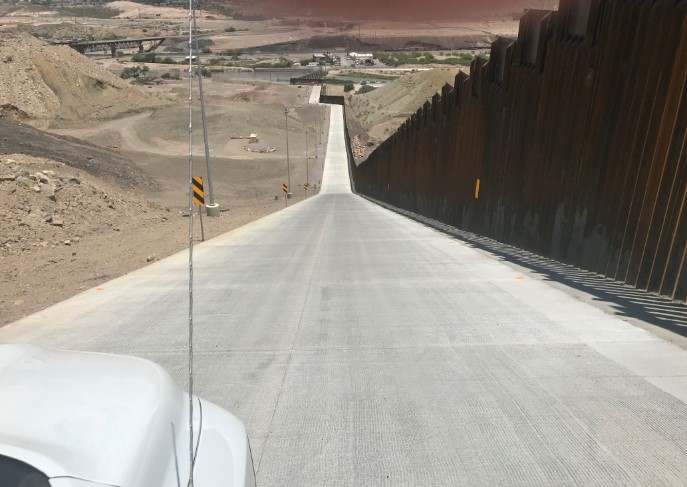 SUNLAND PARK, New Mexico – Depending on who’s talking, the half-mile long, 25-foot-high steel wall that seemed to go up suddenly on a mountainside here after Memorial Day is either an affront to proper democratic process and bureaucracy, or a magnificent edifice to a vast, unrequited patriotic will to protect America from the plagues of Mexican cartels and illegal immigration.

One doubtless reality is that the first and only crowd-funded border wall ever built – by a private group known as "We Build the Wall" in under a week at a cost of $8 million of at least $20 million in individual donations given online last December – is going nowhere in any hurry. It's towering 18-foot-high, concrete-filled, 100-year steel bollards are sunk seven-feet deep in underground concrete up the side of a privately owned mountain. The army of construction workers wore red, white, and blue hard-hats during 24-hour shifts and cheered their accomplishment before the dust settled. The 20-foot-wide cement road alongside the wall was dubbed "Deplorable Way" for the obvious political irony.

Notably, that motivated army of true believers still stands at the ready, and the fleet of massive earth-moving mining machines used on the original half-mile project remains gassed up and on site…also ready. For what, exactly?

The wall is being built where the borders of Mexico, New Mexico and Texas meet.

The partial answer, We Build the Wall operatives told me recently during a visit, is for much more wall construction as private money continues to flow in amid furtive negotiations with public and private landowners not only in West Texas but in New Mexico, Arizona, and California. 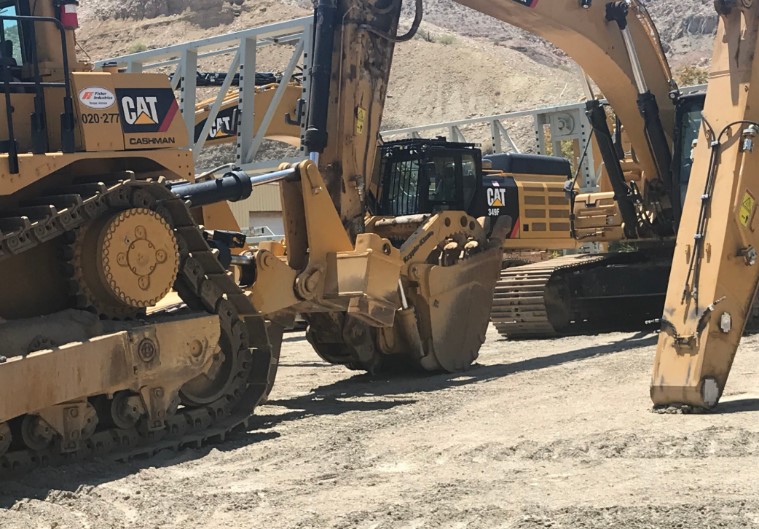 Heavy equipment on standby at the site, which We Build the Wall organizers proudly point out is all American made. Photo by Todd Bensman

"This is the first privately constructed border wall on the national border in U.S. history. That in and of itself is an amazing accomplishment, and it's not going to be the last," said Kris Kobach, a founding organizer, sitting board member and conservative Republican candidate for a U.S. Senate seat in Kansas. "We are gearing up on project numbers two and three."

What the We Build the Wall people wrought with their half-mile fence, aside from the claim that it cut off some 20 cartel smuggling pathways through a notorious gap in older federal fencing through this region, is a hard symbolic proof of concept. This has motivated American donors and workers, believing they know what is right for the nation, to defeat Washington's swamp, stalemate, and obstructionist "open-borders left" and show they can build a wall better, faster, and cheaper than can the federal government.

None of this is going away any time soon. Expect an odd mix of secrecy and noisy self-promotion.

On the immediate horizon is a "Symposium at the Wall" this Thursday through Saturday in Sunland Park at which a long succession of politically conservative notables will speak about cartels, trafficking and asylum. A senior White House official is expected to attend, unannounced so far, as will former senior Trump advisor Steve Bannon, who has been involved in the project since the beginning. 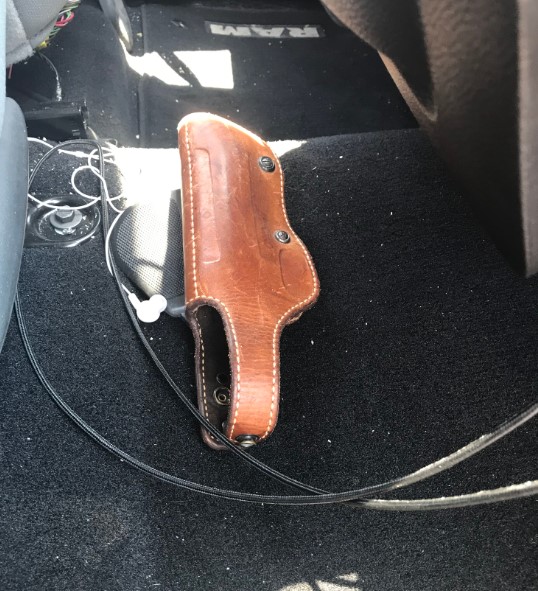 Most workers feel a need to be armed so close to Mexican cartel operatives, as this empty holster on the floorboard of a vehicle attests.

To much criticism, We Build The Wall activists accomplished their initial wall portion under a cloak of secrecy, swiftly enacting unwrapped construction plans on a holiday weekend and unveiling a finished product to the world's press, city officials and federal agencies as a fait accompli. They’ve been accused of deception, bullying, bending building codes, etc.; the owner of the former brick factory land where it stands adjoining the Mexican border, Geroge Cudahy, was accused of building without a proper permit.

But Mr. Kobach and his cohorts are all defiantly unapologetic. He said operational secrecy was, and still is, necessary to preempt the almost certain lawfare and bureaucratic obstructionism that has bedeviled President Donald Trump's most ambitious wall-construction plans, and that quietude also short-circuited extremist political activists, who would engage in civil disobedience and illegal sabotage.

Secrecy won't be easily repeated now that leftist wall enemies in both government and civilian society are on the alert, he conceded. That's why Mr. Kobach and other group leaders aren't talking much about what's next. Why make obstruction easy?

"We will similarly begin building without announcing beforehand where we will begin building or when,: he said. "There are a lot of people on the left who are unhappy."

Leaning In With American Pocketbook Support But Also Disputes, Controversy

A significant segment of the American population responded late last year in ways that indisputably indicate its sentiment: with cold hard cash. In just the month of December 2018, when a privately-funded wall was merely a whiff of an idea, some 500,000 Americans still reportedly poured $20 million into the initial campaign. Sympathizers are still showing love for the private wall idea; money continues to roll in, Mr. Kobach said, though not at the initial heady rate. Donors get to have their names engraved into bricks, panels, and individual steel bollards, depending on the generosity level of the donation.

That means there is plenty of money behind the effort to keep this endeavor going for a long time to come.

But make no mistake, controversy is going to dog the private wall builders, even though they've taken on legal brainpower as well. They can bring political power to bear if necessary, and they have a social media machine that has proven effective in getting them over hurdles, such as when the local town's officials tried to block construction and relented after a torrent of public online outcry.

One heated dispute that may require creativity beyond social media involves a land dispute between We Build The Wall and the International Boundaries and Water Commission (IBWC). 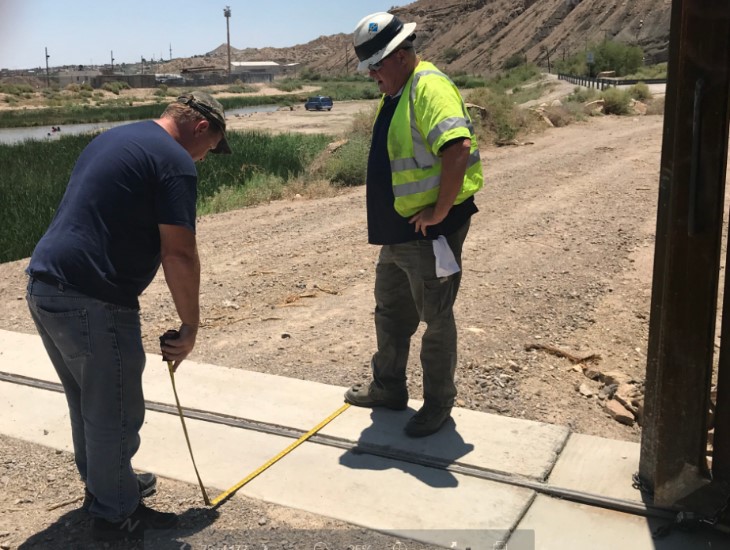 Foreman Mike Furey (wearing yellow) and a worker measure the disputed gate for an unknown purpose related to the dispute. Photo by Todd Bensman

The IBWC is a little-known bilateral entity that oversees water- and land-related treaty obligations between the United States and Mexico. It controls access to dams along the Rio Grande, roadways, and gates of various kinds from San Diego to Brownsville. Cartel contraband smugglers have been known to use these roads and access points to move drugs and people too. But since the private wall went up, a tiny 320-square foot slice of land has come to be seen as the one critical chink in the armor.

The problem is the IBWC says the private wall builders extended their wall right across its road access to a dam on the Rio Grande and the road to the spillway side, where Mexicans fish, swim—and smuggle. On the 320 square feet, the wall people, in their rush to erect the structure before anyone really noticed, took the liberty of building a huge steel-bollard gate. They want the gate closed and locked because it shuts off that one last opening from smugglers, who instead of taking the easy levee road would be forced to circumvent the wall by climbing over Mount Cristo Rey, a formidable mountain.

Conversely, the IBWC has claimed sovereignty over the road and says it needs it kept open for various reasons, including an ability to rescue Mexicans who might be drowning and for maintenance. At one point, IBWC officials cut the lock on the gate and opened it, enraging the wall people.

Mike Furey, known as "Foreman Mike", explained that the gate must remain shut because keeping it open negates the wall's fundamental effectiveness and becomes an escape hatch for smugglers.

At present, a tentative but unsatisfying détente has been reached whereby the IBWC allows it to be open during the day but locked at night. Border Patrol agents often have to be stationed there by day as a result. That;s not good enough, though.

He and others are growing increasingly frustrated and talk of unspecified measures to get their way.

"One way or another, it's going to be closed," Mr Furey said. "It’s going to locked, for good."

Mr. Kobach was a bit more diplomatic, blaming one "mid-level bureaucrat" for the trouble. President Trump, who appointed the entity's U.S. Commissioner, has yet to get overtly involved.

"We expect that we will eventually prevail in this dispute," Kobach said. "We anticipate getting the gate closed in a much more effective manner." Asked how, he added, without elaboration, that "we will keep all options on the table." 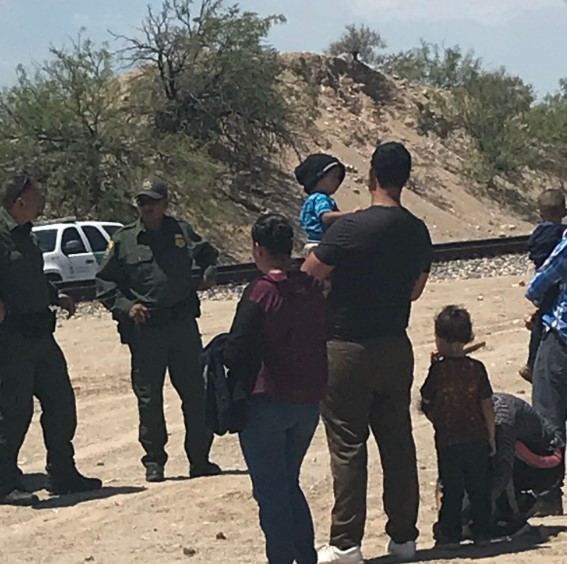 The private wall people insist the structure has blocked a heavily trammeled smuggling byway through the El Paso area. They base this claim on extensive conversations with area Border Patrol and law enforcement long familiar with the area and also on personal, often videotaped observations of smuggling activities before and during construction.

A U.S. Customs and Border Protection spokesperson would not comment.

"We normally don't put out information about trends in specific areas like that," said Agent Fidel O. Baca of the El Paso Sector's Strategic Communications Branch.

Some Border Patrol agents privately agreed that the wall cut deeply into a smuggling route and made life more difficult for the cartels.

Mr. Furey, for instance, said 21 different smuggling paths were cut at the wall. Where it ends, three-quarters of the way up Mount Cristo Rey for another two miles down the other side, remain open terrain that obviously a busy trafficking corridor. Driving me on a tour of this open section, Mr. Furey spotted a family of Guatemalan migrants walking along a railroad track.

He pulled over and rolled the passenger side window down. In Spanish, he told them all to wait for Border Patrol, whom he had already called on his cell phone. That's a call Mr. Furey has had to make many times.

A few minutes later, Border Patrol pulled up and took custody of the migrants.

Proof, he told me, of the need to close these gaps.