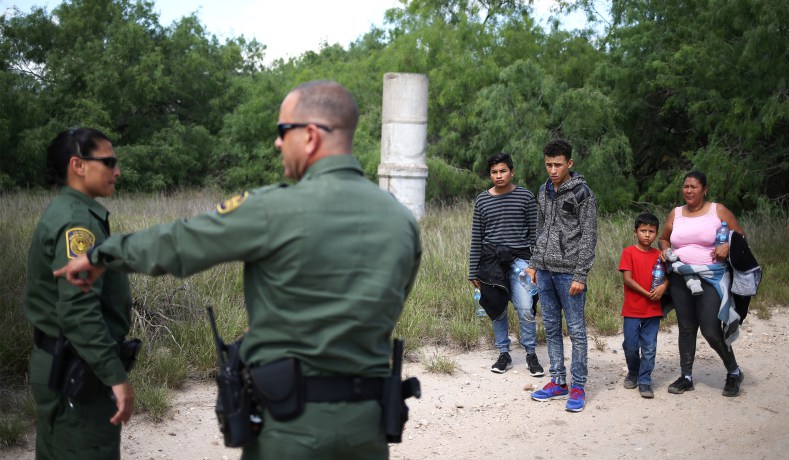 In quiet acknowledgement that significant numbers of Covid-infected patients are crossing from Mexico and boosting infection and hospitalization rates in border states, the Trump White House and U.S. Customs and Border Protection (CBP) have mounted two major initiatives to staunch Mexico's export of the disease.

The first started Thursday with no fanfare or public announcement. CBP began a surge operation along the Texas border to catch and remove far more illegal immigrants crossing who are infected with Covid-19 from reaching the nation's interior, two knowledgeable agency sources confirmed to the Center for Immigration Studies. One CBP official said re-deployments of more than 400 and possibly as many as 1,000 CBP agents from the nation's interior would be committed to apprehending illegal migrants who would otherwise evade Border Patrol — known as "got-aways" in Border Patrol parlance — for the purpose of catching and returning to Mexico those who otherwise would go on to infect interior Latino populations.

While cyclical redeployment surge operations are not unusual in normal times, this one is very much so in that its main intent, according to a second CBP official, is to "mitigate public health impacts on the American public amid the ongoing global pandemic" and to counter "the Covid-19 public health risk posed if these illegal entry attempts continue unabated."

The operation will involve two 30-day deployments in two south Texas Border Patrol sectors, Laredo and Rio Grande Valley, where hospitals have been overwhelmed with seriously ill Covid patients since June. Immediately across the Rio Grande from Texas cities in those sectors (including Brownsville, McAllen, and Laredo), hospitals in the Mexican cities of Matamoros, Reynosa, and Nuevo Laredo have all but collapsed at the same time under the crush of Mexican Covid patients. The hospital bed crisis in Texas has forced those facilities along the border to ship patients by fixed-wing aircraft as far away as Amarillo and Dallas and by fleets of ambulances to facilities in Houston, San Antonio and to rural community hospitals across the large state.

The new CBP operation confirms a phenomenon that senior government officials, the media, and pandemic experts have studiously avoided addressing publicly for weeks about sharp Covid spikes in border states like Texas: that significant numbers of illegal immigrants crossing to work in the country's black market economy are sick with Covid-19. Border Patrol agents have taken some seriously sick Mexican illegal migrants to area hospitals but, for the most part, have returned about 90 percent of those apprehended under the emergency health provision known as "Title 42."

On August 6, Acting CBP Commissioner Mark Morgan foreshadowed the operation at a press conference in comments that went largely unreported.

Morgan indicated that infected illegal migrants (among a current escalation in apprehensions that reached 40,000 just in July) were using evasion tactics "for their own economic endeavors" and going on to infect large numbers of working illegal migrants inside the United States. The migrants were working hard to evade Border Patrol so as not to be immediately returned to Mexico under the emergency Title 42 provision now in force.

"They're running. They're fighting. They're doing everything that they can to avoid apprehension," Morgan told reporters. "Even though some of the illegal aliens know, or highly suspect, that they have Covid . . . they're still coming. They're exposing everyone they come in contact with during their journey, as they illegally try to enter this country."

In doing so, Morgan continued, "they endanger the lives of CBP personnel and their families and those in our border communities and beyond. They don't just remain in the border towns and cities. A single Covid illegal alien could infect hundreds of other illegal aliens as well as our workforce."

Morgan said 10 CBP personnel had died so far "in the line of duty because of Covid."

It remains unclear why the Trump administration did not announce the operation or its purpose. A CBP spokesperson declined to confirm or deny that a surge operation to catch and return more Covid-infected illegal immigrants had gotten underway.

Also this week, a White House memo leaked to The New York Times revealed that President Trump was seriously considering revisions to his exemption-riddled March 20 border closure with Mexico to stem another Covid tide from Mexico that has contributed to hospitalization spikes in California, Arizona, and Texas.

Acting Commissioner Morgan confirmed in his August 6 press conference that some sick illegal immigrants are fleeing Mexico's hospitals and reaching American ones. But an accumulation of evidence — in media reporting, state hospitalization data, and public statements by hospital administrators, doctors, nurses, and patients — shows that probably many more ill Mexicans with permanent legal residence in the United States, dual citizenship, border-crossing cards and other visas, as well as American expatriates, have been fleeing to American hospitals since at least mid-May (including in Texas's Rio Grande Valley). The administration, as well as major media outlets and local public officials and governors, have shied away from discussing the phenomenon at all, probably because those who have, such as Arizona Gov. Doug Ducey, immediately were subjected to racism accusations for doing so.

Referencing the severity of Mexico's Covid outbreak, the Trump draft proposal would allow border inspections agents to temporarily bar Mexican legal residents of the United States and U.S. citizens living in Mexico if an official "reasonably believes that the individual either may have been exposed to or is infected with the communicable disease." The prohibitions would apply "when required in the interest of public health," the memo explained.

In reporting about the memo and in all of its coverage about the latest Covid surges in border cities, the Times did not mention its own coverage in June establishing that large unknown numbers of American expatriates, Mexican legal permanent residents, and visa-holders were crossing the California and Arizona borders and overwhelming the hospitals in those states.