Despite Title 42, thousands fill buses and planes headed for the interior 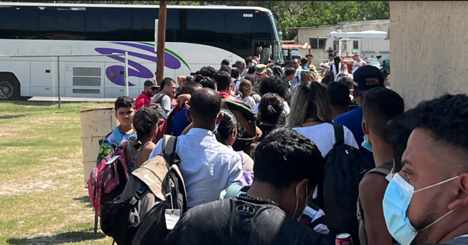 DEL RIO, Texas — When the time came to finally board the idling charter bus, a Cuban named George who illegally swam the Rio Grande two days earlier ran to be first in line and start his new “forever” life inside America. George staked his claim as some 200 other illegal border-crossers, many still carrying their belongings in plastic detention center bags, formed behind him three and four abreast in a line stretching half a football field long.

Border Patrol had just dropped them all off at the Val Verde Border Humanitarian Coalition (VVBHC), a non-profit immigrant assistance organization of volunteers arranging the bus and air transportation that has shipped thousands of illegal border-crossers like George from Del Rio toward cities across America. Not even the scalding sun overhead could dampen George’s ebullience or of those behind him who giggled, smiled, and took selfies with a Greyhound bus as a backdrop.

Asked if he was feeling happy to start this last leg of what had been a long journey, George responded in broken English and with a firm thumbs up, “Yes, very happy, man ... because I am in freedom now. Viva de libertad!”

Not so long ago, Border Patrol would have expelled George and many of the single adults queued behind him back to Mexico under the pandemic-related “Title 42” rapid expulsion policy that President Joe Biden’s DHS just tried to retire. Now, he’ll move in with his sister in Florida. Asked if he thought America would let him stay in the country forever, George nodded with certainty and a tight-lipped knowing smile: “Yeah, forever. Because it’s a very good country, man ... really.” 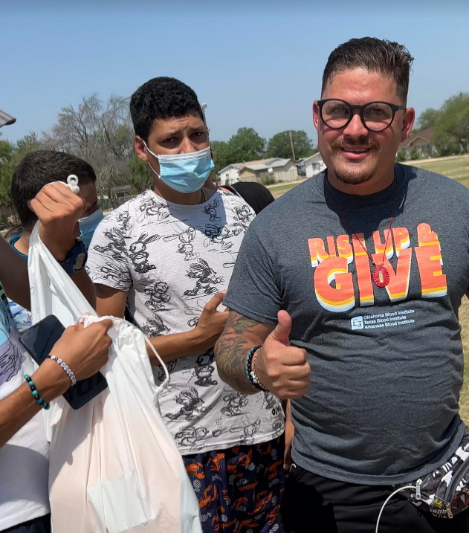 "George" of Cuba in line to take a bus from Del Rio to his sister's house in Florida. America, he predicted, is going to let him stay "forever." Photo by Todd Bensman, May 27, 2022.

On May 20, a Louisiana federal judge ruled that the Biden administration can’t kill the Title 42 expulsions, which also deny access to the U.S. asylum system, and must for now continue expelling border-crossing aliens. But that ruling appears to be proving no imposition at all for escalating numbers of them. A roaring, expanding conveyor belt of buses and airplanes is hauling thousands of previously expellable crossers like George into American cities, out of ear shot or sight of the American public.

The Center for Immigration Studies (CIS) recently witnessed the conveyor belt in action during a visit to the Border Patrol’s Del Rio Sector, one of nine along the southern border where Title 42 expulsions are still supposed to be happening, and some still are.

But CIS recently observed seven-days-per-week bus and plane transports into America’s interior from the Del Rio Sector and learned that these operations are not only spiking, but likely evidence of a border-wide development. The likely culprit is that, in Del Rio Sector and likely other busier Texas Border Patrol sectors, single adult aliens and families from South America, Asia, Africa, and the Middle East came in greater numbers on news that Title 42 would be ended, and then discovered the Biden administration was exempting them from the expulsion policy in any case.

For quick background, upon taking the reins of government on January 20, 2021, Biden’s White House immediately opened Title 42 exemptions to hundreds of thousands of mostly family groups with very young children across from the Mexican state of Tamaulipas, as well as unaccompanied minors and pregnant or postpartum women along the entire border. These Title 42 cut-outs set off the most voluminous mass immigration border crisis in American history, even though Title 42 was technically still in place pushing back single adults and families with older children. But that selective breakdown seems to have given way to something very new and different.

Now, Biden’s DHS appears to have extended the free-pass treatment to huge numbers of so-called “extra-continentals” from outside the hemisphere, and also from South America and the Caribbean, since Mexico recently decided not to accept American expulsions of them. The story goes that Mexico felt unable to easily or cheaply deport these immigrants to more distant, recalcitrant, troubled countries like Nicaragua, Venezuela, Cuba, Colombia, Ecuador, and Brazil, plus all the countries of Africa, Asia, and the Middle East. For example, the administration is giving free passage to significant numbers of a new nationality that has discovered the loophole, about 500 Peruvians a week, a senior Border Patrol official told CIS on background. Peru recently elected a communist government and is experiencing food riots. 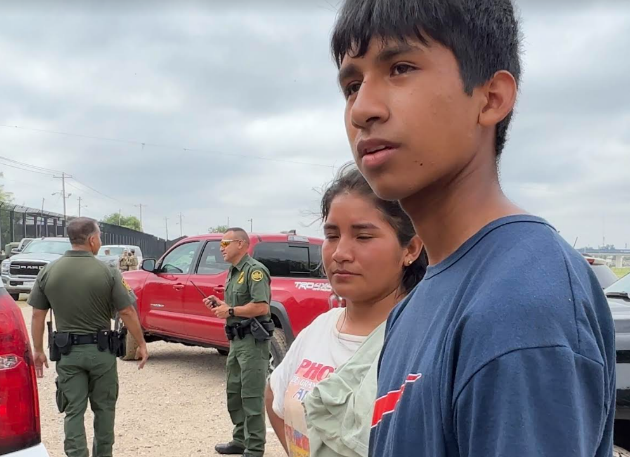 Peruvian siblings who crossed illegally and turned themselves in at Eagle Pass, Texas. Photo by Todd Bensman, May 27, 2022.

DHS is permitting so many to stay that chartered bus services in Del Rio, as well as American Airlines planes at the nearby Del Rio International Airport, now move them into America for hours on end seven days per week.

Burrow said Border Patrol brought to her group 5,028 illegal border-jumpers from 33 different countries in March, the most in her organization’s history for a single month. The nonprofit helped transport another 9,000 into the country in April and May.

During all of calendar year 2021, the VVBHC helped transport an organizational record of 22,317 into interior America, Burrow said. For just the first five months of 2022, the group has already helped transport some 15,000, which portends another far bigger record of close to 40,000 for 2022 if that rate holds.

A time lag in one source of reporting — court filings related to a Texas and Missouri lawsuit against the administration — prevents the public from knowing how many the administration has released into the interior since the May 20 thwarting of DHS’s plan to scuttle Title 42 expulsions.

The Del Rio Sector’s contribution to the total numbers released inside the United States is relatively small but also telling, like a canary in a coal mine. The administration released more than 1.1 million border-crossers to all four corners of the United States in the 13 months through February 2022, according to earlier DHS filings in the federal lawsuit.

One other data indicator supports the idea that the announcement of Title 42’s retirement sparked a major surge on the border. Border Patrol apprehensions spiked from 147,820 in January and 159,060 in February before the announcement, to 210,749 in March and another 201,800 in April.

It would seem, based on apprehensions and Burrow’s spiking numbers in the Del Rio example, that the rate of illegal immigrant releases will move sharply skyward even with Title 42 nominally in place. The exemptions have punched it too full of holes to hold water.

Burrow is bracing. She said the numbers have prompted American Airlines to triple its capacity at the Del Rio airport starting the first week of June. The airline will use much bigger aircraft than the 80-seater American Eagle craft, she said and flight tracking data shows.

“A lot of people are flying out,” she said.

A Dance of Buses 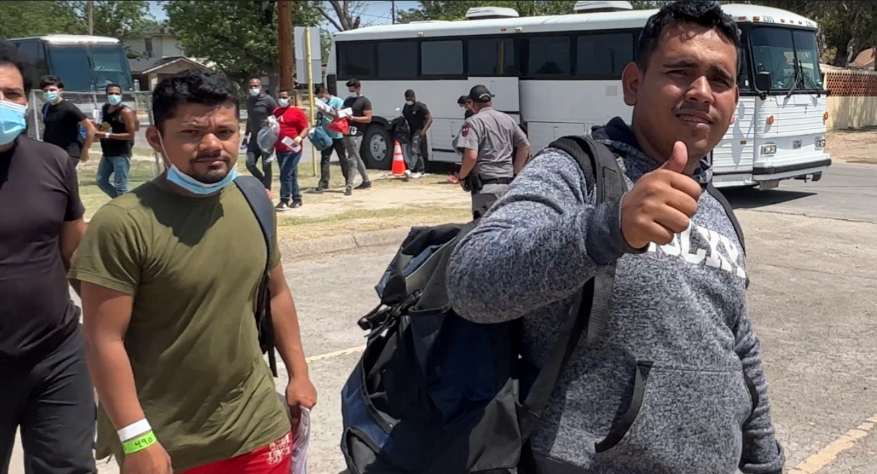 Illegal border-crossers released from a white Border Patrol bus coming after a brief processing detention in Del Rio, Texas. A non-profit organization will sell them tickets on a chartered bus shortly and they’ll be on their way before day’s end. Photo by Todd Bensman, May 27, 2022.

The incoming and outgoing buses dance like this in the parking lot for hours every day, Title 42 apparently posing no obstacle whatsoever for the lucky beneficiary groups. During recent visits to the nonprofit’s operations, CIS observed mostly Cubans, Nicaraguans, Venezuelans, and Peruvians. Some Cubans and Nicaraguans told CIS they came initially to exploit the end of Title 42 but found the Americans were letting them in anyway.

Single adult Nicaraguans like Bismark Antonio Robles Gonzales, who a short time ago might have been pushed back into Mexico, are now showing up in very significant numbers. CIS found Gonzales with five other single Nicaraguan young men detained in Eagle Pass carrying Mexican residency cards that indicated they had recently gotten Mexican protective status, proof of Covid-19 vaccines, and original identification cards.

He said they left after learning the Americans had just started granting all Nicaraguans free passage if they crossed illegally. How?

“I heard it on the news,” he said. “One of the reports I heard on the news was that Joe Biden was going to permit all Latin people to come in.”

One of the other five Nicaraguans said they came for the end of Title 42 and knew a judge kept Title 42 in place, but also that its fate did not matter to them.

“It is not necessary to wait,” he said, because the Americans are letting single Nicaraguans stay in the United States to claim asylum.

The assembly line usually works like this: Illegal aliens who learn their countries are on the we’re-letting-them-in list cross and present themselves to Border Patrol agents, knowing what comes next.

These nationalities are taken to expanded Border Patrol facilities, where they sign papers paroling them into the country on a promise that they will check in with Immigration and Customs Enforcement later.

Next, Border Patrol contract drivers drop them off at non-profits such as the Val Verde Humanitarian Border Coalition, which has arranged for Greyhound or private charter bus companies to come pick them up and drive them to catch other planes or buses in San Antonio or Dallas to their final destinations. The aliens pay the bus fare to the transportation companies. The VVHBC arranges for a third party to conduct Covid testing inside and provides power for phone chargers, food, facilities to clean up, and packets of information in manila envelopes.

After a couple of hours, they are ready to line up at the buses VVHBC has arranged in advance. 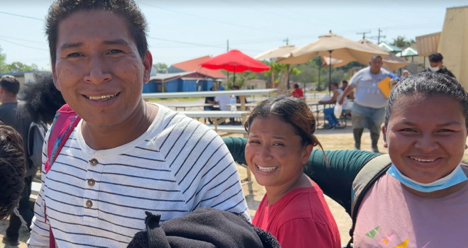 Nicaraguans happy that the Biden administration is letting them in to America after illegally crossing the southern border in the Del Rio Sector of Texas. Waiting in line to board a charter bus. Photo by Todd Bensman, May 27, 2022.

CIS examined some of the government-issued papers. These show DHS is releasing these aliens on a controversial honor-system of parole: Alternative to Detention enrollments giving them a year to report in to U.S. immigration. This provision is controversial because DHS is required under law to detain all immigrants apprehended entering the country illegally, from the time they are seized until they are granted immigration status or removed.

Instead, a “How to Report” sheet directs them to an ICE website where they should make an appointment and then probably end up with an electronic monitoring device. Those who go through with this will likely claim U.S. asylum at some point, where cases are backlogged for five years and those denied can easily go underground to avoid deportation for years.

While the Biden Title 42 exemptions create many happy winners, they also makes for some sour losers. On the Mexican side of the Del Rio Sector, in the town of Piedras Negras, some 3,000 Hondurans and Guatemalans roam as single adults and families with children.

They are the left-behind, since the administration still targets them for Title 42 returns while allowing most everyone else around them through.

Recently, CIS observed and interviewed dozens of Hondurans roaming the central plaza and waiting for a church to open its doors for the evening and provide food and other services. All of the Hondurans had permanent Mexican humanitarian residence cards, which entitled them to live and work in Mexico.

But card-holders like Yesenta Yamlleth Garcia Gomez said they only saw them as a means to get to the American border so they could cross it. Those still in Piedras Negras were there because the Americans had expelled them anywhere from one to six times already.

They were furious at seeing all the other nationalities gain quick acceptance.

Back at the VVHBC, those exiting Border Patrol buses smiled and waved or gave the thumbs up. It was the same for everyone loading up on the charter buses. Of course, they would feel this way. The thousands of dollars each invested in smuggling fees had paid off after their illegal border crossings were followed by swift release under Biden administration policy and permission to go anywhere in America they wanted.