A stadium with 10 entrances, nine of which aren’t guarded 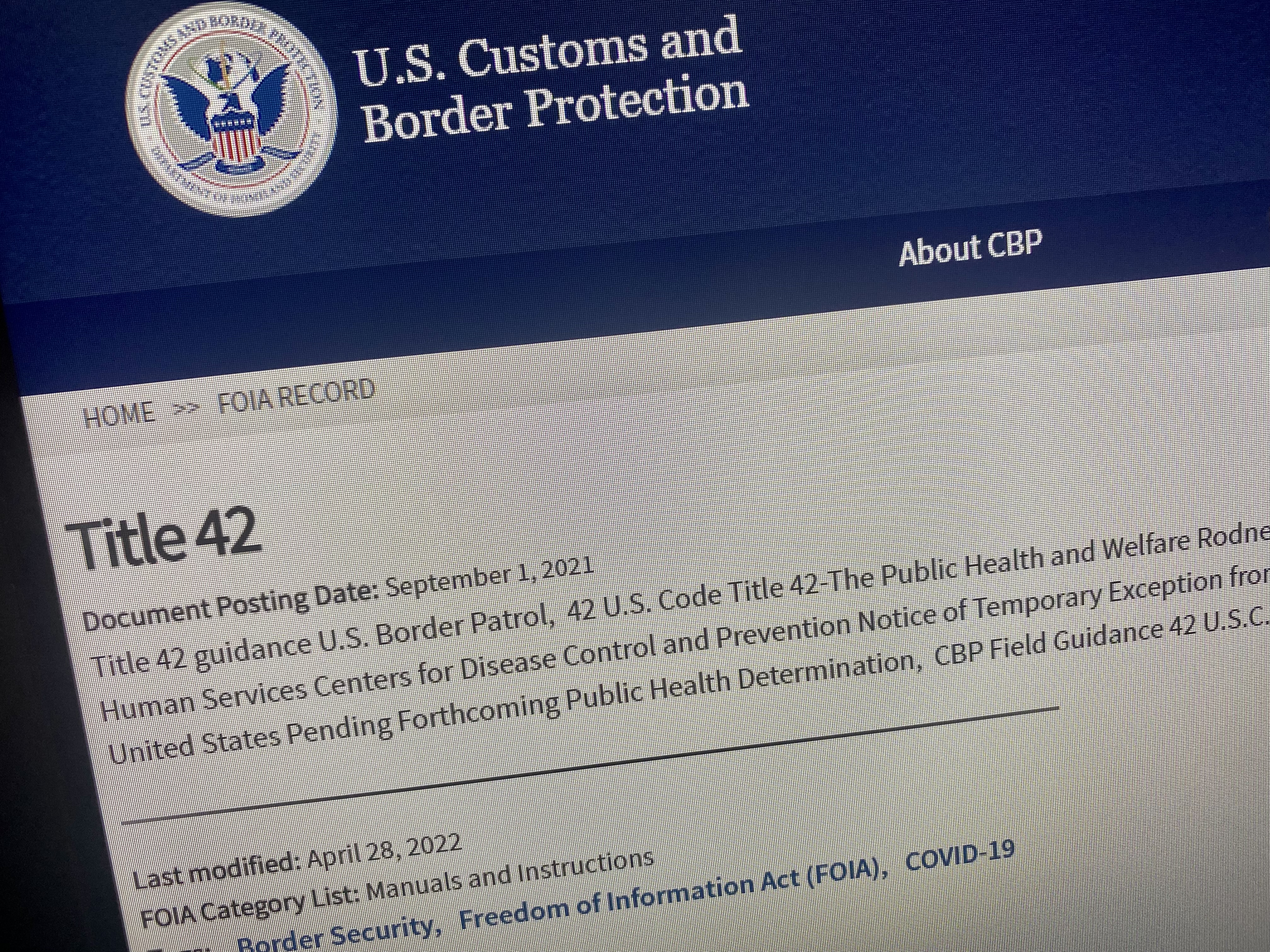 Though 60 percent of Americans are worried about illegal migration, I’m not sure many understand how bad the situation at the Southwest border is, and how much worse it will get when CDC orders issued pursuant to Title 42 of the U.S. Code directing the quick expulsion of illegal migrants in response to the Covid-19 pandemic expire. Analogizing the border to the entrances to a stadium may put it into context, but first some background.

The Pre-Biden Situation at the Southwest Border. Illegal immigration plummeted directly after Donald Trump became president, likely due to a “Trump effect”, resulting from the 45th president’s rhetoric that dissuaded many would-be illicit entrants. For example, in December 2016, Border Patrol apprehended more than 43,250 illegal migrants, a number that dropped to just over 11,125 apprehensions three months after Trump took office, in April 2017.

Apprehensions at the Southwest border ticked up within a few months as would-be illegal migrants (and more importantly smugglers) realized that Trump’s words meant nothing without congressional action to plug the loopholes aliens had begun exploiting in the recent past.

By that point, the Trump administration had begun planning policies to address this surge. One example is the Migrant Protection Protocols (MPP), better known as “Remain in Mexico”, which Nielsen set in motion in January 2019.

MPP allowed DHS to return “other than Mexican” migrants caught entering illegally or without proper documents back to Mexico — where the Mexican government agreed to provide them with protection for the duration of their stays — to await removal hearings. They were then paroled into the United States long enough to apply for asylum.

MPP was quickly enjoined, and months passed before Remain in Mexico was fully implemented. There were nearly 133,000 Southwest border apprehensions in May 2019, prior to MPP really kicking in. Once it did kick in, however, it was successful, and by September apprehensions dropped 70 percent to just over 40,500.

In its October 2019 assessment of the program, DHS determined that MPP was “an indispensable tool in addressing the ongoing crisis at the southern border and restoring integrity to the immigration system”, particularly as related to alien migrant families. Asylum cases were expedited under the program, and MPP removed incentives for aliens to make weak or bogus claims when apprehended.

The Biden Administration Dismantles Border Security. Despite its success, Biden was opposed to MPP, and shortly after he took office, he suspended the program. Thereafter, his DHS secretary, Alejandro Mayorkas, twice attempted to terminate Remain in Mexico.

Mayorkas’ attempts to terminate MPP have themselves been subject to injunction in federal court, in Texas v. Biden. On April 26, the Supreme Court heard oral arguments in DOJ’s appeal of that injunction, with a decision expected in late June.

Despite that injunction, Biden’s implementation of MPP has mostly been for show: Whereas the Trump administration returned 300 to 400 illegal migrants per day to Mexico, last month, as CBP encountered more than 221,000 illegal migrants at the Southwest border, just 199 of them were returned to Mexico — a return rate of less than .09 percent, compared to 6.5 percent under Trump.

Consequently, the situation at the Southwest border has devolved from what had been, in the words of former Border Patrol Chief Rodney Scott, “arguably the most effective border security in” U.S. history under Trump to utter chaos.

Things Will Get Much Worse Post-Title 42. As bad as things at the Southwest border are at the moment, even Mayorkas admits that they will get much worse once CDC lifts its Title 42 order.

Even in FY 2021, when agents apprehended more illegal migrants at the Southwest border than in any prior year in history, daily average apprehensions were “just” 4,546 — roughly a quarter of the number of daily apprehensions DHS is expecting when Title 42 ends.

For the moment, a federal district court judge has issued a temporary restraining order blocking the end of Title 42 in response to a suit filed by 15 states who are concerned that this onslaught will overwhelm their municipal capacities and fiscal coffers. It is not clear, however, whether the court will enjoin Title 42’s termination before it is scheduled to end on May 23.

According to my sources, DHS anticipates that 90 percent or more of its fewer than 17,000 Border Patrol agents at the Southwest border will be taken “off the line” to process, transport, house, and care for those migrants (currently more than half of the agents are off the line in certain sectors).

That means that those agents will not be there to stop the drugs, contraband, and other aliens who don’t want to be caught coming over the U.S.-Mexico line.

The Border as Gates to a Stadium. To put this into context, consider a sports stadium that has 10 gates for admission.

Safety and order are at a premium in such places, so most arenas have barriers to channel entrants toward the gates, where fans first go through a magnetometer to ensure that they are not carrying weapons or other contraband. If there are any concerns on the part of management, those seeking admission are then subject to personal searches to ensure that they are not carrying drugs, alcohol, or contraband.

Imagine what would happen at a game where all 10 gates were open, but screeners were only manning one. Some attendees would go to the one manned gate to comply with management, but others would simply walk right in. Many, even some without tickets, would simply be there to see the game, but they would be vying for seats with their rightful owners.

Others, however, would not be so benign. More than a few fans enjoy alcohol while watching sports, but the prices for beer and cocktails at sporting events are well above cost; management has a captive audience, and the difference is pure profit. It would be much cheaper to bring your own, and without servers cutting off intoxicated patrons, drink as much as you want and share (or sell) the rest.

There are already some who bring marijuana to games, but if there were no screening, their numbers would surge. The pungent odor of pakalolo would fill the increasingly hazy air. Other drugs that carry heavier sentences would be brought in as well, some by users, some by “unlicensed pharmacists” seeking a profit themselves.

Violence would inevitably follow, as some patrons would be trampled on the way in, and others would come armed. Sports have an intoxicating effect, and once you add in other intoxicants, altercations are common. Imagine the scene when the intoxicants are free-flowing, especially if patrons are vying for seats. As unlikely as all of this sounds, something similar occurred eight years ago in Baltimore.

And want to protect the drug stash that you intend to use or sell? Better come armed.

If opening nine out of ten gates for unscreened entry were a one-off and surprise event, things likely would not be that bad. But if would-be attendees had, say a month’s notice, however, all those interested in free entry (or worse) would be waiting for the date. Have drugs to sell and looking for a crowd to sell them to? I have 70,000 people in one spot, and there are bound to be willing takers.

In fact, you could set up a whole syndicate to sell them for you inside. You carry the drugs in, and others will pursue the transactions. And if you were looking to do harm to a large group of people in pursuit of some misguided cause, they are all gathered in one spot. Bring any weapon or explosive you want — just make sure to avoid the unmanned gate.

Then imagine that this “one-manned gate” scenario were to continue for the entire season. Again, tickets are expensive, and plenty of people just want to catch a game. Sports are a big part of the American dream, as any SEC fan will tell you. Many, many more people will come.

Take it one step further and imagine that the stadium security folks — who maintain order inside — are now pulled to help at the one manned gate. The other gates will devolve into chaos, and inside will be pure bedlam. Refs will control the action on the field, but there won’t be refs in the stands.

That is, at best, an imperfect and overly simplistic analogy for what will happen — not may but will — once Title 42 ends. When 90 percent of Border Patrol agents aren’t actually securing the border, the United States — like the theoretical stadium — is wide open. Migrants, drugs, weapons, and contraband that I cannot even envision will flow in.

Some of those migrants, like some of the un-ticketed fans, will simply be coming to better their condition. There are those, however — criminals and terrorists to name two — who are barred from legal entry to the United States. There will be no barriers to their entry when there are no agents to stop them.

Still Not a Perfect Analogy, Because the Border Is Worse. One of the reasons that the stadium analogy is inapt is that arenas by their nature are enclosed. Once those migrants, drugs, criminals, weapons, etc. cross the border, they will flow into and eventually flood the United States.

More than 100,000 overdose deaths in a year (as in 2021) is unacceptable, but you had better be ready to accept it, and worse, because it is coming to affect a town — and possibly a family member — near you. And while most alien terrorists in the past have entered legally (though fraudulently), now there will be no reason for that; they can skip the line and come right over the border. Hope their violence passes you by, at least the direct effects of their violence.

And if somebody takes your seat for a game, you will live. When you (or your child) has to wait hours for treatment at the local emergency room, however, the odds are not so good, but you will be dealing with that, as well — that is where most illegal migrants go for even basic medical treatment.

Although, for what it’s worth, Mayorkas has confirmed that DHS has spoken to the Department of Veterans Affairs (VA) about using VA medical resources — including doctors and nurses — to treat migrants at the Southwest border.

Ask a vet waiting for an appointment at the local VA hospital what he or she thinks about that, but the VA is only supposed to be used to treat non-veterans in times of “war, terrorism, national emergencies, and natural disasters”. The border is a disaster, but it’s purely man-made.

Speaking of children, you pay for the ones at your local public schools and thus are already paying to educate some of the more than 157,000 unaccompanied alien children (UACs) who have been apprehended at the Southwest border since Biden took office.

Most have been (or will soon be) handed over to the Department of Health and Human Services to be placed with “sponsors” (mostly their own parents or close family members) in the United States. Expect tens, hundreds, or thousands more to be added to your tab and enrolled into your local classrooms.

I could go on, but if you have not gotten the point by now, you likely won’t.

Most of you have been to a stadium, but few have been to the Southwest border. Trust me — it is bad, and about to get worse as some 18,000 illegal migrants are expected to flood over the border daily once Title 42 ends. You won’t have to venture to the border to see the crime, drugs, and violence that will follow, or even those migrants themselves — they’re all coming to your town, soon.