A shortage of miners in Newcastle 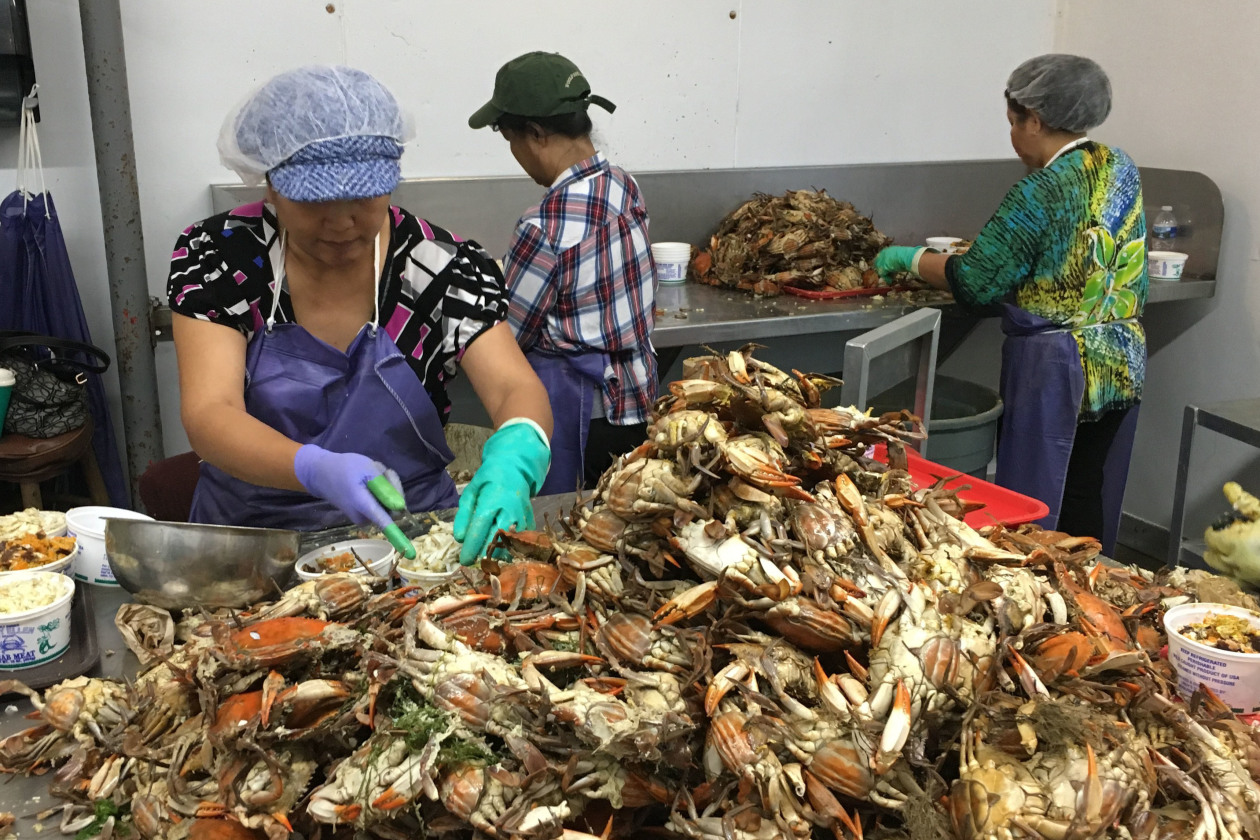 On May 11, 2018, the Wall Street Journal reported that licensed crab processors on Maryland's Eastern Shore will be short 200 workers this year, which the paper attributes to the recent allocation of nonimmigrant H-2B visas. That there is a shortage of crab pickers in Maryland is somewhat surprising to a native Free Stater, like myself.

As the paper explained:

This year, for the first time, demand for the low-skilled, seasonal H-2B visas was so high that the U.S. government awarded them by lottery. The result is uncertainty for businesses such as crab processors in this remote corner of Maryland's Eastern Shore that have relied on the program for years.

The article focuses on two businesses in the remote corner in question, the town of Fishing Creek, which sits on a spit of land in the Chesapeake Bay. One business, G.W. Hall & Sons, the Journal reports, "won the visa lottery", while the other one (Russell Hall Seafood) "lost". The paper details the downstream effects of this so-called worker "shortage" on Hoopers Island, which sits a few miles down the road from Fishing Creek:

The unexpected worker shortage for some businesses has upended the economy. Processors that don't have pickers aren't buying crabs. Those crabbers aren't buying bait fish from local fishermen. The combination has slashed sales at the Hoopers Island General Store to its lowest level in six years, said owner Katie Doll.

The workers identified in the article at G.W. Hall & Sons are 21 women from Mexico, and it appears from the article that most of the usual workers are Mexican nationals as well. Businesses that have found themselves without Mexican nonimmigrant workers have turned to other workers with employment eligibility, the paper reports. Only two appear to have been Maryland natives; the only other identified nationality is Cambodian.

With respect to those Maryland workers, the article focuses on Lindy's Seafood on Hoopers Island, and its owner, Aubrey Vincent:

Ms. Vincent, 30, said local labor just supplements the Mexican pickers she needs. Lindy's was among the lottery losers this year, leaving the firm with 104 openings. On Hoopers Island, the company's big picking room on the banks of the broad Honga River is idle, and Ms. Vincent estimates lost sales of $20,000 a day.

The overall implication of the article is that there are few if any native local workers willing to do the job. Brian Hall, co-owner of G.W. Hall, is referenced in the article as stating that "he has had five American applicants in 20 years, none of whom showed up for an interview," and that the business has had trouble "attracting local workers" because "the jobs aren't year-round."

One other reason why these crab processors may have had trouble attracting local workers is because there are not many local workers to begin with. DATA USA states that there are 113 people living in Fishing Creek, Md., only 48 of whom are "employees". MDHomeTownLocator states that there are 440 people living on Hoopers Island, but does not identify how many of them are employed. The closest large town is Cambridge, just over a half hour's drive from Fishing Creek, and about 45 minutes from Hoopersville, on Hoopers Island. According to DATA USA, there are 12,552 people living in Cambridge, 5,629 of whom are listed as employees.

The article does not explain why it is necessary for the crab processors it identifies to run their plants in such a remote area, but proximity to the fishermen who catch crabs (known colloquially as "crabbers") is likely part of the reason. The Chesapeake Bay is a major waterway, however, so it is unclear why exactly the crabs could not be shipped to where there is a larger pool of employees to be processed, particularly for a business that is losing $20,000 a day in sales.

Accepting the fact that one of the few industries in a remote part of the state should not be uprooted, though, it is still unclear why those crab processors who are unable to access H-2B visas are not looking for workers from elsewhere in Maryland, rather than focusing strictly on Mexican laborers.

To those from areas where crabs are rare, unique, or not commonly consumed, the disassembly of a crab would appear to be complicated. In the state of Maryland, however, crab picking is a fairly common skill, as crabs are a common delicacy, and the consumption of crabs is a combination of pastime and social event for individuals from all social strata.

The pay, at least as described in the article, for crab pickers is not insignificant:

Processors legally must pay the workers at least $9.51 per hour, but most make a piece rate. At G.W. Hall that is $3.15 a pound. [A worker interviewed in the article] said her maximum is just over 40 pounds per eight-hour shift, translating to about $130 or $16.25 an hour. Mr. Hall said 30 pounds a day is more common. Workers pay U.S. taxes like American workers.

Further, housing for workers from outside the immediate area appears to be rather inexpensive, as the Journal explains:

Pickers live close to work. G.W. Hall, for example, houses them in two homes next to the picking house, charging each $40 per week, utilities included. The employees typically spend about eight months in Maryland before returning to their home country, processors say.

Respectfully, for the cost and expense (and the uncertainty of obtaining visas), it would appear to make more sense for the crab processors to recruit workers from Baltimore City (which, according to the U.S. Bureau of Labor Statistics (BLS) has an unemployment rate of 6.4 percent) or Salisbury, Md., (which has 11,400 unemployed workers, for an unemployment rate of 6.1 percent according to BLS, and which is an hour away from Fishing Creek) than to recruit them from Mexico.

If one wanted to argue that $9.90 an hour is too low a wage for an American to make, I have two responses:

Two, perhaps the wages that are being paid by the crab processors are too low. The Wall Street Journal notes that "Gibby's Seafood north of Baltimore is selling a pound of jumbo lump [crab] for $43.95." Given the fact that only $3.15 of that figure apparently represents the crab-picking itself, and even factoring in the cost of the crabs, business costs, and transportation, this would still seem to provide a healthy profit to the crab processors, money that could be spent on higher wages.

Of course, this is likely not the last word on the "shortage" of crab pickers on the Eastern Shore of Maryland. In a separate article, the Wall Street Journal reported that Secretary of Homeland Security Kirstjen Nielsen has told members of Congress (including a Maryland representative concerned about the needs of crab processors) that her department plans to issue an additional 15,000 H-2B visas this summer.

Again, respectfully, this is a job that Marylanders would do, and will do, hundreds of thousands of times this year.