In my last post, I discussed what we refer to in Washington-speak as the “topline” takeaways from the ICE Enforcement and Removal Operations (ERO) FY 2020 statistical report. Tucked away in that report is the fact that, while removals were down, ERO managed to nab a bunch of known or suspected terrorists (KSTs) last fiscal year. The next administration may increase that number, but that might not be a good thing. 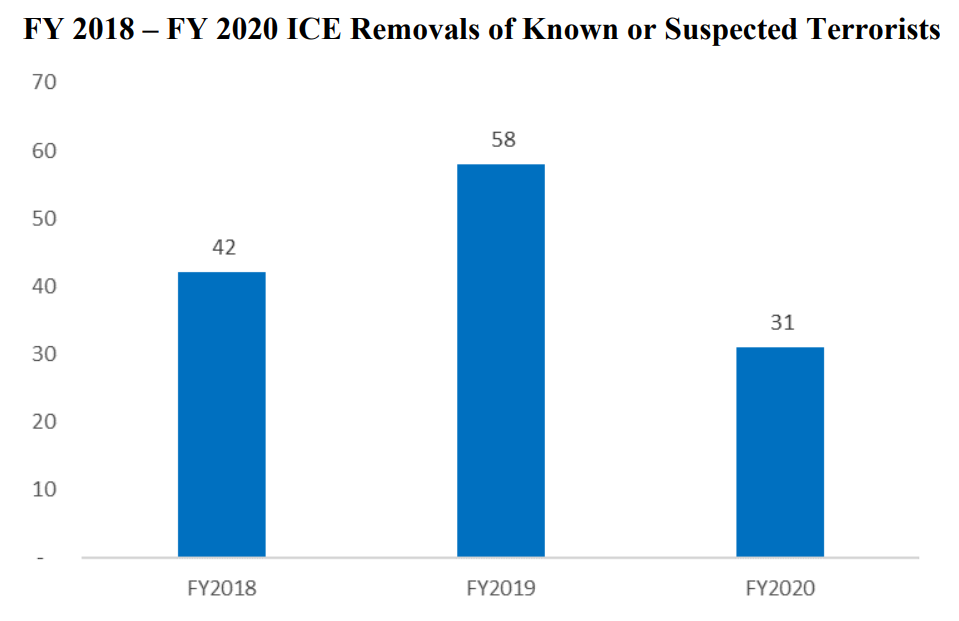 In a country of 330 million people, 31 (or even 52 or 48) KSTs may not sound like a lot. But keep in mind that you do not need many terrorists to cause a whole lot of carnage.

According to the Tennessean, the Christmas Day bombing in Nashville caused “massive destruction to 41 buildings”, disrupted phone and internet coverage over a wide area, and took out 911 communications in a number of counties. Authorities believe that the bomber – 63-year-old Anthony Quinn Warner of nearby Antioch, Tenn., who died in the explosion – was solely responsible for that blast.

No one (aside from Warner) was killed (although eight were injured), because the suspect blared evacuation warnings in advance, and the Nashville police responded quickly to the scene and evacuated those who could have been in harm. If Warner wanted a high death-count (and many terrorists do), he could have succeeded.

He is apparently a United States citizen, and his motive is unclear, but I hope that the point is not.

In case it is less than pellucid, however, consider the fact that just 19 terrorists carried out the September 11th attacks, killing nearly 3,000 people and injuring 10,000 others that day. More than 10,000 first responders in the area have subsequently developed cancer – 30 percent higher than the average – and more than 2,000 have succumbed to what are termed “9/11 illnesses” from toxic exposure resulting therefrom.

Now, there is no reason to believe that some, most, or any of those KSTs likely were planning a second September 11th (or even to detonate a bomb at Port Authority, drive a pickup truck down a bike path on Halloween, or shoot fellow students at a U.S.-based military installation), but arguments that terrorists by and large pose no direct threat to Americans miss the point.

Whether they are preparing to carry out militant actions abroad, or are attempting to provide support to foreign terrorist or militant organizations, the outcome is the same: people die, societies are undermined, and lives are disrupted. If you think that the disruptions to life from the pandemic are bad, imagine what it is like to live in Syria, or Israel for that matter.

Or, consider what life was like under ISIS. Here is one excerpt, from a 2015 congressional hearing:

Nearly a year ago, ISIS began its deadly offensive on the Yazidi population in the Sinjar area of northern Iraq. As many as 50,000 Yazidis were forced to flee. Five thousand Yazidi men were massacred, and between 5,000 and 7,000 women and girls became ISIS slaves. We have heard the horrifying stories from survivors, accounts of systematic rape, torture, forced marriage, and other abuses. Girls as young as 12 have been raped, often multiple times and by different fighters.

As Americans, we are often asked to consider where our taxpayer dollars are going. That excerpt explains where terrorist funds raised in the United States are going. Why do so here?

When asked why he robbed banks, 1930s serial larcenist Willie Sutton replied, “Because that’s where the money is.” Terrorists and their supporters raise funds in the United States for the same reason. And why it was important for ICE to have removed those 31 KSTs in FY 2020, even if they were not planning attacks here.

The number this year is likely comparatively low because—simply put—it is really hard for foreign nationals (and particularly foreign nationals with malicious intent) to enter the United States due to the pandemic restrictions on travel.

And, with respect to all those who decry them, President Trump’s travel restrictions (formally Presidential Proclamation (PP) 9645, “Enhancing Vetting Capabilities and Processes for Detecting Attempted Entry Into the United States by Terrorists or Other Public-Safety Threats”) almost definitely played a role, as well.

PP 9645 resulted from a rigorous directive by the White House to executive-branch departments to determine “what[] additional information would be needed from each foreign country to assess adequately whether their nationals seeking to enter the United States pose a security or safety threat.”

As I explained in congressional testimony in September 2019, the resulting report established a "baseline" for the types of information that were required to determine whether a foreign national should be allowed to enter the United States.

The baseline consisted of three categories of information relevant to the ability of U.S. officials "to confirm the identity of individuals seeking entry ... and ... assess whether they are a security or public-safety threat."

The first category is "identity-management information", which "focuses on the integrity of documents required for travel to the United States" – that is the travel documents (such as passports) presented by foreign nationals for entry into the United States. The basic purpose of such information is to determine whether applicants for visas are who they claim to be.

The second category is "national security and public-safety information". Its focus is on the country in question, and in particular on whether that country provides criminal and terrorist information to the United States about individuals seeking entry upon U.S. government request, and whether it provides exemplars of travel documents (in order to tell good ones from bogus ones).

The third category is "national security and public-safety risk assessment". This category is broader, and focuses on "whether the country is a known or potential terrorist safe haven" and whether it accepts its returned nationals.

Simply put, if terrorist movements are active in a country, or if that country actively provides haven to such terrorists, members of those movements may seek to enter the United States to engage in terrorist activity. This category addresses that possibility, as well as this country’s ability to remove aliens who are later found to pose a risk.

Certain nationals from 13 countries are restricted in their ability to come to the United States under PP 9645 and the subsequently issued Presidential Proclamation 9983. Proving a negative is impossible in this situation, but in my expert opinion (as former acting chief of the INS National Security Law Division and former staff director of House Oversight’s National Security Subcommittee), they surely impeded – if they did not prevent entirely – terrorist travel to the United States.

Even with all of that, however, the removal of 31 KSTs by ICE in FY 2020 is laudable. Those are 31 potential terrorists who will have a tough time harming this nation’s people and its institutions, or helping to spread death, insecurity, and despair abroad.

Ideally, the number of KSTs removed would be zero, because they would not be able to enter the United States to begin with. Will ICE reach that goal?

I am not optimistic, because President-elect presumptive Joe Biden attacked PP 9645 on his campaign website as “Muslim bans”, which he asserts “can serve as a powerful terrorist recruiting tool” (although he never explains how). Not surprisingly – given his characterizations – he vowed to “immediately rescind” those proclamations.

I would note that – as I told Congress in 2019 – PP 9645 is not “a ‘Muslim ban,’ because, as the Supreme Court has noted, it makes no reference to religion, ‘covers just 8% of the world’s Muslim population and is limited to countries that were previously designated by Congress or prior administrations as posing national security risks.’”

And, I could add, the proclamations cover two countries – Venezuela and Burma – that have few Muslims at all, and make no distinctions on the basis of religion for any of those countries – at least two of which (Nigeria and Eritrea) have significant non-Muslim populations.

Nonetheless, given the amount of misunderstanding surrounding the two proclamations, this is a vow that Biden is likely to follow through on. Whether their rescission is followed by an equally vigorous vetting regime (which would be difficult to perform, particularly in a closed-off country like Eritrea, one without reliable documents like Somalia, or one hostile to the United States like Iran) remains to be seen.

If not, ICE’s job of identifying KSTs is going to become a whole lot more difficult.