Georgia Case Gets Curiouser and Curiouser, but Looks Headed to a Good Outcome

Last Thursday, I wrote a post detailing questions that have been raised about whether foreign nationals are displacing U.S. workers at a massive (and heavily government-subsidized) construction site in Georgia, captioned "CBP Stops Elaborate Fraudulent Employment Scheme to Deprive American Workers of Jobs: So complicated, I can't figure out exactly what it was, who did it, or really even why". That story is getting curiouser and curiouser, with allegations of foreign workers living in overcrowded housing and questions about an abandoned chicken farm. But thanks to serious congressional interest and dogged reporting, this complicated case looks headed to a good outcome. 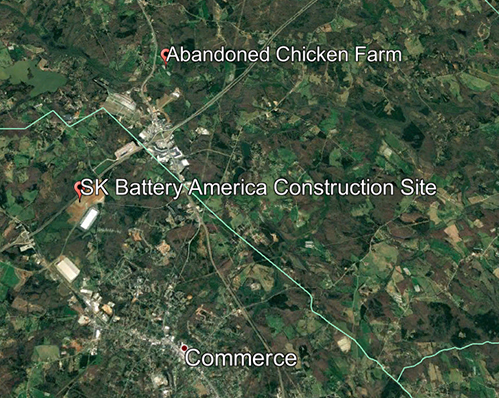 Just to recap, the state of Georgia and Jackson County (Ga.) invested heavily to land a factory that will make batteries for electric cars, to be run by SK Battery America (SKBA), a subsidiary of the South Korean firm SK Innovation (SKI). Plainly, given the economic downturn caused by the Wuhan coronavirus pandemic, there are workers in Jackson County and its neighboring jurisdictions who could use some of the promised 2,600 good-paying jobs that plant will provide, in what is a forward-looking industry.

The construction of that plant, however, has raised questions and eyebrows. On this point, I would be remiss if I did not mention the work of reporter Randy Travis with the local Fox affiliate, who has been on the story like a bulldog on a pot roast. Or of the interest in the matter of the local congressman, Rep. Doug Collins (R-Ga.), erstwhile ranking member of the House Judiciary Committee.

Travis suggested that contractors on the construction job have been "flying in overseas workers rather than using Americans to do some of the basic construction" (SKBA denied doing the construction hiring itself). There does not appear to be a lack of available labor in northeastern Georgia for that purpose. In fact, Travis's reporting has been supplemented with the views of a local construction union representative on the willingness of American workers to do those jobs.

Which brings me back to some of the more unusual aspects of the matter. In my last post, I explained that CBP had stopped and expelled two separate groups of Korean nationals (33 in total on separate flights) in May. They were ostensibly attempting to enter the United States under the visa waiver program (VWP), and had with them bogus employment letters. The Fox reporting revealed that they were headed to the SKBA site.

According to the agency, the letters that each of the 33 carried claimed that they had (unspecified) specific skills that they, apparently, did not actually possess.

Travis's reporting suggests that the presence of those workers is more the exception than the rule, as "most of the construction workers seemed to be Korean" and "some of them ... share rental homes in neighborhoods all around the plant." Now, of course, that in and of itself would be of little moment, as there is a large, vibrant — and legal — community of Americans of Korean extraction in the United States.

There are facts that would lead one to conclude, however, that the workers in question would not fall within that lawful resident population.

Before I go any further, I note that SKI has admitted that it was hiring Korean workers to build the factory, but it claims that those workers "are specialized in constructing battery factories". If true, they could potentially qualify under the VWP, as I explained in my earlier post. The union rep contended, however, that, with limited exceptions, most of the work on the plant could be done by American workers.

Needless to say, the fact that CBP stopped 33 Korean workers headed to the plant on what it described as "fraudulent employment letters" would also appear to suggest that not all of the Korean nationals working at the plant were truly needed for the project, either.

More recently, however, there have also been complaints from neighbors that many of those who are working at the site are living in overcrowded conditions. Collins, in a letter to ICE, asserted that he had received information that over 30 houses in the area had been rented to support what he described as an "illegal workforce".

Under local ordinances, only four unrelated individuals may live in a house at a time. Anyone who has served on a local community association (or lived in a college town) would know that such laws are common throughout the United States.

Fox reported on one house that was not (apparently) in compliance with the ordinance, which raised yet another curious aspect of this story. Neighbors had complained that up to 14 men were living together there, and nine of them were interviewed after they got out of a work van that had stopped at the house in question.

Only five claimed to live there (the rest were simply stopping by for lunch), however none claimed to be Korean. Rather, all asserted that they were from the Federated States of Micronesia. As my colleague David North has explained, Micronesia (which consists of 600 islands in the western Pacific) was a former colony of the United States, but is now self-governing (although heavily subsidized by the United States).

Thanks to its relationship with this country, Micronesians are free to enter the United States to work, but they are not eligible for green cards unless they are the beneficiaries of immigrant visas. The nine had purportedly signed contracts to work at the plant in July, although when asked what sort of work they did, they simply replied: "Labor."

There is nothing wrong with Micronesians working in this country, but this vignette does raise the question as to why anyone would bring workers 7,800 miles from their island homes to work in the small town of Commerce, Ga., particularly when the local labor rep says there are hundreds of unemployed workers available to do the job. Neither SKI nor SKBA suggests that they also are specialized workers, but perhaps they were just never asked the question.

If they aren't, securing those Micronesian nationals would appear to be a rather complicated undertaking — a lot more complicated than simply posting a job on a website, or heading to the local hiring hall.

Back to the Korean national workers, however. It is possible that they were here lawfully, or that, as SKI stated, they had specialty skills and were therefore lawfully admitted to work.

Collins stated on August 19, however, that it was his understanding that CBP had determined that the attempted entry by the 33 Korean nationals it subsequently expelled was not an isolated incident, but rather that they "were part of a larger scheme to illegally bring foreign workers into the United States."

In fact, he stated, he had been contacted by a constituent familiar with the facility, who said the 33 "represent only a small fraction of the workforce on this project that have systemically and illegally been brought to the United States to displace American workers."

Similarly, the Fox affiliate later found five Korean nationals living in a nearby home, but was unable to question any as they spoke no English. Again, perhaps they were new immigrants (in the legal sense of the word), but in a somewhat unusual act, they moved out the very next day — suggesting that someone did not want any further inquiries into the matter.

And then there is the issue of the abandoned chicken farm, to which I alluded to earlier. It sits less than five miles from the work site.

While it is at the end of a one-lane, dead-end road, a local resident had noted a number of work trucks were headed there at the end of July. So he asked where they were going, and they responded that they were training to do welding, but: "They said it was supposed to be a secret."

In her song, "Famous in a Small Town", country singer Miranda Lambert explains that there are no secrets in rural areas, a fact that the organizers of this endeavor appeared to have overlooked. It quickly drew the attention of local officials, who investigated. "According to the incident report filed by Banks County code enforcement officer Paul Ruark, a manager on the property said 'they had set up testing sites for welders to make sure they were qualified to do the work.'"

In fact, Collins told ICE, local officials found "200 persons, the overwhelming majority of apparent Korean nationality, working in a large-scale effort to train on-the-job welders." He pointed to this as "another example of 'an effort to replace American workers with Korean foreign nationals'".

SKBA, for its part, claimed that it was unaware of the chicken farm set-up, explaining that "any off-site workshops perform welding for the site, not training programs."

Not surprisingly, work at the abandoned chicken farm ceased shortly after the county got involved. Collins tied that enterprise, however, to another issue that apparently had arisen at the construction site:

I have heard for weeks that American building inspectors had found the work done on the job site insufficient, having failed the welds made on mechanical systems. Experts have said that it is clear that proper welding procedures were not followed.

The local union rep was blunt in his assessment of these facts. Noting that there are plenty of local welders (both union and non-union) in the area; he concluded: "They're set up to work Koreans. ... And they can't deny it."

As noted, SKI initially pushed back, asserting that it had hired the Korean workers in question because they had specializations in constructing battery factories. Collins was having none of it, telling ICE in an August 26 letter that this statement was "impossible to reconcile with the extensive training operation discovered" at the abandoned chicken farm, and contending, moreover, "it is legally no excuse for breaking U.S. immigration laws."

Fortunately, this looks like a story that is headed toward a happy ending for the workers of northeast Georgia — likely thanks to Rep. Collins, Travis, and the union. On Friday, it was reported that SKI has instituted what are described as "daily document checks" at the worksite, and that those lacking "clear" work authorization "will be barred from entry."

SKBA also promised to perform what are described as "ongoing inspections" to ensure that contractors are in compliance with the laws, and SKI plans to "impose severe sanctions, including possible termination" on any contractor found to be in violation of U.S. employment laws.

I have no doubt that Travis, Collins, and (especially) the union will be all over SKBA and ICE as the former undertakes those inspections. And, given the fact that Collins has already voiced his concerns to ICE, I would expect at least an audit of the documents for all of the employees at the Commerce worksite.

Perhaps, the agency will find that SKBA, SKI, and their contractors have complied with the law in bringing Korean nationals under the VWP (or some other visa categories) to the United States. If not, however, for the hundreds of available out-of-work laborers in the area, it could be a very productive fall.