Despite Biden SOTU Claim, Most Southwest Border Drug Seizures Down

Without new border policies, drugs will flow in and Americans will die. Stats don’t lie. 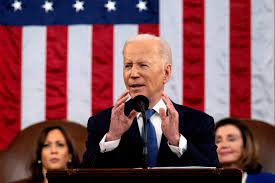 In his State of the Union address (covered by my colleagues Robert Law and Mark Krikorian), President Biden touted the fact he’s “installed new technology like cutting-edge scanners to better detect drug smuggling”. I am not sure how much “cutting-edge” technology Biden has sent to the border (the president’s seeking an additional $32 million for inspection technologies at the ports in FY 2022), but CBP has had mixed results when it comes to drug seizures thus far in FY 2022. The agency would be better able to stop the cross-border flow of drugs if the president implemented policies that would deter illegal migrants.

CBP’s Drug Interdiction Efforts at the Border. CBP stops drugs at the border in one of two ways: Drugs are either interdicted by CBP officers (CBPOs) in the agency’s Office of Field Operations (OFO) at the ports of entry or by agents in its U.S. Border Patrol component along the border between the ports.

CBP has developed a valuable webpage detailing OFO’s and Border Patrol’s narcotics interdiction efforts captioned “Drug Seizure Statistics”. You can toggle around that page and find useful data on specific drugs seized at each port and Border Patrol sector over the last four years.

That page also includes a helpful graph, which tracks drug seizures monthly over that four-year period. If you check out either OFO or Border Patrol at the Southwest border, you will see that drug seizures in December and January by each component have been running at or below prior years for the past four years, and in the case of Border Patrol, well below seizures between October and January in that quadrennial period.

In other words, if drug-detecting technology has improved in the past year, CBPOs and Border Patrol agents are not necessarily catching any additional contraband — in certain cases, they’re seizing less, at least in the short run.

In January, CBPOs at the Southwest border ports seized nearly 10,600 pounds of various illicit drugs, a 12 percent decline from January 2021, and more than 60 percent less than they nabbed in January 2020. In December, OFO drug seizures at those ports were 13,270 pounds, a 53 percent decline from December 2020, and almost 72 percent less than they seized in December 2019.

Marijuana. Of course, not all drugs are the same. Marijuana, for example, has a lower street value than other drugs, meaning that smugglers must ship more of it to make money. Large quantities of marijuana, however, are easier to detect than smaller quantities of other drugs (marijuana also has a distinct odor that makes it more easily detectable).

Border Patrol agents usually make more marijuana seizures than CBPOs because smuggling of the drug has traditionally followed a different business model. Backpackers, carrying 50 to 100 pounds of the drug, have long crossed the border to the United States while attempting to evade apprehension.

At least some of that decline has resulted from the fact that states are increasingly legalizing or decriminalizing the drug, leading to a decline in demand for foreign weed (which is usually of lower quality and potency). There is still a strong black market, however, calling into question whether pot legalization explains all the decline in CBP seizures.

Methamphetamine. Then there’s methamphetamine, a synthetic drug. In January, OFO at the Southwest border seized 4,970 pounds of the drug — a 30 percent decline from the same month a year before, and a 44 percent decrease from January 2020.

As NPR explained in December, Mexican cartels have been switching to meth from marijuana and opioids — the source materials for which are subject to seizures and crop eradication efforts south of the border. As noted, legalization efforts in the United States have also diminished the demand for imported marijuana, cutting into cartel profit margins.

As Mexican meth production has increased, DEA has reported seizures of home-grown meth labs in the United States have been on the decline. According to the agency, there were 890 U.S. meth lab “seizure incidents” in 2019, much lower than in the prior 19 years (there were 15,256 seizure incidents in 2010, and 5,467 as recently as 2016); most recent U.S. seizures have been of small-scale operations.

Simply put, most meth now comes over the border from Mexico, and demand for the drug is growing. DEA reports that it “seized 53,079 kilograms of methamphetamine nationwide in 2019, an increase of 55 percent from 2018 (34,270 kilograms)”, and that “methamphetamine has become more prevalent in areas that historically were not major markets for the drug, particularly the Northeast.”

For Border Patrol’s part, agents took up some of the slack from OFO. They seized 1,020 pounds of methamphetamine in January, which was a 26 percent increase over the same month in 2021. It was a 24 percent decline over January 2020, however, when agents stopped 1,317 pounds of meth.

Border Patrol’s January meth seizures, however, were bolstered by the fact that agents at checkpoints grabbed 457 pounds of the stuff in January and made one traffic stop where they found 46.5 pounds of methamphetamine near Indio, Calif., on January 21.

The only reason that Border Patrol agents were able to make those highway seizures was that the meth either came in through ports of entry undetected or the smugglers brought it over the border illegally without getting caught. So much for the utility of “cutting-edge scanners” at the ports.

Fentanyl. Then, there is fentanyl. It’s particularly deadly — 50 to 100 times more potent than morphine and two milligrams can kill you (depending on your body weight and tolerance). Worse, as the DEA explains, fentanyl is being mixed with other illicit drugs to increase their potency.

Not surprisingly, the panel concluded, cartels and transnational criminal organizations are the ones who are smuggling those synthetic opioids from Mexico to the United States. CBP’s efforts to stop them have been a mixed bag.

In January, OFO seized 796 pounds of fentanyl, a 4 percent increase over the same month a year before. More significantly, however, it is a 720 percent increase over January 2019. The difference, however, may be the huge spike in the drug’s popularity in the United States (leading to increased shipments), as opposed to improved efforts by CBPOs.

Checkpoint apprehensions are not broken down by region, but given the fact that Mexico is the source country for U.S. fentanyl, it’s a safe guess that most was seized on highways in the Southwest.

Some of the fentanyl seized by Border Patrol plainly had made its way between the ports. Here’s just one example.

Shortly after midnight on February 1, Border Patrol agents responded to a call near Guyler Lane in Del Rio, Texas, and found three suspects, one of whom dropped a backpack containing .44 pounds of fentanyl and nearly six pounds of meth. The trio attempted to abscond into the bush but were taken into custody. Each was an illegal migrant.

Guyler Lane is a street that wends its way for about a mile-plus roughly parallel to the banks of the Rio Grande. It’s not far from the Del Rio-Acuña Port of Entry, but the three suspects — again, all “undocumented migrants” in the nomenclature the Biden administration has foisted upon CBP — plainly did not pass through it.

The fentanyl found there would be enough to kill just short of 100,000 users, but more importantly has a street value (on the low end, fentanyl sells for $150 per gram) of $34,000. The meth would have netted anywhere between an additional $7,900 (at $3 per gram) to $1.3 million (the good stuff is $500 per gram). That’s serious money for a short trip across the river, assuming that the threat of prison or morals aren’t an issue.

Until Illegal Immigration Is Under Control, CBP’s Fighting a Losing Battle. None of this is intended to criticize or denigrate the ability of CBPOs or Border Patrol agents to seize drugs. The good ones are world-class experts at what they do, and almost all are dedicated to the cause and love busting “dopers”.

And I have long been in favor of better detection technology to help CBPOs find contraband at the ports and am glad that the Biden administration wants $32 million dollars to provide OFO with cutting-edge scanners.

Those CBPOs would be in a lot better position to use that fancy technology to locate and seize illegal drugs, however, if smugglers weren’t able to simply do an end around the ports by bringing their drugs in illegally over the border.

They are able to do so, as former Border Patrol Chief Rodney Scott told Congress in September, because Border Patrol agents have their hands full apprehending, processing, and caring for the current massive wave of illegal migrants.

That’s on top of the 1.659 million-plus illegal migrants Border Patrol agents had to deal with at the Southwest border in FY 2021 — an all-time record for apprehensions there. Scott explained how smugglers have been manipulating the recent illegal migrant flow to tie up agents and move in drugs.

Apprehending, providing for, and (increasingly) releasing thousands of aliens a day at the border makes it impossible for agents to stop the flood of drugs over the U.S.-Mexico line. Biden can put all the “cutting-edge scanners” he wants to at the ports, but the smugglers are just going to get drug mules — like the three on Guyler Lane in Del Rio — to carry their drugs illegally into the United States.

They got caught. How many smugglers get through? Former acting ICE Director Tom Homan estimates that half a million migrants got away, and questions how many were carrying drugs.

You can calculate the number of successful smugglers in part by counting the rise in U.S. drug overdose deaths and the decline in the price of drugs. Officials told me during my recent trip to Arizona that the cost of fentanyl on the streets of Phoenix is plummeting. It’s not a demand problem.

DEA seized 20 million counterfeit fentanyl pills in 2021 — more than they seized in the prior two years combined. Forty percent contain enough of the drug to kill. Those drugs are coming from somewhere.

More than 15 years ago, then-Sen. Joe Biden (D-Del.) argued that the border walls he voted for would not work without other effective policies. As president, Biden seemingly has forgotten that fact as it relates to scanners at the ports and drugs.

Law explains that the president simply doubled down on his failed immigration schemes in his State of the Union address. That’s a problem, because until the president implements new and better border policies that free up Border Patrol by deterring illegal migration, drugs will flow in and Americans will die. Statistics don’t lie.