Buckets of Meth and the Guns in the Grass

‘Guns come south, drugs go north’ — expect it to get worse as the number of migrants surges. 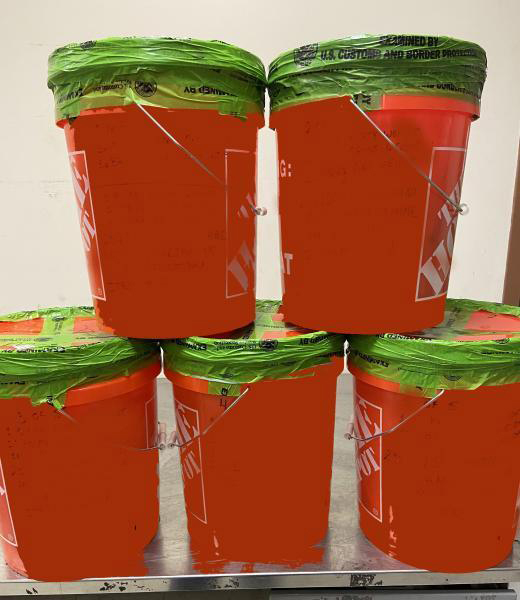 Two recent events on May 5 underscore the crisis that is unfolding at the Southwest border. One involved a number of high-powered guns, the other buckets full of methamphetamine. Neither has received much attention, but both reveal the price that communities across the United States and Mexico are paying for a border situation that is out of control.

On May 5, a National Guard member assigned to the Eagle Pass South Station in Eagle Pass, Texas, found a gym bag in tall grass. Border Patrol agents who went to check it out discovered eight AK-47-style pistols, as well as 10 30-round AK-style magazines. Four of the weapons had been reported stolen.

There is no reporting on the origin of the four remaining pistols.

These do not appear to be weapons that one would commonly use for hunting, nor for home defense. Rather, they look like the sort of guns that would be used in a guerrilla war zone. Which, unfortunately, much of the northern border of Mexico (those guns’ likely destination) has become.

It has been almost six years since a Mexican military official (with whom I met as a congressional staffer in the border city of Nuevo Laredo, about 100 miles south on the Rio Grande from Eagle Pass) bottom-lined the regional security situation there for me: “Guns come south, drugs go north.” If anything, things have gotten worse since then.

More than 300,000 people have been killed in Mexico since the government there declared war on the cartels in 2006. As the Council on Foreign Relations has explained, those cartels “dominate the import and distribution of cocaine, fentanyl, heroin, marijuana, and methamphetamine in the United States.”

The heroin and meth come from Mexico, the cocaine transits through from Colombia. Some of the fentanyl comes from China, some from Mexico, but it is a growing problem: “The amount of fentanyl seized by Mexican authorities nearly quintupled between 2019 and 2020.”

Those drugs have fueled killings and crime south of the border. There were 34,515 homicides in Mexico in 2020, down 133 deaths from 2019. A bigger drop in murders was expected as a result of coronavirus shutdowns last year, but you take good news where you can get it.

AMLO has been criticized for his approach to the cartels. The Citizens Council for Public Safety and Judicial Justice, a Mexico-City based group, complains that AMLO “hasn’t moved against organized criminal groups, which it says are responsible for much of the violence, under the assumption the criminals ‘will behave well’ if police leave them alone”.

They also characterize an AMLO social-spending policy, intended to dissuade individuals from joining gangs, as “questionable”.

Speaking of drugs, on May 5, CBP officers who were working the Hidalgo-Reynosa International Bridge in Hidalgo, Texas, sent a 37-year-old U.S. citizen to secondary inspection. A dog was deployed, and 94 packages containing 216 pounds of suspected meth — street value $4,317,000 — were discovered and intercepted.

Those packages were secreted in five Home Depot buckets. If you have ever done projects around the house, you are likely familiar with those five-gallon bright orange tubs. I knew that they were handy for spring cleaning and yard tasks, but apparently they have other, less licit, uses.

Those drugs were likely not for local, let alone personal, consumption.

Police seizures of domestic meth labs (à la “Breaking Bad”) have been on the downswing for the last decade — falling from 15,256 in 2010 to 890 in 2019, according to the most recent DEA reporting. At the same time, however, poisoning deaths from psychostimulant-involved drugs (including methamphetamine) have increased during the same period — climbing from 1,854 in 2010 to 12,676 in 2019.

The insecurity at the border is the reason why. DEA reports that meth seizures by CBP at the Southwest border rose more than fivefold (from 10,969 kilograms to 68,355 kilograms) between 2013 from 2019.

Which leads me to the migrant situation at the border. On May 3, CNN reported that CBP encountered an average of almost 6,000 migrants daily at the Southwest border last month (official numbers have not been released yet) — continuing a pattern of 20-year monthly highs.

While the Biden administration has been trumpeting the fact that it has been moving unaccompanied children out of CBP facilities and into shelters run by the Department of Health and Human Services (HHS), that article noted that high apprehension numbers “continue to pull attention and personnel away from other national security and border security efforts” — like drug seizures and weapons interdictions.

“Guns come south, drugs go north.” Don’t expect that two-way transit of death and misery for both the United States and Mexico to abate until the Biden administration comes up with a real response to stem the two-decade record of illegal entries at the Southwest border.