Something funny is going on; maybe Joe Biden should review his 15-year-old border claims 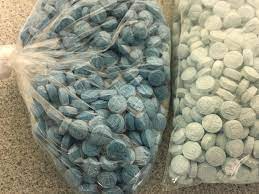 CBP Media Releases can be informative and entertaining. Like the fact that “certain agricultural items” used in Día de los Muertos celebrations (primarily “greenery and citrus used in the construction of remembrance altars”) can’t be brought into the United States, or the story of the miniature pet pig who “Went Wee Wee Wee All the Way Home” after its owner was stopped from bringing it in at Otay Mesa, Calif. Or the fact that Border Patrol agents are seizing increasing amounts of fentanyl, a uniquely dangerous drug, the “vast majority” of which supposedly only comes through the ports.

Fentanyl. In November, CDC reported that drug overdose deaths in the United States were up 28.5 percent in the 12-month period ending April 2021, to over 100,000.

According to the DEA, most of the illicit fentanyl in the U.S. drug market is “manufactured in foreign clandestine labs and smuggled into the United States through Mexico”. Which begs the question of how it gets over the border.

Many politicians — particularly Republicans — have linked the fentanyl flowing into the United States to the ongoing chaos at the Southwest border.

In an August NPR/Ipsos poll, respondents were asked whether it was true or false that “Most of the fentanyl entering the U.S. is smuggled in by unauthorized migrants crossing the border illegally”. Some 39 percent of respondents — including 60 percent of Republicans and 38 percent of Independents — asserted that this statement was true. For the record, it probably isn’t.

Still, it was a “gotcha” question in a “gotcha” poll, akin to those “man in the street” interviews that have been a staple of late-night TV for years, in which the host is the font of knowledge and the person being asked the question is a rube.

After presenting the results of its poll, NPR snidely and condescendingly explained that “experts” (unnamed) “say the vast majority of fentanyl and other illegal drugs are smuggled through official ports of entry, hidden in large trucks and passenger vehicles, while a relatively small amount is smuggled by cartels across the border between those ports”.

Who's an expert and what’s a “relatively small amount” of fentanyl are, of course, both subjective. In any event, NPR was channeling its inner Joe Biden, who, while explaining that a “wall” was an unneeded luxury at the Southwest border, proclaimed on the campaign trail in 2020: “Today, illicit drugs are most likely to be smuggled through one of the legal U.S. ports of entry.”

Keep in mind this is the same Joe Biden who, during one of his unsuccessful presidential campaigns in 2007, told attendees at an event in Iowa that border fences were necessary, because “you can’t take 100 kilos of cocaine over and under a fence. And, when you have limited places where fences are in populated areas, you force these drug dealers and others around, making it easier to apprehend”.

Consistency is not a virtue in politics, and certain news outlets (like NPR) can have short memories when they want to.

Border Patrol Drug Seizures. Again, as I noted (and yes, I am an “expert” by dint of 30 years of immigration and border experience), “most” drugs come into the United States through the ports of entry in seemingly and otherwise licit commerce or travel. That still raises the question of whether the chaos at the Southwest border is providing an opportunity for cartels and smugglers to bring drugs into the United States.

And the answer to that question is “yes”. But you don’t have to believe me. Rodney Scott, Biden’s first Border Patrol chief, explained in a letter to Senate leaders last September that:

[I]llegal entries are being scripted and controlled by Plaza Bosses that work directly for the transnational criminal organizations (TCO) to create controllable gaps in border security. These gaps are then exploited to easily smuggle contraband, criminals, or even potential terrorists into the U.S. at will. Even when [Border Patrol] detects the illegal entry, agents are spread so thin that they often lack the capability to make a timely interdiction.

“Contraband” can be many things, from miniature pigs to Día de los Muertos altar greenery. TCOs aren’t making big money off those items, however. They make it off drugs.

Still, you can doubt me and former Chief Scott. Which brings me to Border Patrol agents’ recent drug seizures.

On October 20, agents responding to a remote camera hit near the border in Eagle Pass, Texas, at 2:43 a.m. came upon a Mexican national carrying a backpack — the definition of “reasonable suspicion”. The CBP press release explains what happened next:

A search of his backpack revealed 24 packages wrapped in black tape. The subject was transported to the south processing center in Eagle Pass, Texas where a subsequent search of his backpack revealed the packages contained 14.77 pounds (6.7kg) of crystal methamphetamine, 5.56 pounds (2.52kg) of fentanyl pills, 1.08 pounds (0.49kg) of cocaine, and 1.08 pounds (0.49kg) of marijuana.

That likely wasn’t all for personal use, given that 2 mg of fentanyl can be a lethal dose, meaning the 2.52 kg that Mexican national was carrying is enough to kill 1.26 million people.

Then there were the events of September 23, when Border Patrol agents in California’s Jacumba Wilderness region came upon two illegal aliens hiking in the mountainous terrain. Nearby, they discovered “a cylindrical-shaped package tightly sealed with saran wrap and tape”. It contained a half-pound of fentanyl.

Or, how about this tweet, from current Border Patrol Chief Raul Ortiz:

Remember when I said that most drugs come through the ports? That was true last year, as CBP officers at the Southwest border ports seized 190,000 pounds of drugs in total, including 1,200 pounds of heroin, 142,000 pounds of meth, 22,400 pounds of cocaine, and 11,900 pounds of fentanyl.

Of course, CBP officers at the ports have advantages Border Patrol agents don’t. All traffic through the ports must stop for inspection, while traffickers crossing illegally between the ports of entry deliberately avoid agents. CBP officers also have tools like giant X-ray machines and drug-sniffing dogs that are unavailable to agents in the field.

Something Funny Is Going On. That said, something funny is going on, because even while U.S. overdose deaths are surging, port drug seizures are down, too. Except for fentanyl, seizures of which at the ports increased by just over 19 percent.

But look at those numbers again: Border Patrol seizures of fentanyl in FY 2022 increased by 120 percent over FY 2021, while port seizures of the drug — although significantly larger — were only up just over 19 percent.

That suggests that the fentanyl seized in recent weeks by Border Patrol agents in Eagle Pass and the Jacumba Wilderness, and depicted in Chief Ortiz’ tweet, weren’t the only loads of the stuff coming over the Southwest border.

Perhaps TCOs — horrible individuals who just happen to be smart business types — have figured out, as Chief Scott explained, that they can take advantage of agents overwhelmed by having to apprehend, transport, process, care for, and too often release tens of thousands of illegal migrants monthly to smuggle drugs over a border in chaos into the United States. And perhaps it’s time for Joe Biden to review what he said about the border 15 years ago in Iowa.