White House nevertheless doubles down on failure in its immigration 'Blueprint'

new ABC/Ipsos poll contains some (relatively) good news for the president, but not much, and he received his lowest marks on immigration. Despite the unpopularity of the president’s immigration policies, however, the White House is doubling down on them.

First, the (relatively) good news for the administration in that poll.

Some 63 percent of respondents approved of Biden’s response to the COVID-19 pandemic. While still in positive territory, that is down nine points from late March, when 72 percent approved of his handling of the pandemic response.

Similarly, the president received 53 percent approval for his handling of the economic recovery, with 46 percent disapproval. Good, but down seven points from late March, when he enjoyed 60 percent approval on the issue.

When it comes to the withdrawal of U.S. troops from Afghanistan, 55 percent approved of the way that Biden is handling it, with 41 percent disapproval. Three percent of respondents skipped the question.

Fifty-two percent of those polled stated that the president was doing an excellent (10 percent) or good (42 percent) job of keeping his campaign promises. Of course, it is unclear whether the respondents approved of those promises to begin with.

There is plenty of reason to believe some did not, because that appears to be the extent of the positive for the president in this poll.

Just 39 percent approved of the way that Biden is handling crime, compared to 59 percent who disapproved.

Then, there was the president’s handling of immigration and the situation at the Southwest border. On that question, just 37 percent approved of Biden’s performance, while 61 percent disapproved (three percent skipped answering).

This negative response is actually worse than it appears, because it was boosted by the 63 percent of the president’s fellow Democrats who approved of Biden’s performance on the issue. Just more than one in three of Independents – crucial swing voters in next year’s mid-term elections—approved of the president’s handling of immigration and the border.

Not surprisingly, Biden received low marks on this question from Republicans (seven percent approval), but notably it was the lowest level of support that the president received from GOP respondents for any of the questions that were asked: 30 percent of Republicans, for example, approved of his handling of the pandemic. 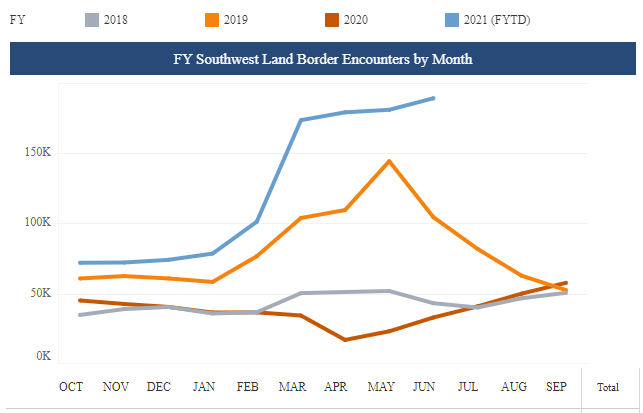 It was the Independents that brought him down, with just 34 percent of them approving of his handling of the issue.

Despite the president’s low polling on immigration and the border, however, the president is not changing course on his policies.

On July 27, the White House published a fact sheet titled “The Biden Administration Blueprint for a Fair, Orderly and Humane Immigration System”.

It begins with a rehash of what it terms the “considerable progress” the administration has made “to build a fair, orderly, and humane immigration system”. That’s before it takes swipes at what it describes as “the prior Administration’s cruel and reckless immigration policies, which exacerbated long-standing challenges and failed to securely manage our border”.

The president plainly has not reviewed CBP’s own Southwest Land Border Encounters statistics in this regard: Even before the pandemic travel shutdowns, monthly encounters there (the total of Border Patrol apprehensions and aliens deemed inadmissible at the ports of entry) topped out at just over 144,000 in May 2019, and never exceeded 82,000 between July 2019 and January 2021.

In February, those numbers exceeded 101,000, and have been on an upward trajectory ever since. There were almost 189,000 such encounters in June, and Border Patrol apprehensions (in particular) have been running at 21-year highs since April, as I explained on July 16.

Nothing in the remainder of that “blueprint” is going to bring those numbers down anytime soon. Rather, it includes promises to expand asylum eligibility (and to give aliens with non-meritorious asylum claims even more opportunities to pursue them, by adopting a plan I described unfavorably in April), while providing free lawyers for certain “families and [undefined] vulnerable individuals”.

It also vows to tackle the “root causes of migration” from Central America by throwing more money at them ($861 million in FY 2022 alone). I wish the administration all the best, but the “root causes” it identifies — “the lack of economic opportunity, weak governance and corruption, and violence and insecurity” — are largely institutional and thus intractable, at least in the very-long short term.

Nothing in the White House blueprint is going to address the current border disaster, and will probably just encourage even more illegal migrants to come. The ABC News/Ipsos poll, however, shows that the American people are fed up with the president’s failures on immigration. If Biden does not change course, he could be in for a difficult second half to his first term, and likely won’t get a second one.