But that won’t happen, because 45 Democratic senators opposed mandating E-Verify for the bill’s beneficiaries 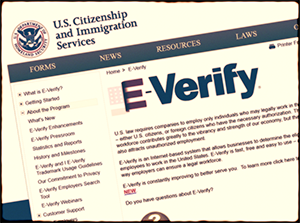 All of Washington is abuzz over the infrastructure bill that is currently being debated in the United States Senate. You may have missed an interesting August 4 vote on an amendment to that bill, however. It would have prohibited federal funding for any entity that failed to enroll in E-Verify. While 53 senators voted in favor of that amendment, it failed because 45 others (all Democrats) opposed it. Why wouldn’t they want the promised infrastructure jobs to go to legal workers?

At 2,701 pages, that bill is massive, and contains more than $1 trillion in new spending, including $550 billion for roads, bridges, internet services, and a whole grab bag of other projects. It will pass (despite serious concerns about its cost and expansion of government power); the only question is when.

On Wednesday, Sen. Jim Lankford (R-Okla.) offered the amendment in question. It would have limited the provision of federal assistance, grants, and contracts authorized by that bill to entities that have enrolled in, and are complying with, E-Verify.

As my colleague David North described that program over a decade ago:

E-Verify is a useful, massive data-base, electronic program which gives employers a chance to compare data on people they have just hired with USCIS and Social Security files. If the worker's data does not jibe with the government files, and if he or she cannot subsequently resolve any problems found, then the employer may fire the worker. The point is to keep illegal aliens from being hired.

E-Verify is effective in “keeping illegal aliens from being hired”. In a March 2016 study, researchers Pia M. Orrenius and Madeline Zavodny concluded that “having an E-Verify law reduces the number of less-educated prime-age immigrants from Mexico and Central America — immigrants who are likely to be unauthorized — living in a state.”

If E-Verify were mandatory, illegal immigration would not end overnight, but the biggest benefits of illegal entry and overstay (living and working in the United States) would be much, much harder for illegal aliens to obtain. Simply put, if you are here illegally and you can’t work, you likely aren’t going to stay.

In a December 2018 post, I explained how the president could make E-Verify mandatory through executive action. President Trump did not take me up on the offer (as my colleague Mark Krikorian noted that year, he rarely if ever discussed it) and it’s highly unlikely that Joe Biden will, either.

Common sense can be an uncommon virtue in Washington, however, and the defeat of Lankford’s E-Verify amendment is likely the best proof.

Opposing the amendment was Sen. Dick Durbin (D-Ill.), Senate majority whip and chairman of the Senate Judiciary Committee. That committee has jurisdiction over immigration laws and policy, and thus Durbin is well aware that E-Verify would undermine illegal immigration to the United States.

Of course, Durbin did not premise his opposition to the E-Verify amendment on the fact that it would drive millions of illegal immigrants out of the United States by turning off the “jobs magnet” that drew them here in the first place.

Rather, in an act of verbal legerdemain worthy of the best sophists, he explained that he was opposing it because it identified too few. Seriously, this is what he argued:

Well, I can tell you how good it is. Do you know how many illegal aliens you find when you go through E-Verify? One percent. One percent.

Given that low, 1 percent denial rate, Durbin argued that mandating E-Verify was not worth the “redtape” involved.

Anyone familiar with E-Verify could tell you that compliance with the program is no more onerous than the effort that it took for me to Google Durbin’s Senate webpage. So, unless “redtape” and a couple hundred keystrokes are equivalents, that part of the argument is the sort of straw man for which Durbin is legendary.

Plus, that 2,701-page bill is chock full of restrictions and requirements, so creating more government “redtape” is one of its biggest (but unstated) goals.

Then, there is the “one percent” part. Statista estimates that in 2021, there are approximately 153.7 million workers in the United States. In May, Forbes cited to a study estimating one in four American workers would look for new employment, post-pandemic.

That means that 38.425 million workers will be looking for jobs in the near future. One percent of that number equals 384,250 illegal aliens who, if they were vetted through E-Verify, would be denied a job.

And that is just current workers. The hundreds of thousands of aliens who have been ushered into the United States by the Biden administration during its current border crisis likely would not have been able to get the jobs promised by the infrastructure bill had Lankford’s amendment passed.

Nor would they have been able to get other jobs with any entity that will benefit in any way from that government cash, even jobs not related to the bill. To have gotten the money, as noted, those entities would have had to run E-Verify for all new employees, not just the ones seeking infrastructure jobs.

Given all of this, Lankford’s amendment could actually have helped the Biden administration gain “operational control” of the border, which as I explained in an August 5 post it is required — but is failing — to do.

Of course, part of the reason that “just” 1 percent of those who went through E-Verify were identified as illegal aliens is because illegal aliens don’t want to be identified. That means that they won’t look for jobs with an employer that uses the E-Verify system and, Durbin’s arguments notwithstanding, actually shows how effective that program is.

Had the amendment passed, all the jobs promised therein, and every job with every employer who will benefit from its gusher of funding, would have gone to an American worker.

That is likely the reason that no Republicans voted against Lankford’s amendment, and that five Democrats — Maggie Hassan (N.H.), Tim Kaine (Va.), Mark Kelly (Ariz.), Jon Ossoff (Ga.), and Raphael Warnock (Ga.) — voted for it.

Sens. Hassan, Kelly, and Warnock are up for reelection in 2022 in hotly contested races. A vote against the amendment would have been used against them in the upcoming elections. Kaine is not in cycle until 2024, but he may feel the winds of change in the Old Dominion at his back. Ossoff’s seat is safe until 2026, but he likely does not want to get too out-of-step with his constituents.

That said, 45 Democrats followed Durbin’s lead in voting against the amendment, including the pivotal Joe Manchin (W.Va.). Manchin is a “centrist” Democrat in a solidly Republican state: Donald Trump won 68.6 percent of the votes there in November.

His “nay” is a particular head-scratcher, given the fact that by voting against Lankford’s amendment, Manchin was voting in favor of allowing what are (in Durbin’s terms) “illegal aliens” to benefit from the infrastructure bill’s promised cash bonanza.

The order governing the infrastructure bill debate required 60 votes for adoption of amendments. So even though Lankford’s amendment mandating that entities benefitting from that huge spending spree use E-Verify received 53 votes, it fell seven short of passage. I can understand why every Republican and five Democrats present voted for that proposal. But I cannot fathom why 45 other Democrats voted to enable illegal aliens to get good-paying, government-funded infrastructure jobs.